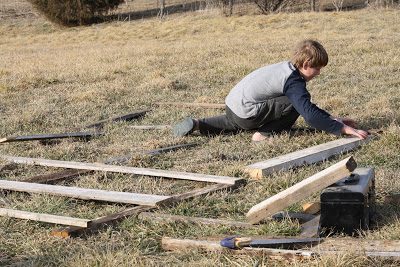 My son got struck with the notion to build himself another fort—we already have this one and this one—so he claimed a spot down below the chicken coop (yet another one of the outbuildings that pockmarks our land) and got busy.

At first he was so consumed with his work that I could hardly get him to come inside to eat his supper and at night he didn’t come in till it was dark dark. 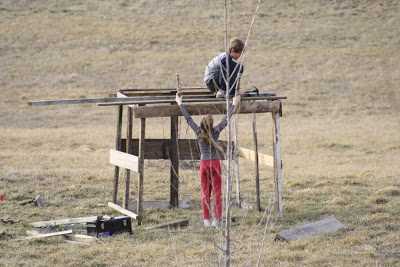 My husband’s workday is punctuated with pressing phone calls from my son.

Hi Papa. Can you pick me up ten pounds of nails?

Hi Papa. Do you have a battery-powered jig saw I can use?

Hi Papa. Do you think you could buy me a handsaw? The one I’m using doesn’t work too well.

Hi Papa. You don’t need those old stairs on the burn pile, do you?

Hi Papa. The house wrap that’s in the barn? Can I have it? 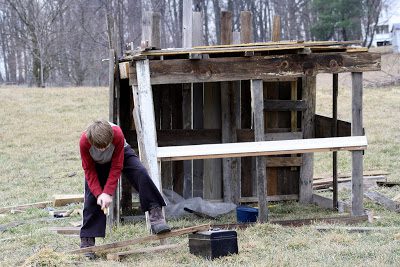 My husband comes home after work and stares down into the field at the growing monstrosity, and then he sighs, “It’s so ugly. And all those nails—I just know the field will be full of them.” 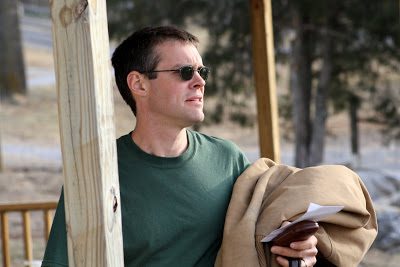 “Hon!” I chide. “They’re having fun! Who cares what it looks like! Relax.”

“Yeah, yeah, you’re right. And it is right next to the burn pile. We can just torch it when they’re done.” 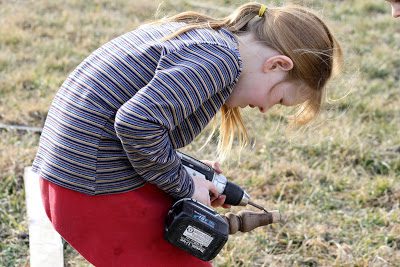 Don’t worry. It won’t get torched for quite some time. I, for one, will flaunt it while it lasts. It’s a Monument To Childhood and I’m rather fond of it. 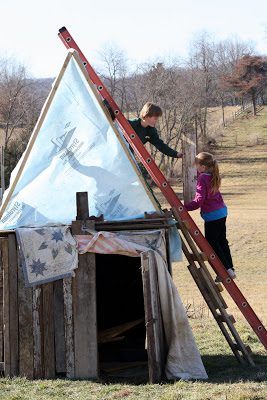 The other day I read some blog post in which a homeschooling mother admitted that she, out of deference to the public school system, doesn’t let her kids play outside till three o’clock in the afternoon. She’s afraid of what people will think if they see her kids running around during school hours. 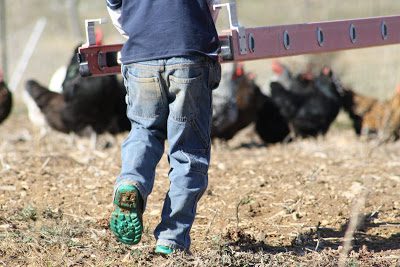 When I read that, my jaw dropped. I don’t believe that thought—to restrict my kids to the regular school schedule—has ever crossed my mind, at least not recently enough that I can remember. I mean, the whole point of homeschooling is so that my kids DON’T have to be restricted to that unnatural schedule! 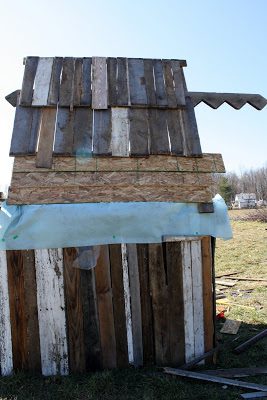 Yesterday, that blog post still fresh in my mind, I stood at the window watching and thought, Just let someone try to tell me my kids aren’t learning! Ha! Of COURSE they’re learning! It’s called math! Wha—? You don’t see a measuring tape anywhere? OPEN YOUR EYES, Doofus! Do you see the triangle? The cube? The parallel lines? They’ve done gone and BUILT themselves a freakin’ GEOMETRY lesson, for crying out loud! 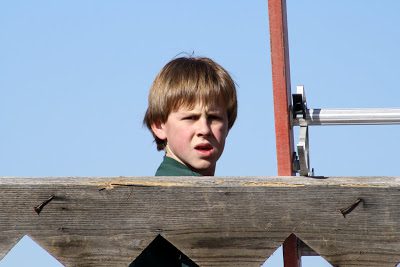 Not that I normally look at my kids zipping around the back forty on their bikes and think physics, see them collecting the eggs and deheading bugs and think biology, or watch them pull each other’s hair out and think social skills. No, no, no, not at all. I’m too busy being happy that they’re out of my house to bother with all that educational lingo-schmingo. 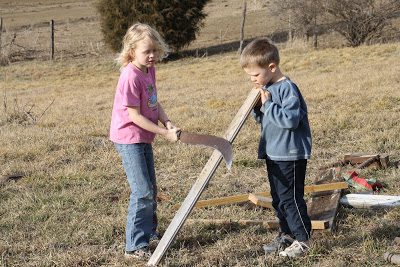 Freak-Out Prevention Alert: the littles aren’t allowed to use the machete;
I was right there, squawking at them to
put it down while I clicked away

Already, my kids’ fort has far surpassed the forts of my childhood, the little nooks we made in the freshly dumped truckload of firewood, the shady hollows tucked down under the tall evergreens. And their skill with power drills and knowledge of building procedure—the actual application of it, plus the love of it—puts them in an altogether different league than I ever was, or will be, in. I suspect that eventually less nails will be wasted, measuring tapes will actually get used, and their works of art won’t make my husband cringe and duck. 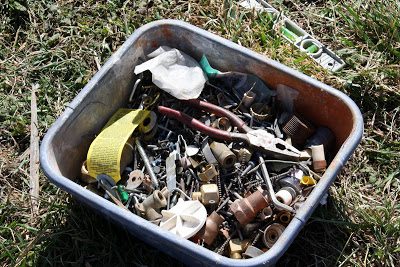 Until then, he can cringe till he has a crick in his neck, say I. The kids are playing their hearts out and there is no way I’m going to stop them. 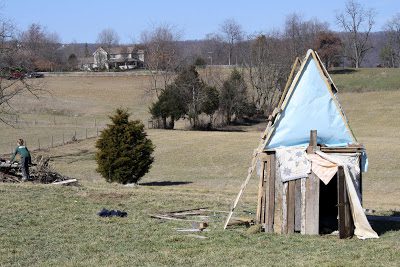 They have no plans to stop, either. I’ve heard rumors that once the second story gets under roof, a porch is next. My daughter has already dug up some ground for a flowerbed. Perhaps my husband and I will be experiencing an empty nest earlier than we anticipated? If that happens, I think a tin can telephone might be in order. 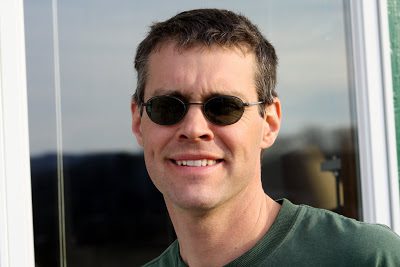 P.S. Don’t be fooled by my husband’s fussing and whining. He’s actually pleased as punch that the kids are taking such an interest in all things tool belt.