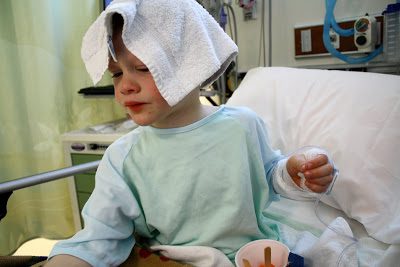 Turns out, I was a bit more anxious than I realized. I hardly slept a wink last night. I saw the clock several times each hour, sometimes more. I had two dreams that I remember. One was that I decided to wash my hair before leaving for the hospital, stuck my hair (but it was clothes) in the washing machine, and then realized that the cycle would take an hour and I wouldn’t be ready on time. The other dream was that I was in a barn, and in order to get out, I had to go by a large pig which turned into a slobbering cow that charged me and nipped my ponytail. It was a miserable night.

However, my crazy, middle-of-the-night fretting aside, the surgery went perfectly fine. The nurses made a huge to-do over Nickel, giggling at his red toenails and tweaking his cheeks while he just sat on the bed and smiled. He smiled at the anesthesiologist, he smiled at the doctor, and he smiled at the earring-sporting, lizard cap-wearing, Monty Python-quoting male nurse.

When it came time for him to walk to the OR, he wanted me to go with him. As we walked towards the OR doors, I explained I wasn’t allowed to go any further, but, Look, why don’t you push that big button over there to open the door? All right, now give me a kiss. See you later, sweetie! And off he walked, the lizard-crowned nurse at his side. Not wanting to watch him leave, I promptly spun off in the other direction. I needed coffee, and a bagel.

After an hour-plus, the doctor came out to the waiting room to give me The Report and a little sliver of tooth in a cup. After filling me in on the surgery, she informed me that Nickel walked into the OR all by himself, got up on the table and breathed right into the mask. She was quite impressed. I was relieved. I thought he’d probably do fine, but still, you never know.

When a nurse called me back into recovery, Nickel was sitting up in bed, crying.

There was a little blood in his nose and his voice sounded all raspy. He locked his arms around my neck and sobbed. I patted his back for a little and then asked him to please let go—he was choking me. 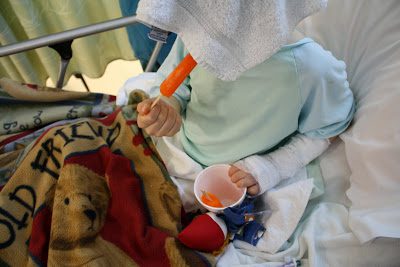 He said his forehead hurt, so we cut the lights and put a cloth over his head. 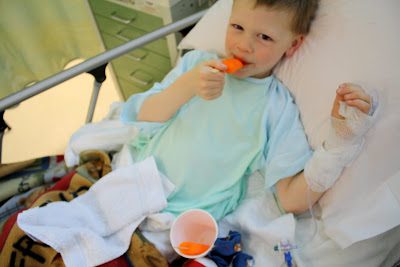 He slurped at his florescent popsicle while I knitted. 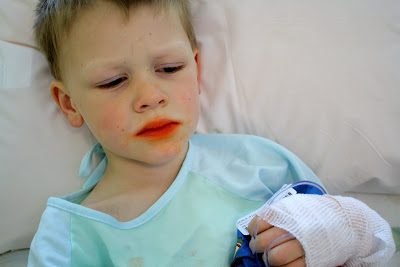 When he got grouchy about the scratchy blood pressure cuff on his ankle, I climbed up on the bed and rubbed his feet while we entertained ourselves by watching the unconscious people roll by on gurneys and listened to the other kids wake up from their surgeries (one had a hard time of it— the little guy kept holding his breath and turning gray). 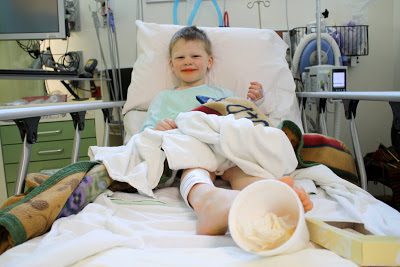 Once disconnected from wires and pressure cuff, Nickel trotted over to the nurses’ station to return the clipboard he used for coloring the pictures and to give his nurse a good-bye hug. And on our way out the door, we saw one of his check-in nurses. She beamed at him and then turned to me, her eyes wide, “I heard he walked into the OR all by himself! What a kid! Wow.”

Back home, he showed off his silver tooth to the other kids and then called his Grandmommy to fill her in on the morning’s excitement. 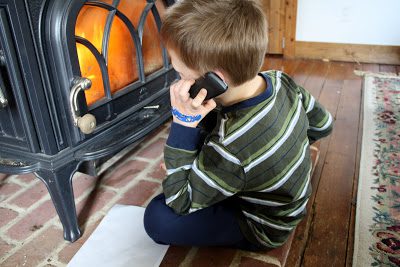 It wasn’t till lunchtime that I thought to get a mirror so he could see his shiny tooth himself. He was intrigued, and he carted the mirror to rest time so he could further study his fancy-schmancy dental work. 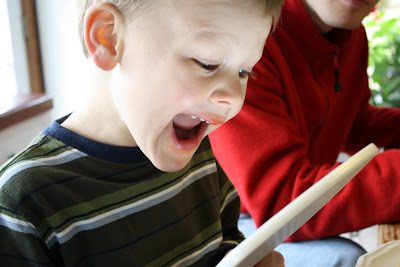 And thus concludes the case of the whomping shovel.

This same time, years previous: blondies, dunging out, my wizard mom, and what I did today