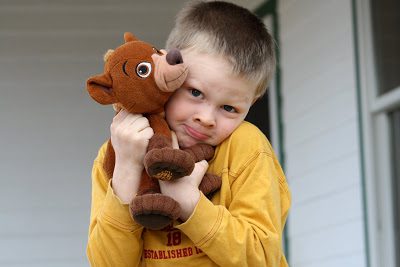 After countless phone calls, two trips to the ER, consultations with various nurse-friends and non-nurse-friends, and a hike across town to another doctor, we are totally exhausted. So tonight, instead of going to my book club, I decided to stay home in favor of an evening of dish washing, bath taking, sibling wrestling, fireside relaxing, and book reading. The activities—both the chaotic and drudge, the relaxing and fun—are blessedly, thankfully, normal.

Slowly, slowly, sloooowly I’m coming down from the cliff that mothers shoot up when doctors say things like “leaking fluid from the central nervous system” and “CAT scan” and “meningitis” and “hairline fractures.” Gradually, my insides are relaxing, my speech is slowing.

I still feel my little boy’s (‘cause it’s my little boy that took us for this spin around Wild Worry Town) forehead about six times every hour, and I continually make him turn his head to the light so I can check in his ear for leaking fluids, but he’s shaking off that horrible lethargy that made me so sick with nerves and he’s picking up speed, so it’s kind of hard to catch him long enough to lay hands on him anymore.

In other words, he’s much, much better.

What happened was this: my husband was digging a hole with a bar and the little boy was “helping” with the shovel and the shovel got in the hole and the bar came down on it and—WHAM!—the handle of the shovel leaped up and smacked the little boy upside the head, right behind his left ear and along the jaw line. He cried an awful lot.

At lunch (this was on Saturday), he didn’t want to eat. He said his tooth hurt, but he was pointing to the opposite side that got hit and everyone was fussing about the food, so I just chalked the complaint up to whiny-ness and made him eat it.

It wasn’t till supper that something he said made me check in his mouth. There was blood mixed in with his scrambled eggs and the back quadrant of his molar was split down to the gum, just like a log of wood when someone takes an ax to it but doesn’t make it the whole way through.

Our doctor said we should go to the ER, so my husband took him. The ER doctor breezed in and out, never even seeing the break. (I know this, because I called the ER the next morning to have them read me the records.)

That night, the shovel-whacked kid developed a fever and intense pain in the left ear. Medicine three different times, hot water bottles twice, and still he cried. During church (yes, I took him, socallmecrazy—I figured he was injured, not sick, and I like going to church), I noticed there was water in his ear. After Sunday school I corralled a nurse and riddled her plum-full of questions. Other people weighed in. Sick kid—I mean, injured kid—just laid there, playing the part of Pathetic to the hilt.

So back to the ER my husband went. After four more hours, a CAT scan, and lots of waiting while the doctor consulted with other doctors, they came home. We were to be on the alert for a spiking fever, so I was up for a couple hours last night with a feverish boy (103 degrees, which is not considered “spiking” in our hot-blooded family) and my runaway imagination.

Today’s ENT doctor decided we ought to treat it as an ear infection, which it is. How he got it, we can’t be sure—the slight cold he had? the trauma from the blow?—but in 24 hours I expect him to be as right as the rain that is falling this very minute.

There’s still that pesky broken tooth to take care of. So tomorrow we’re off to see the dentist, wheee!

This same time, years previous: the morning after