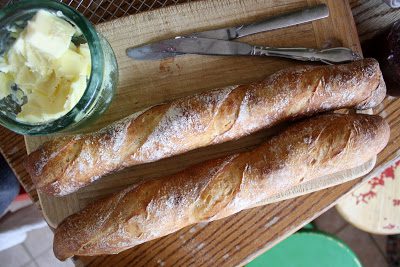 In our house, twenty eleven started off with a bang. That morning I baked, for the first time ever in my whole entire life, a real baguette.

Actually, I baked six of them.

I had to keep pinching myself to make sure it was for real. I jumped up and down. I ate a whole one (and then some) for breakfast. I broke off hunks of bread for the kids. I called Mr. Handsome in from the barn to show him the loaves. Then I ran out to the barn with some fresh, buttered bread and made him get out from under his truck where he was changing the oil (or something) to eat it. He didn’t complain. All six loaves were gone in less than 12 hours. 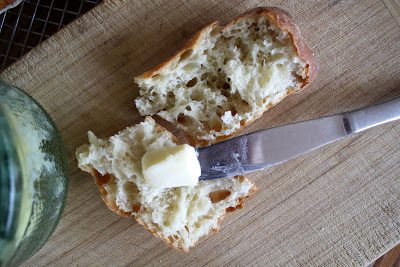 What is a real baguette, you ask? I’ve never been to France and I’ve never trained in any cooking school, but even so, I know this is the real thing. I just know! The loaves are long and skinny, caramel-brown on the outside, crackle-y, crispy. The insides are chewy and riddled with holes of all shapes and sizes. Finally I can understand those pictures of French people riding home with skinny wands of bread strapped to the backs of their bikes. These baguettes are solid and indestructible (wait a couple days and you have a homemade baseball bat), yet, they’re still ethereally delicious. (There’s analogy there—the most earthy things take you the highest, perhaps?—just waiting to be expounded upon. Go for it.)

I learned about this bread at our church’s Christmas breakfast. I noticed the huge basket filled with little slices of French bread, but thinking they were some store-purchased offering, I passed them by. But then my friend MAC came bounding up to my table, took one look at my plate and exclaimed indignantly, “What? You didn’t get any of my bread?” In no time at all she had enlightened me on the wonders of her real French bread and we were weaving through the tables on our way back to the buffet line so I could amend the errors of my ways. One bite of her bread and my eyes rolled back in my head. “What—? How—?”

MAC didn’t need any prompting. She launched directly into The Tale of The Bread and then left me alone to fill my plate and return to my seat. I made several trips back for more, and I even got kind of evangelical about it, putting little slices on other people’s plates and proclaiming, “Eat!”

MAC promptly sent me the recipe via email, and after a flurry of questions, a couple phone calls, and a trip to the grocery store, I got down to business. And what a profitable business it has been! 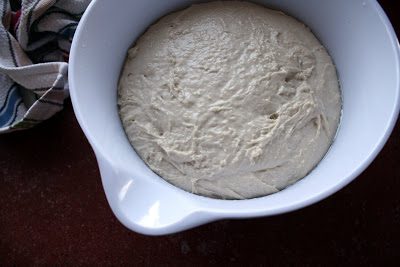 Here’s the gist. Before going to bed at night, mix up flour, water, salt, and rapid rise instant yeast (what I had to go to the store for). It can even be no-knead if you have a Kitchen Aid—just six minutes in the machine and you’re done. Let the dough ferment in the fridge over night. In the ayem, move it to the kitchen counter and let it rest for a couple hours. 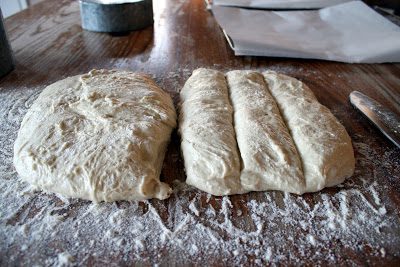 Then, crank up the oven to 500 degrees, and shape the baguettes and promptly bake them—there is no need for a second rising. 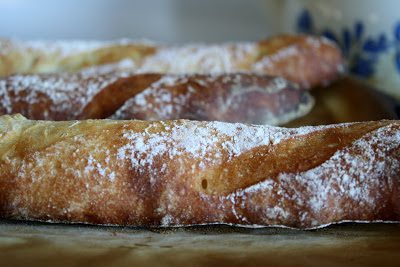 So basically, if you get up by six, you can have fresh baguettes and coffee for a late breakfast or mid-morning snack. Be still my beating heart! 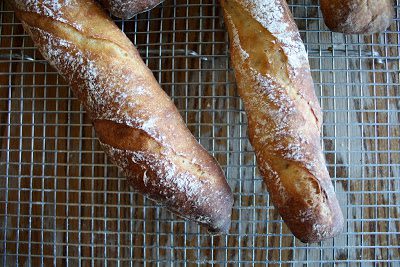 Bread is my food. Some people like meat. Some people like potatoes. Some people like chocolate. For me, though, if I had to chose one comfort food, it would be bread. And not just any bread, either. It must be substantial, like a tangy sourdough or a chewy baguette. Served with lots of butter and cup of steaming coffee. Oh my.

Who’s with me on this one? Anyone? Or do I have to stand alone atop my yeasty mountain of bliss? 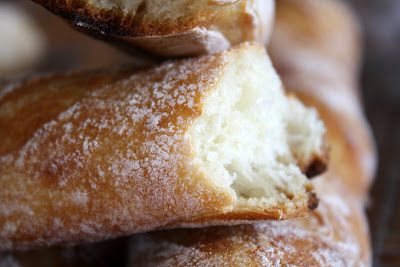 If bread isn’t your first choice, then tell me this: if you could choose the one food that soothes your spirit and comforts your soul, what would it be? 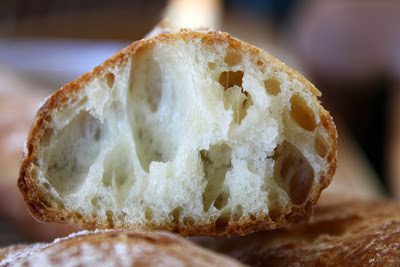 Baguettes
Adapted from my girlfriend’s recipe which she, in turn, got from Peter Reinhart’s The Bread Baker’s Apprentice

The original recipe called for 2 1/4 teaspoons salt, but I found it a bit bland. Three teaspoons did the trick—adjust to suit your tastes.

They say this dough can be shaped into all sorts of delectables—large artisan loaves, bâtards (bastardized baguettes, short and fat), pizza crust, rolls, etc. As for me, though, I’m sticking with baguettes for now. Can’t get enough of ’em.

Dump all the ingredients into the bowl of your Kitchen Aid mixer and mix it (with the bread attachment, of course) for six minutes. Or, if bulky machines aren’t your thing, stir it up with a spoon and then knead by hand. (Clue: in the mixer, the dough should be dry enough that it pulls away from the sides of the bowl, but yet wet enough that it sticks to the bottom.)

Transfer the dough to a lightly greased bowl, cover with plastic wrap, and pop it in the fridge.

The next morning, move the bowl from fridge to counter and let it to sit for another 2-3 hours.

Oven Prep
Before you shape your bread, get your oven ready. 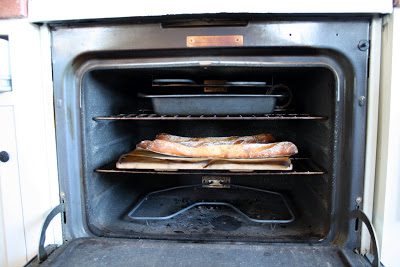 Put one of the racks on the very highest level. This rack will hold a pan of boiling water. Set the water to boiling on the stove top and then, a couple minutes before putting the bread in the oven, pour the water into the pan and slip it in to the oven. Replenish the steam pan with more boiling water as necessary. 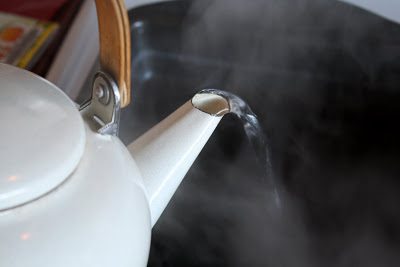 As for baking the bread, there are a variety of ways to do this. Here are two:

a) Put the shaped loaves on an upside down cookie sheet and bake it on the next to bottom rack.

b) Put a baking stone on the next to bottom rack and allow it to heat up with the oven—get it really good and hot. Put the shaped loaves on a parchment-lined, side-less tray. When ready to bake, pull the hot stone from the oven, slide the loaves and paper onto it, and return the stone to the oven.

Shaping the baguettes
Using a rubber spatula that you dipped in water (to keep it from sticking to the dough), gently scrape the dough out onto a well-floured surface. Using your fingers, gently lift and adjust the dough so it makes a small rectangle, about 8 x 6 inches. Now, using a knife, cut the dough in half and then each half in three rods. You’re making baguettes so cut accordingly. There’s no point in cutting the dough into triangles or squares when you’re going for long skinny rectangles. Be lazy! 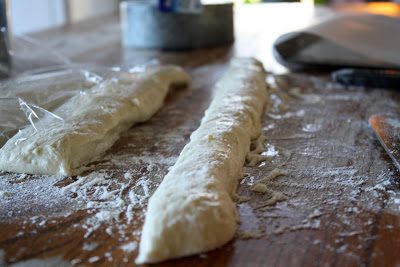 Now, very gently, lift and stretch the dough to make a long baguette—make it as long as your baking stone or cookie sheet. Use flour to keep the dough from sticking to your fingers, but do not knead or roll the dough. You want to keep as many air bubbles in it as necessary. Lift the shaped baguette onto the cookie sheets. Repeat with two more pieces of dough. (Cover the other dough and wait to shape it till it till the first three loaves are in the oven.) Dust the loaves with flour and then score with a sharp knife. Cover the baguettes with plastic wrap and let them rest for 5 or 10 minutes. Or not. As soon as the oven is ready, the baguettes can be baked. 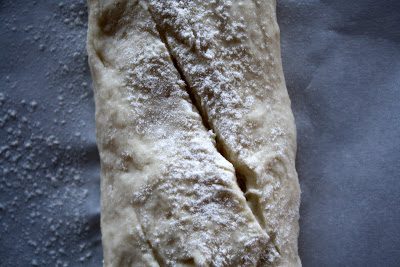 Baking
Put the bread into the preheated, 500 degree, steaming hot oven. Immediately, spritz the sides of the oven with a water bottle. Two and a half minutes later, do it again. Another two and a half minutes, spray again. Close the oven door and do not disturb for 8 minutes, at which point, turn the oven down to 475, rotate the bread, and bake for another 10-15 minutes. Aim for a total of 23-25 minutes and a burnished crust that verges on black in some places. Of course, the exact time and temperature will depend on your oven, pans, size of loaves, etc. Experiment. 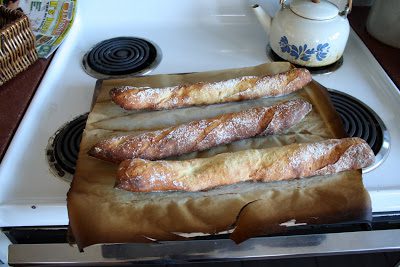 Transfer the baguettes to a cooling rack, crank up the oven, and repeat the process for the remaining three baguettes.

Store the baguettes at room temperature. Partially eaten baguettes can be stored in a towel to prevent them from getting stale too fast. But the truth is, after one day, baguettes fade tremendously. They can be stored in a plastic bag, but their crusts turn soft (which might be a plus for some people). They can be frozen and reheated in the oven (but I have yet to try it). Dry bread can always be used as French toast, croutons, etc.