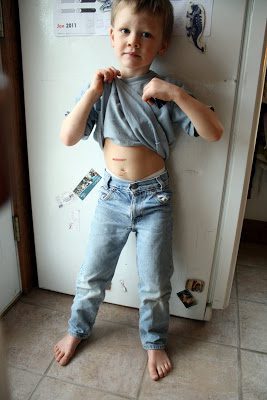 Sunday afternoon, Francie, our 60-plus pound lab, had a head-on collision with my kneecap. She was running at top speeds—until suddenly she wasn’t. And I was spinning around like a top, clutching my leg and feeling tingly cold and burny hot all over. I didn’t want to look down for fear my kneecap had fallen into my sock. It was just a bruise, however, and not even a very big one at that, but three days later I’m still sore.

Then the next night, the Baby Nickel belly-kissed the stove. It was the weirdest thing. He was warming up by the wood stove after his bath, tired and grumpy after a long day and no nap. He asked Mr. Handsome to help him get dressed, and Mr. Handsome, busy on finances, told him no, Dress your own self, boy. The Baby Nickel turned bratty and demanding, hollering at the top of his lungs that he must be helped right that very minute. So Mr. Handsome helped him by relocating him to a timeout in the downstairs bedroom. Nickel was mad as a hornet.

Eventually he turned weepy-sad, and Mr. Handsome paid him a visit. But Nickel refused to work things out, sobbing that he wanted Mama. However, I was busy. So the girls took turns checking on him, trying to cheer him up. All to no avail. The poor kid was exhausted.

After he had been in the room for a good twenty minutes, I finally went in to see him. He was curled up on the sofa, still naked, tears streaming down his face. I told him to sit up (couldn’t very well hug him while he was fused to the cushions), and as he slowly, shakily, sat up, I caught a glimpse of some scratch marks on his belly. Then—oh my word! “John! Come here!”

There were burns on his tummy, one big, one tiny, but both puffy-angry.

It was freaky, I tell you. A burn that big and he never said a word? Never even cried his hurt cry?

We quizzed him and gradually learned that a) no, no one had pushed him against the stove, he had just gotten too close; b) yes, it hurt; and c) no, he didn’t know why he didn’t tell us. (And no, we don’t think he was afraid to tell us—he’s not that kind of kid.)

“Which hurt worse?” I asked. “The burn you got on your finger or this one?”

Well, okay. At least he correctly identified the worse burn, pain-wise. Because I was beginning to wonder if he was missing some nerve endings.

In retrospect, I think he was not fully aware of what had happened—it’s the only explanation I can come up with.

Normally I don’t feel too bad when my kids get hurt. I don’t take responsibility for their bumps and ouchies.

You fell down? Well, shoot! Get back up!

The chicken pecked your hand? Don’t put your hand in front of its face then, silly.

You fell out of your chair and landed smack on your back? Well, if you’d minded your manners and kept your butt on your seat, you probably wouldn’t be lying there crying right now.

Your sister whacked you? Don’t provoke her. (Dummy.)

But this time I felt awful. A burn that bad? If it were me, I would be having histrionics, calling up all my friends in a quest for sympathy. I had a little burn on my thumb the other day and it hurt. I yelled and my eyes watered, and then I had to keep working around the heat (didn’t want the food to burn, too) and lost half the enamel on my teeth from gritting them so hard.

Maybe tummies and thumbs feel pain differently? Maybe I’m a wimp and the Baby Nickel is stoic? Maybe I should change his blog name to (deep, gravely voice) The Bruiser.

After Mr. Handsome and I got done staring and grilling him (sorry, bad pun), we snapped shut our slack jaws and started oozing some serious sweetness. We helped him into his jammies, gave him Tylenol, and applied medicine and a loose bandage. In short order, he was all teary-eyed smiles and cuddles (though he refused an offer to be carried up to bed, preferring to walk himself, both hands holding his shirt away from his wound).

By the next morning an outsider would never have known he was burned. He even wore blue jeans. Ouch.

But enough of that. I’m sure you’re dying to learn how I, Miss Wimpy, got burned. 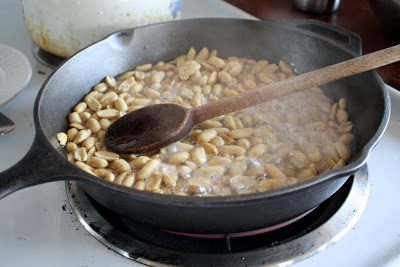 It was while making my second batch of candied peanuts, one of my latest passions. One of the super-hot candied peanuts jumped out of the pan, and in a classic dumb cook move, I used my fingers (stupid stupid stupid) to pick it up and toss it back in. What followed, the desperate effort to pry off the hardened sugar-syrup with my teeth, the yowls and wails, was to be expected. The bigger surprise was that I, a cook who has never successfully made candied nuts (aside from cashew brittle), had hit a home run for the second time in a row. 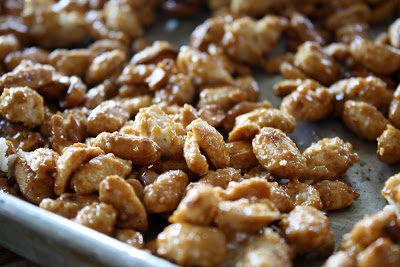 Crunchy-sweet and mildly salty, these nuts are the way to go. Over the past couple weeks, and with only minimal help from the members of my immediate family, I’ve managed to tear through two whole pounds. The funny thing is, the kids love them but Mr. Handsome doesn’t. I’m not sure why, and I don’t even really care. It’s his loss.

So far I’ve made these nuts plain, with just sugar, water, and salt. The second time around I added some ground cinnamon which was lovely, though I wish I’d added more. I’m already making plans for the next batch: ground cinnamon and chipotle powder. 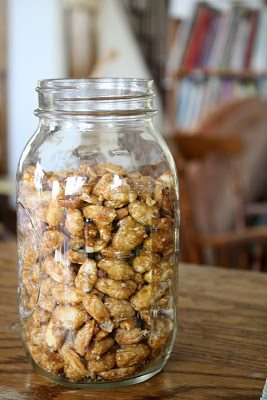 Feeling timid, I used only a couple small pinches of cinnamon. Next time I’ll use at least a quarter teaspoon.

Other nuts can be used, though I have yet to try them. Smooth ones are best, says David, for coatability. So if you want to experiment, try whole almonds, macadamias, or cashews.

Dump the peanuts, sugar, and water in a cast-iron skillet or heavy-bottomed saucepan. Crank the heat up and start stirring. 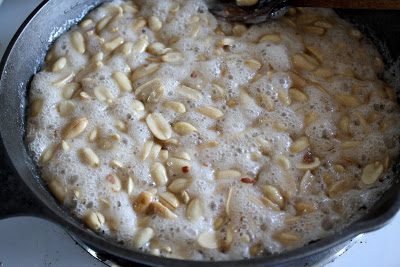 The sugar and water will make a nice syrup, but all the time the water will be evaporating. 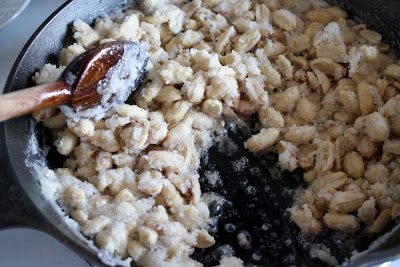 Quite suddenly, the sugar-water will turn to sugar-sand. Reduce the heat to medium and lift the pan off the burner to help it cool a bit. Stir constantly.

Alternate between setting the pan on the burner and taking it off—if the nuts are browning too quickly, take it off; not enough color, put it back on. The goal is to get them a nice golden brown, as dark as you can without scorching.

If a nut jumps out of the pan DO NOT PICK IT UP.

Soon after the sugar turns to sand, a little syrup will start to form on the bottom of the pan. Stir frantically, trying to coat all the nuts with that syrup. With about a minute of stove-time left, sprinkle in your salt and any other spices. (It’s good to have them pre-measured because at that point you’ll be moving really, really fast.)

When you can no longer keep the nuts in the pan without them burning, dump them onto an ungreased cookie sheet. Let them rest for 5-10 minutes before breaking them up into pieces. Let them cool all the way before storing in a glass jar.

Yield: a scant quart (if you don’t snitch any while they’re cooling)