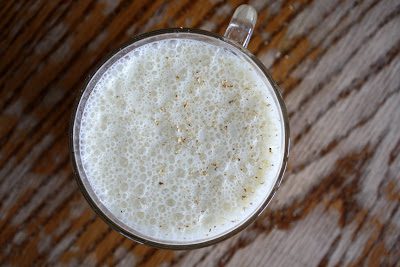 Seeing as it’s the last day of the year I suppose I should do a recap of my favorite books or blogs, recall my best memories or the things I learned, or itemize the ways in which my body has aged. Or maybe I should tell you all the things I plan to do differently in the upcoming year.

But I don’t wanna. It’s not that I’m not introspective because I am (or can be). It’s because I don’t like anything to dictate when I ought to do something. In other words, if I want to tell my mom I love her and think she’s awesome, I’ll do it, and not just because it’s Mother’s Day. (Hey Mom! I love you and think you’re awesome!) If I want to tell the pastor I appreciate her, I’ll make her a loaf of bread and write a note, but it might not be during the scheduled pastor-appreciation month. If I want to roast a turkey, I’ll do it, though it just might not be on November’s Fourth Thursday.

This makes me sound contrary and rebellious, which I’m not. (I don’t think.) I just like to do things when they are meaningful to me. Perhaps it would do me good to be more introspective at the appropriate times. Maybe if I let myself (forced myself) to follow the customs I would get more out of life. Maybe it would be a good discipline.

On the other hand, my kids discipline me on a regular basis. I’ve been subject to their demands/needs/wants for so long that I crave autonomy. (That I was this way pre-motherhood is something I’m choosing not to dwell on right now.)

Anyway, I assumed that for New Year’s this year we would have a nice supper of leftover Christmas Eve cheeses and crackers, and then we’d all go to bed. But then I read this invigorating post by Aimee over at Simple Bites and started thinking that I might like to throw a party. It even occurred to me that we could keep it a secret from the kids—tell guests to arrive at 9 after the kids are in bed and then have our very own, adult-only shindig. (My mother thought the idea absurd.)

But then I asked Mr. Handsome what he thought about having a bunch of friends over. He was nonplused. “It’d be so much work,” he said.

“True, but after we have people over, you always feel great about it,” I pushed.

“Yeah, you’re probably right,” he said, sighing heavily. “Go ahead and do what you want.”

“I’m not doing it if you’re not on board,” I retorted.

That was pretty much the end of the discussion. Because when it came down to it, I didn’t really want to up the ante on our relaxed week any more than he did. And it was clear that my husband was having some much needed alone time in his barn and really didn’t need to have me put a wrench in it. To top it off, I’m rather fond of full nights of sleep. All boring reasons, but true.

In any case, party or no, tonight you need eggnog.

Yes, you do. Don’t even try to argue with me.

I made eggnog for the first time ever on Christmas eve and it was a huge hit. We’re going for round two tonight.

I must confess that weird drinks make me a little queasy, and I’ve always considered eggnog to be on the weird side. Raw egg, ugh—gag me with a Volkswagen. I developed this aversion when I was living in Central America and got served some pretty wicked concoctions, cornmeal drinks and such. On one particular occasion when we were out in the Guatemalan bush, I ungratefully poured my hostess’s prized offering through the cracks in the wooden floorboards when no one was looking. Then I had to ignore my husband’s horrified expression while acting like it was a total coincidence that the family pigs (which were—oh darn!—sheltered under the house) were having a heyday directly under my butt.

You will not want to dump this drink in between the floorboards or anywhere else but down your throat. I promise. 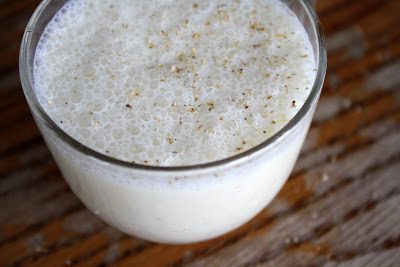 Lots of eggnog recipes call for raw eggs and whipped egg whites, and while I’ve never actually tried them (and in all probability would probably like them) (I just said “probable” two times in one phrase—that’s bad), I think I’ll stick with this moderate, but oh-so-creamy-and-delicious, cooked-egg version. Basically, it’s just like the mix for homemade ice cream, but with more milk than cream. The spices make the tongue dance, and the rum (my favorite) takes it to higher heights.

I made the mix again this morning (it’s chilling in the fridge) and Mr. Handsome and I will be sipping it tonight while sitting in front of the fire, our eyes propped open with toothpicks. Happy New Year! 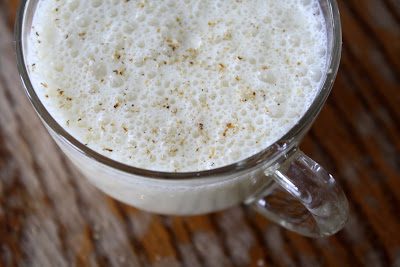 Set three of the egg whites aside and use them to make marshmallows to go with the hot chocolate that some people might prefer.

This recipe is plenty rich. I think it’d be good with just three cups of whole raw milk or with half-and-half in place of the cream (which I did today on my second go-round).

Also, I want to try this recipe as an ice cream. For that I’d swap the cream and milk proportions.

Also, I read a comment somewhere that suggested using this mix in a latte. I’m eager to try it—half coffee, half eggnog, with some Kahlua thrown in for extra yums.

Beat the yolks till creamy and fluffy. Add the sugar and beat some more.

Put the milk/cream, cloves, and cinnamon in a saucepan and heat it up till nice and hot, but not boiling.

Temper the eggs with the hot milk by slowly adding about a cup of the hot milk to the egg mixture while whisking steadily. Pour the tempered eggs into the saucepan and continue to heat on medium-high heat till slightly thickened. Again, do not boil. Strain the mixture and set it aside to cool. After an hour, add the nutmeg and vanilla and transfer to the refrigerator.

Serve the chilled eggnog in mugs, a light flurry of nutmeg for garnish and bottles of liquor on hand for spiking.

This same time, years previous: in which I throw my bread on the floor and stomp on it, parents ARE teachers, and delight