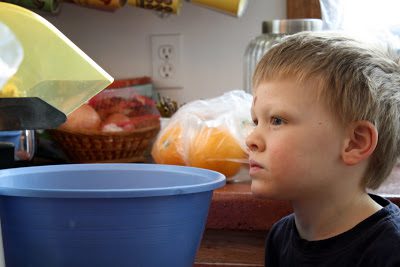 This is my littlest, my youngest, my seca leche.

Yes, I realize he’s enormous for his four years, but he’s still a baby in my eyes. 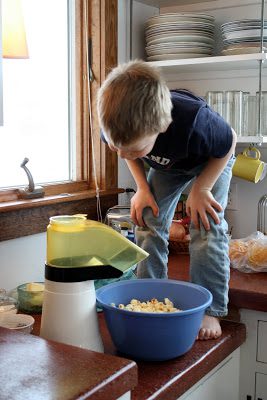 Just today when we were watching the episode of I Love Lucy in which Lucy dreams she goes to Scotland where she gets captured by the townsfolk, falls in love with her prison guard (Ricky) who then feeds her to a two-headed dragon (Ethel and Fred), my little baby climbed up into my lap, lower lip a-tremble, wrapped his arms around my neck, and buried his face in my shoulder. I laughed at him. And then I covered his neck and cheeks with a flurry of kisses.

It’s odd how your youngest child, no matter what age, has the sweetest and softest skin but as soon as you have another, fresher babe, the older child’s skin suddenly feels all grown-up, scabby, stinky, and sticky. I remember noticing this when Nickel was born. Rosy little Sweetsie (who was just turning two that month) no longer felt nearly so sweet and tender.

When Yo-Yo was Nickel’s age, he was already the oldest of three. In my eyes, he was a full-grown big kid with no traces of sweet baby soft left on him.

But Nickel’s stinky, rough, nicked-up skin will always feel soft as peaches to me. As the last inhabitant of my womb, he is doomed to be my baby for forevermore and beyond.

And let me tell you, no child was ever better suited for the role. He is a Mama’s Boy like none other, going out of his way to kiss me smack-dab on the lips and brush his eyelashes against my cheeks for bedtime butterfly kisses. He curls up in my lap like a baby, pats my cheeks, and strokes the soft skin under my chin (which drives me nuts because that skin does not need any help getting more pliable and stretchy). In fact, he smothers me with so much hands-on loving (right now he’s laying on the floor playing with my feet, hoisting them up in the air, pulling, pushing, making it nearly impossible to work the keyboard) that at least once a day I find myself on the verge of a panic attack, shrugging him off, gasping for air, and pleading (in good moments) or bellowing (in bad) for him to stop touching me NOW!

Sometimes, in the middle of nothing, he’ll burst forth with a heartfelt “I love you, Mama.” It makes me melt every time. 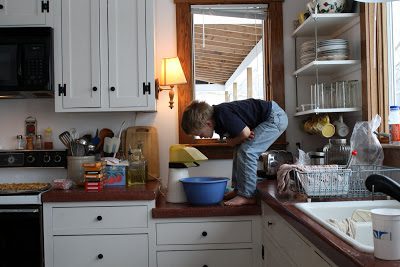 He has an unabashed zest for life, this child of mine. For example, at our church the kids are sometimes called upon to collect the offering—to just wander the isles and, when an adult flashes cash, to take it and walk it up to the baskets that sit up front. Nickel treats this venture like a full-contact sport, crouching down low, jutting his elbows out, and then zigzagging at top speed towards the prize. When Nickel collects the offering, I feel like I’m sitting in bleachers in a stadium instead of in a sanctuary.

While he has inflicted me with a fair number of head-butts and elbow jabs, more often than not it is Nickel that bears the brunt of his own intensity. 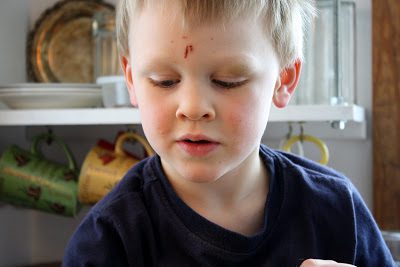 Look at that scratch on his forehead. None of us knows from where it came but it’s big and scabby and makes a pretty loud statement. Which is: I AM A BRUISER. WATCH OUT.

Check out his left eyelid. See how it’s swollen and bluish green? Something happened—again, we’re not sure what—but that mark didn’t materialize out of thin air. 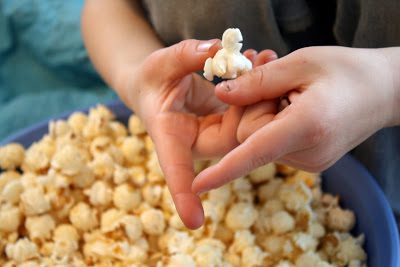 And look at that gnarly thumbnail. It’s the new one, a huge improvement over the old—the one he took a hammer to.

Forgive him his too-small jeans. You can’t tell from the picture, but they are so tight that they give him full-time wedge-y love. Every time he goes to the bathroom, he has to get me to snap them shut. It makes me feel bloated and fat just to look at him.

P.S. This popcorn was made for the purpose of prettying up the tree. But when I went to thread the needles, I realized that I had none and the ones that Miss Beccaboo brought down from her room had such small eyes that they were impossible to thread. Only two needles got successfully threaded, and then I poked the butt end of ones of the needles into my thumb and, a few kernels later, the pointy end pierced my finger. Then I quit.