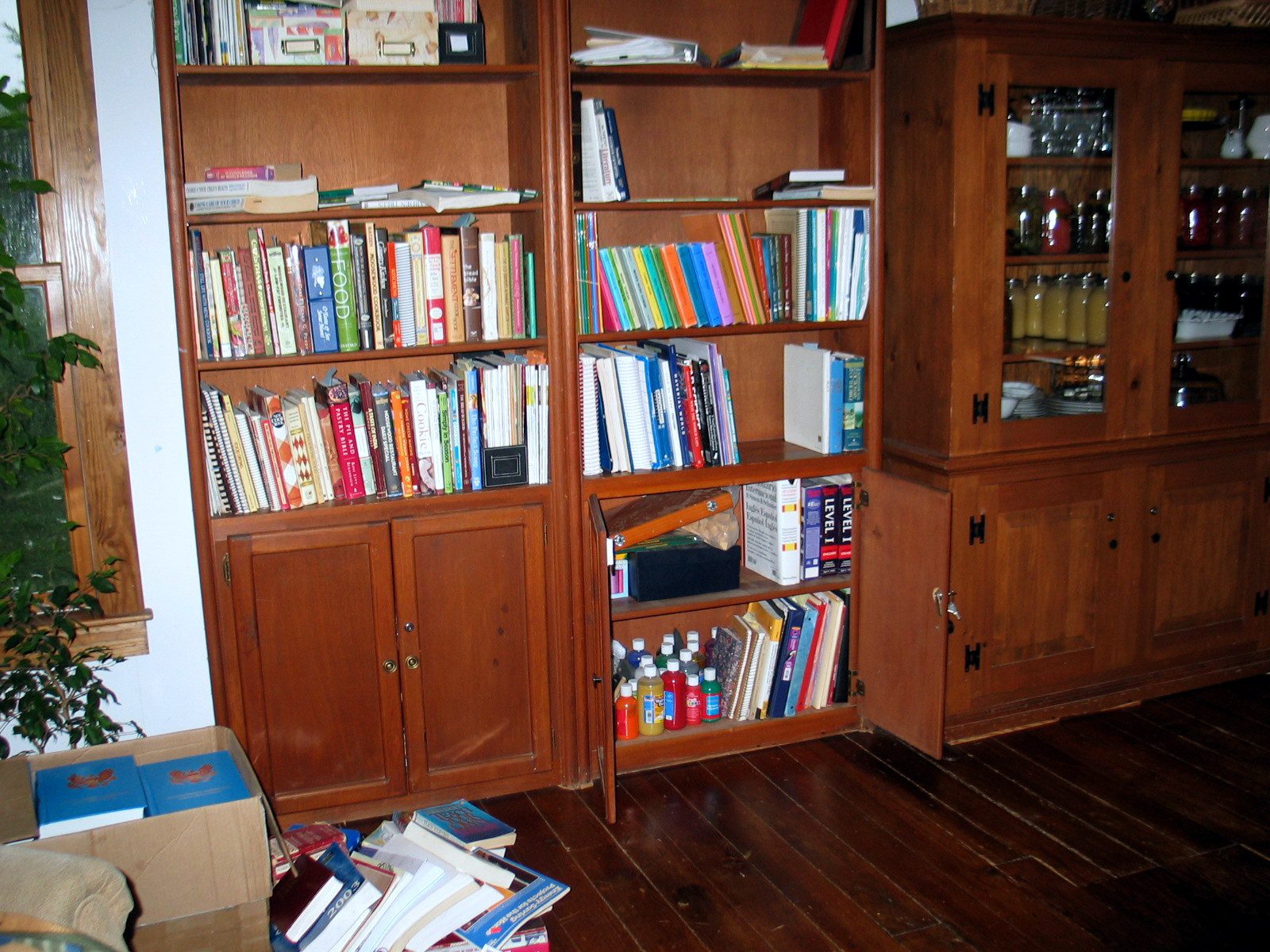 Point One: Something Weird
Two days ago I was totally opposed to the idea of starting school lesson. Totally opposed to it, as in, IT’S FREAKIN’ CRAZY TO START SCHOOL IN AUGUST WHEN THERE ARE STILL TOMATOES ON THE VINE (not on mine, necessarily, but on somebody’s, I’m sure) AND KIDS IN BARE FEET AND WHIRRING FANS AND THE POOL’S OPEN AND WE’RE EATING CORN ON THE COB FOR SUPPER AND THE PEARS HAVEN’T EVEN COME IN YET!

But then Tuesday came. It arrived rainy, overcast, and cold. “Cold” as is I shut windows and wore a sweat shirt over my all-day-long pajamas and shivered and baked things and then left the oven door open to warm the house. My kids thought they were turning into popsicles and went about wearing four t-shirts and two pairs of sweats each. I kid you not.

And then something weird happened: I got The Back-To-School Bug. I stood there in my layered clothes and stared at my messy bookshelves (that are totally non-aesthetically pleasing but I don’t care because they get the job done and at this point in my life I’ve become more utilitarian that decorarian) and then I de-booked the shelves. I boxed up unused books (kind of—there’s still a large pile in the middle of the living room floor), trashed old workbooks, brought front-and-center the new, prettied up the baskets of art supplies, added missing supplies to my shopping list, and created a rainy-day or for-when-boredom-strikes basket and before I knew it, I was browsing some homeschool catalogues, picking out titles of books to borrow from the library and had labeled a folder “lesson plans.” 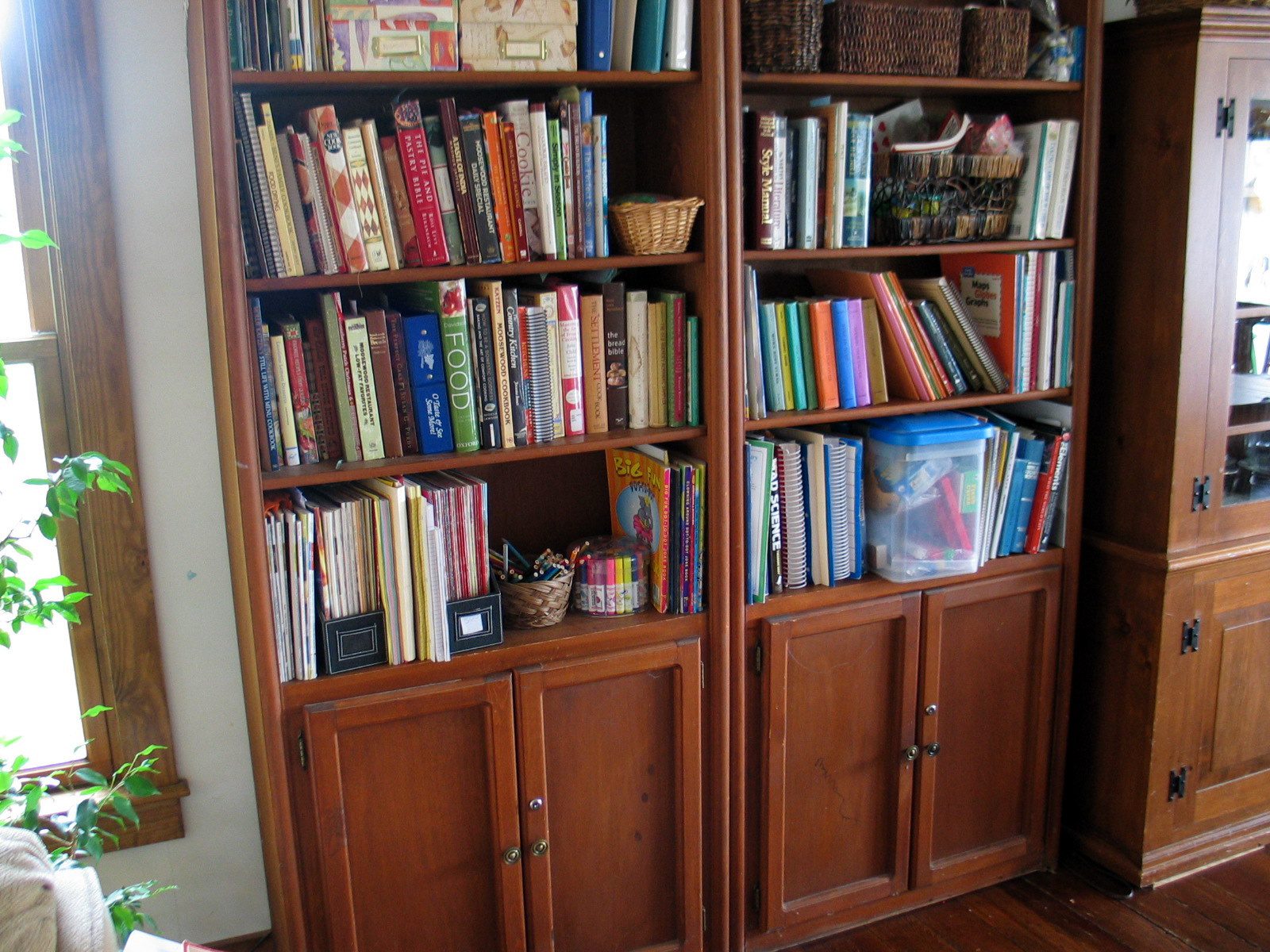 It was all so surreal that I felt like I had to walk around myself on tippy-toe.

It’s still overcast today, and I’m still in my pajamas. I weighed the pros and cons of whether or not I should switch gears (from summer to fall, you know) this week or next. Or the next. If I decided to start lessons, say tomorrow, would I regret it, say, tomorrow? Was an August start foolhardy? Would I regret it if I waited for a month? Was there anything else I should be doing? (Note: all my dilemma-ing was centered around moi and none of it around the kids or, heaven forbid, about the actual learning part of the equation.)

While continuing my internal debate, I sat Yo-Yo down and discussed what his school schedule might look like; he was receptive. Then I decided chocolate cupcakes might help to smooth out the transition (that I hadn’t yet decided I’d make), so I baked a batch. Then at lunch, the cupcakes cooling on the counter, I announced to the kids that the next day we’d start lessons—tonight we’d eat cupcakes and tell Papa all our plans. They groaned, loudly, but the corners of their lips flirted with smiles. I saw.

I won’t bore you with all the little details of our lesson plans, mostly because there aren’t many and because I might suddenly feel embarrassed because I cover subjects with broad sweeping strokes like“history” and “reading,” none of this “consonant blend” and “the modern age from 1850-2000″ stuff. I keep things vague and simple. I like to think it’s because it leaves space for all kinds of possibilities but it’s really because I don’t know enough to be specific. Don’t tell anyone, ‘kay?

(Mr. Handsome is relieved, both audibly and visibly, when he sees me making moves to provide a little learning structure for our precious progeny. I think he harbors deep dark fears that our kids will grow up to be broom pushers because their mother was soooo laid back.

Come to think of it, if they do become broom pushers, they’ll be mighty good ones since I’ve been coaching them in the Art of Broom Pushing. Porch-sweeping has dominated our August like you wouldn’t believe.)

She made this herself. 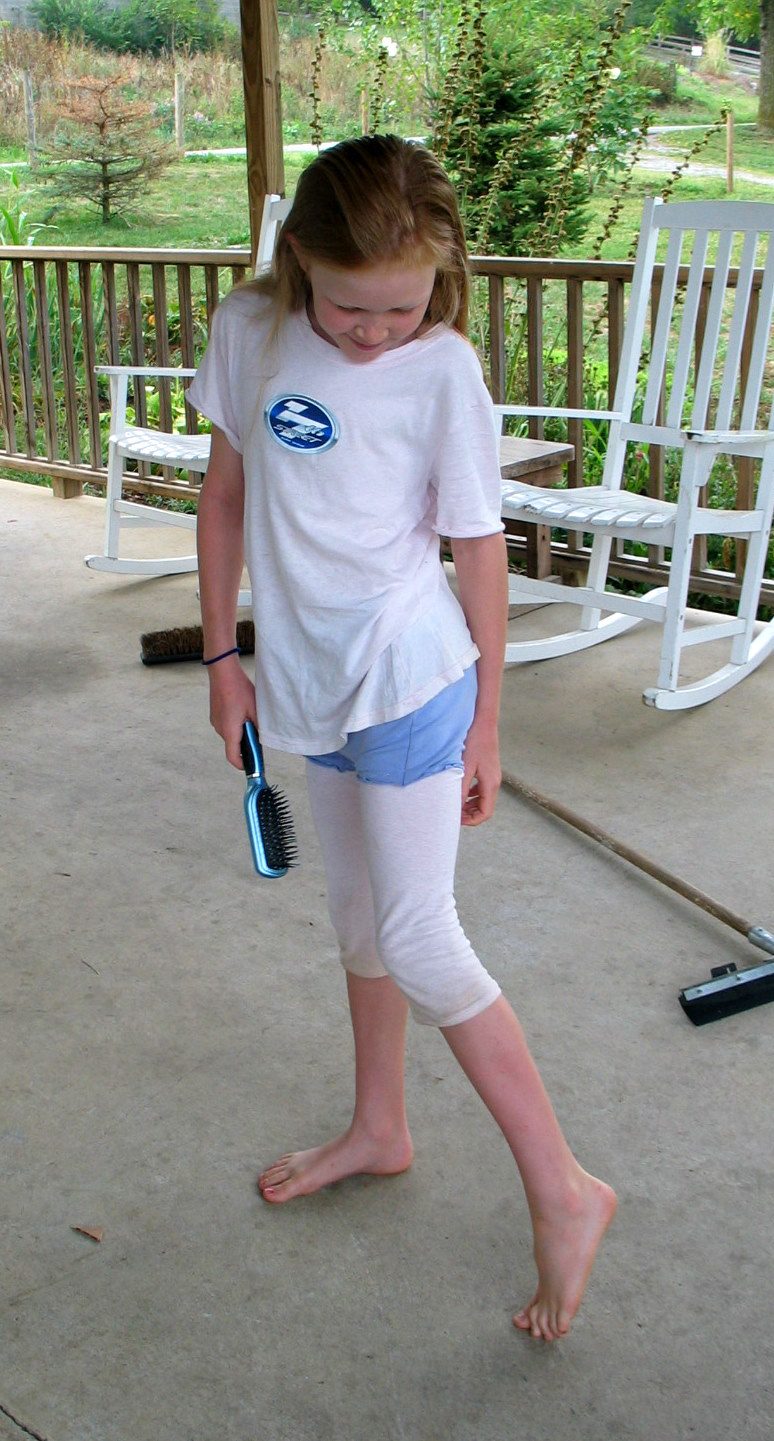 Yesterday (without permission, but I forgave her her trespasses this once) she cut off her pant legs to make shorts and cut off the sleeves of one of her shirts. She then put the shirt sleeves on her legs for leggings (though I don’t think she knows enough to call them leggings). First thing this morning, she sewed the sleeves-turned-leggings to her pants-turned-shorts. 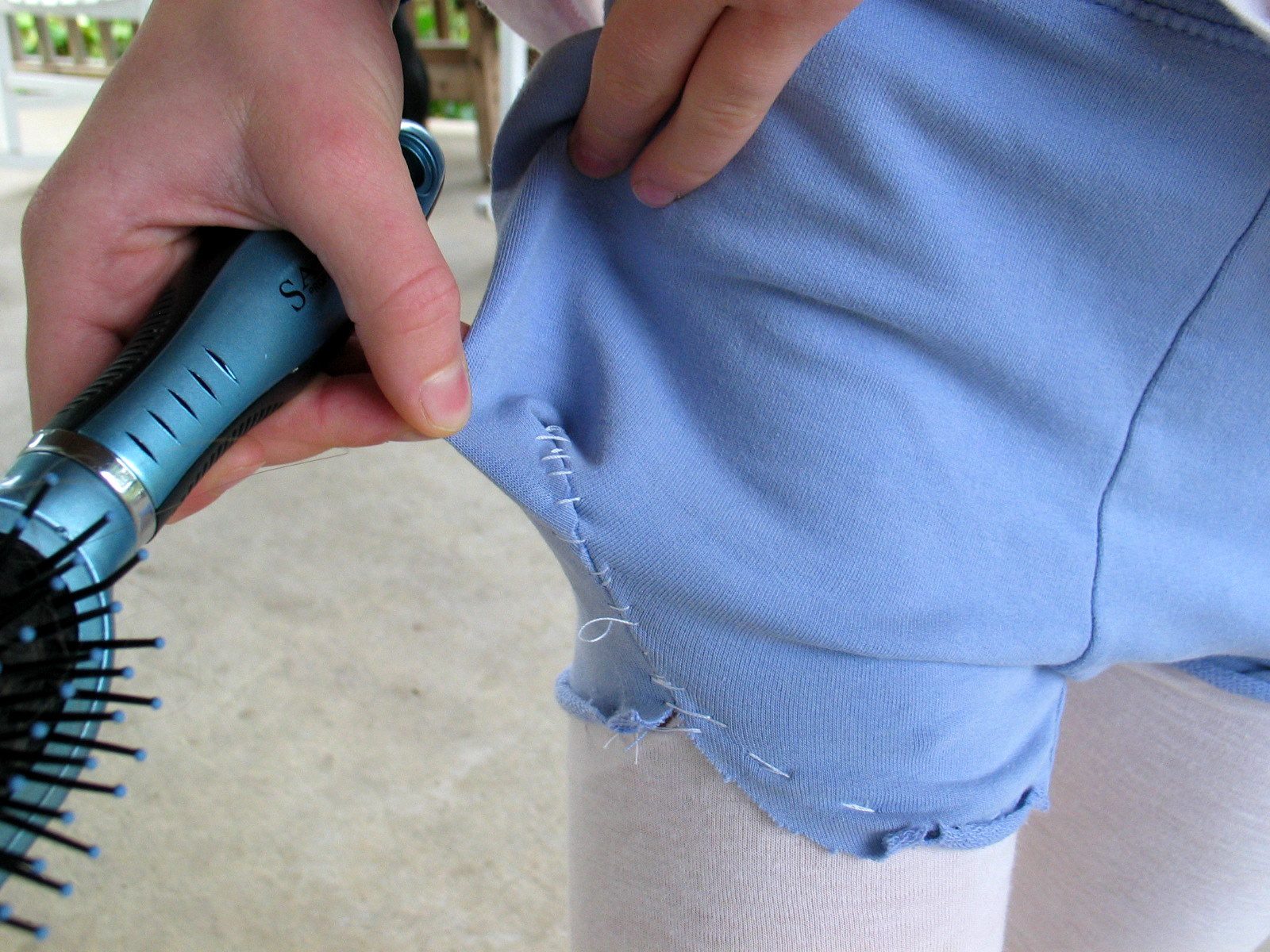 It makes my head spin to look at her. 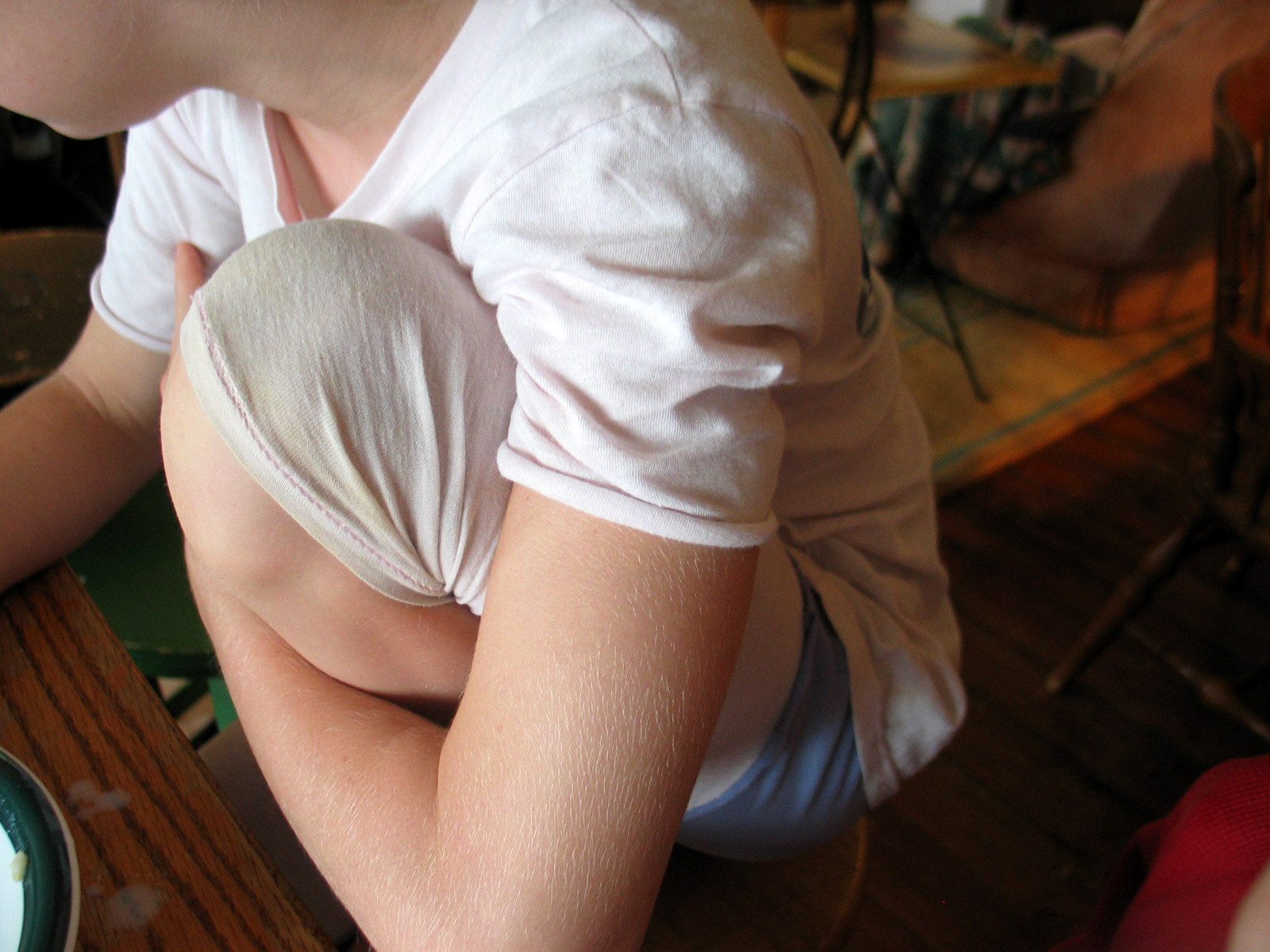 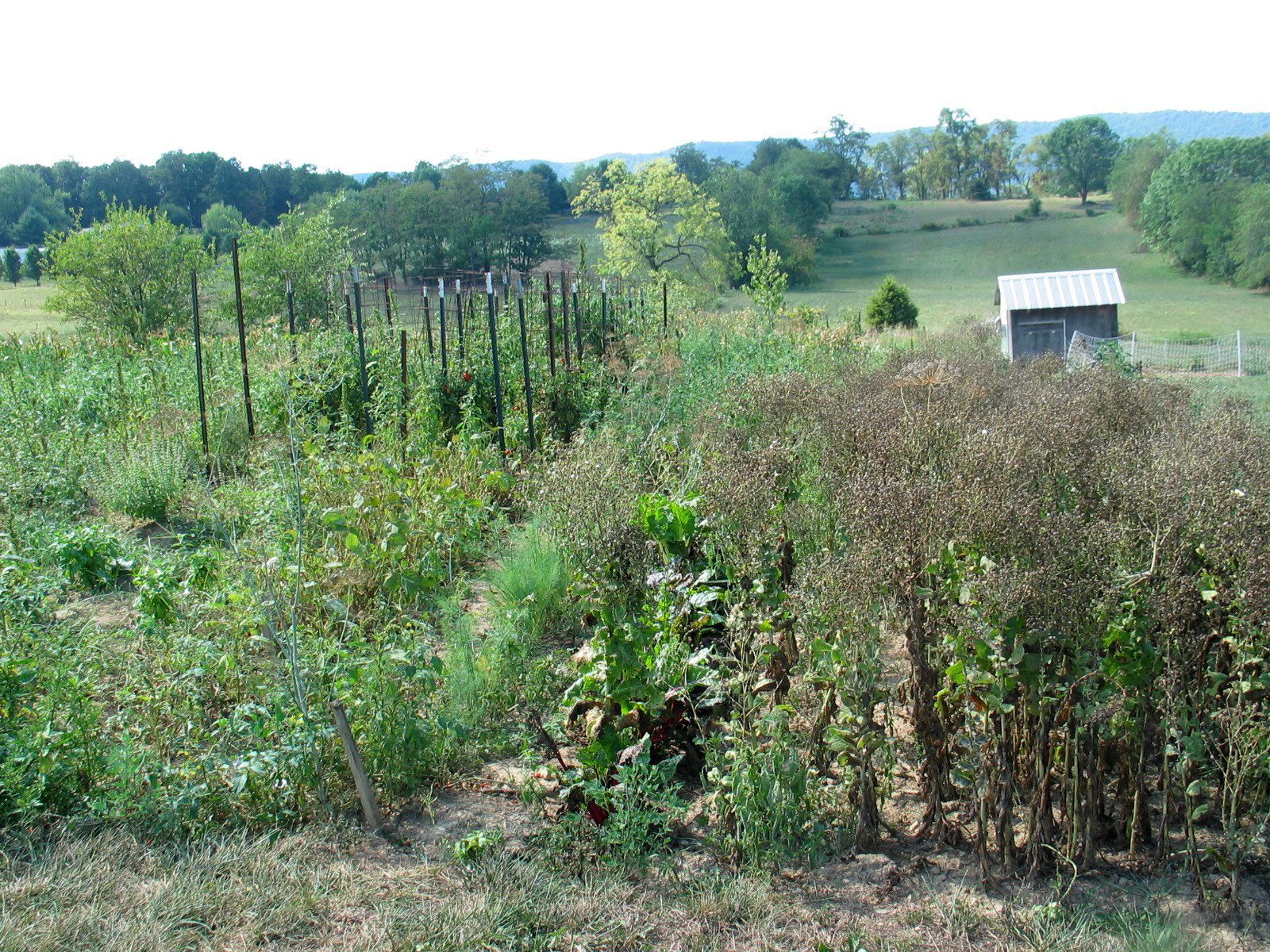 It’s been this way for months. 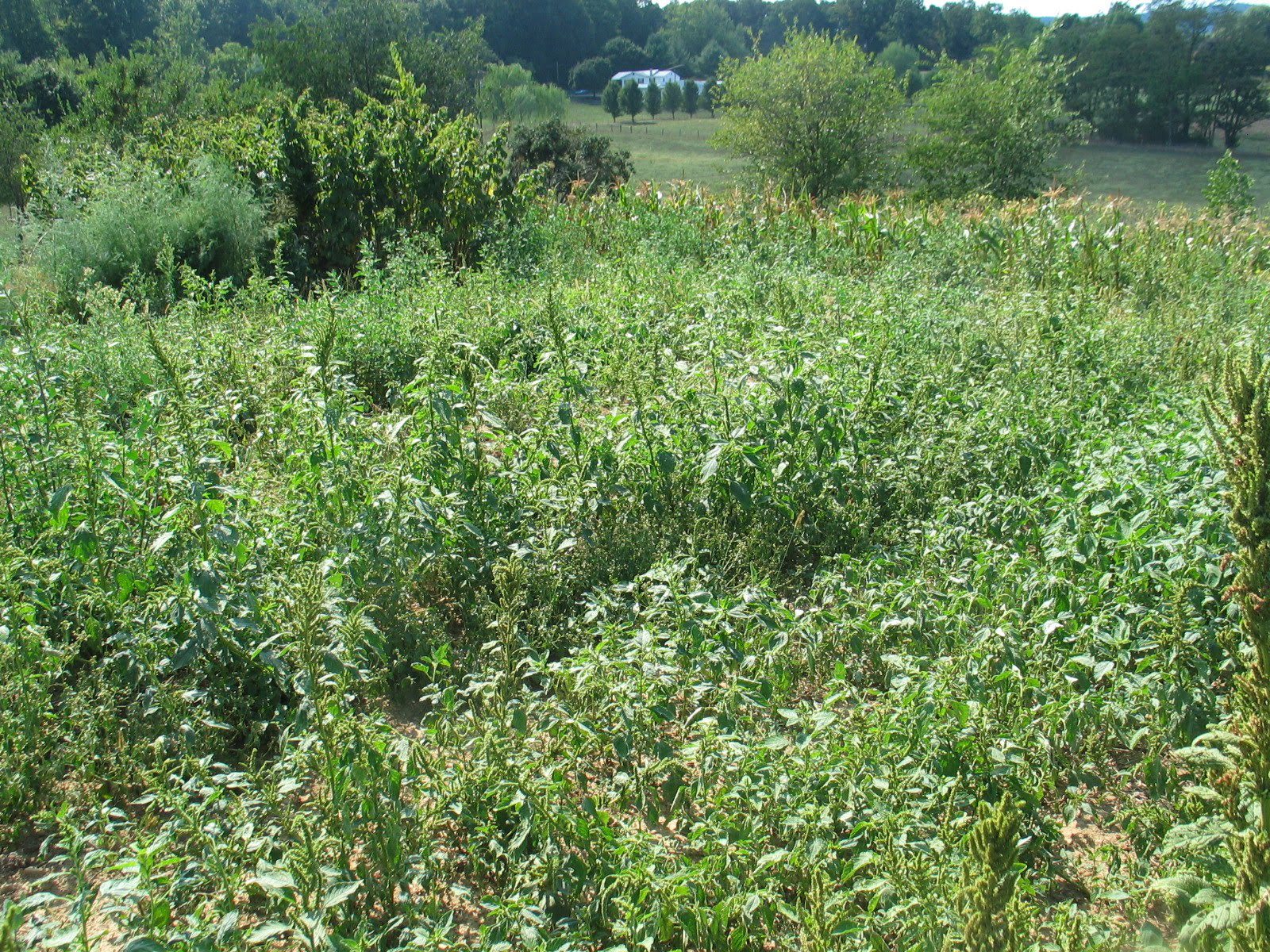 I blame the drought one hundred percent. 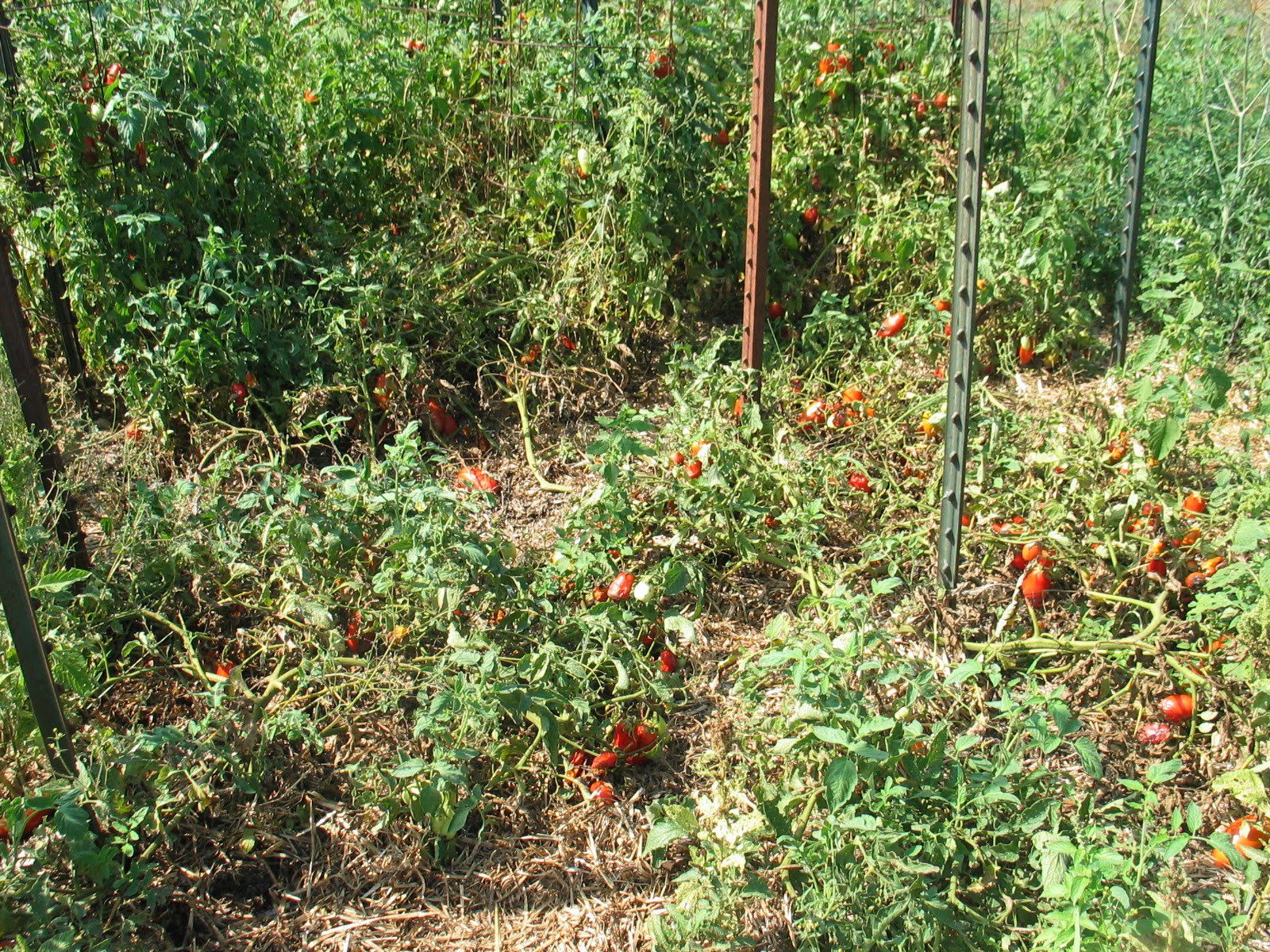 Usually I can not understand how people find time to go anywhere over the summer months, but this year I understand. If you aren’t putting up obscene amounts of produce, then the summer is for flying free. Who knew?

I didn’t fly, but I could’ve. Instead, I twiddled my thumbs almost completely off.

I did get a couple buckets of potatoes, and some baskets of tomatoes came in towards the end of the season. We’ll have the dry beans to harvest and store. A small pittance it is, but I’ll take anything I can get. 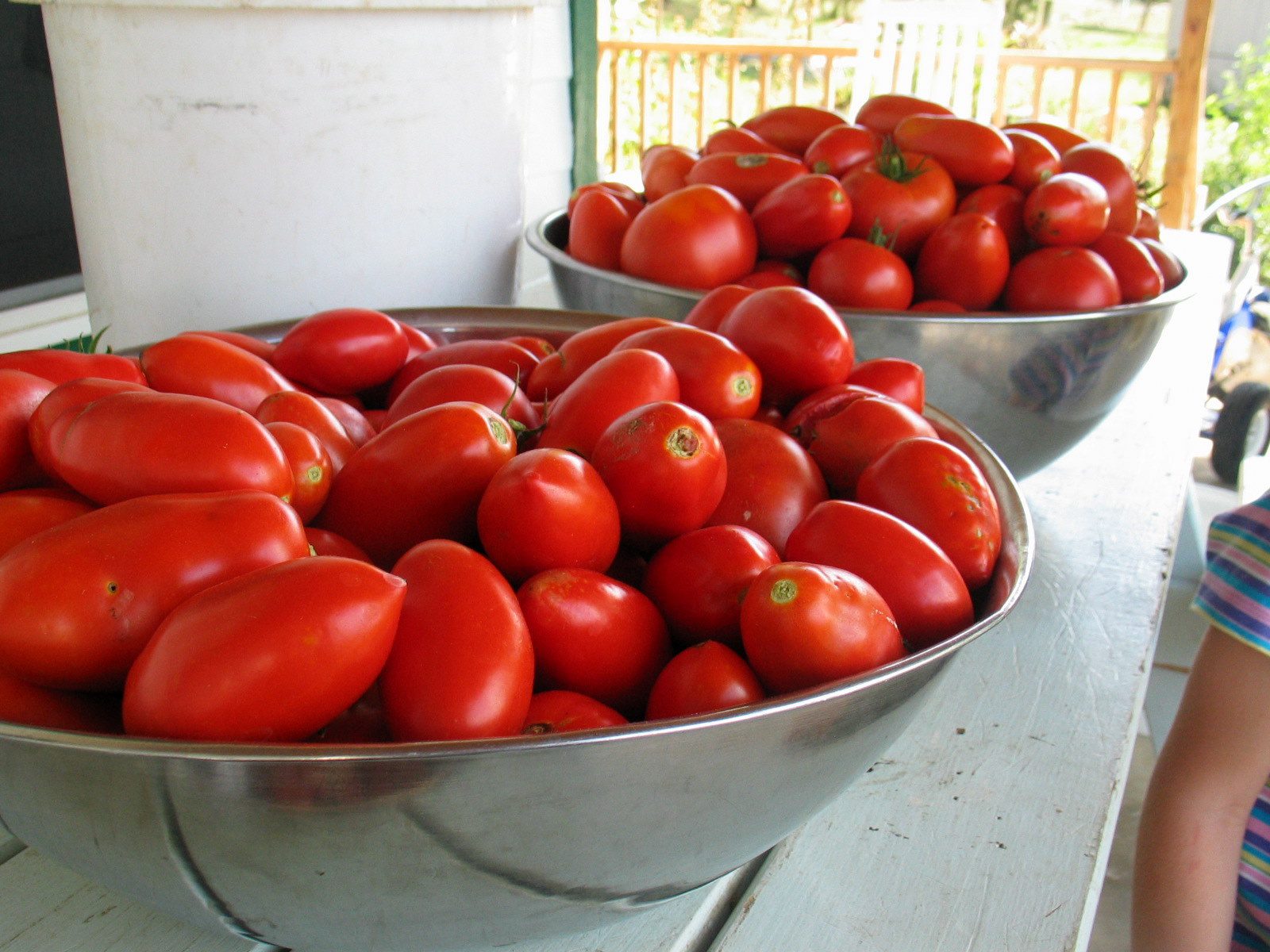 I’m hoping that this year’s dud-of-a-garden provides impetus for a kick-butt garden next year. We shall see….

Point Four: Muffins
I am hooked on these muffins. They are whole grain, tasty, and infinitely adaptable.

Here they are, dressed up with blueberries, chunks of nectarine, and white chocolate chips. 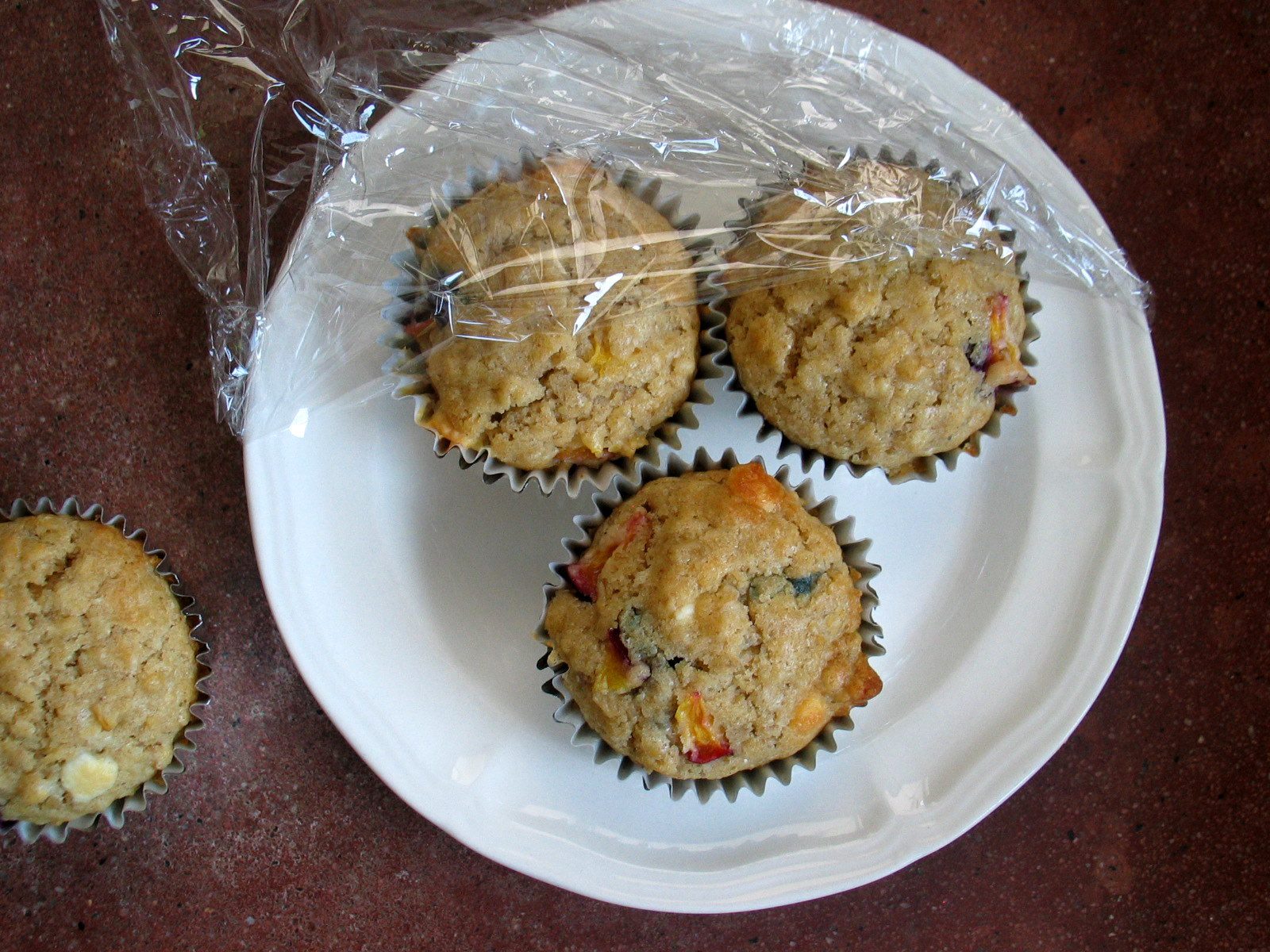 And here they appear as ginger-peach muffins. 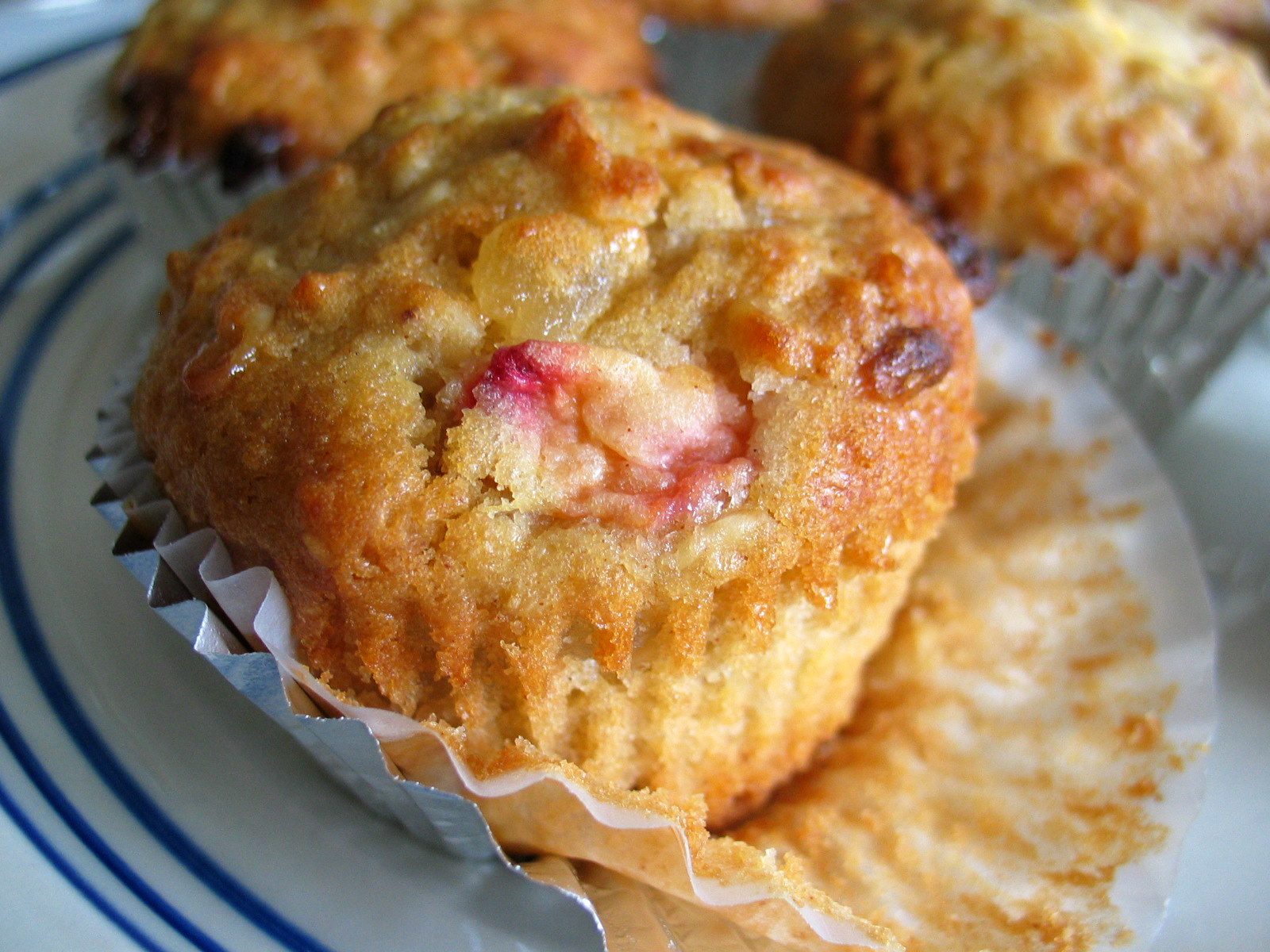 I didn’t take pictures of the red raspberry dark chocolate, but I really really liked them.

The oatmeal needs to soak in the sour milk for at least one hour, but more often than not I let the mixture soak over night. To give me even more of a head start, I also mix together the dry ingredients and line the muffin tins the night before. With those several steps done, the muffins come together right quick in the morning. 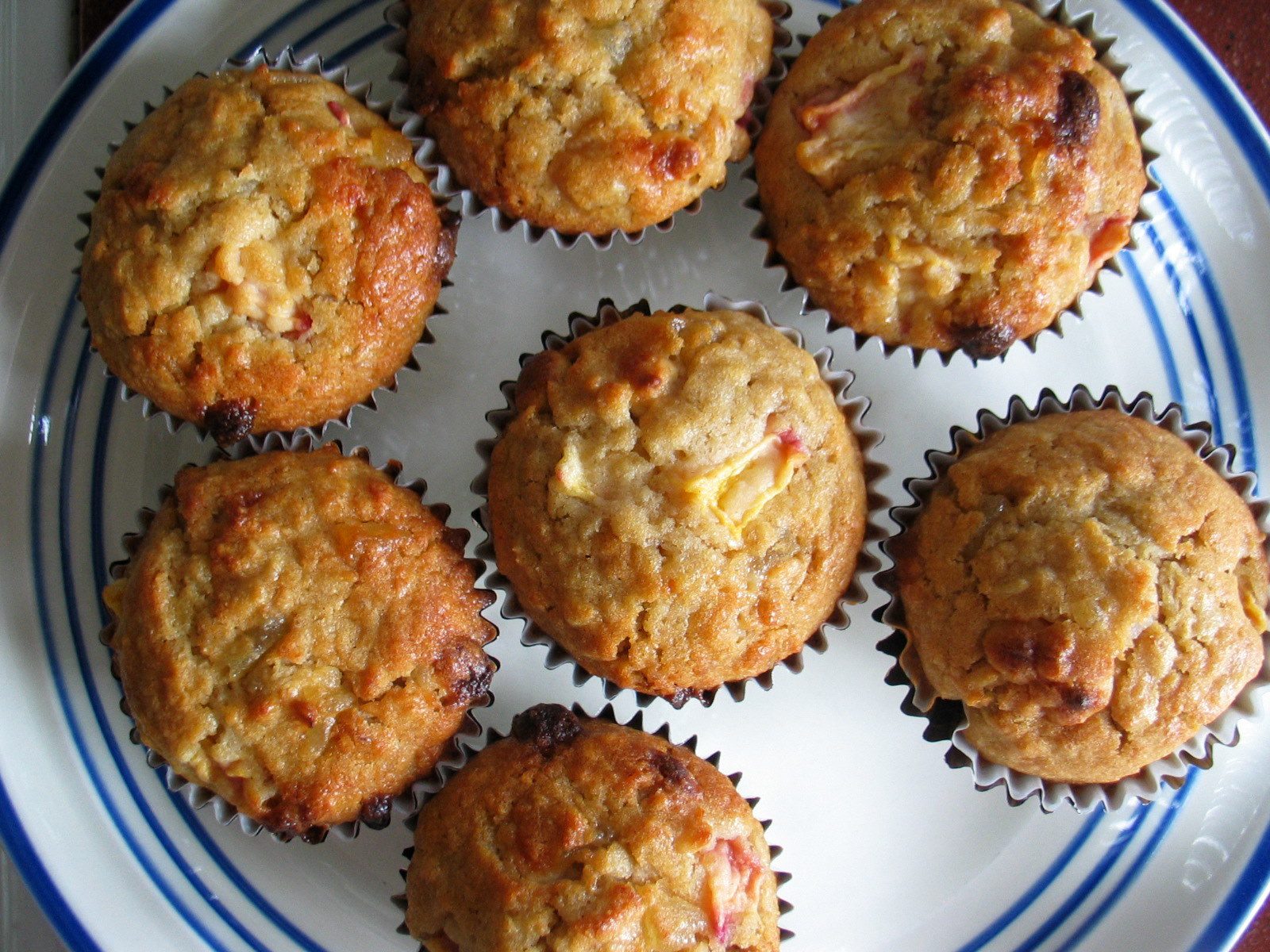 Visit Aimee’s post to get more ideas for yummy variations.

Keep in mind that the added dark or white chocolate greatly increase the yum factor.

Combine together the oats, milk, and vinegar. Cover and allow to rest at room temperature for at least on hour or over night.

Combine the soaked oats with the egg, brown sugar, and melted butter. Add the dry ingredients. Gently fold in the add-ins.

Divide the batter between twelve lined muffin tins (they will be quite full). Bake at 375 degrees for 13-18 minutes.

*Red Raspberry Dark Chocolate: add one cup of red raspberries (I freeze mine first so they stir in without mushing) and ½ cup of dark chocolate chips/chunks

*Ginger-Peach: replace the nutmeg with ½ teaspoon ground ginger; add 1/4 cup minced candied ginger, 1 cup diced peaches, and ½ cup white chocolate chips (this one was a hit at the most recent bellydance gathering)

This same time, years previous: Earthy ponderations, part three and starting a new baby (this one is still going strong, though it’s napping at present)