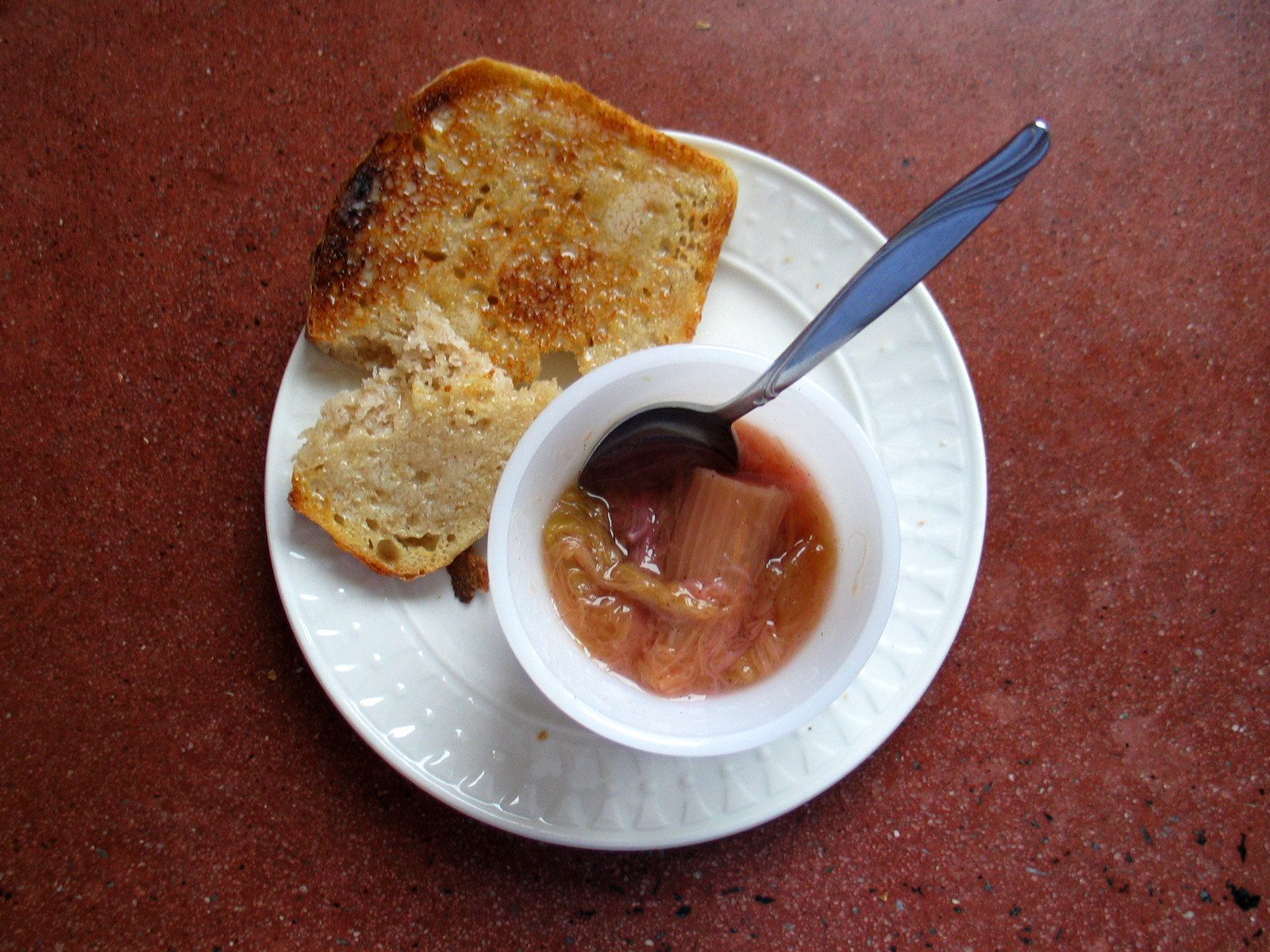 My computer is giving me fits. It’s been giving me fits for several weeks now, but yesterday it threw a gigantic hissy fit and now it no longer allows me to upload pictures or save any word documents.

All I have left (besides my family, house, and photo albums) is the internet, for which I am truly grateful. I can email and post, research and read to my heart’s content, but I can’t post any new photos that I take. That means no new recipes.

But no matter. I have lots of old recipes that I’ve photographed and have been meaning to tell you about. We’ll work on those for now, okay? The new computer that we ordered last night should be here in a couple weeks. In the meantime, I’ve got some roasted rhubarb for you.

I’ve made roasted/stewed rhubarb before, but I didn’t really like it all that much. I’m not a cooked fruit sort of gal. Fruit cooked in a pastry, yes. Fresh, yes. But just the hot saucy fruit? Not so much.

This recipe changed that, at least in relation to rhubarb. I made it twice, in quick succession, and then I ate so much of it that I got sores in my mouth. At which point I went cold turkey. My mouth has now healed and I’m ready to dig in with my spoon again. But this time I’ll be a little more moderate. 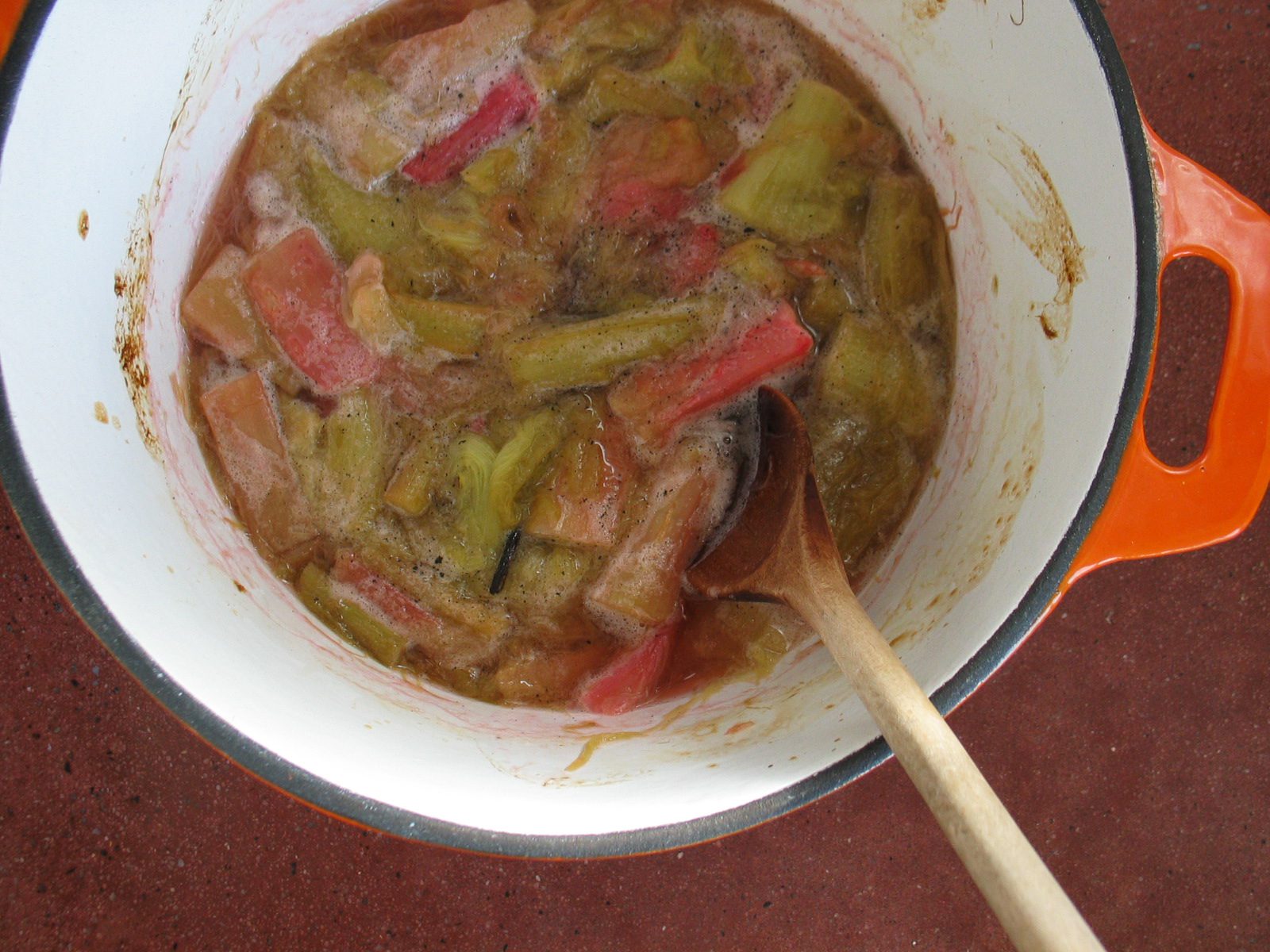 The recipe couldn’t be easier: a couple pounds of rhubarb, a half-cup of white wine and the same of sugar, and a vanilla bean, split in half. I found it to be an excessive quantity of vanilla (not because it didn’t taste good, but because vanilla beans are so darn expensive), so I recommend using half a bean. Even that will provide you with plenty of vanilla flavoring and lots of dainty black specks throughout. (Whatever you do, do not throw out that vanilla bean when you’re done with it. Rinse it off, dry it well, and then grind it up in your food processor with some sugar to make vanilla-flecked sugar. Or simply stick it in a canister of sugar and let it do its magic, no loud motors involved.)

The second time I made this recipe, I served it with skillet cornbread and vanilla ice cream. The paring was delicious, if I do say so myself. And I do. Nubbly, buttery, slightly-sweet cornbread, tangy-tart rhubarb, and creamy-cool ice cream, oh my! 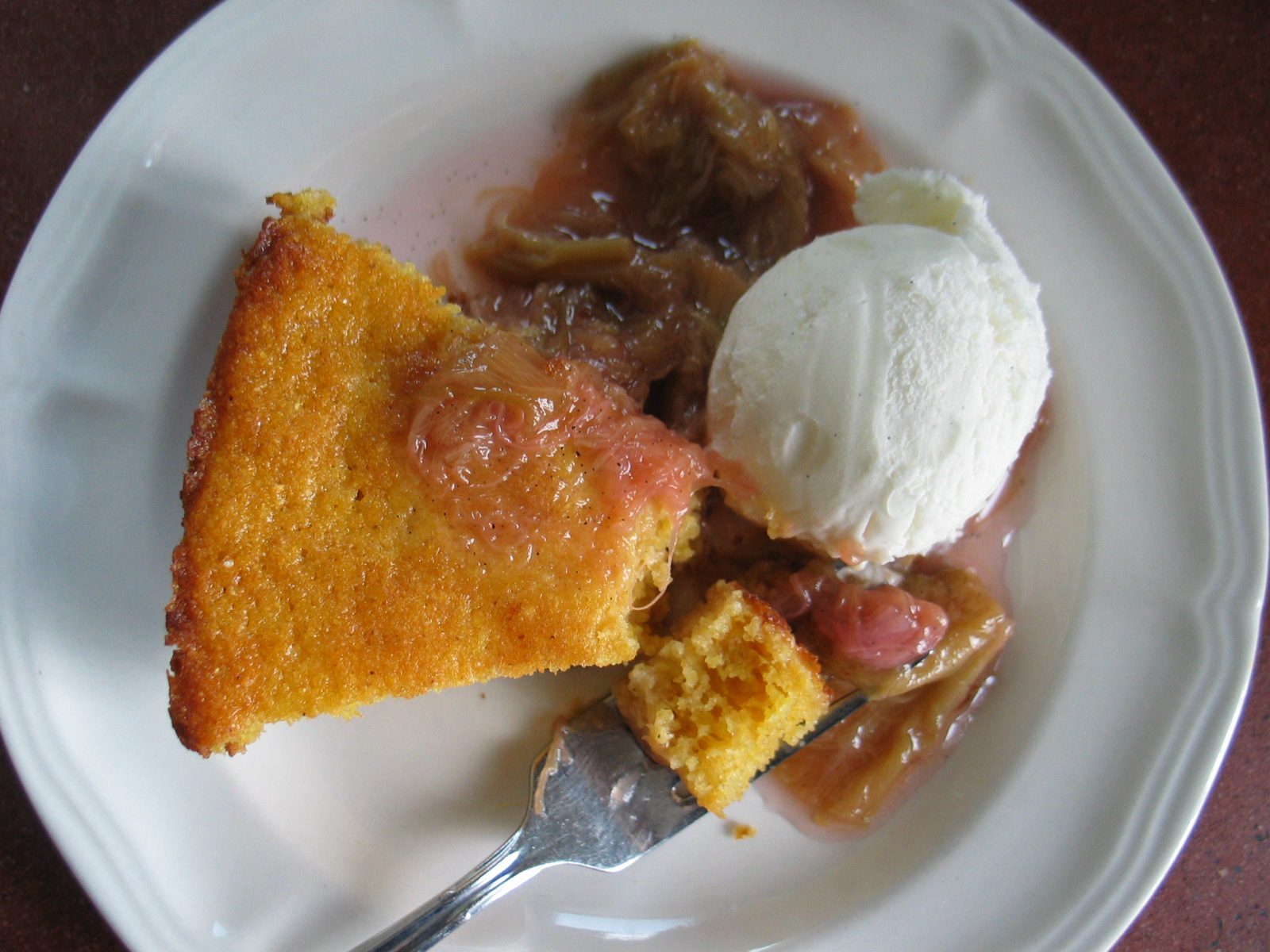 I used this cornbread recipe, but I baked it in an eight-inch cast iron skillet which improved the texture considerably. Simply preheat the skillet in the oven, add a tablespoon of butter and swish it around, making sure to coat the sides. Add the batter and return the skillet to the oven to bake for 20-30 minutes (or longer, if you forget to turn the oven back on after removing an earlier batch of baking). It’s a 100-percent whole grain recipe (my mother’s jaw about hit the floor when I told her there was no white flour in it), what with the cup of cornmeal and a cup of whole wheat pastry flour, both freshly ground.

Do I sound annoyingly holy? I’m not. I’m addicted to Swedish fish.

Molly says that red rhubarb is best for eye appeal, and I agree. However, the variety I have in the garden is mostly green with some red thrown in, and I deal just fine. Though I am hoping to get some starts of ruby rhubarb sometime soon. Anyone have some to share?

Put the rhubarb in a Dutch oven. Add the rest of the ingredients and stir gently. Bake, uncovered, at 350 degrees for about thirty minutes, or until the rhubarb is tender. You may need to stir it once or twice, but don’t overdo it. Otherwise it shreds and mushes and loses some of that all-important eye appeal.

Serve plain, with whipped cream or vanilla (or strawberry) ice cream, alongside cake (or not), hot or cold.

About one year ago: Pounding the pulpit