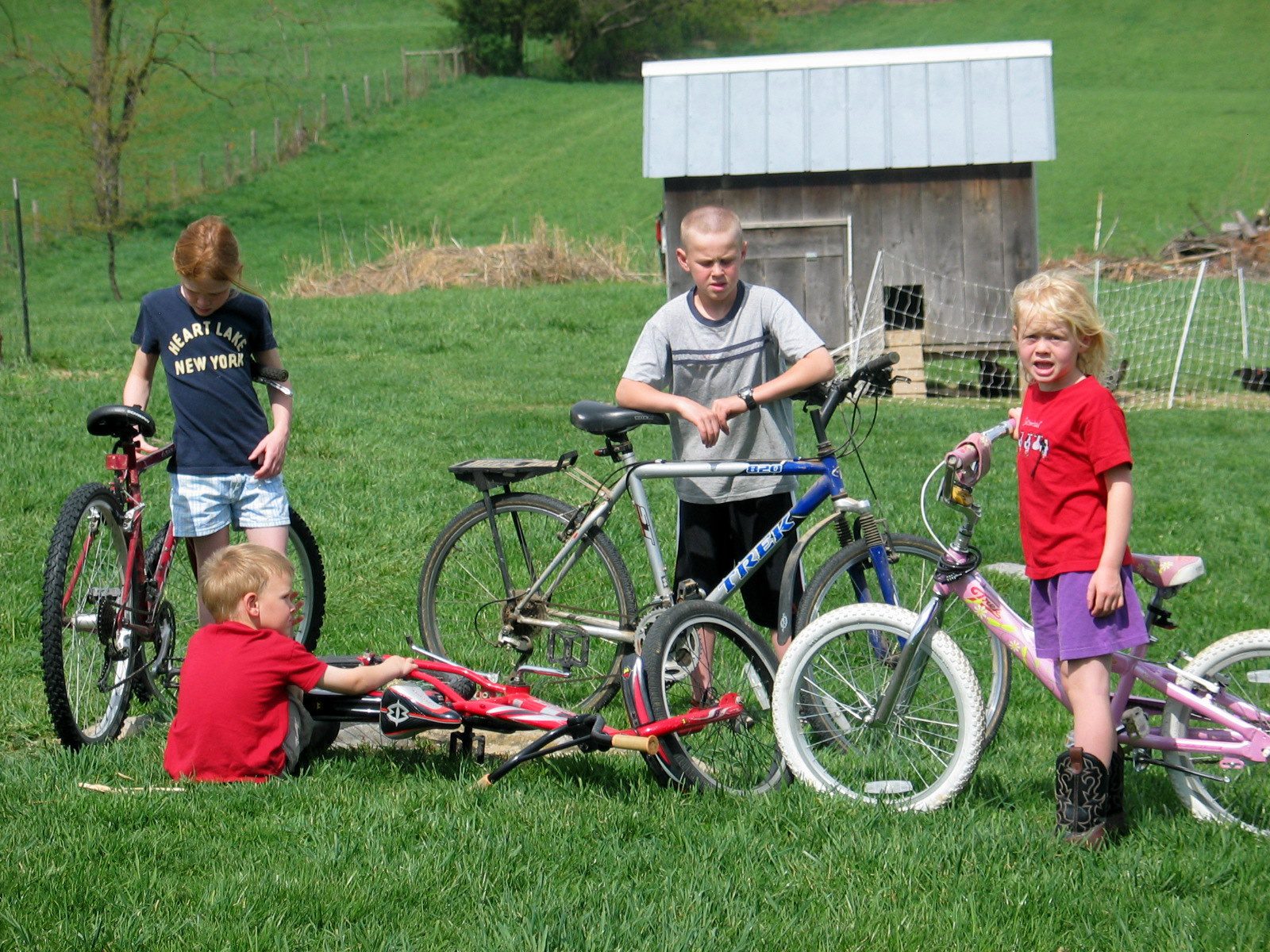 There are seven kids running around outside: big boys on rollerblades, carrying sharp sticks, little girls and boys (some with lice, some without; I’m keeping my fingers crossed) drawing on the porch (on paper, I hope). I’m inside, sufficiently pumped on sugar and caffeine. There is no need to procrastinate further. It’s time to write.

I was a little surprised that none of you commented on this one line in the lousy post: 26. Send the older two lice-free children on a three-mile bike ride to visit their daddy’s job site. I thought at least someone would spy it and shoot me an incredulous “WHAT???”

I got feedback from a fair number of you regarding my question as to whether or not it is appropriate to allow the older kids to go on adult-free bike rides. Some of you were quite wary, others only so-so. (Just yesterday I got a letter from my mother-in-law in which she chronicled her children’s biking mishaps. Someone rode a bike into sister Sarah’s leg. Little Mr. Handsome got an elbow-full of gravel while riding on a country road. Sarah (what’s up with her, huh?) got some clothing caught in the spokes and flipped head over heels. But the best one was a trike accident. “Tom was riding down the front lawn with a nail in his mouth. The trike fell over and the nail went [I think] into the roof of Tom’s mouth.”)

None of you said “Go for it.” So naturally, that’s what I did. Because I’m ornery like that.

While I am by no means a hardcore biker, I’m no stranger to bikes. When I was a babe, I rode in a little plastic seat behind my mom’s billowing blouses, and by the time I was nine-years-old, or thereabouts, I was riding the three miles down country roads to my friend’s house. My town friends and I would peddle all over our little neighborhood and to the secluded (pervert alert!) public school where we’d play in the dark, spooky woods for hours on end. And then my family moved to West Virginia where bear prints were found in the swamp by the end of our driveway and my mother had to walk me out to the bus stop every morning because I was petrified. Different things are scary to different people.

I tend to find myself on the more carefree side of the parenting fence. I hesitate to say no to risky (reasonably so) endeavors for fear that my children will end up feeling scared or unsure of themselves. I’d much rather teach them how to be safe, drill them, act out scenarios, put safeguards in place, and then empower them to (in this case) peddle free.

I don’t know what a sand dab is, though I have a feeling it resembles Flat Stanley (now there’s another thing to worry about—bulletin boards), so I don’t say that exactly, but I did read to them the newspaper obituary about the community kid who wrecked his four-wheeler and died. And I told them, my adrenaline still pumping hours after the event, about sitting in my van at an intersection in town and watching our good (adult) friend nearly get hit by a car while making a left-hand turn on his bike.

For the most part, Yo-Yo and Miss Beccaboo have been pretty well endowed with common sense. (Except for the time when they found a wallet at a park and then attempted to stop cars to see if it belonged to the drivers. We have since thoroughly discussed the inappropriateness of stopping strangers in cars.) When I drilled them on bike etiquette right before they took off on their three-mile ride, they listened very closely, eyes wide. Nerves sharpen the senses. (Did you know that the best stuntmen are the ones who are deeply terrified? We learned that from the video The World’s Most Spectacular Stuntman.) We discussed dogs, staying together, not talking while riding, and keeping their heads up. That’s my Amy Tan’s mother-like mantra, “KEEP YOUR HEADS UP OR THEY WILL GET SQUASHED LIKE PUMPKINS.” I don’t usually say the pumpkin part, but they know.

I’m still not to the point of letting my kids joy-peddle around the neighborhood, but I’m thinking our next step might be to teach them a three or four mile loop, clock it, take them on a couple practice runs, and then let them ride that when they get the itch to burn off some energy.

Till then, they just run around the yard with sticks.

About one year ago: Going to work.