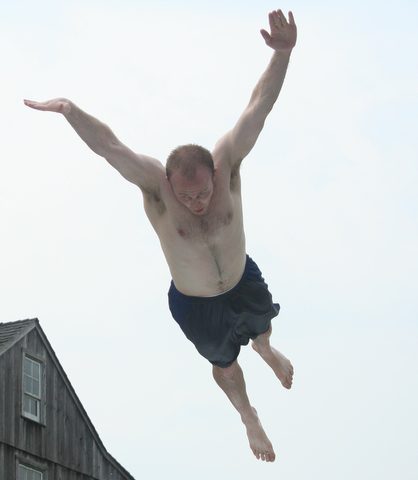 It’s common knowledge that my tiny-little brother is weird.

Let’s chronicle the evidence, shall we?

*He likes math, and not only that, but he reads entire books filled with nothing more than mathematical equations.
*He used to bolt up and down the wooded hill behind our WV house to get in shape for soccer.
*He likes to dig holes for fun.
*He wipes out a la Napoleon Dynamite and then writes about it for the university paper.

Let me stop right there and quote from that story.

It was a pretty, almost-fall day and I had just finished chorus class. Happily I pranced down the sidewalks leading from Martin Chapel to Elmwood where my bags were packed and ready—I was about to go home for the first time since coming to school. As I passed the Commons, I broke into a sprint like an Olympian on the hundred meter dash. You know how they lean way front at the beginning, when they’re trying to speed up really fast? Well, I guess I must have leaned front just a little too far. I desperately strode ahead, tying to regain balance, moving my legs as fast as I could to bring my rear end back underneath my front end, but it was too late. My heavily laden backpack slid forward over my shoulders and I had no choice but to dive onto the mercilessly abrasive concrete.

As I slid to a halt, my first thought was, “Am I okay?” I had to be okay. I didn’t want to have to explain to people that my injuries were a result of my clumsiness. It would not have felt so bad if I had been run over by a crazy driver or something like that; then I would have been only a victim of someone else’s stupidity. But I had no excuse, not a single one. I don’t even remember tripping on anything. Still hoping that I wasn’t really hurt, I jumped to my feet and assumed the prettiest smile I could muster for my friend Derrick, who was running to the rescue. By this time, I was no longer deceiving myself about my pitiful state, but I still tried to make up for my clumsiness with wit. “I don’t think I have dain bramage,” I said.

See what I mean? He’s a goon. Pressing onward… 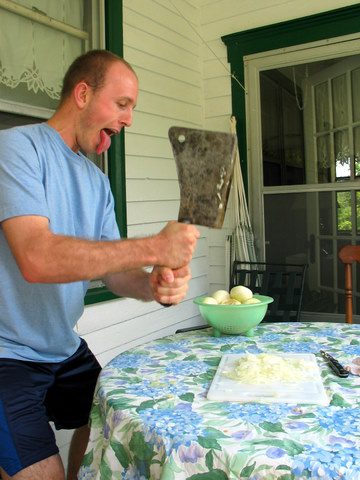 *He chops veggies with a cleaver.
*He rides his bike in snowstorms. 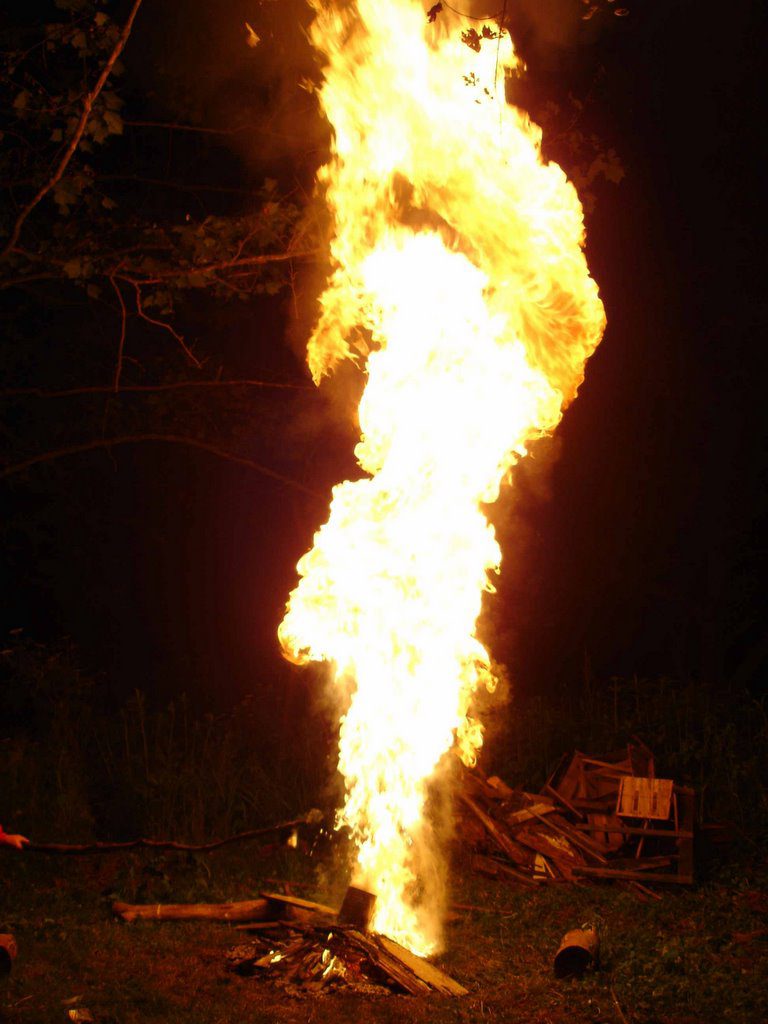 *He makes enormous fire mushroom clouds with wax and water. 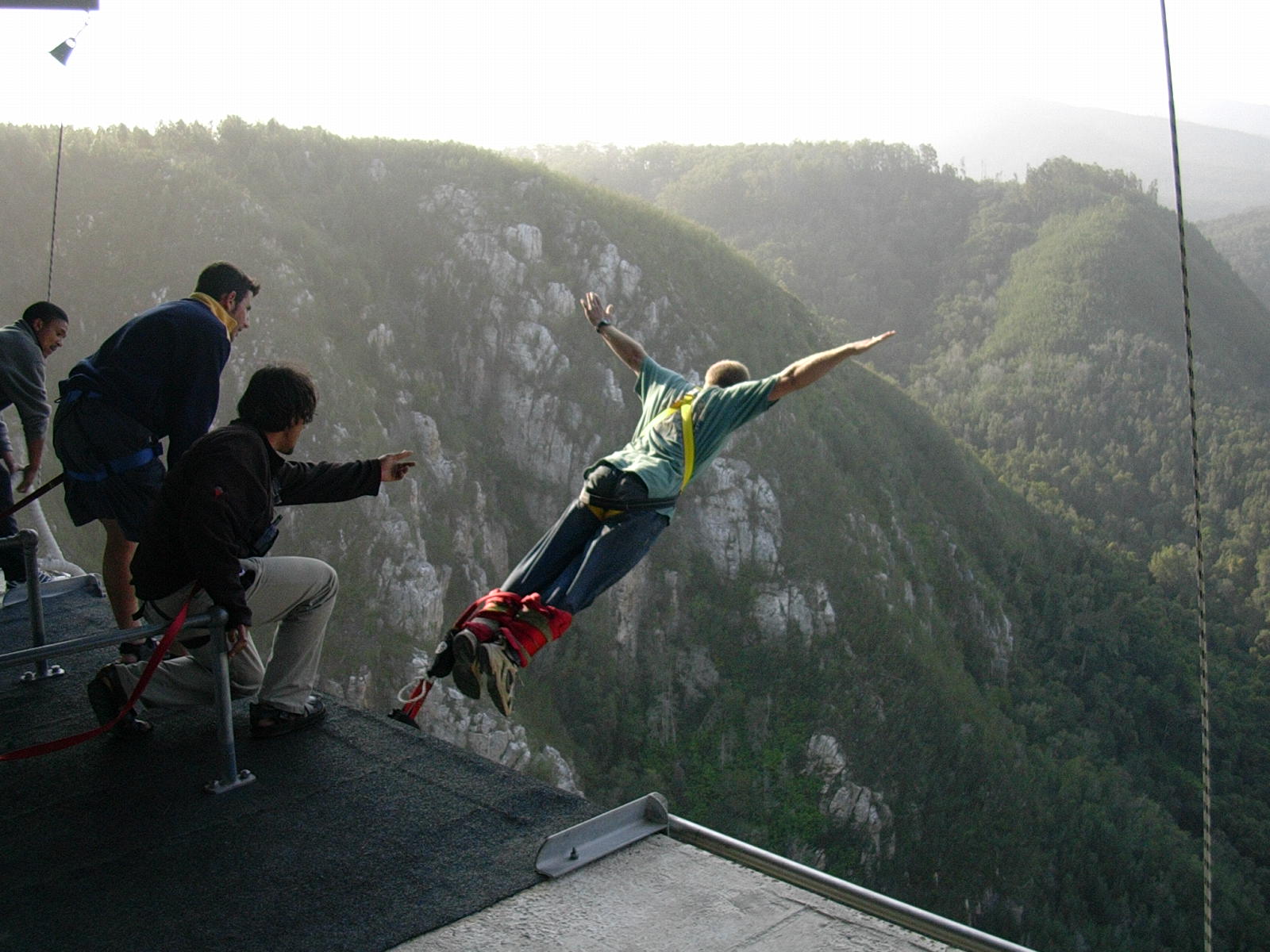 *He bungee-jumped from the Bloukrans Bridge in South Africa. (When I look at this picture, I have to remind myself to breathe.)
*He recently used a pair of needle nosed pliers to remove a wart on his hand. (Dumbbell.)

In case that isn’t enough to convince you, let’s move along to the food weirdnesses. Consider the following:

*He lives off of pumpkin pie, cereal, pancakes, pasta, and enormous hunks of beef.
*He refuses to measure when he cooks. It takes too much time, he says, or some such stuff-and-nonsense. (Regardless, he makes a kick-butt pumpkin pie in his gigantic cast iron skillet.)
*When he’s doing lots of physical labor (like digging holes) in hot weather, he ensures that he gets enough salt by sprinkling some in his peanut butter and jelly sandwiches. On nice, thoughtfully prepared homemade bread and strawberry jam! What is the point? I ask you. Why bother making good food if it’s going to be so royally blasphemed?
*He packs his whole lunch in one big plastic container, everything all mounded together. For example: a sandwich topped by a carrot, a wedge of skillet-baked pumpkin pie, a cucumber, and a cold baked potato. And perhaps a couple shakes of salt.
*He adds orange juice to his milk.
*When he was little and he didn’t know any better, he killed and ate a mockingbird.
*In college, he dumpster dived like it was an Olympic sport.
*He once fried up a pan of locust and served them with a choice of honey, ketchup or Ranch dressing. He got Miss Beccaboo to eat one.
*He also caught a live locust and ate it raw, just to see what it tasted like. Or maybe because he was practicing to be a prophet.
*He chews up chicken bones.

Keeping all that in mind, the other week I got an email from him: “I had some exceptional chickpeas at a gathering Saturday. The link to the recipe is below, because I had asked to pass it on to you.“

My brother never sends me recipes. Perhaps because he doesn’t use recipes, or perhaps because it takes away from valuable time otherwise spent bicycling, fiddling, or computating. In any case, I took heed. 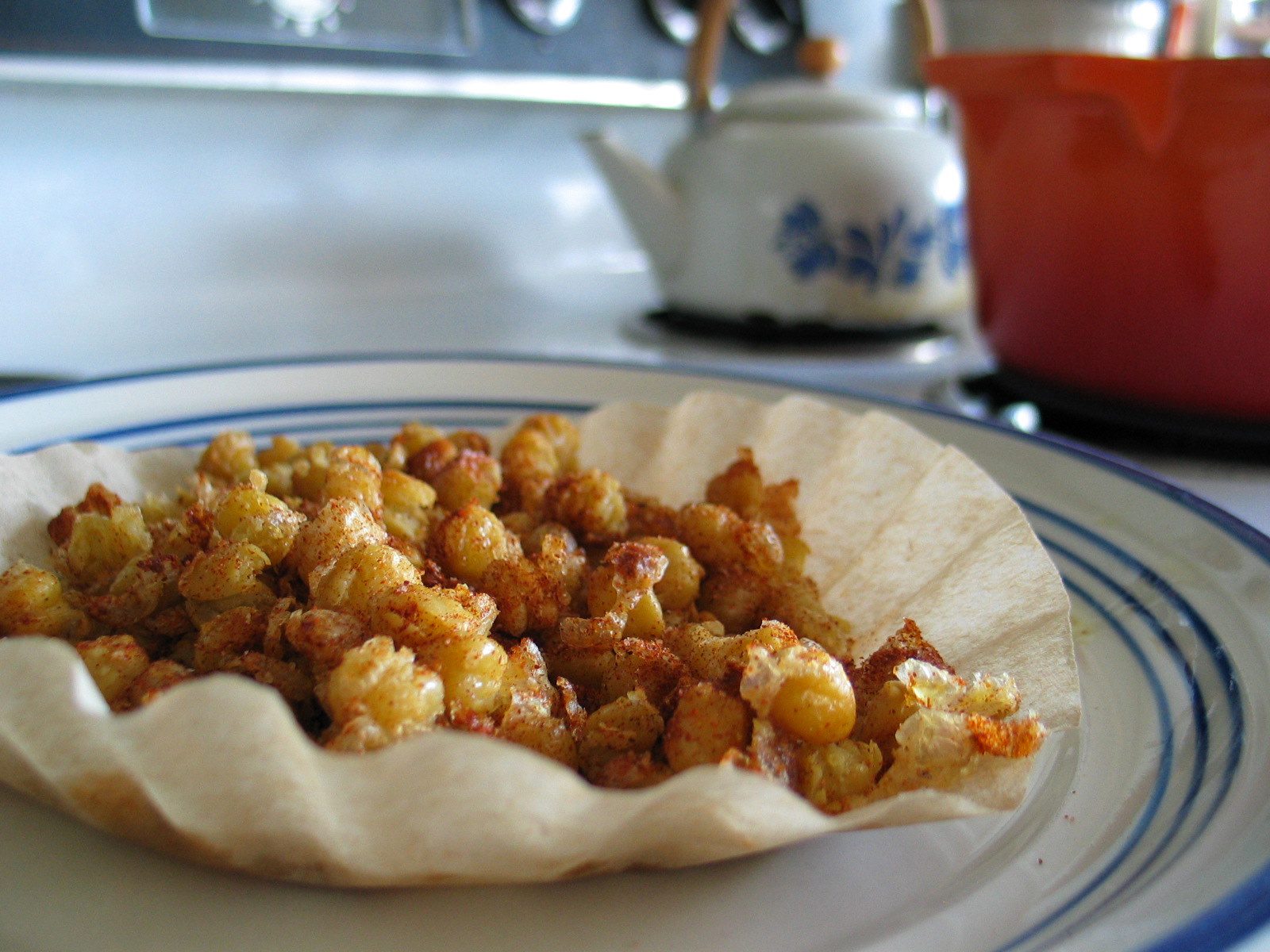 The recipe was for an appetizer, smoky fried chickpeas. It called for lemon zest, thyme, garlic, and smoked paprika. I had a one-pound bag of dried garbanzos lounging on my still-overfull pantry shelves, so I ripped into the plastic and set the legumes to soaking.

Even though this recipe came to me via my brother, these chickpeas are not weird. Or maybe if they are weird (the rest of my family thinks so), at least they’re also delicious. 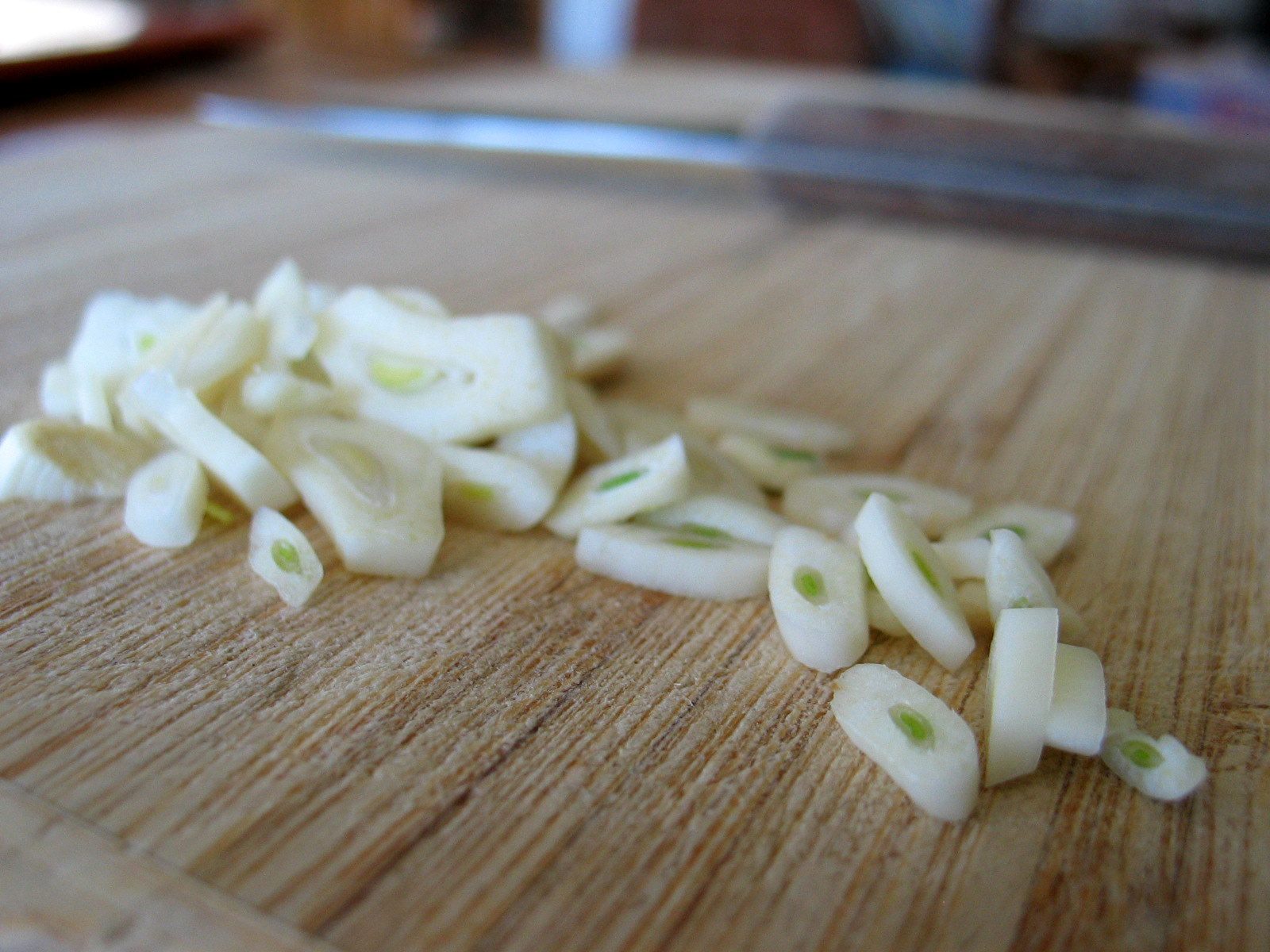 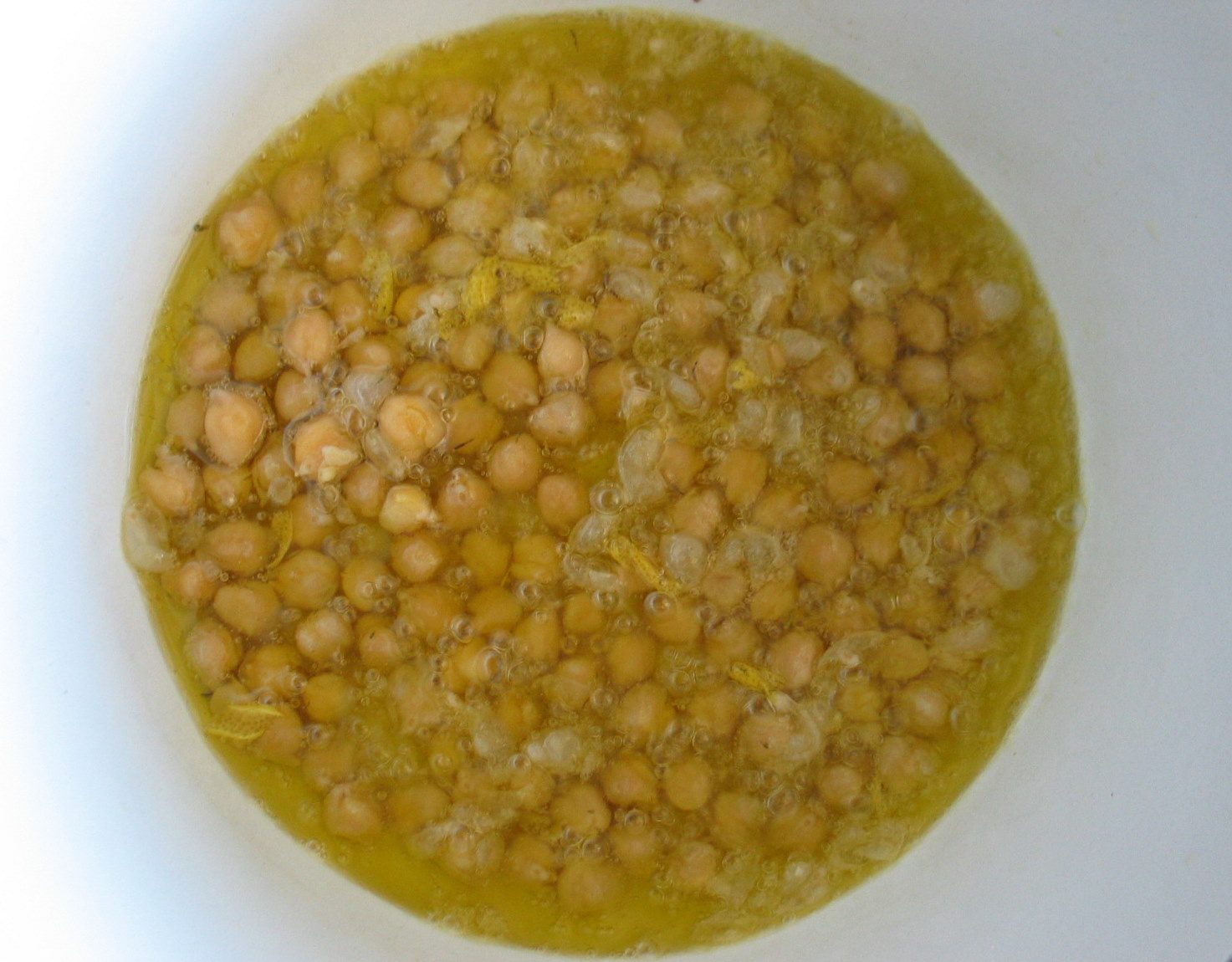 In any case, they’re crispy, nutty, crunchy, sometimes tender-creamy, smokey, garlicky. I had to set the plate up on top the fridge to put an end (kind of) to my first-rate binge snacking. 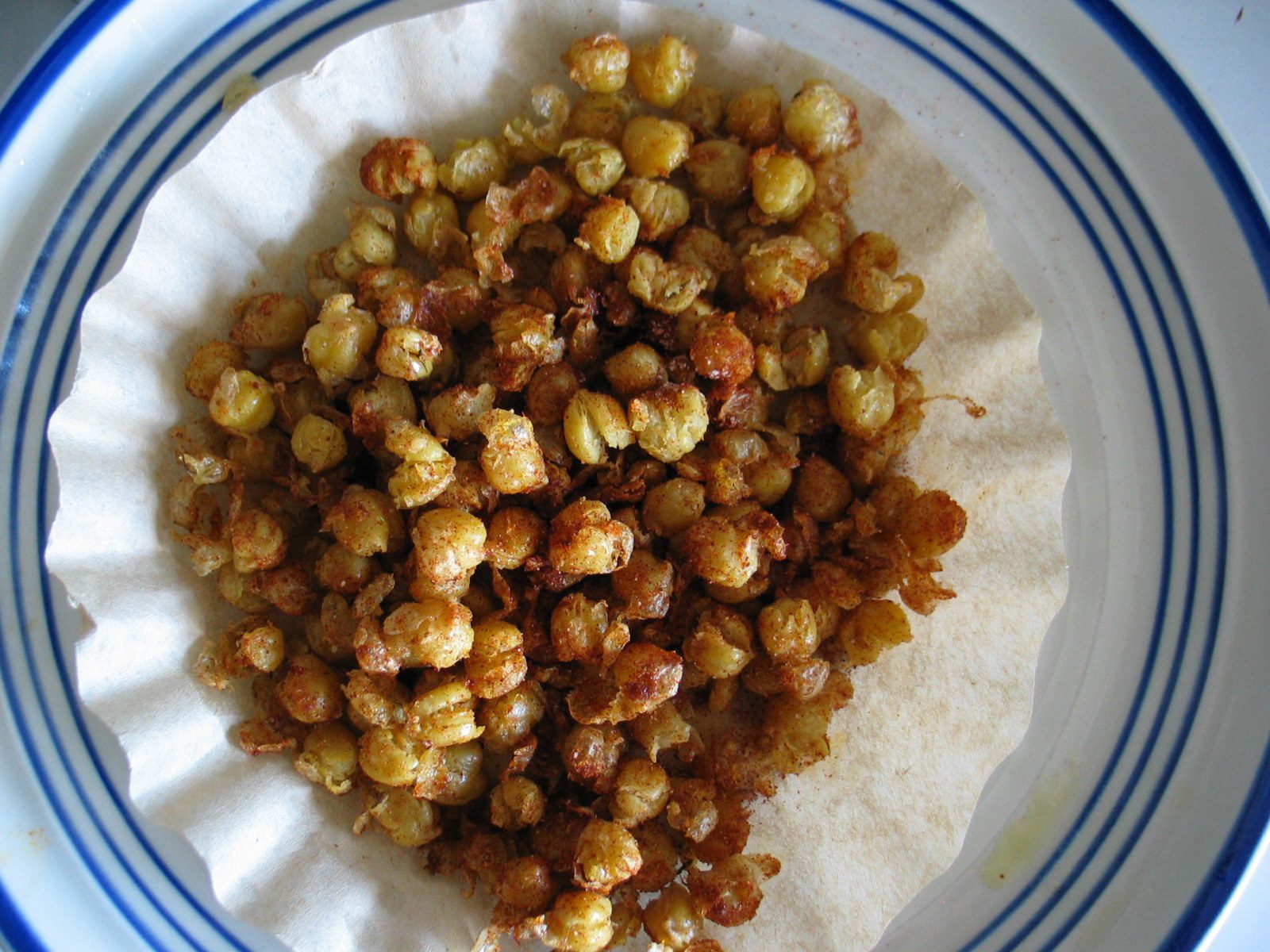 The original recipe calls for frying the sliced garlic after frying the chickpeas, but I think it would make more sense to first fry the garlic and then proceed with the rest of the frying—that way the garlic-scented olive oil would have a chance to flavor the peas as they take their hot oil bath.

As you can see from the proportions, there is a good bit of flexibility. I used two cups of cooked chickpeas, but the recipe called for two cans which equals 3 cups, I think. I dialed back the seasonings accordingly, but I don’t think it was necessary to reduce the lemon. You can never have too much lemon, right?

If you have fresh thyme on hand, eliminate the dried and add a sprig of fresh to the hot oil at the same time as the lemon.

One note about smoked paprika. If you don’t have any, for heaven’s sake go out and buy some! This spice is new to me, but it’s fast becoming one of my favorites. I use it in everything from cream of tomato soup to baked corn to sauteed Swiss chard.

Spread the drained chickpeas on a towel and gently pat them till fairly dry.

Heat the oil in a heavy bottomed, high-sided pot. When it’s hot (I didn’t measure, but if you’re inclined to use thermometers, aim for about 355 degrees), add the garlic and fry till golden brown. Keep a close watch—it cooks quickly. Remove with a slotted spoon and drain on paper towels, a couple coffee filters, or a torn open brown paper bag.

Add half the chickpeas, along with half of the lemon and thyme, to the hot oil and fry for about five minutes, stirring frequently. When they are crispy brown, transfer them to a paper-towel lined plate to drain. Sprinkle with half the salt and paprika.

Repeat with the remaining chickpeas. Add the toasted garlic slices and toss to blend. Taste to correct seasonings. (Hot pepper might be a nice addition.)

Store any leftovers in an airtight container. Because they soften over time, they are best eaten the same day (though I still thought them plenty delicious the second day).

Serving recommendations: make these for an afternoon snack or for an appetizer for a schmultzy party. (I imagine they’d pair nicely with fried locusts.)

About one year ago: Brandied-Bacony Roast Chicken.