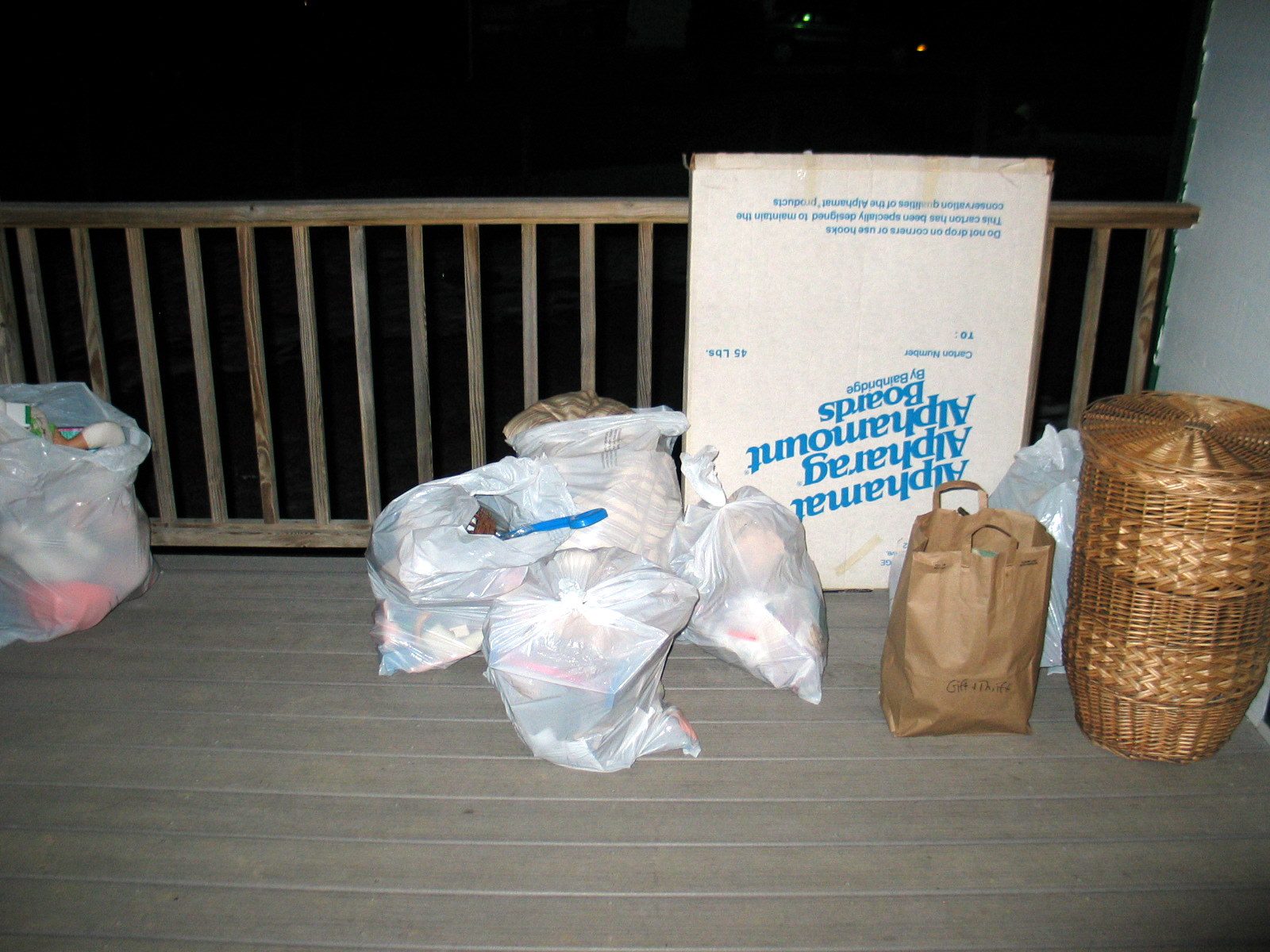 Last night I went on a rampage. It had nothing to do with my earlier breakdown. I had been scheming about The Rampage for several days. The There-Is-So-Much-Junk-In-This-House idea had started brewing a couple weeks ago and it had reached a rolling boil. It was high time I attended.

So I did. Mr. Handsome took the girls along with him to Yo-Yo’s evening wrestling class, and on his way out he dropped The Baby Nickel off at my brother’s house. It was just me at home for two-plus, bliss-filled hours. I resisted the urge to sit down and write and instead started pulling brand new garbage bags out of the box and writing on them with permanent marker. I labeled one bag “Gift and Thrift,” another “Trash,” and a third one “To Hold For Later (Maybe).” And then I commenced to dunging out.

I was brutal and savage and brash. I attacked already-dismembered Barbies (I never said I play fair), extra votive holders, falling-apart baskets, generic vases, decades-old (not really) play-dough and all the worthless plastic crap that comes with the commercial variety, an old broken dollhouse, an old broken fire truck, an annoying pusher-popper thingy that I never let the kids play with anyway because it gives me a headache, a blanket, a falling-apart bedspread, books we never look at, a pizza pan that’s been sitting untouched in the bottom of my oven drawer for a good five years, and so on.

I labeled more bags, and then more bags.

In the end I reigned victorious. I filled about eight garbage bags—four of garbage, three or four to go to the thrift store, one bag “to hold” (to see if the kids miss any of its contents—I doubt they will), and one big basket hamper (a thoughtful gift, but it didn’t fit in our bathrooms) to return to my mother.

That was just in two hours, folks! Think how much more I could take out in another three or four hours!

And the scary thing is: I only scratched the surface. There are large areas (dresser drawers, the linen closet, games, multiple book shelves, THE ATTIC, etc) I didn’t even touch. 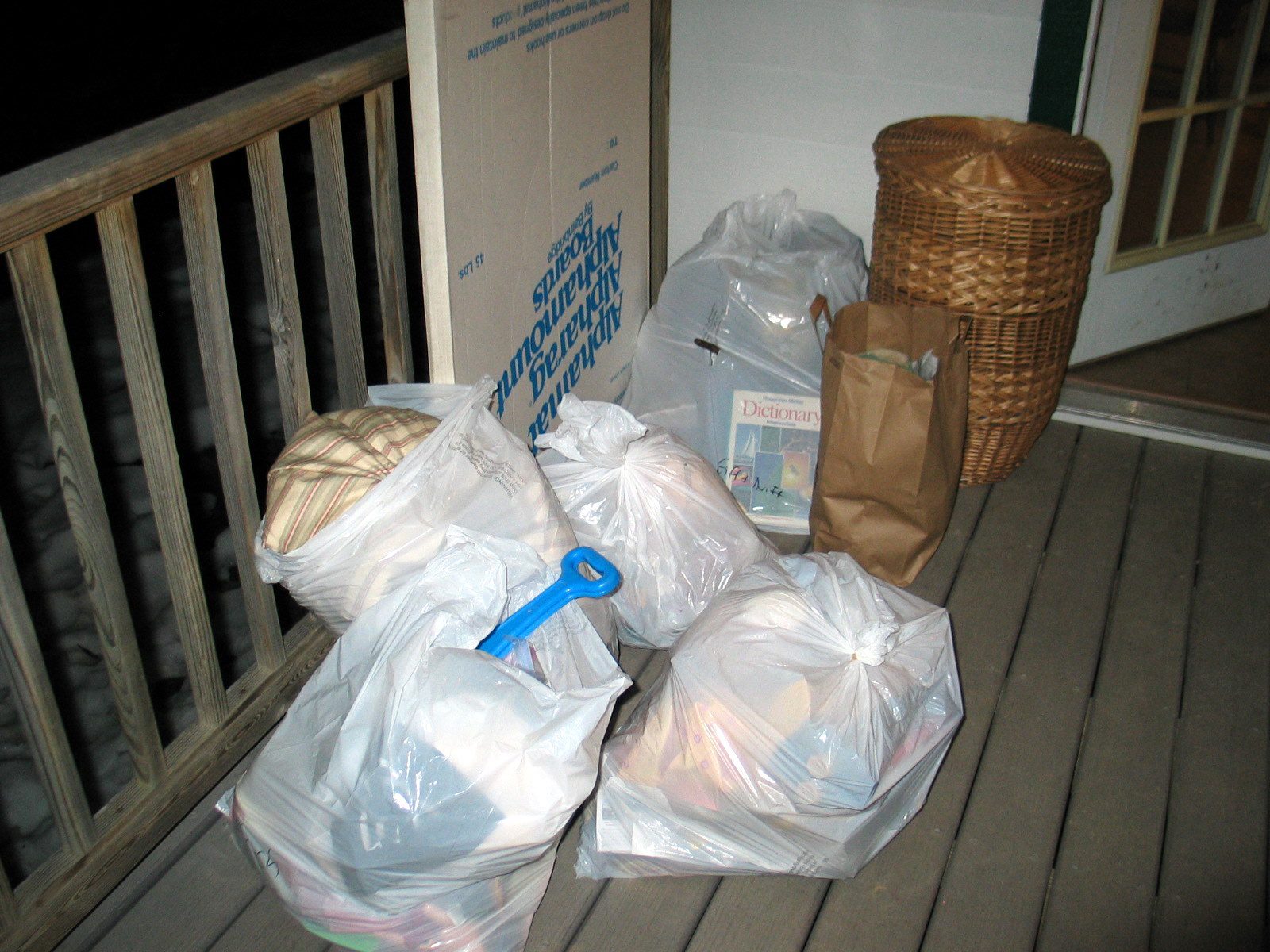 While I love material objects just as much as the next person, I am not a cling-to-things type person. Stuff doesn’t hold emotional sway over me, maybe because I have next to zero memory capacity and can’t remember where anything came from or who gave it to me.

But still, it’s (relatively speaking) hard for me to get rid of stuff. My friend Shannon and I were talking about GROS (Getting Rid Of Stuff) and she said that we all operate from a certain level when it comes to material objects. For example, I’m used to having my house feel a certain level of fullness; if I weeded and dunged-out my way to a more austere level, it would most likely soon fill back up till I reached my comfort zone baseline again. When I think back to all the different houses and apartments I’ve lived in, I can see that this idea holds true. Each place, no matter if it was 400 square feet or 1400 square feet, has been equally full.

When it comes to material possessions, I often think of my sister-in-law Sarah. She and her husband used to live in a 900 square-foot house with five homeschooled children. She told me that she allowed only certain kinds of toys—there was a large matchbox car collection, lots of blocks, and some books and art supplies. I may be missing something, but I think that was pretty much it. Each of the kids had a handful of outfits, and that was it.

(Oooo. Now that I wrote that, I’m suppressing a strong urge to run upstairs and start flinging all the kids’ clothes into garbage bags. My clothes, too. It’s nearly summer—we can all go naked.)

I don’t consider myself to be a packrat, and I don’t think we hoard excessive amounts of stuff (though certain people would BEG to disagree). Our home sports a total of five closets (one linen, one coat, one games and clothes and shoes, one for the kids and one for the grown-ups—none of them are even four feet wide, and not a single one is a walk-in). We have a little skinny basement (mostly for the freezers, canned goods, paint supplies, water heater, and animal food) and an unfinished attic that can be reached by climbing on a chair that’s perched on Yo-Yo’s desk and then by using the door as a toe-hold to boost yourself through the hole in the ceiling. It’s not exactly convenient. (Oh, and there’s a little closet under the stairs for toys.) But even with our limited storage, we manage to store many, many things that we never, ever use. 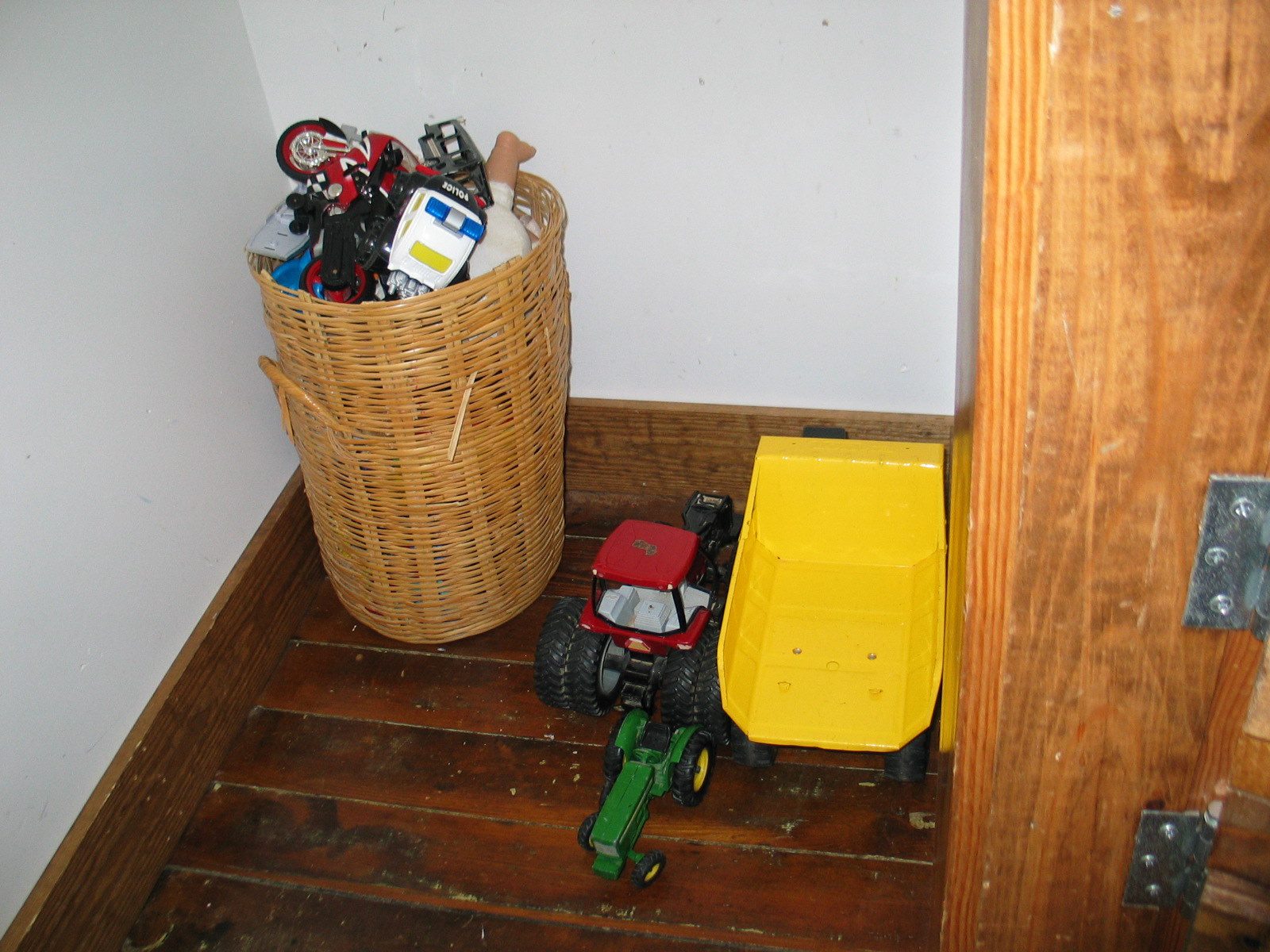 The toy closet under the stairs. I can see the floor!

I have no big goals for getting rid of stuff, but last night’s two hour rampage showed me that I do indeed have way more stuff than I need, want, or use. I’m thinking that I may just continue to dung out—a pair of shoes here, old sheet music there, extra pillowcases and books and craft supplies. As I go, I’ll free up space, shift things around, and make our living space more fully usable.

Or maybe I’ll just bask in the glory of eight bags in two hours and call it quits. We’ll see.

(Now, if I can just make sure my kids don’t see this blog post. Already I did the unthinkable: I downloaded my pictures while Sweetsie was near and she was on me like a fly on pie, “What’s that, Mama? What’s in those bags? When did you do that, Mama?” I closed the computer, stood up, and changed the subject. It worked, but there’s no guarantee it will work a second time.)

About one year ago: The wizard and my mom.