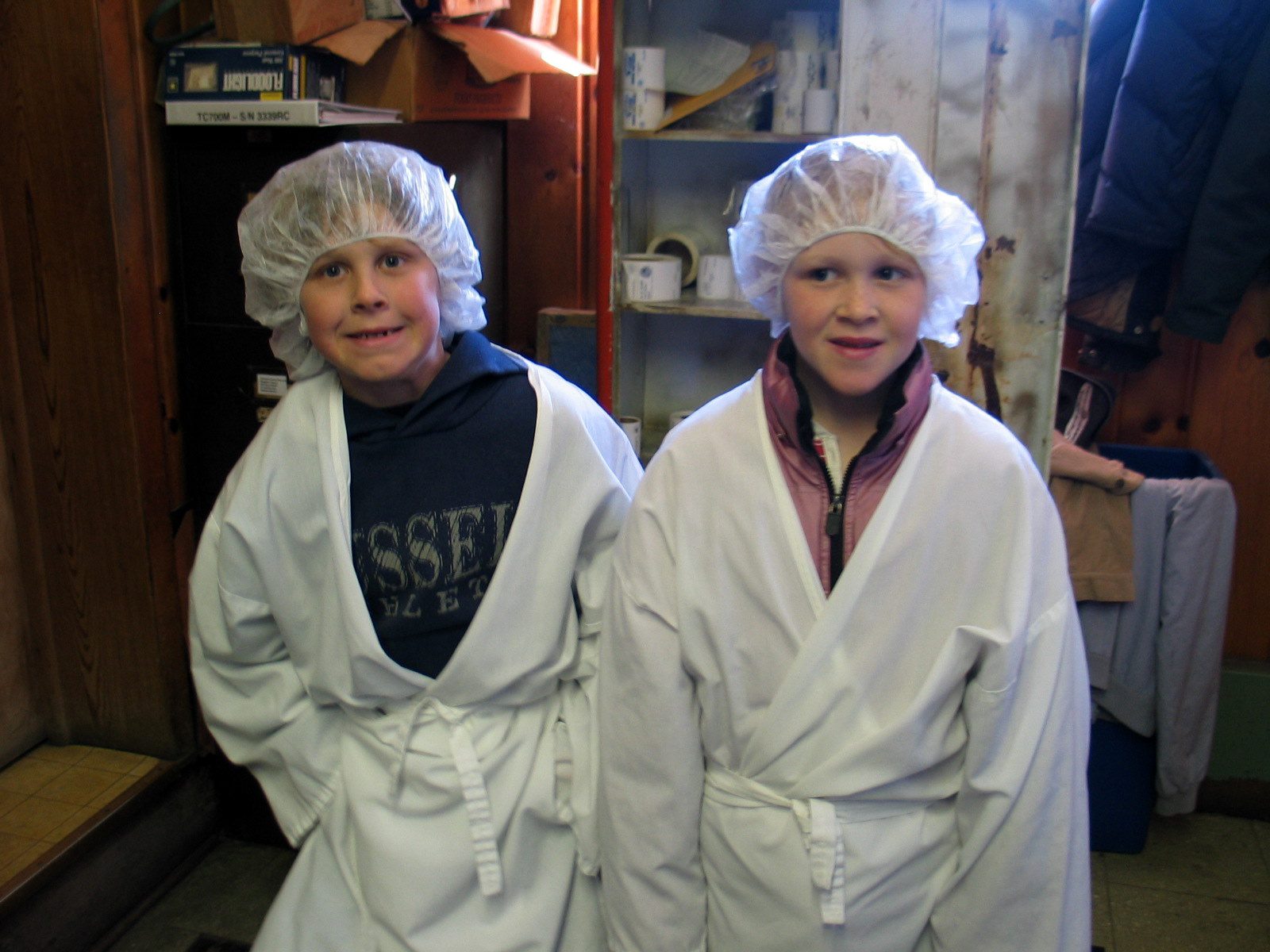 I don’t usually take my kids on scheduled field trips, unless you count a trip to the dentist as a field trip, and I don’t. My kids are still too young to cart along to lots of behind-the-scenes places (though the situation is improving with time, naturally), and besides, it’s a pain in the rear to make the phone calls and set the date and then get ourselves decently clothed and out of the house and into the car and into town and so on and so forth. It’s much easier to stay home and read books.

I’m prefacing this post so you will fully appreciate how revolutionary the following statement is: I took my kids on a field trip that I scheduled and planned all by myself.

I know, I know! It almost makes me sound like a real homeschooling mom! I am so proud of myself.

I took Yo-Yo and Miss Beccaboo to our local butcher shop. That’s all. It was low-key and simple and incredibly interesting. As Yo-Yo said when we got in the car to go home, “That was AWESOME!”

Remember back when I told you about that hole-in-the-wall butcher shop that I discovered? Well, I researched the place on the web and found out that one of the owners, Mr. Joe the Butcher, has a blog (the other owner was interviewed in Food Inc.). In his blog he recounted a tour he gave to local students, and it was then that I hatched a plan. The next time I was in the store, I accosted Mr. Joe the Butcher and asked if he would give me and my kids a tour of the place.

I talked to him a few weeks later to set up the appointment and he asked me again, “Now do you want to see the actual killing?”

“Yes,” I said, though I was beginning to feel a bit unsure. Was this a bad idea?

I started getting nervous in the days leading up to the trip. What if my kids freaked out? What if it was overwhelmingly gory and I couldn’t stomach it? What I was scheduling a date with Disaster? I tamped down my worries and only briefly mentioned them to Mr. Handsome the night before the trip. But after rattling off all my concerns, I countered myself, saying, “But we eat meat and they should see where it comes from and if it messes them up for life, so be it. But it won’t mess them up.”

“Sounds like you’ve got it all figured out,” Mr. Handsome replied, bemused.

We met Mr. Joe the Butcher (who isn’t actually a trained butcher, it turns out, but rather a Harvard graduate trained in environmental landscaping, or some such thing, that is worlds apart from slaughtering animals) in the retail store where Miss Beccaboo shyly handed him a loaf of freshly baked sourdough bread. After taking us to a back room where he outfitted us in snazzy white coats and hairnets, he gave a little speech. “You’re going to see a lot of different stuff out on the floor, and some people don’t like to see these things. Most people, though, find it very interesting. However, if you find it bothers you, you can step out, and that’s just fine.” And then he pushed open the door and we headed through the cutting room on our way to the killing floor.

As soon as passed through the swinging doors, our senses were assaulted: boiling water, steam, glinting knives, blood, hoses, chains, carcasses, buzzing saws. Pigs here, pigs there, gigantic piggies everywhere! There was one pig dangling from one hoof, the blood spurting from its neck. Another monster pig was laying in a trough-like table, a couple men carefully slicing off its hide and hooves. Yet another pig was hanging by a chain, being rapidly gutted by a knife-wielding wizard. There were skinned pig heads lined up on a rack, tongues hanging out.

We didn’t know where to look first. Should we examine the intestines spilling about of one of the pig’s abdominal cavities, or should we watch the hoof-cutting-off process? Wait, one pig was being hoisted up while its hide was anchored to a chain from below—as the pig rose higher, it slipped out of its hide—pretty darn cool.

It turned out that the most exciting spot, the knock box, was at the far end of the room. We watched as a man in a heavy rubber apron slit an already dead pig’s throat and leaped backwards to get out of the way of the flowing blood. And there was a live pig in the knock box, too! Another man loaded a black tube that looked just like a thicker-than-normal telescope. “Look, guys,” I hissed. “He’s going to shoot the pig!” The man put the telescope thing up to the pig’s head, there was a dull bang, the pig squealed (in Yo-Yo’s words, “It roared like thunder”) and reared back, and then stood there all normal-like.

“Um, I don’t think it worked,” I said. (Later I learned what had happened from the killing man himself. He said the pig moved his head and so the bullet [is that what it’s called?] hit a thicker part of the skull and slipped off. They have really hard heads, he said. You have to hit them exactly right or it doesn’t work.) (Now I wonder, what happened to the misfired bullet? Can they ricochet? Should we have ducked or something?) (Mr. Handsome read this and said I had it all wrong. After doing some research, I know now that the guy was using a captive bolt pistol and that there were no “bullets” involved.)

The shooting man walked back around to the loading spot and loaded a gun (though I couldn’t see what it was from where I was standing). This time around the kids, wide-eyed, stuck their fingers in their ears. There was a loud crack and the five-hundred pound pig dropped heavily to the ground.

It kicked for awhile, which surprised me. I know all about headless (or slitted) chickens kicking wildly, but for some reason I never realized that larger animals would do the same thing. Truth be told, it made a small racket that I found a little unnerving. But then Mr. Joe the Butcher explained to the kids (he always talked directly to them) how when animals are alive, their brains keep their muscles from twitching and jerking around every-which-away, but when dead, the brain no longer sends the message Be Still Ye Muscles and so the muscles go all haywire. The animal was very much dead, he assured us. (Or rather, in light of the above information about the captive bolt pistol, soundly unconscious.)

I asked if we could see the organs, so we went over to a big table by the inspector (the inspector is present on every killing day to check all the animals) where he pointed out the liver and tongue and the heart. “It’s still beating, see?” he said. Sure enough, the muscle was contracting rhythmically. “How long will the muscles keep twitching,” Yo-Yo asked. “Oh, maybe about thirty minutes,” he replied. “Even an hour or two later you can sometimes see the other muscles move a little.”

There was a head on the table. He explained that they use the cheek fat/meat to make ponhaus, a local delicacy. We examined the eyeballs, and the dark hole in the skull, the spot that marked the fine line between life and death.

The ceiling was crisscrossed with a web of metal rails. Wheels ran along the rails and hooks dangled from the wheels and whole carcasses hung from the hooks. Via this pulley system (it reminded me of the doors in Monsters Inc, the meat like the doors swinging freely as they hung from a moving conveyor belt), the carcasses moved from gutting station to the hosing-down-and-weighing station and then on into the coolers.

And that’s where we headed next, the coolers. Rows of beef and goat and lamb hung from hooks, their livers and hearts and tongues reattached to their sides with another hook. We squeezed past a long row of chilled pork, the unmoving limbs knocking against our arms and hips, to the other end of the cooler where we paused to examine a side of beef. The kidneys were still attached (and I learned that pig kidney fat makes the best lard for cooking because it melts at a higher temperature—pie crusts, yum), and he pointed to the cavities for the stomachs and lungs and intestines. He showed us the huge diaphragm muscle and explained how it works. We examined the spliced-in-half backbone. He counted off the ribs to show how they know where to cut each half in half. “When we get a quarter beef,” I told the kids, “this is how much it is. And it lasts us for a good part of a year, too.”

Our last stop was the huge room where they cut, grind, and package the meat. Like on the killing floor, the room was abuzz with workers. One worker was spraying out a huge vat that had been used to mix hot Italian sausage, and another worker was using a cool-looking squirt machine to stuff the sausage into bags. There were boxes of chickens (not butchered on site) waiting to be twice-ground into organic dog food, bones and all.

At a large table, several men were cutting up the chunks of beef. One was deboning it, another was sawing it and then scraping off the sawdust-like bone shavings that dotted the meat. The man closest to us was in charge of taking the quarters of beef as they came out of the cooler and cutting them down to size. He hoisted a huge hunk of beef onto the table and then he paused for a minute, pondering it. “He’s trying to figure out the best angle to cut it,” Mr. Joe the Butcher explained. This was more than just hacking meat up into uniform sizes, I could see. It was an art form.

The tour was over all too soon. We shed our coats and hats, and Mr. Joe the Butcher asked the kids if they had any more questions. Miss Beccaboo pipped up. “Can we see the animals in the barns?” He had to move on, he said, but we could go out by ourselves. (Apparently he trusted that we weren’t undercover PETA agents on a mission to set the animals free.) There was just one pen with some pigs out back, and we eyed them warily (and vice versa) for a few minutes before heading back to the car.

The kids were pumped, blown away by all we had seen. Their favorite part, by far, was the killing floor. Miss Beccaboo said, “It was different than what I expected. I thought we would be right there when they were doing each thing.”

“You mean, instead of watching from one end of the room?” I asked.

“You would want to be right beside the pig when they shot it?” I queried incredulously.

“No, not that part. But I wish I could’ve been closer when they stuck it.”

You know, the biggest surprise, second only to observing how un-upset my kids were (which didn’t totally surprise me, though it did relieve me considerably) was this: instead of being sick to my stomach, the whole tour made me crave meat. I couldn’t stop thinking about juicy steaks and filet mignon. Weird.

The only problem is this: I just inadvertently set the bar for field trips pretty high. What could possible top a trip to a killing floor? Taking suggestions….

About one year ago: Using my food dehydrator to turn out yogurt in bulk.