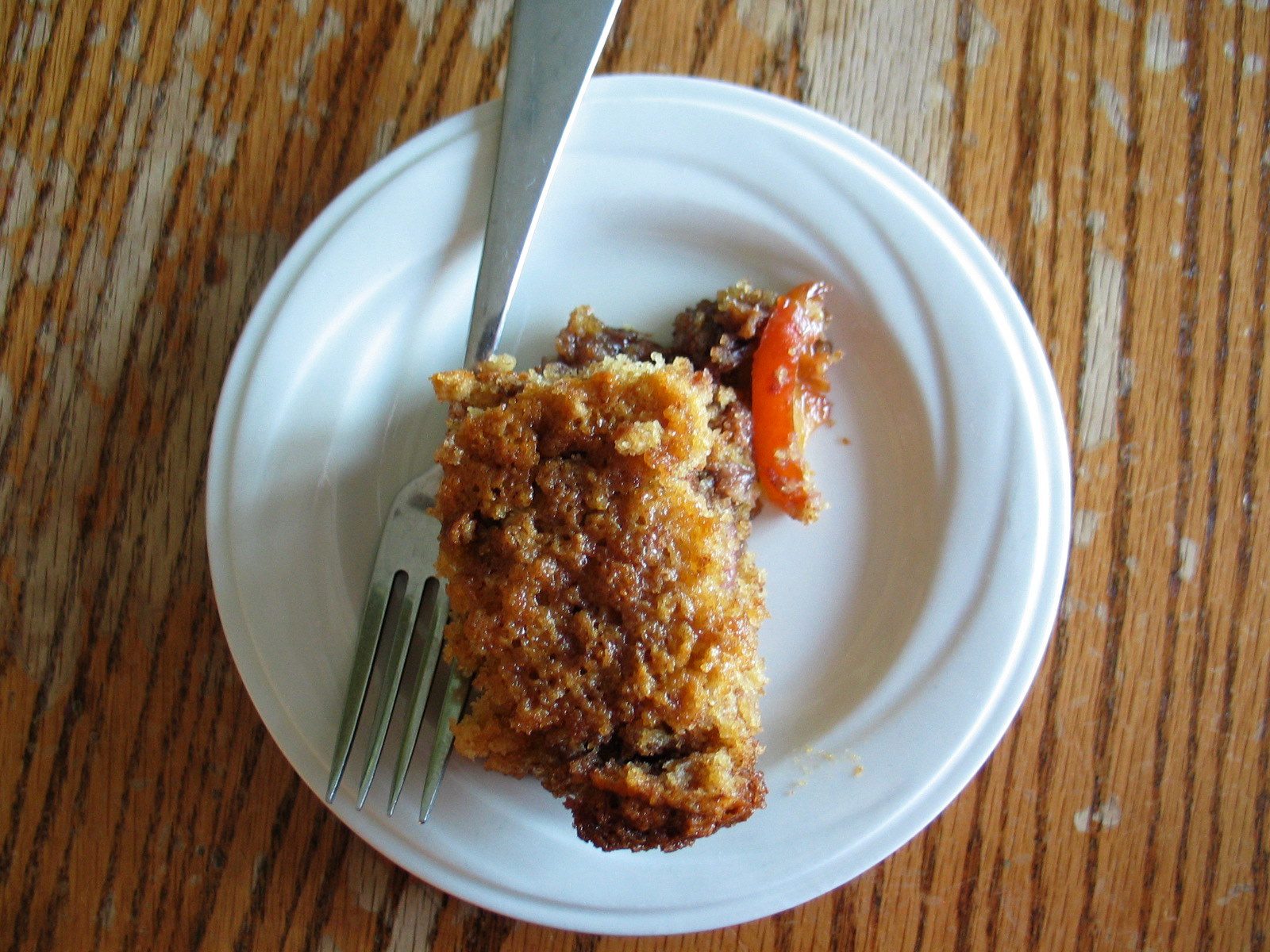 Continuing on with foods I’ve made but never posted. There are so many! (I think I’ve already mentioned that before, but still, it bears repeating.)

These posts are kind of therapeutic. They make me feel like I was once, a long time ago, productive. It’s a resting-on-my-laurels-type post. Not that anybody gave me any laurels when I first cooked these dishes. But still.

Enough of the empty chatter. Let’s get on with the food.

Oh, and one more thing. There is nothing healthy in this post, and almost everything was a flop. If you want to go hang out at some other place in bloggyland, I’ll understand.

Okay, now where is that “unposted food” folder? Ah-ha, here it is.

Nectarine Coffee Cake. Too sweet, too gooey, too bland, too yuck. 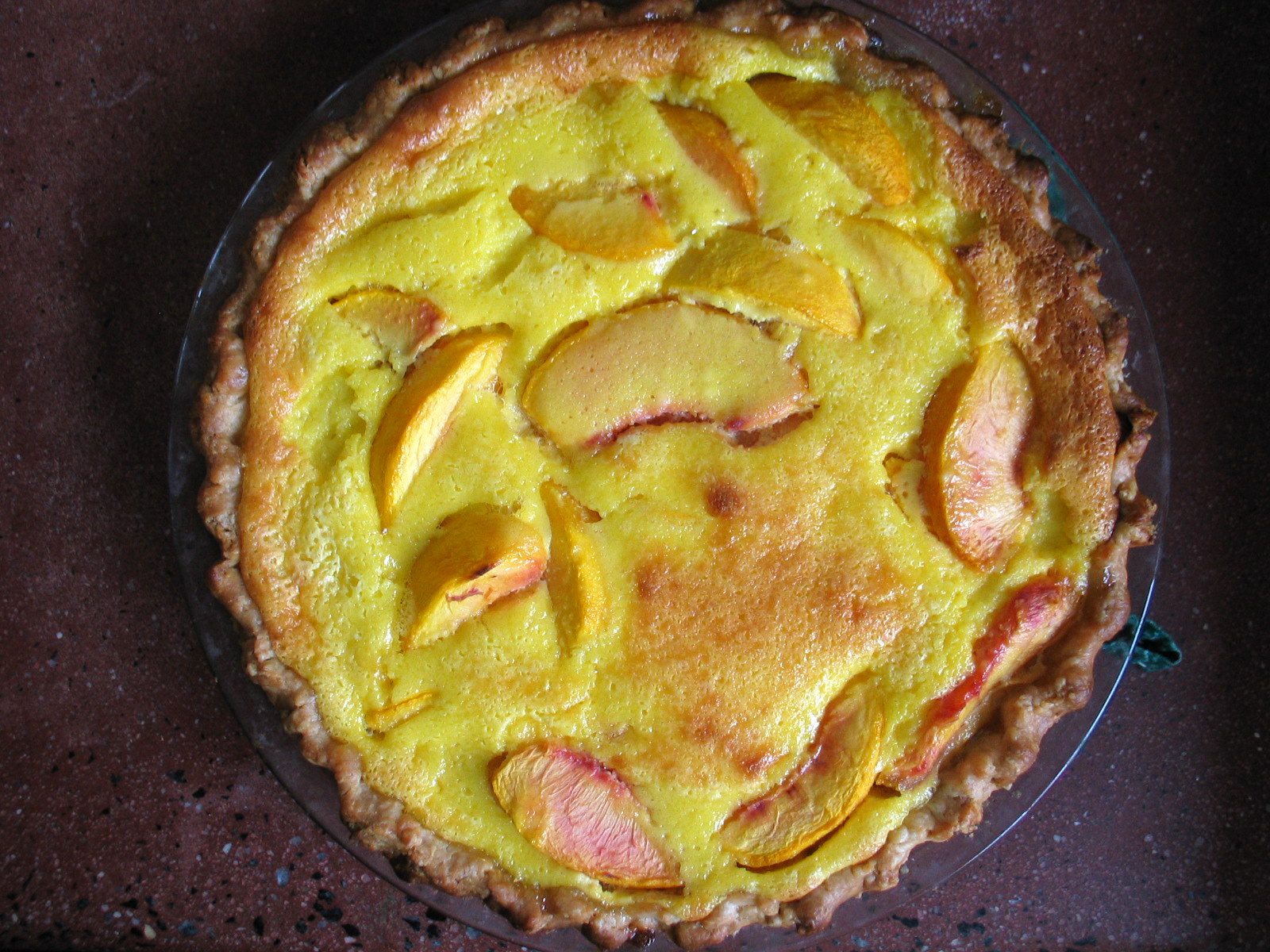 I can’t quite tell from where I’m sitting, but I think this is a Sour Cream Nectarine Pie. Or maybe it’s peaches instead of nectarines. In either case, it was no good. Perhaps the sour cream curdled, but I’m not sure about that. 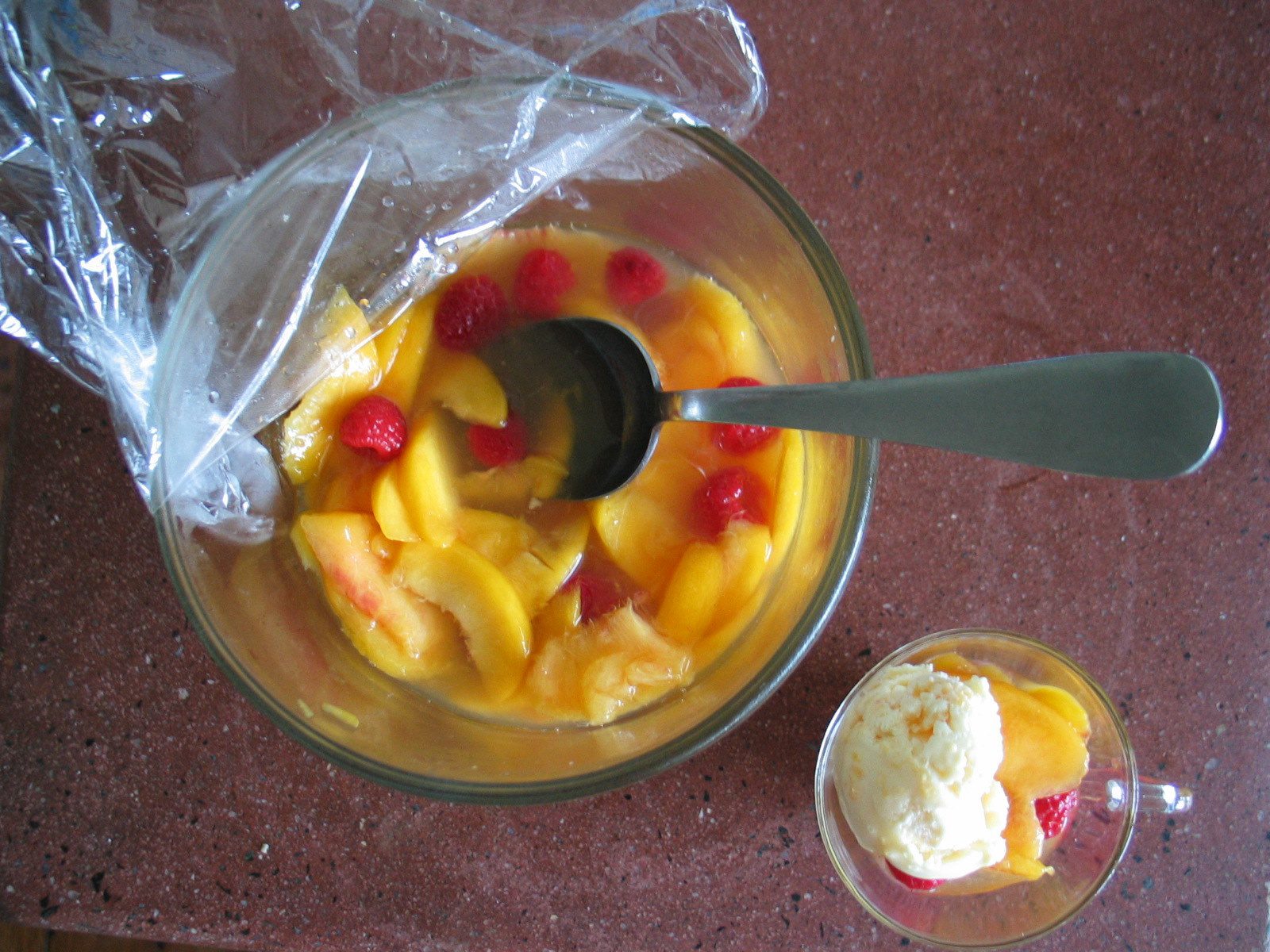 Peaches in White Wine, with a couple red raspberries thrown in for color and Just Because. I liked it, but not too much. I enjoyed it more when I added a scoop of vanilla ice cream on top. Then it was like a fruity-wine-y ice cream float. Come to think of it, I really did like that combination. Maybe I’ll try it again next summer. 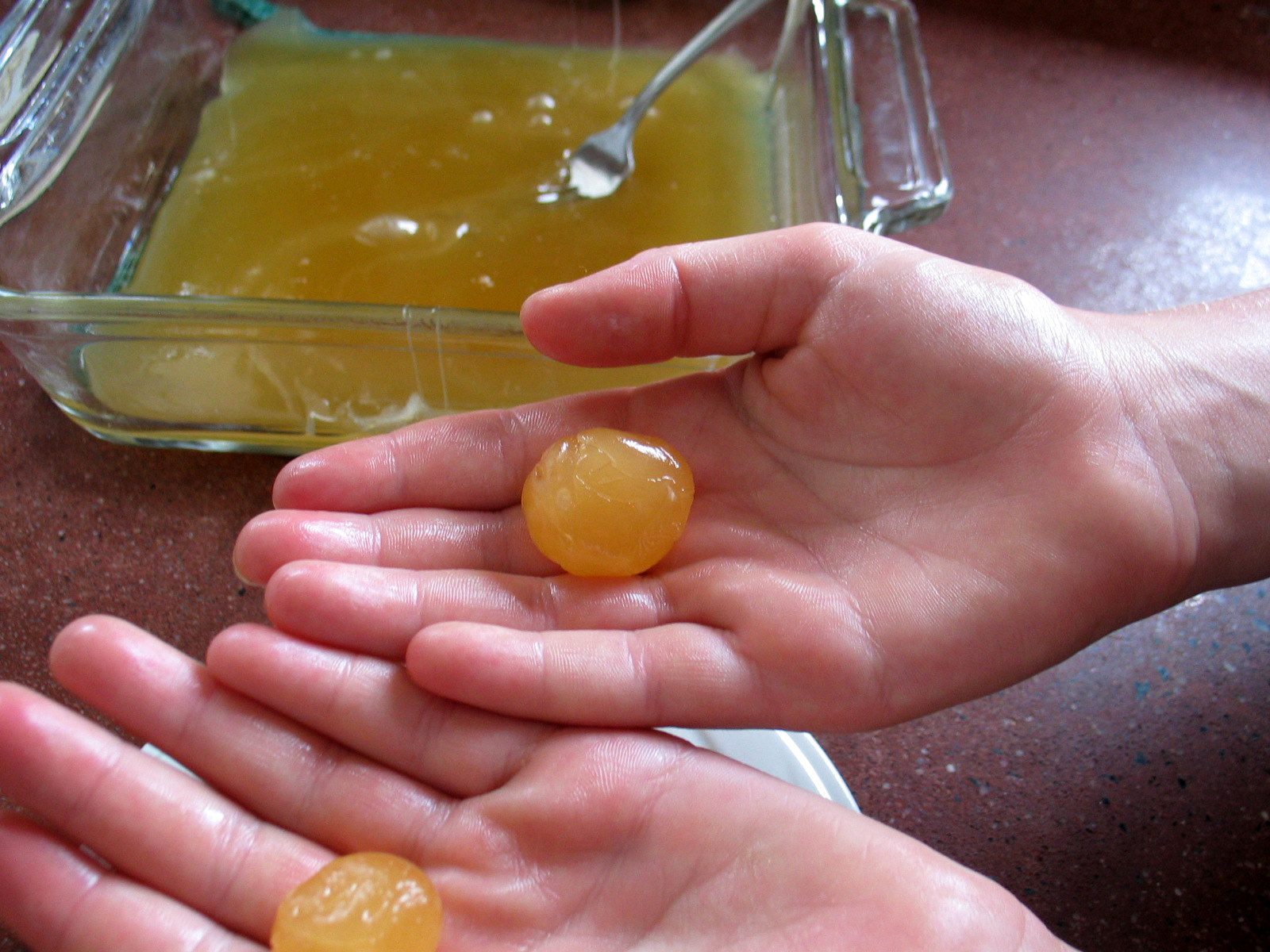 What do you think these are? I’ll give you three guesses.

Before you go any lower, I’ll tell you what it is: Vinegar Candy. I think it came about after the pickled taffy event. Yo-Yo was repulsed by the sinus-cleansing vinegar smell that infiltrated the whole house, so I informed him that there is a candy that’s made out of vinegar. Of course he wanted to try it. He made it twice; the first time we undercooked it. He ate a bunch, but the majority went to the compost. 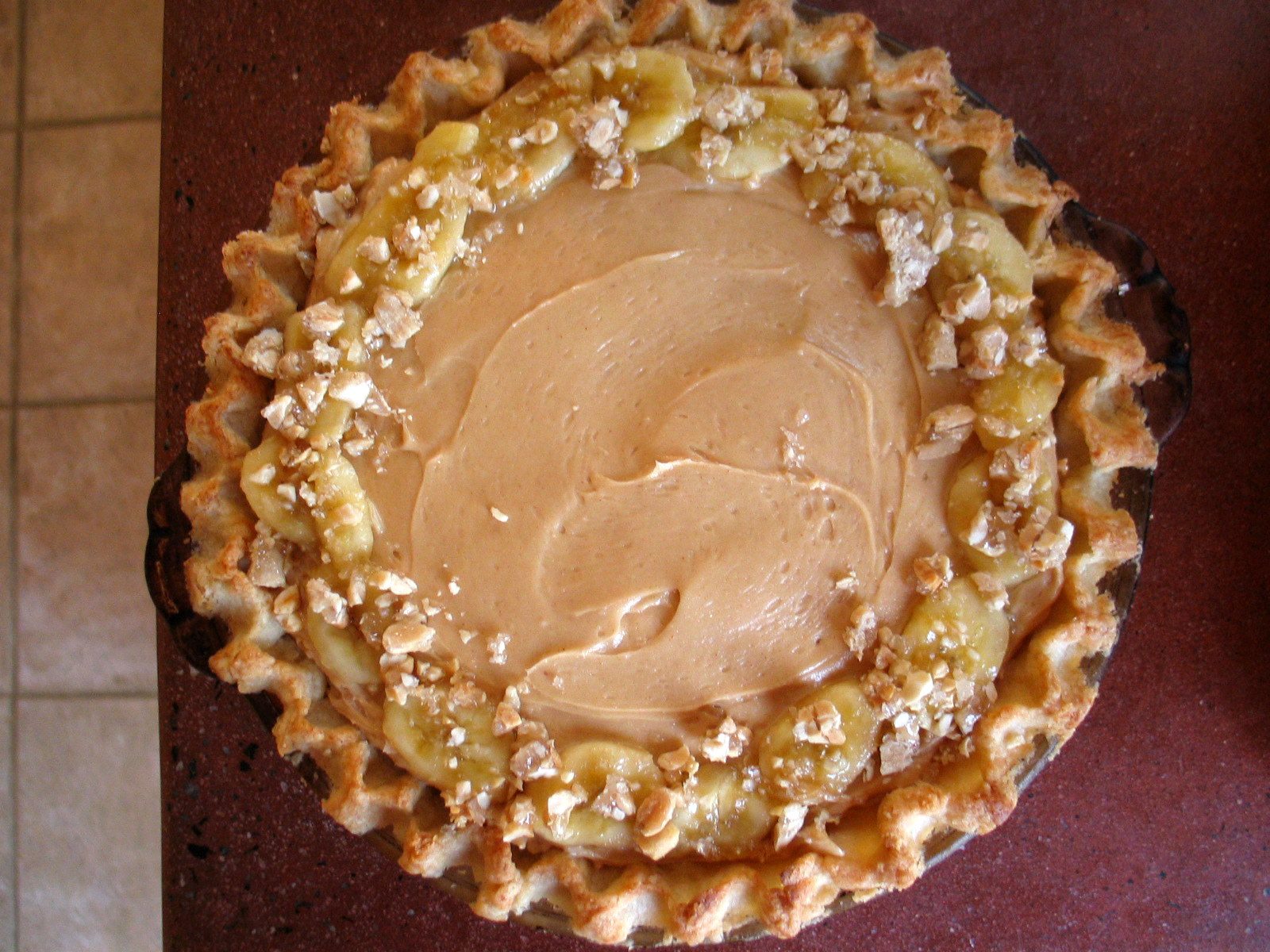 Peanut Butter Banana Pie. Just all around totally disgusting. Period. If you want a peanut butter pie, make this instead. 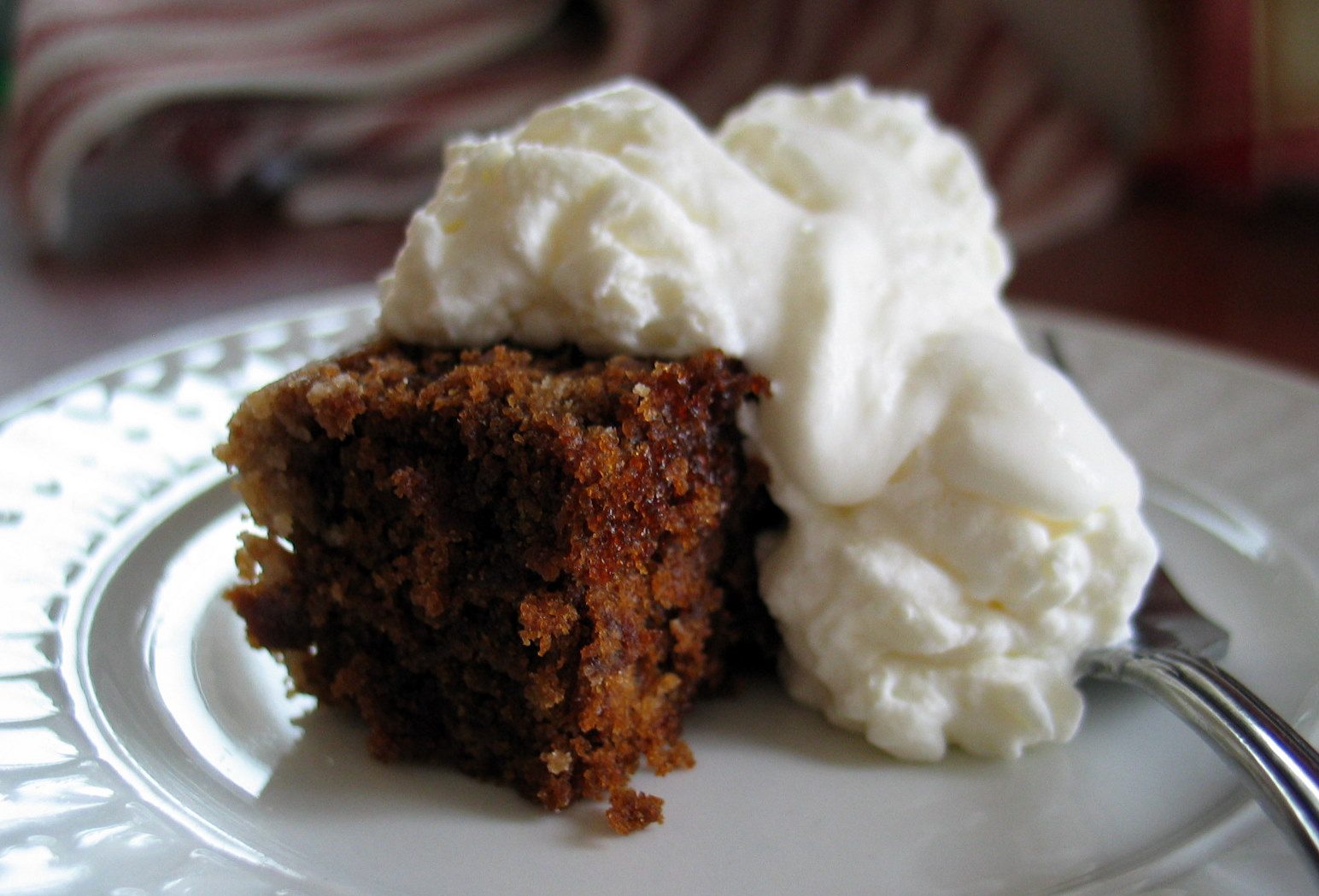 Glorified Gingerbread. I made this when I was floundering around trying to discover my shoofly cake recipe. It was certainly no shoofly cake, but it was a very fine gingerbread, better than the one I already posted. But wouldn’t you know, I returned the cookbook from whence it came to the library before I copied the recipe down. Shame! 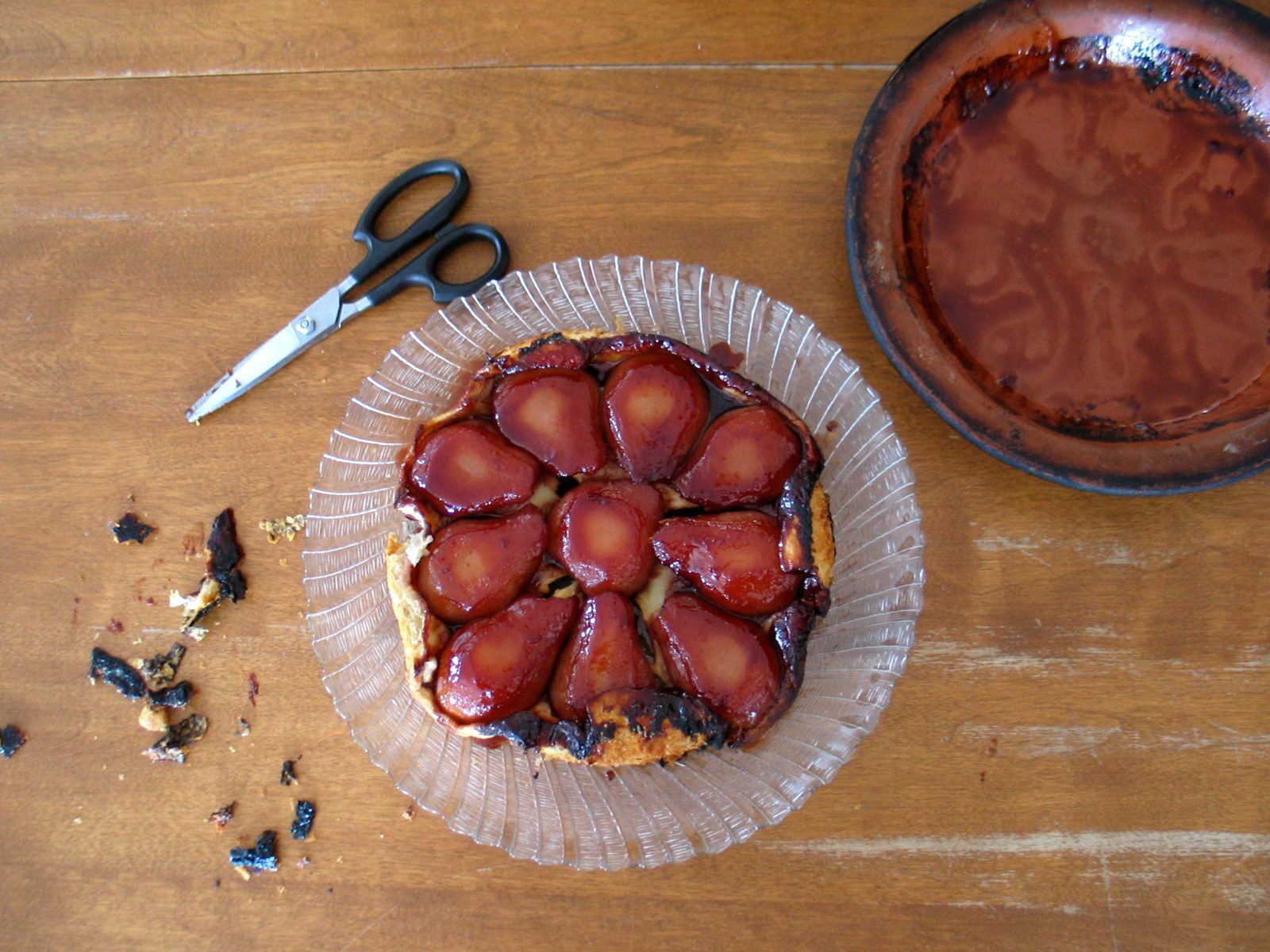 Ah, now this. This is a Red Wine Pear Tartin, and it was lovely all around. It was lovely to prepare (a reduced cinnamon-spiked and buttery red wine sauce, oh my) and lovely to eat. In fact, we ate all but one piece in one sitting. There was plate-licking involved. 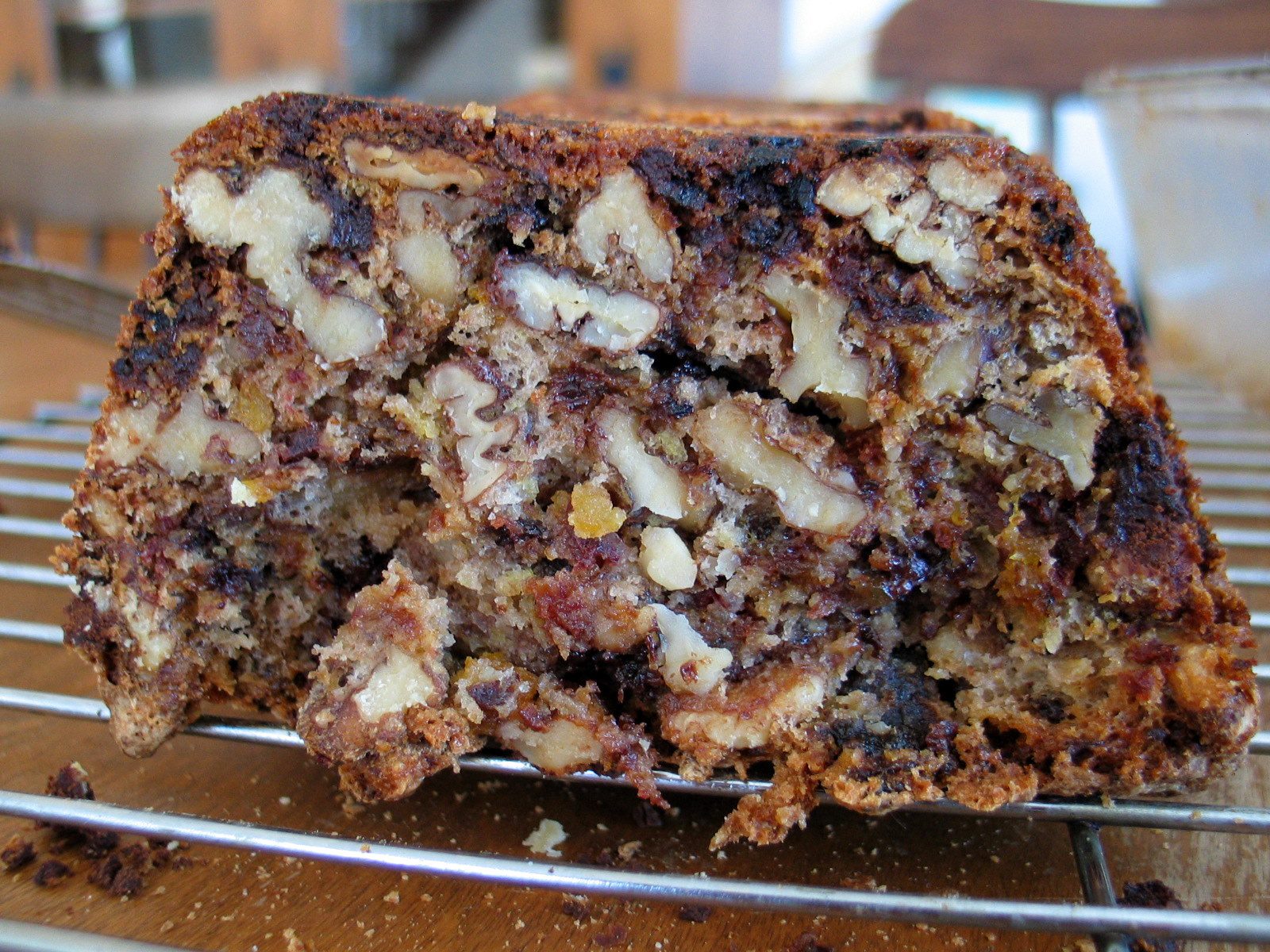 Date-Nut Loaf. I first ate this at a friend’s house and loved it, but I changed it up a bit (too much so?) when I made it myself and as a result didn’t appreciate it as much. Instead of dates, I used some of these that I had made and didn’t like (perhaps this is a bad starting place—using something I already don’t like as the foundation to another recipe?) and it just wasn’t the same. I don’t know how I could’ve expected it to be, under the circumstances. 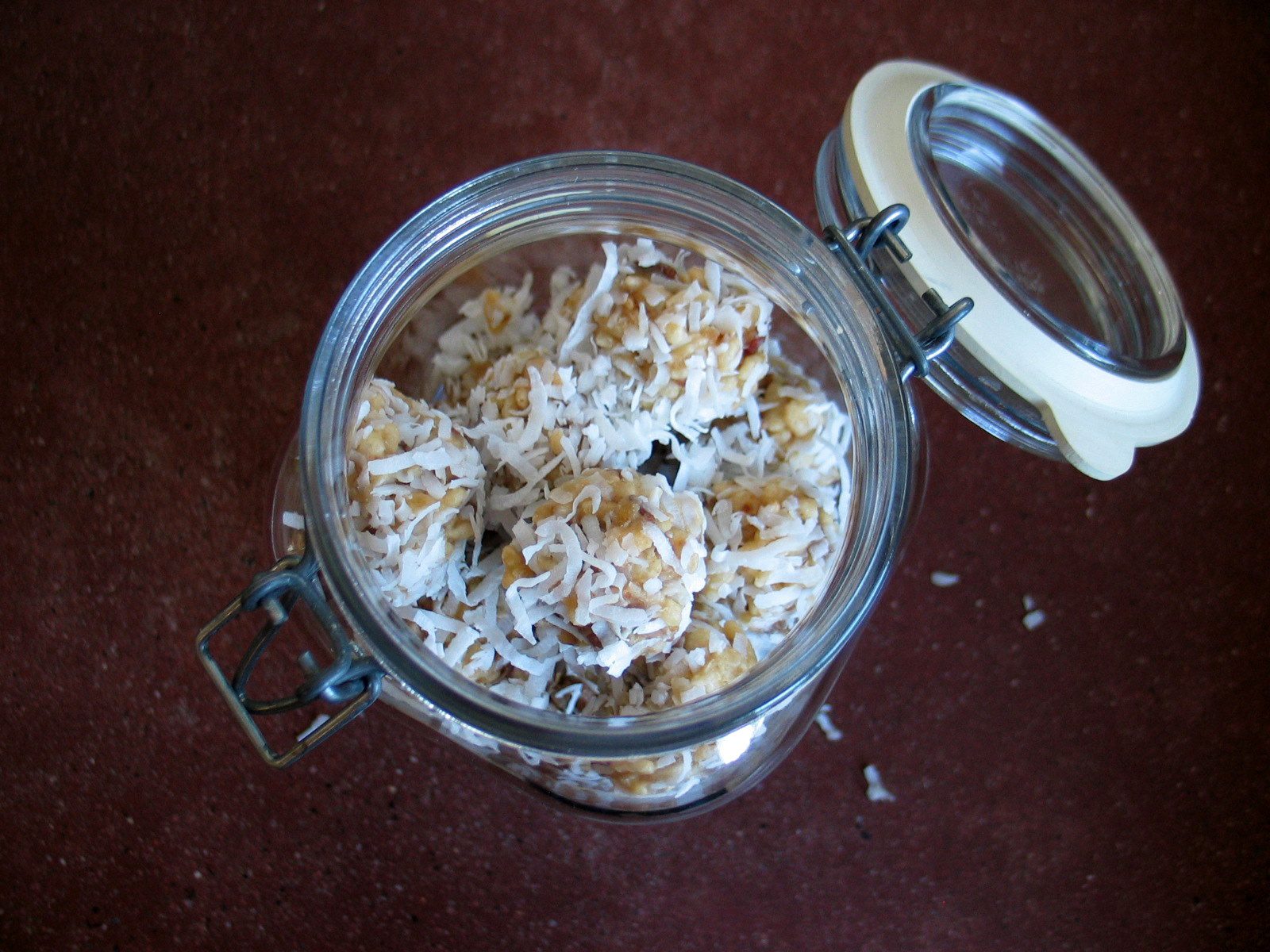 Date Nut Balls, from a recipe that MAC gave me. These were good. Mr. Handsome adored them, actually. They are addictive—crunchy, chewy, caramelly, coconutty, yum-yum-yummy-yum-yummy. 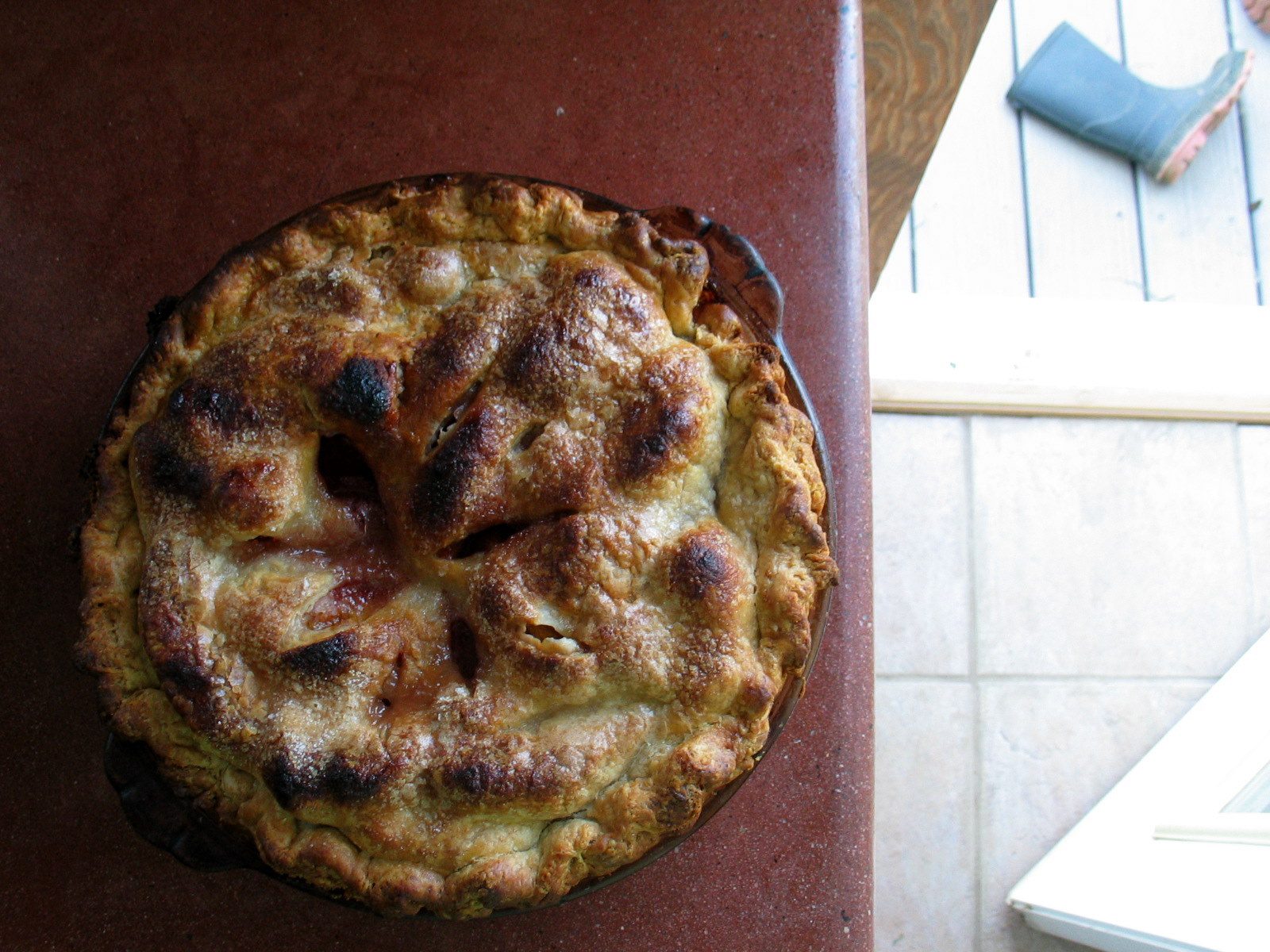 Once again, it’s hard to tell what this is exactly, but I think it just might be a Caramelized-Nectarine Pie. I can tell because of the black boot lying there on the deck. I don’t think we liked this. There was too much crust and too little fruit and the fruit there was was bland. 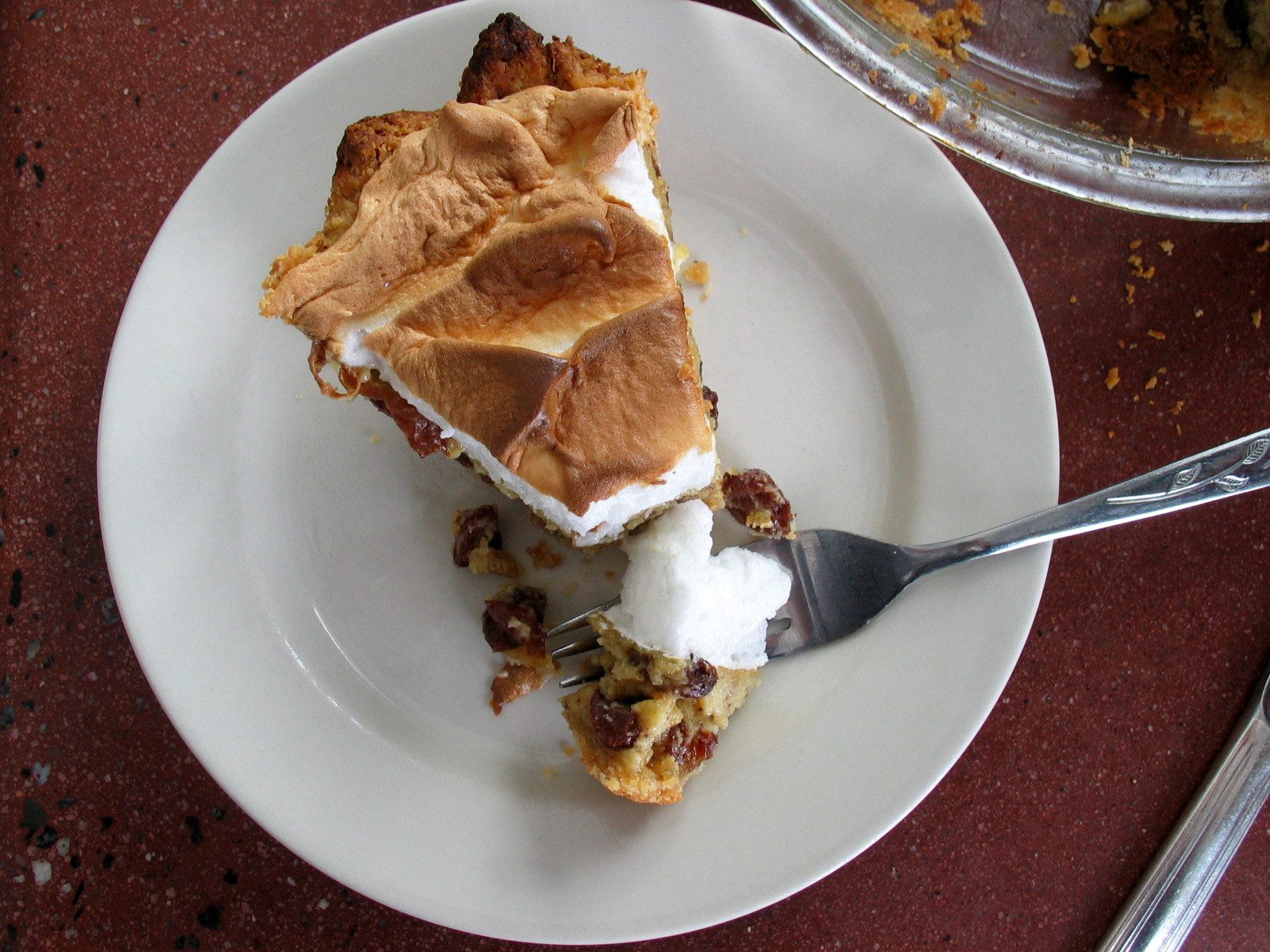 Sour Cream Rum-Raisin Pie. This was a recent creation. We didn’t like it. The rum was too rummy, the raisins too raisiny, the meringue too meringue-y. But the concept was really neat so I have plans to play around with it. I have twenty-some quarts of raisins in the freezer, so I kind of have to find a good pie recipe. Any suggestions? 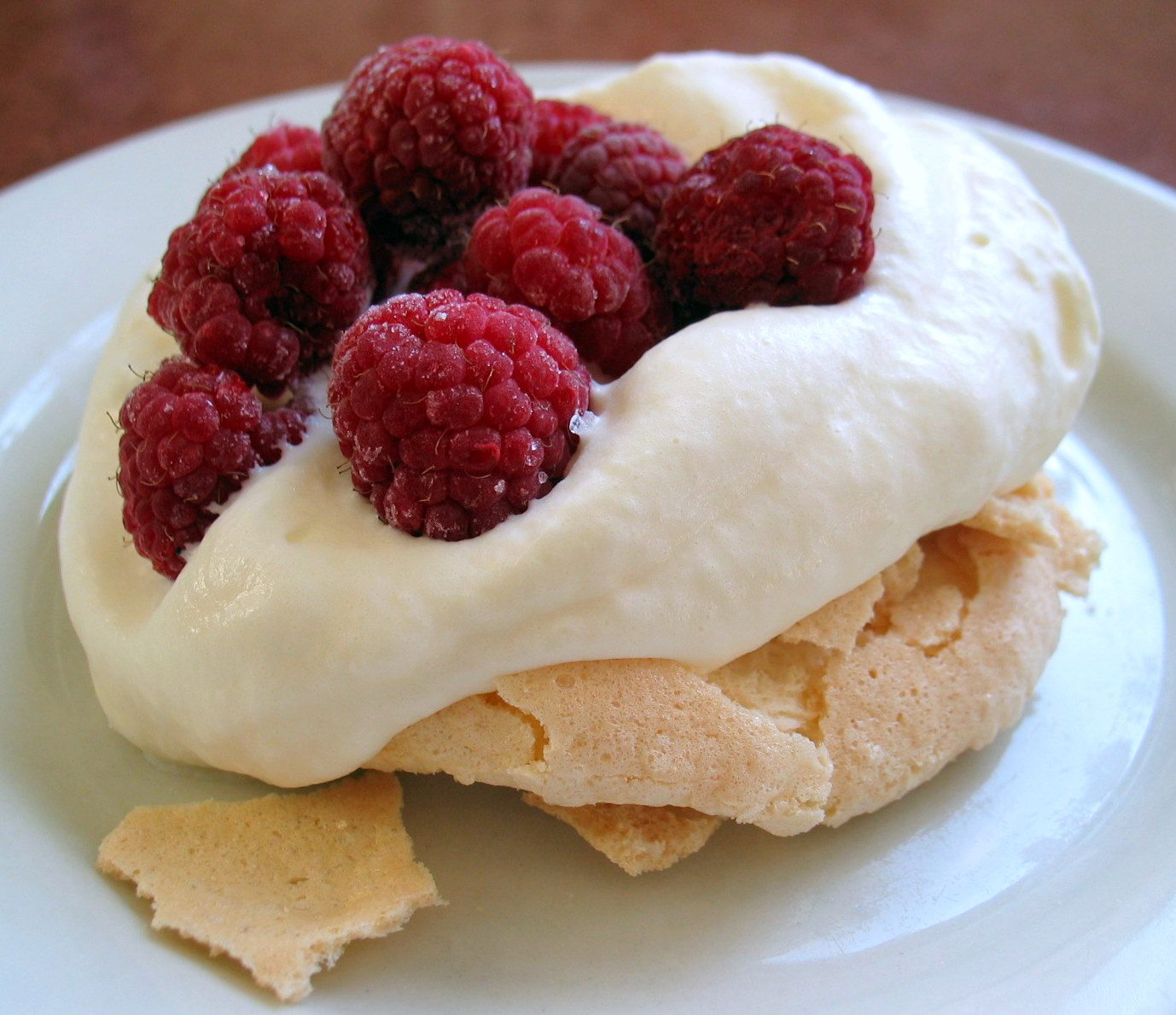 These are the Mini Pavlovas that I told you about. They were delicious. 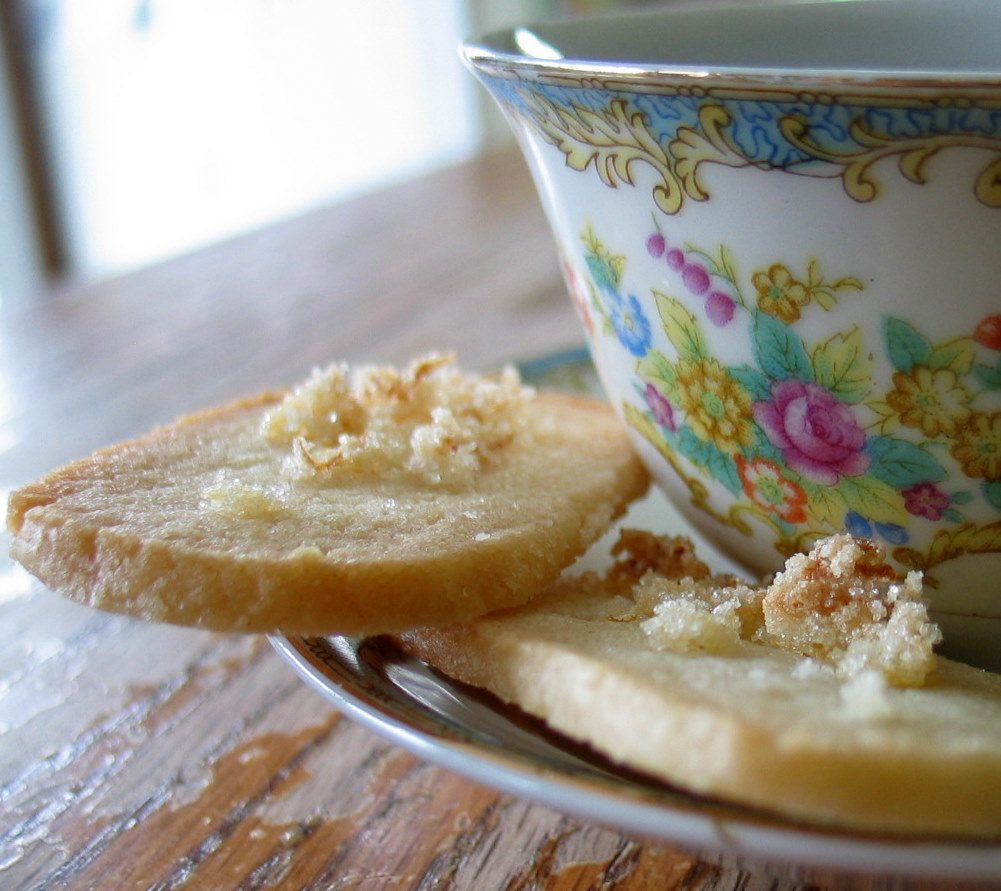 Lemon Tea Cookies. I used to make these when I was a kid. Lemon-y and buttery and thin and crispy, these are very good. The dough is shaped into logs and then sliced, and each slice is topped with a sprinkling of sugar-lemon zest mixture before baking. They’re addictive. 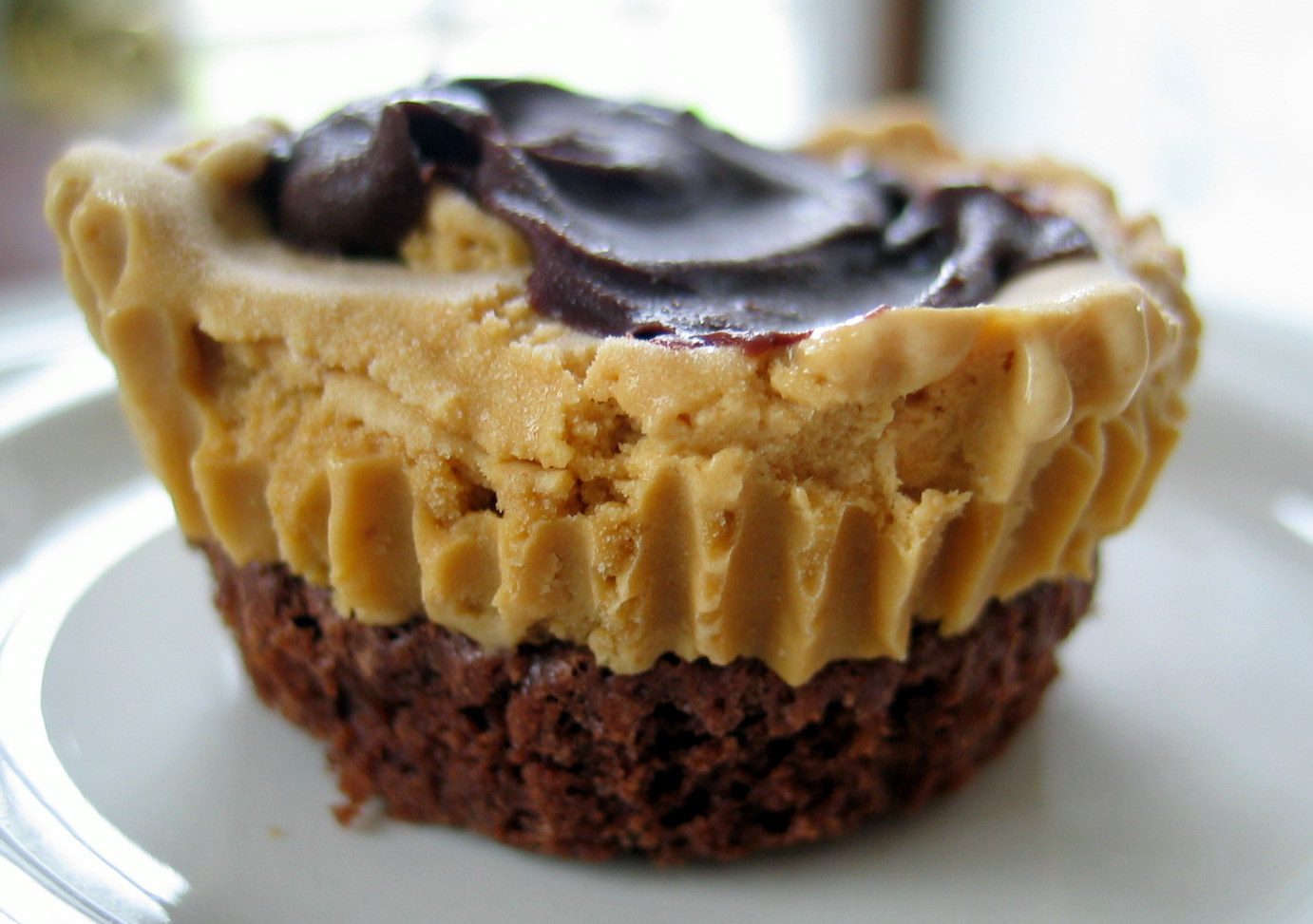 Joy Cupcakes. These come from Joy the Baker. Overall, I haven’t been impressed with her recipes (though the honey-whole wheat cake I got from her has justified all the time I’ve spend skimming her posts), but this one, though a bit too time-consuming, was tasty. The process is simple: make a thin layer of gooey brownie in the bottom of a lined muffin tin (do not over-bake), freeze it, top with ice cream of your choosing (I used mint chocolate chip and butterscotch), freeze, and then top with a creamy ganache and freeze again. 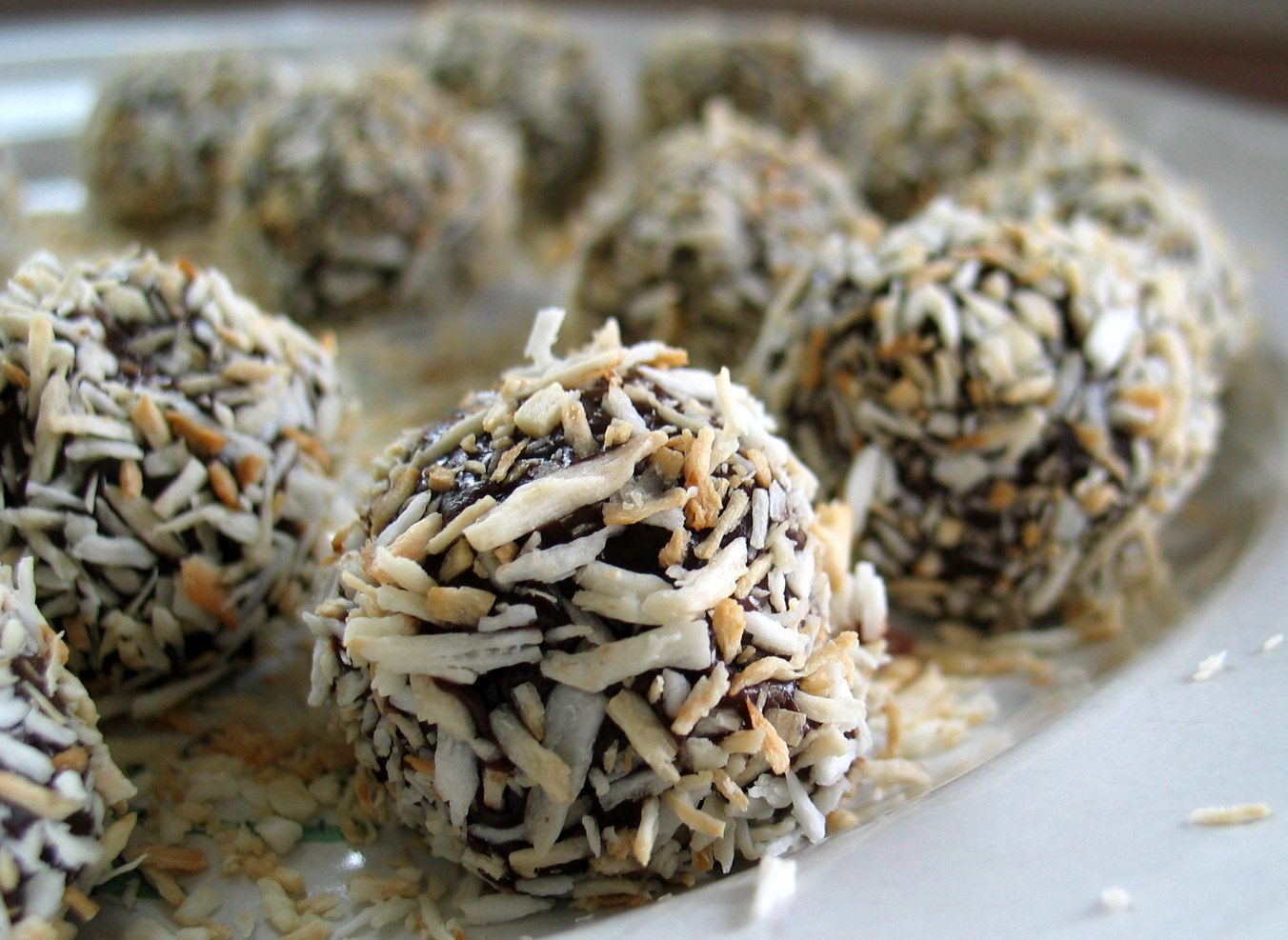 Chocolate Truffles. I made several kinds, but in this picture you’re looking at rum-coconut. I wasn’t sold. 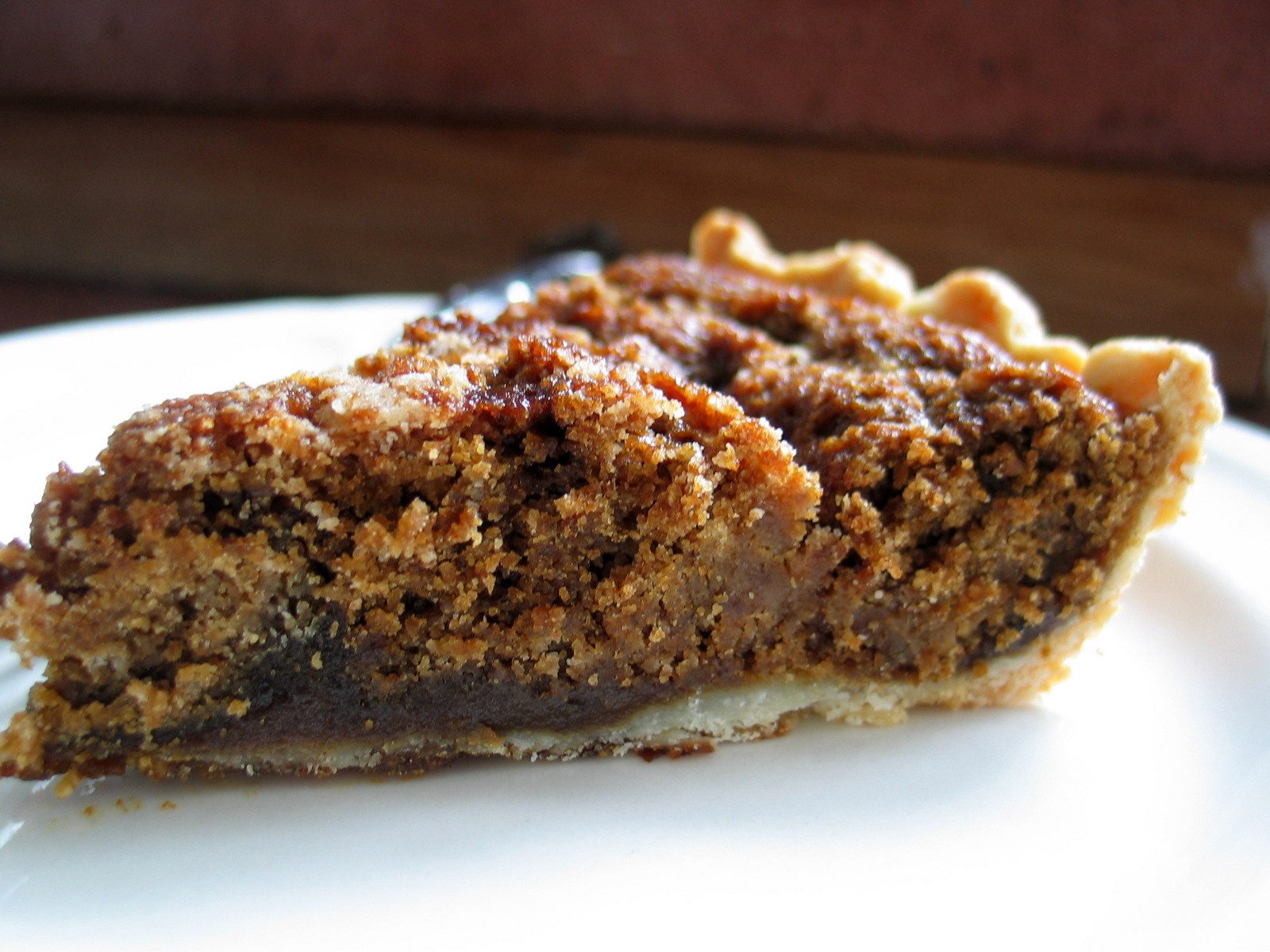 Shoofly Pie. This recipe came from The Pie and Pastry Bible and it involved coffee, cinnamon, and nutmeg, as well as molasses. It was quite exotic, but it wasn’t what I was looking for.

And that wraps it up for today. If you’re the type of person who puts on weight via your eyeballs, I’m sorry. And I’m sorry that you wasted valuable calories on such unspectacular food. Well, except for the pear tartin. That was worth every single calorie.

Next time I’ll post something with green in it. Maybe.

About one year ago: Reverse Cleaning.