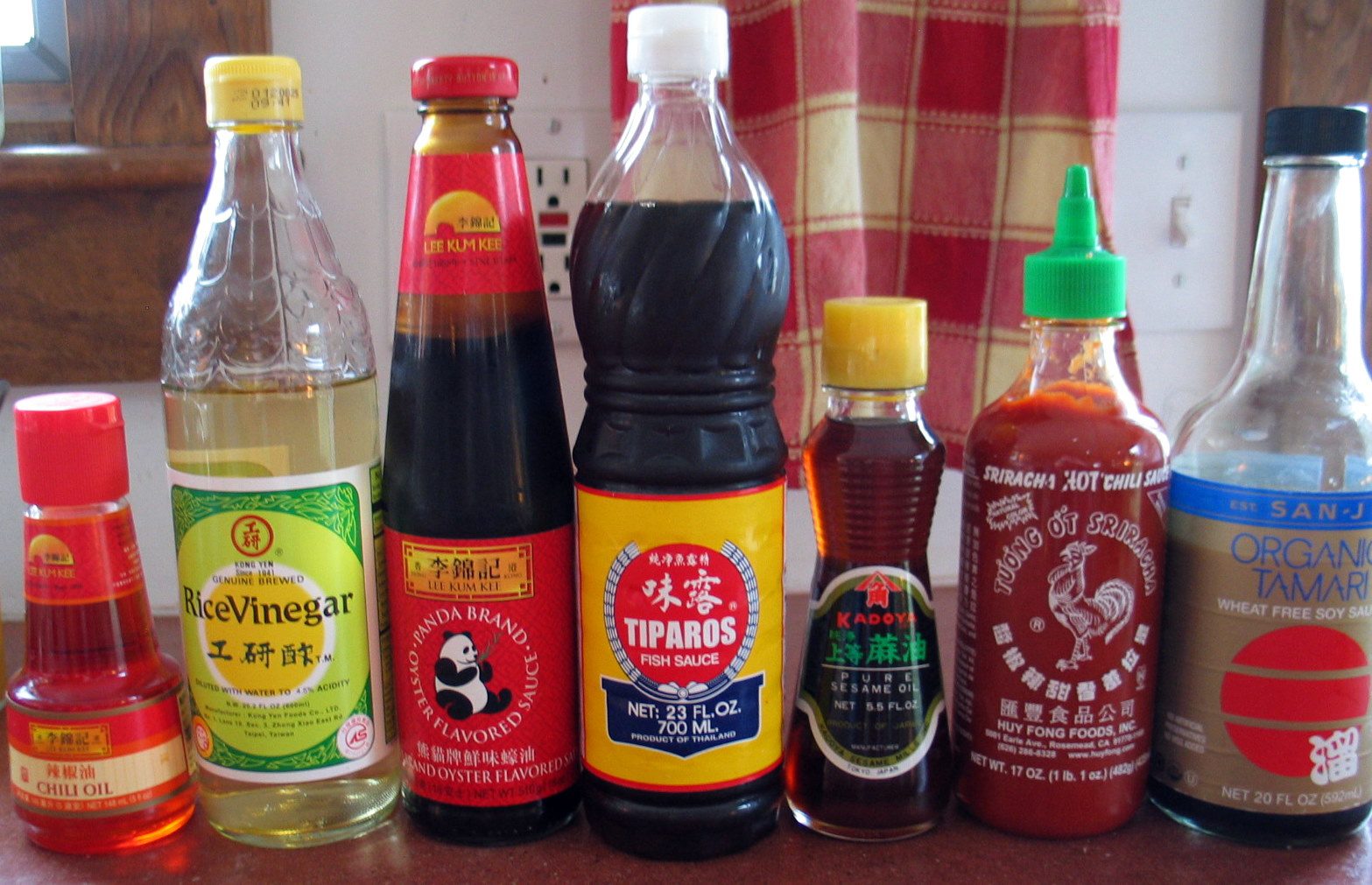 Over the years I have amassed a tidy little collection of liquors. To some people it would seem like a crazy huge extravagance, but to others it would appear laughably small. To me (and I’m who matters here, right?) it is pretty close to just right. I have brandy, rum, whiskey, Creme de Menthe, cognac, vodka, Baileys Irish Cream, triple sec, and most recently, a bottle of Kahlua. It’s enough (though I am wishing after Grand Marnier and Kirsch).

(And for those of you who now think I’m a true-blue slushy, I’m not. I’ve never even been drunk in my whole live-long life and most of those bottles have been there for years and years and years. So there.)

I’ve taken to amassing another sort of bottles lately, those of the Asian variety.

I know nothing of Asian cooking. I’ve never traveled to Asia, and I speak no Asian languages. The closest I’ve been to relating to Asians (not counting a few friends and family members who are part Asian but who are completely at home in our culture) was when we hosted a fifteen year-old girl from Indonesia for a summer. She was a sweet girl but lacking in her z’s—zip and pizzaz. She had one serious downfall: she didn’t know how to cook Indonesian food (the consequence of housemaids and education-driven parents), so I didn’t get any good cooking lessons out of her. I was sorely disappointed.

(I did teach lots of Asians when I was an instructor in the local Mennonite university’s English as a Second Language program. It was the year I got married to Mr. Handsome, and I was outrageously in love and I guess my giddiness eeked out around my professional [HA!] edges because during the final program the students did a spoof of the teachers and they had me talking constantly about Mr. Handsome. I laughed till I about peed my pants, and from then on made it a point to censor my chatterbox. I’ve only been mildly successful.)

Even though I have no handle on Asian food, I still like it. It’s totally different from our normal fare, and considering that my cabinets are filled with sacks of oats, boxes of chocolate, and ketchup and mayonnaise, I knew if I was going to cook anything Asian, I would need to make a few purchases. So I did. So far I have fish sauce, Tamari soy sauce, Sriracha, Chinese five-spice, oyster sauce, rice vinegar, sesame oil, chili oil, and coconut milk. I have fresh ginger and a big old bag of cilantro in the fridge. (I also have matzo meal, chickpea flour, tahini, and dried chickpeas for a Jewish kick I was planning on embarking upon but haven’t gotten around to executing yet.) 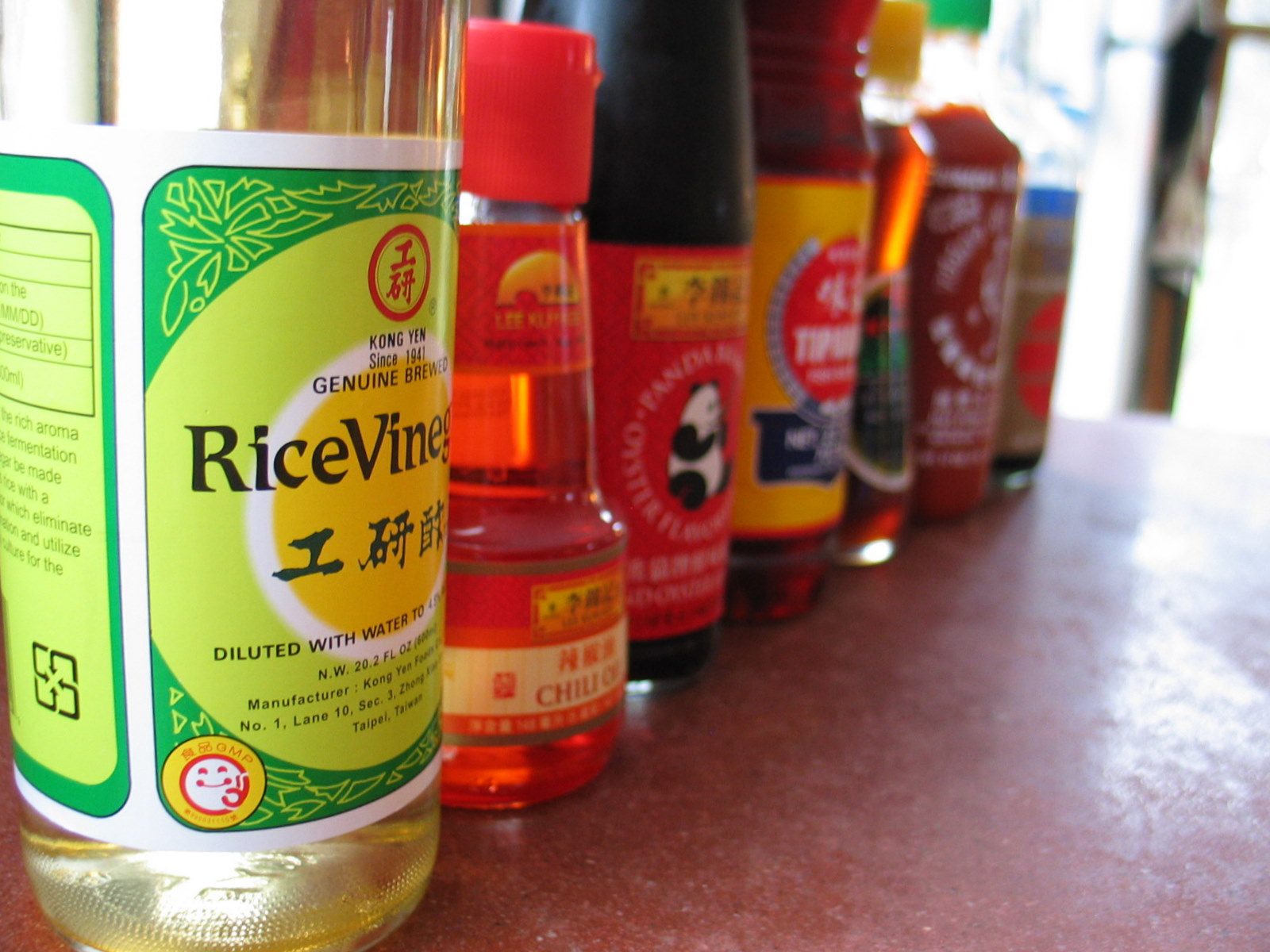 I collect all these goodies from our local Oriental Food Market. When I go there I always end up taking longer than necessary (I do that with most grocery stores, though), creeping through the isles, peering at all the strange labels (half of which I can’t even read), and imagining the exotic dishes that they’re used to create. It gets my creative juices flowing. 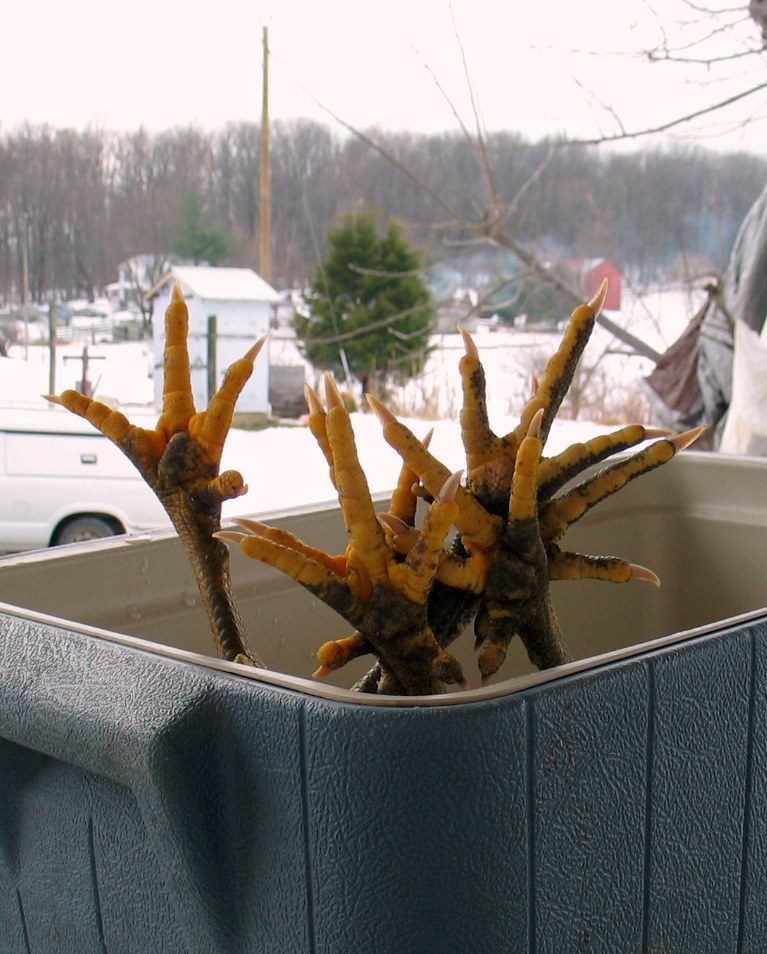 Two of my favorite spots in the store are the freezer section with its huge heads of cabbage, bags of sprouts, oysters, and chicken feet (not that I’m planning on buying chicken feet any time soon—we had our chance to harvest a beautiful bouquet of feet but I chose to pass them up—I can always buy them, cleaned and neatly packaged in plastic wrap, if I so desire—which I don’t) and the fresh produce isle. This past time there were bags of fresh tamarindo, which looked exactly like the brown brittle pods that littered the dirt road in our Nicaragua community. I was never crazy about the fruit when we lived there—I didn’t know how exactly to use it and couldn’t google it to find out—but I squealed with delight when I saw it here in the states, more over the collision of my two worlds than over any real desire to actually eat the fruit.

I’m fully aware that my slew of new jars will take me eons to use up, considering that I only use them sporadically, but they keep forever, so I don’t regret my purchases at all. Why? Because these bottles have helped me to create the most fabulous peanuty noodle dish I have ever made. 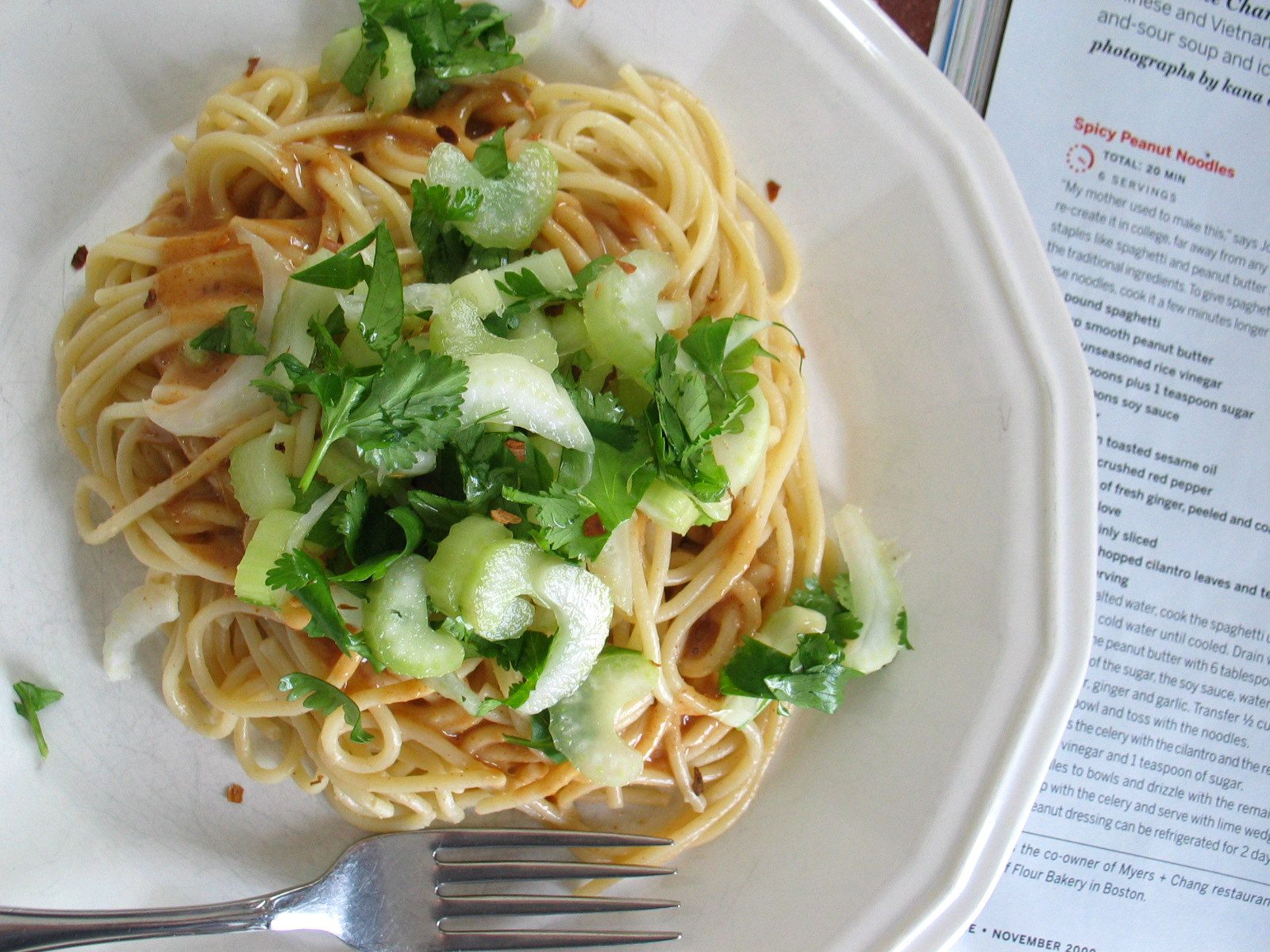 Granted, I haven’t made many peanuty noodle recipes, but I have tried several and that has to count for something. In each of the previous recipes I could sense potential but I just didn’t have the know-how to harness it. Now I know. I have harnessed it. I’m happy about that.

One of the bonuses about this pasta is that it’s good warm or cold, making it perfect for packed lunches. Remember when I asked Mr. Handsome if he liked his lunch and he gave me a quick yes answer to get me off his back? Well, when he got home from work that day, I asked him again what he thought of his lunch, and he said, with heartfelt umph, “It was delicious!” 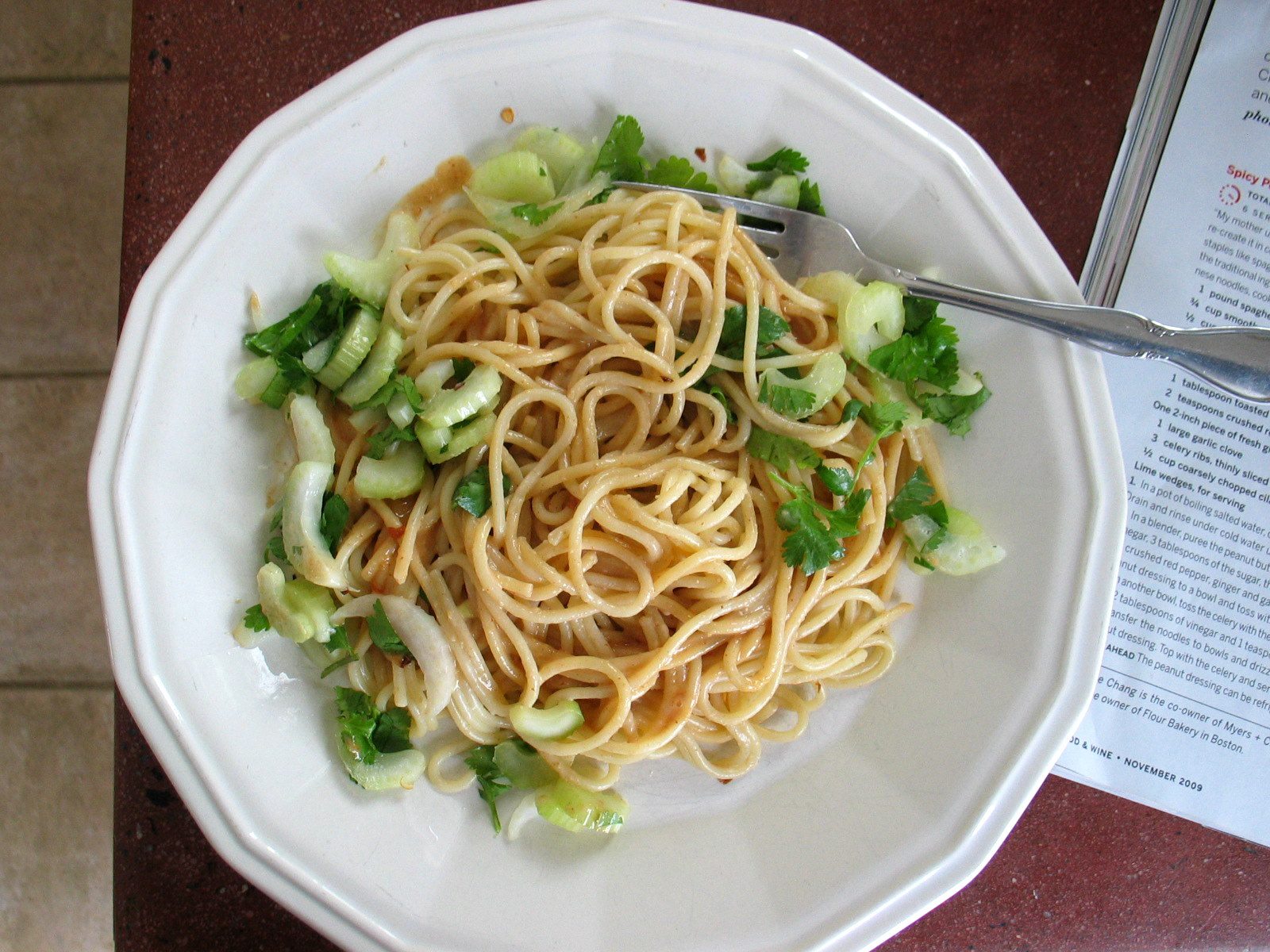 “Yes, it is, isn’t it!” I replied, happily, firmly, á la Julia Child. (You know the scene—when Paul walks into their little kitchen and dips his fingers into one of the many bowls cluttering the table and Julia says, It’s good? and he says Yum, and she says, all confident and self-satisfied, Yes, it IS good, isn’t it.)

(I apologize if all the Julia Child references are getting to you. That movie—and the subsequent food—really made an impression. Be patient with me, please.) 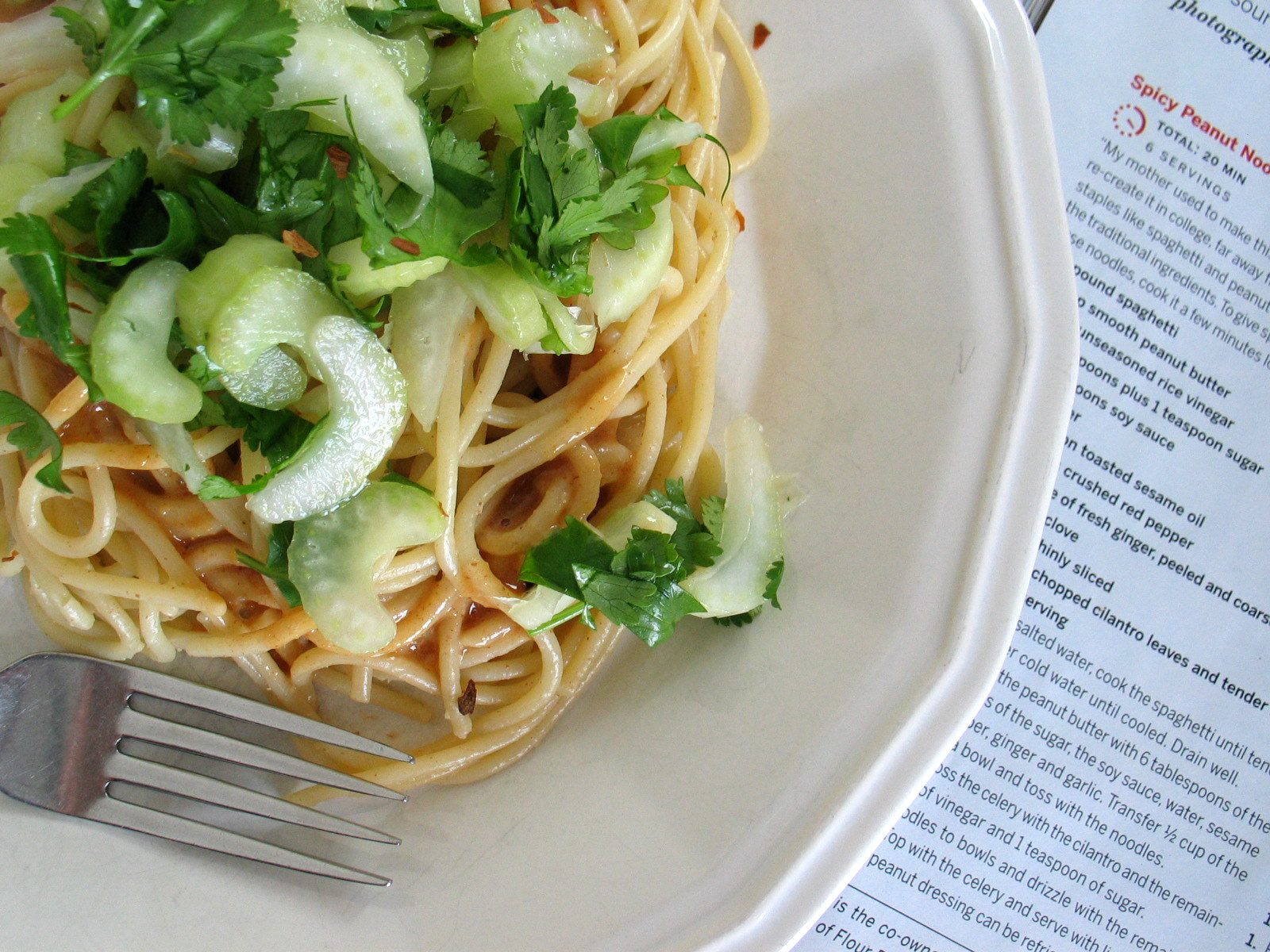 The original recipe called for two teaspoons red pepper, but I dialed it way back to about a half teaspoon in deference to the children. I love heat though, and the kids weren’t crazy for the dish (a couple of them did claim to love it after several hours of playing on an empty stomach), so next time I might make it my way. Ooo, my lips are tingling already!

The next time I make this, I think that instead of reserving most of the sauce to add at the last minute, I’ll toss it all together the first time around—it seemed like an extra unnecessary step (though I could be wrong about that—I guess I’ll find out). I’ll still hold the celery back, though, adding it immediately before serving. (Updated on June 21, 2010: no, it’s better, if anything, to keep the cooked noodles in the fridge, undressed, and then heat them up in the microwave before spooning the peanut sauce on over top. I’ve been keeping a jar of peanut sauce in the fridge, cooking up pasta for whenever the craving hits…which is quite often.)

Cook the spaghetti according to package directions. Drain and set aside.

In a small bowl, combine the celery, fresh cilantro, 2 tablespoons of the rice vinegar, and 1 teaspoon sugar. Stir well and set aside. (It can be refrigerated for a day or two, though it will lose a bit of its crispness.)

In a blender, whiz together the peanut butter, 6 tablespoons of rice vinegar, 3 tablespoons of sugar, the soy sauce, water, sesame oil, red pepper, ginger, and garlic. Add a half cup of the dressing to the noodles (run a fork through the sauce to make sure that there are no chunks of ginger) and toss to coat. Serve the noodles with the extra sauce and top with the celery. Don’t forget the lime (like I did).

Update, January 28, 2010: I made this again, but with 1 teaspoon of hot pepper flakes. It was the perfect heat for me, but Mr. Handsome said it was a bit too hot for him, so I’ll stick with 1/2 teaspoon from now on and just sprinkle extra pepper over my food. (Silly me forgot the lime the second time, too. I’m hopeless.)

About one year ago: On not wanting, the origins of the current bet.