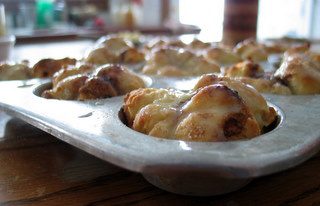 Over the past couple weeks each of my kids has taken their turn visiting my parents for several days at a time, and this past Monday when my mother returned the last child, she stayed for a day and a night so she could do some rugging. When she left yesterday afternoon, I gave her a little assortment of goodies for her to take home to share with my father. Later that evening I received the following email:

JJ– The monkey bread was exquisite. I believe I find it preferable to sweet rolls. The fruity chocolate candies were also wonderful. What chocolate do you use? The raisin-filled cookies will wait for tomorrow. If we don’t have school (not likely) I’ll sit and eat mine in the morning with coffee. JJ and John, Thanks for letting your children visit us. They are delightful. –Love, Dad

Well, shiver me timbers, if that didn’t make me feel all warm and snuggy inside I don’t know what will. For some strange reason, people who appreciate my cooking strike me as being above-average. You know, more intelligent and debonaire. Obviously, they know a good thing when they see it, and they’re confident enough to say so. It’s refreshing.

I’m pretty sure I’m not biased or anything.

After further thought, I suppose it could be that complimentary folks are kindred spirits because they view their food the same way I do—i.e. we like the same things. 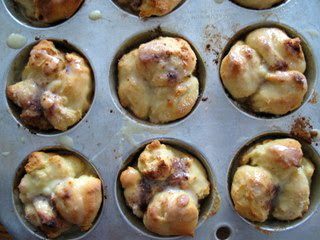 Or maybe they’re just crafty; they know that if they play their cards right, they’ll never have to do any baking ever again.

Hmmmm. Now that’s a very real possibility because giving me a compliment is like opening the floodgates: once I know that a particular person appreciates the fruits of my labors, I direct all my extra culinary creations in their general direction. THUNK—Take that bread! PHWAP—Eat cranberry sauce, three different kinds while you’re at it! SHAZAAM—Chocolates, cookies, cake coming your way, Sugar Pie! With that in mind I think it would be wise to only dish out honest compliments; otherwise you might drown under a deluge of food that you said you liked but didn’t really. And that might make you feel kind of sick.

Not that my father would do something like that. He is sincere and intelligent, of that I am certain. He doesn’t monkey around when it comes to compliments. 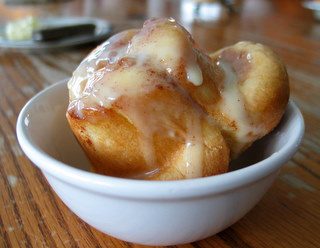 Ree’s Monkey Bread
Adapted from her blog The Pioneer Woman

Ree says you can use any leftover bread dough you happen to have loafing around your refrigerator (ooo, I crack myself up!), but I made a batch of sweet dough specifically for the purpose of turning it into monkey bread. I’ll include the recipe, but do what suits you. The recipe for monkey bread is more of a process anyway, one you can monkey with.

(After all those bad puns, I’m beginning to wonder where the title “Monkey Bread” originated from. Because you’re playing around with the dough? Because you’re pulling the bread apart with you fingers? I grew up with something similar—balls of dough that were rolled first in melted butter and then in cinnamon-sugar before being piled on top of each other in a greased tube pan—but we called it “Pluck-its” because you pluck off the pieces one-by-one. Clarity, anyone?)

One other thought: I bet this would be really good with dulce de leche in place of the condensed milk.

Grease the muffin tins. Put a pat of butter in the bottom of each tin. Add ½ teaspoon (or so) of sugar and a generous dash of cinnamon.

Pull off ragged little chunks of dough and, without even bothering to roll them into nice little balls, plop three of four of them in each muffin tin. (It’s important to not put too much dough in the tins—like I did in that last picture—because you need to have room to add the condensed milk after the bread has baked and gotten all poofy, so err on the side of too little dough.)

Top each cluster of dough balls with another pat of butter, sprinkling of sugar, and dash of cinnamon. Let the dough rise for 30-45 minutes, or bake them right away. Either method works fine.

Bake the muffins at 350 degrees for about fifteen minutes. Upon taking the pans out of the oven, scoop a generous spoonful (a tablespoon, maybe?) of the condensed milk on top of each muffin. Let the muffins cool in their cups for about ten minutes before scooping them out and scarfing them down.

I am not sure how well the baked monkey bread keeps. I’m assuming that after 6-12 hours it needs to be refrigerated because of the milky coating, but I’m no authority on this matter. I recommend only making enough for immediate consumption and sharing and saving the rest of the dough for another baking. Goodness knows it’s easy enough.

Put the warm water in a small bowl. Stir in the yeast and set the bowl aside for ten minutes, or until the yeast has puffed.

Scald the milk. Remove the saucepan from the heat and add the butter. Let the butter melt.
In a large mixing bowl, stir together the milk-butter mixture and the sugar and salt. Add a couple cups of flour and the nutmeg and stir till combined. Stick your finger in the dough to make sure it is no longer hot and then add the yeast, a couple more cups of flour, and the eggs. Stir well. Add the remaining flour.

Knead the dough till it’s supple and elastic (don’t add too much flour or the resulting bread will be tough) and set it to rise in a floured (or greased) bowl.

When the dough has doubled in size, it is ready to be turned into monkey bread, sweet rolls, sticky buns, regular loaves of bread, dinner rolls, or anything else your little heart desires. Or you can punch it down, put it in a large (it will rise), tightly-lidded container and store in the refrigerator till you are ready to shape and bake.

I am submitting this post to YeastSpottings. Lots of other wonderful recipes can be found there, so go check it out.

About One Year Ago: Cashew Brittle. You really need to make this.