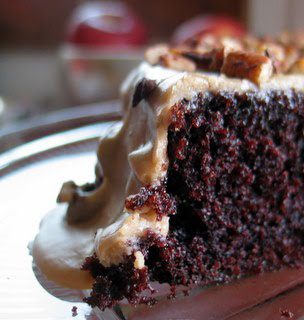 If you haven’t already figured it out, Mom fed us well when we visited her and Dad this passed week. The menu was vegetarian (because that’s what Shannon is), except for the bacon, but Mom is a whiz with garden produce and they eat many of their meals without meat anyway. Along with the aforementioned kale and turnips and eggs and toast and broccoli soup, there was beans and rice, oven fries, green beans (with sauteed mushrooms for the sophisticated among us), butternut squash, and salad with olives and feta.

And there were desserts, too, of course. Butternut squash pies with whipped cream, lemon meringue pie, pumpkin cheesecake bars that Shannon brought, and chocolate cake with brown sugar icing of which I was particularly fond, so fond, in fact, that when I got home I made a chocolate cake just so I would have a place to put some brown sugar icing.

I served Mr. Handsome a piece of the cake without telling him what kind of icing it was. After a couple bites, he said, “It’s butterscotch icing, right?” I was slightly stunned. I didn’t even think of it as butterscotch, but he couldn’t be more right. Man, he’s good! 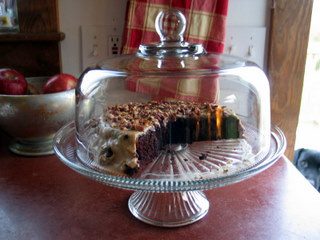 And so is this icing.

This a cross between a glaze and a frosting. Don’t try to spread it with a knife; instead, pour it on top of the cake and then gently push it to the edges so that it runs down the sides and puddles on the platter.

This recipe makes enough icing to frost a sheet cake. I only needed enough to ice a one-layer chocolate cake, so I’m storing the rest in the fridge for now. I imagine it should reheat just fine in the microwave.

In a heavy bottomed saucepan, melt the stick of butter. Add the cup of brown sugar and the pinch of salt. Stirring steadily, bring the mixture to a gentle boil. Reduce the heat a bit, and cook the slowly bubbling mixture, still stirring, for a full minute. Remove the saucepan from the heat and add the milk.

Set the pan in a larger bowl of ice cubes. Stir every several minutes until the mixture has cooled down a bit (it will still be warm, though) and thickened. Take the saucepan out of the bowl of ice cubes and stir in the vanilla and confectioner’s sugar.

Frost the cake and sprinkle with the pecans and chunky salt.

About One Year Ago: No Zip, or election withdrawal. (That big election was just a year ago. Remember the gut-wrenching anxiety?)