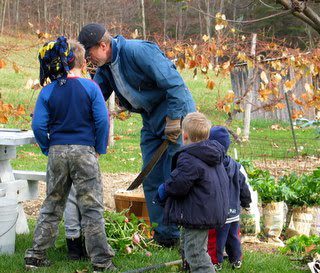 On Monday morning I called my friend (and fellow homeschooler) Shannon. “How about we go to West Virginia this week?”

A couple weeks earlier I had suggested to her that we take our combined seven children and flee to my parents’ house in WV for a couple days. The kids could still do their schoolwork, made all the more fun (or at least more endurable) by being with their friends and in a new setting, and then they could spend endless hours playing in the great outdoors. As for Shannon and me, we could go for walks, eat my mom’s good cooking, and sit around on our fannies eating chocolates and talking a blue streak. But, alas, Shannon said she couldn’t go—she had doctor’s appointments and such.

But then she called me back. “I could maybe change the appointments,” she said.

And so Tuesday afternoon found me driving West Virginia’s back roads with Shannon’s maroon van trundling along behind, doing its best to keep up as I whipped over the hills and around the curves.

The following day the kids did their school work as planned, but, truth be told, it was pittance compared to the other learning that went on.

Lesson Number One: Machetes are sharp.

My father showed the boys how to chop the greens off the turnips. He said each boy could de-top three turnips before giving the next boy a turn. Yo-Yo wanted to be first. 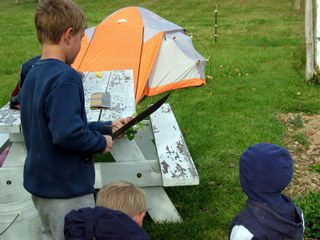 He chop-chop-chopped and then dropped the machete and fled to the house with nary a whimper, clutching his hacked finger with his other hand. It was just a nick, but the lesson was duly noted.

Lesson Number Two: Conflict resolution can be simple.
The boys argued. Tears threatened. They split up, not wanting to even look at each other. After a decent amount of cool-down time, Yo-Yo still refused to come out to the kitchen. I said, “Just tell him you’re sorry you were mean to him and then you can get on with doing the fun stuff.” A couple minutes later Yo-Yo yelled for Justus. Justus obligingly went. Yo-Yo said gruffly, “I’m sorry I yelled at you.” And then, without pausing for breath and in the same tough voice, “You wannna listen to this song?” And just like that, they were buddies again.

Lesson Number Three: Steers ought to be in the circus.
My father trains his steer. He holds the can of feed above the beast’s head and says “turn,” and the steer turns, once, twice, thrice, four-ice, and then my father says, “Okay, that oughta be enough,” and dumps the grain in the feeding trough. Hillbilly entertainment, for sure. 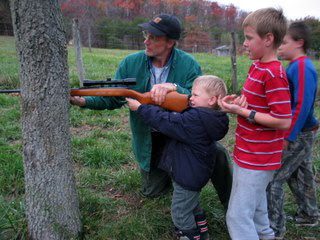 Even the Baby Nickel took his turn at trying to hit the tin cans my dad hung on a brush pile up by the edge of the woods.

Lesson Number Five: Mountain folk periodically lose their hot water.
My father stayed home from school to do stuff around the house and garden (and to supervise the machete-happy boys and other frolicking kids) and it was a good thing he did because mid-afternoon he went down to the crawl cellar/basement to fetch himself an apple and noticed that the hot water heater was leaking. 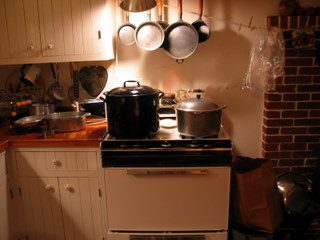 So we had to heat up our dish and bath water on the stove. Now I totally understand how Ma Ingalls felt. 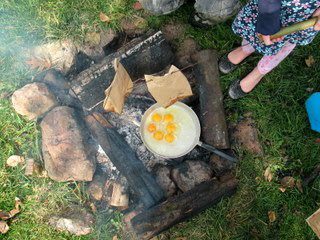 To make a brown bag breakfast:
*Place two strips (or half strips) of bacon on the bottom of a brown paper lunch bag, fold over the top, and poke two holes through the top of the bag and weave a stick through the holes. 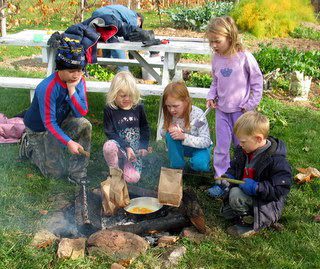 *Hold the bag over the fire for an agonizingly long time, till the bacon is mostly done.

*Add two eggs to the bag and return the bag to the fire.

*The breakfast is done when the eggs are cooked, or when the bag catches fire. 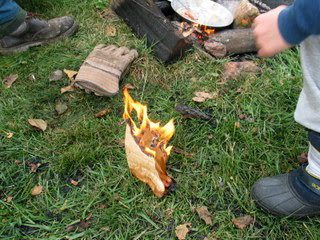 *In the case of the flaming bag scenario, drop the bag on the grass, don a heavy pair of work gloves, and clap out the flame. 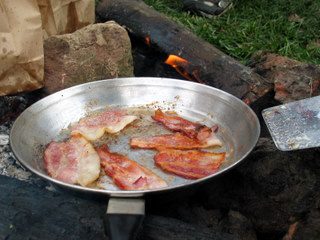 *Then proceed to cook your eggs and bacon in a skillet, which is probably what you should have done in the first place.

Lesson Number Seven: Cooked turnips are good.
Dad harvested his turnips and at lunch time we ate them raw with salt. For supper, one of the boys peeled a few turnips and then mom boiled them till tender (and burned, but that part wasn’t intentional or serious enough to be a deterrent) and drizzled browned butter over them. I ate mine with piles of the boiled and buttered kale. I’m still fantasizing about that dish.

Lesson Number Eight: The stomach digests protein but not vegetables.
Over a lunch of broccoli soup, pesto torte, and crackers, my father regaled us with the true tale of a man who got shot in the stomach. The wound healed but the hole never closed over, so the man’s doctor used him (respectfully, I presume) for scientific experiments. The doctor tied a piece of string to bits of meat or beans or fruit and then stuck them in the hole. He pulled them out later to see how they were digested. In this way he learned that the stomach digests proteins but not plants. (And I guess not string.)

Lesson Number Nine: Gnomes live in the basement, or else Grandmommy is certifiably insane.
Because of the water situation, we had the hot water taps turned on all the way to let the air out, so we would occasionally hear gurglings and hissings from the bowels of the house. Justus and my mother were working at the kitchen sink together when she suddenly leaned over so her mouth was at the spigot and yelled, “Gnomes! Gnomes! Will you please stop making all that noise! Just stop it, you hear? Stop it, I said!”

She righted herself, glanced at Justus out of the corner of her eye, and then launched into a story about the gnomes in the basement and—What? You don’t believe in gnomes ‘cause you’ve never seen them? Well, of course! You can’t see them if you don’t believe they’re real—and on and on.

Lesson Number Ten: It’s important to get a college education.
Come bedtime, my mother sat on a footstool in the upstairs hallway and told bedtime stories. 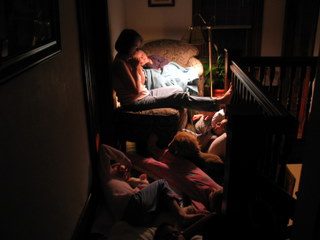 The first was about a boy who was so uncoordinated that he couldn’t even clap his hands together, so his teacher told him that she would take him out for ice cream if he learned how to clap. The poor boy practiced and practiced until finally he could do it—oh, joy!—but when he went to eat his triple-decker ice cream cone, he smashed it into his forehead, still not sufficiently coordinated. 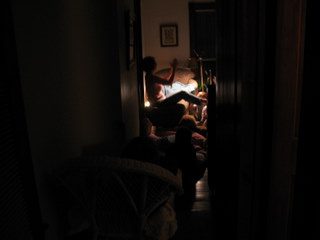 The second story was about the Crooked Mouth Family. Each person in the Crooked Mouth Family has—you already guessed it—a crooked mouth. The father’s lower lip juts out, the mother’s upper lip sticks out, and each of the two children speak out of different corners of their mouths. One night when the family is ready to go upstairs to bed, they run into a problem—none of them can blow out the candle. (Mom was holding a candle, acting out the story as she told it.) After each of them takes their turn puffing, the father calls upstairs to their son John who happens to be visiting at home for a few days, and when John comes downstairs, he quickly and easily blows out the candle. Father says gravely, lower lip protruding, “Son John’s been to college. See what he can do?” 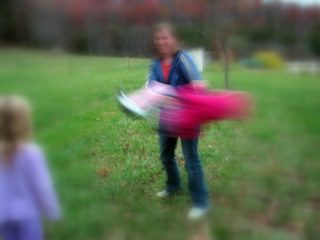 People who aren’t familiar with homeschooling firsthand (meaning, they don’t do it themselves) often feel sorry for us poor mamas, for all the long days spent sitting beside our children listening to them count by two’s and making sure they cross their ‘t’s and dot their ‘i’s. At least, that’s what they think we do.

They really have no idea.

About One Year Ago: Sausage Quiche with Potato Crust.