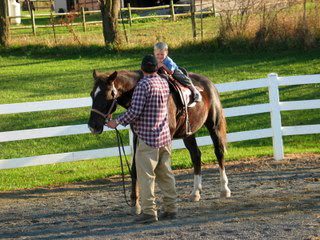 Our neighbor Karen and her husband Gale have a lot of horses, like about ten. Okay, so it’s not as many as Pioneer Woman (I don’t even need to link to her—you all know who she is and that her cookbook is number one on the New York Bestsellers list, right?), but it’s still a lot, especially considering that they don’t have any cattle which would require horses for herding (that sentence does not make much sense, but I trust you’re smart enough to figure it out). And they used to have more like sixteen horses.

Their rented pasture borders our (unused) pasture, and the kids like to chat with the horses over the barbed wire fence. They also pick grass for them and shyly pat their noses.

As for me, I pretty much ignore them, except for when I happen to glance out the kitchen window and catch sight of three or four of the magnificent creatures thundering across the meadow. Then I am forced to pause in my little race from fridge to stove to sink and stare at them as they whirl and kick up their heels. They’re practically in my backyard, and once in a while they get in my backyard and then we close the gate so they don’t hightail it down the road and make the requisite phone calls and watch to make sure they don’t take a fancy to our peach trees.

Last week Karen stopped by with a stack of farm magazines for us to read and/or cut up and with an invitation for the kids to come over and ride horses. I readily accepted, and when I went back into the house and reported our conversation to the kids, you could have heard them hollering the whole way over in China.

That was on Friday; we were scheduled to ride on Sunday afternoon. This was to be the first time that the kids had ever ridden a horse (except for Sweetsie who got to ride a horse at a friend’s birthday party), and they became obsessed: with the weather forecast (Yo-Yo), with how many “sleeps” remained (Sweetsie), and with appropriate riding attire (Miss Beccaboo). The big day finally arrived, and each minute was impatiently endured, and then, suddenly, it was 2:55 and could begin the walk over to the riding ring.

The horses were big, but they became huge when I helped to hoist my three year old up into the saddle.

Apparently, Nickel thought they were huge too, because he immediately slumped over and laid as low as possible. 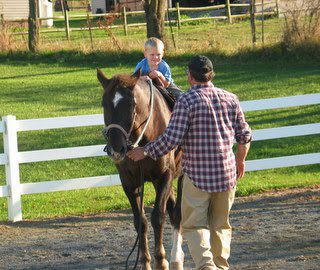 I called to him, urging him to sit up, which he did… 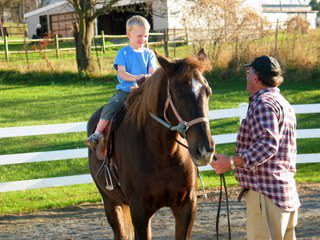 But only for a moment. 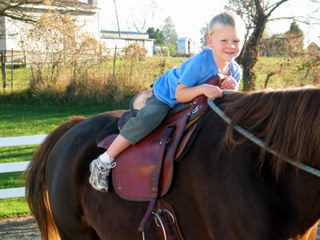 Karen volunteers at a camp for mentally and physically handicapped children where she assists with the equine therapy, and she did some of the same camp activities with my kids—balancing exercises and jousting games (foam swords). 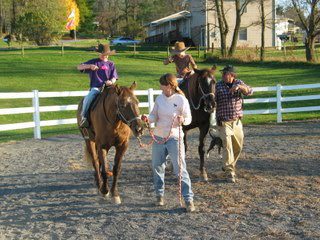 She and Gale taught the older two how to stop and start and turn and back up and then let go of the lead rope and let the kids ride by themselves, though they always walked alongside. 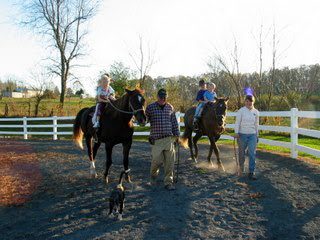 See that halo above Karen’s head? That’s what you get when you give up a couple hours of your gorgeous Sunday afternoon to take four little kids on horse rides.

Mr. Handsome and I hung around the fence, only coming into the riding ring to help the kids mount and dismount or do whatever it was that Karen needed doing. Mostly I just stood there and grinned like a fool, so happy to see my kids riding a horse and loving every minute of it. 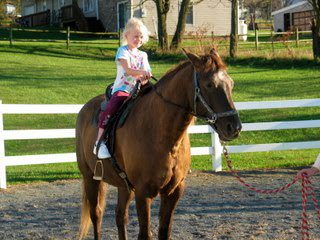 I’m a little scared of horses because I got thrown from one when I was fifteen. My girlfriend Beth and I were riding horses through their fields when the horses spooked and veered, smoothly depositing us on the ground. I hit my head, the lights went out, and when I woke up, Beth was crying and her forearm was all wavy like in a cartoon. We got an ambulance ride (going up and down over West Virginia back roads, laying down backwards and with a concussion is not a particularly pleasant experience). I spent the night in the hospital for observation purposes, but in the end, all that ailed me was a stiff back. And a nervous fear of horses. 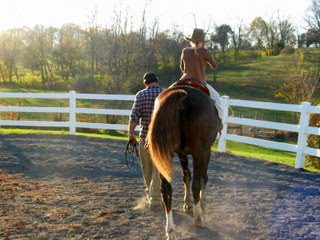 I don’t want my kids to grow up like me, edgy and uptight around horses—it’s just not cool. I doubt they’ll ever be like PW’s kids (it’s not like we live on a ranch and they have the same opportunities), but still, I want them to be knowledgeable about the graceful giants and to feel at home around them. Sunday was a good first step. 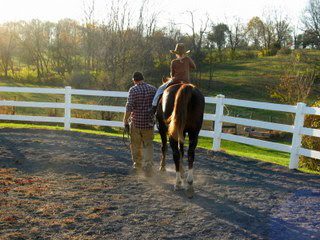 Here’s Mr. Handsome, probably dreaming about getting our upper pasture properly fenced off and a barn built so that we can one day have a horse of our own. 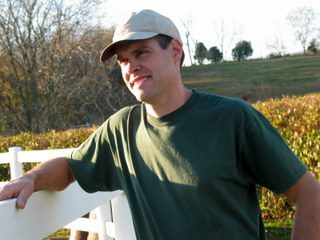 Or maybe he’s dreaming about swinging up into the saddle and galloping off into the sunset in a cloud of dust. 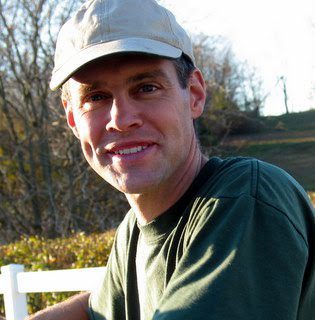 Oops, he’s spied me. And look at that expression; I do believe he feels sheepish! Which means he was dreaming the latter dream. Obviously.

About One Year Ago: Homeschooling angst.