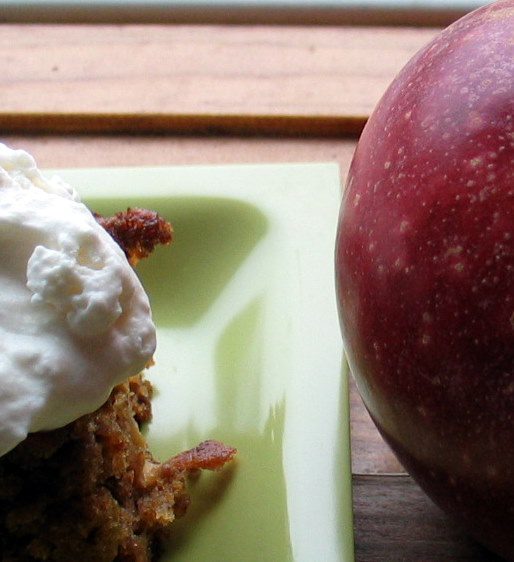 Apple season is here and I’ve been searching for the perfect apple cake. I didn’t want a cake that was vaguely reminiscent of apple—I wanted a cake that was chock-full of the tart chunks of fruit, well-spiced and wholesome.

I looked at a handful of recipes and made a couple flops (of one of the duds, Yo-Yo said, This cake doesn’t have any flavor; it’s just stuff against your tongue), and then I spied a recipe for apple cake in our local paper. The recipe itself didn’t strike me as being a winner, but after studying it for a bit, I realized that it provided the perfect groundwork for some culinary imagination. 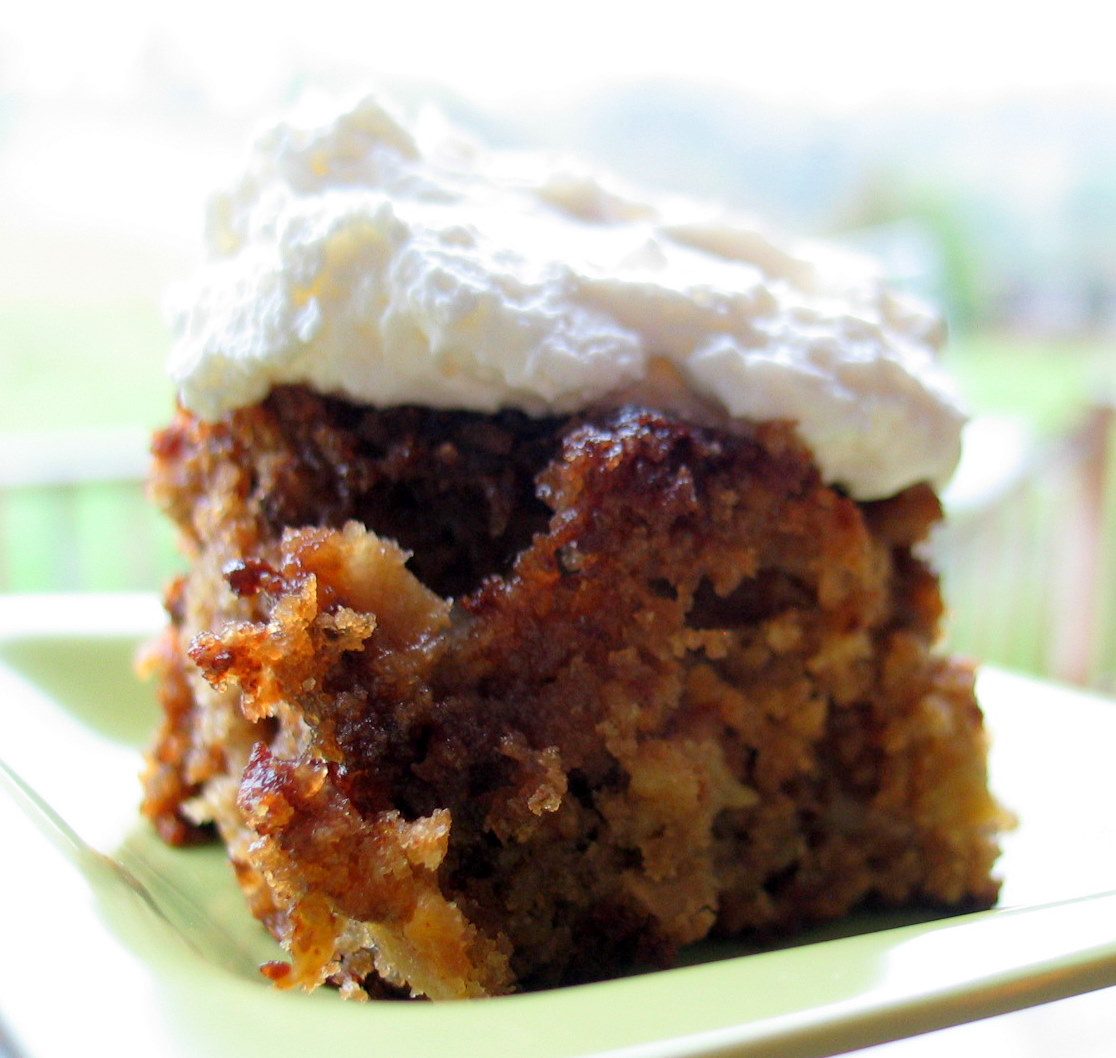 So I commenced to imagining and measuring, tweaking and stirring, hoping and waiting (and washing up the dirty dishes). Just so you can fully appreciate my culinary genius (ha!): I subbed half of the white flour for whole wheat, cut the sugar in half and switched to brown, doubled the apples, dialed back the nutmeg, glugged in some blackstrap, and tossed in the yogurt, ginger, and wheat germ. It was fun.

Then, finally, I tasted. And what do you know? I got what I was looking for!

Moral of the tale? It pays to have an imagination. 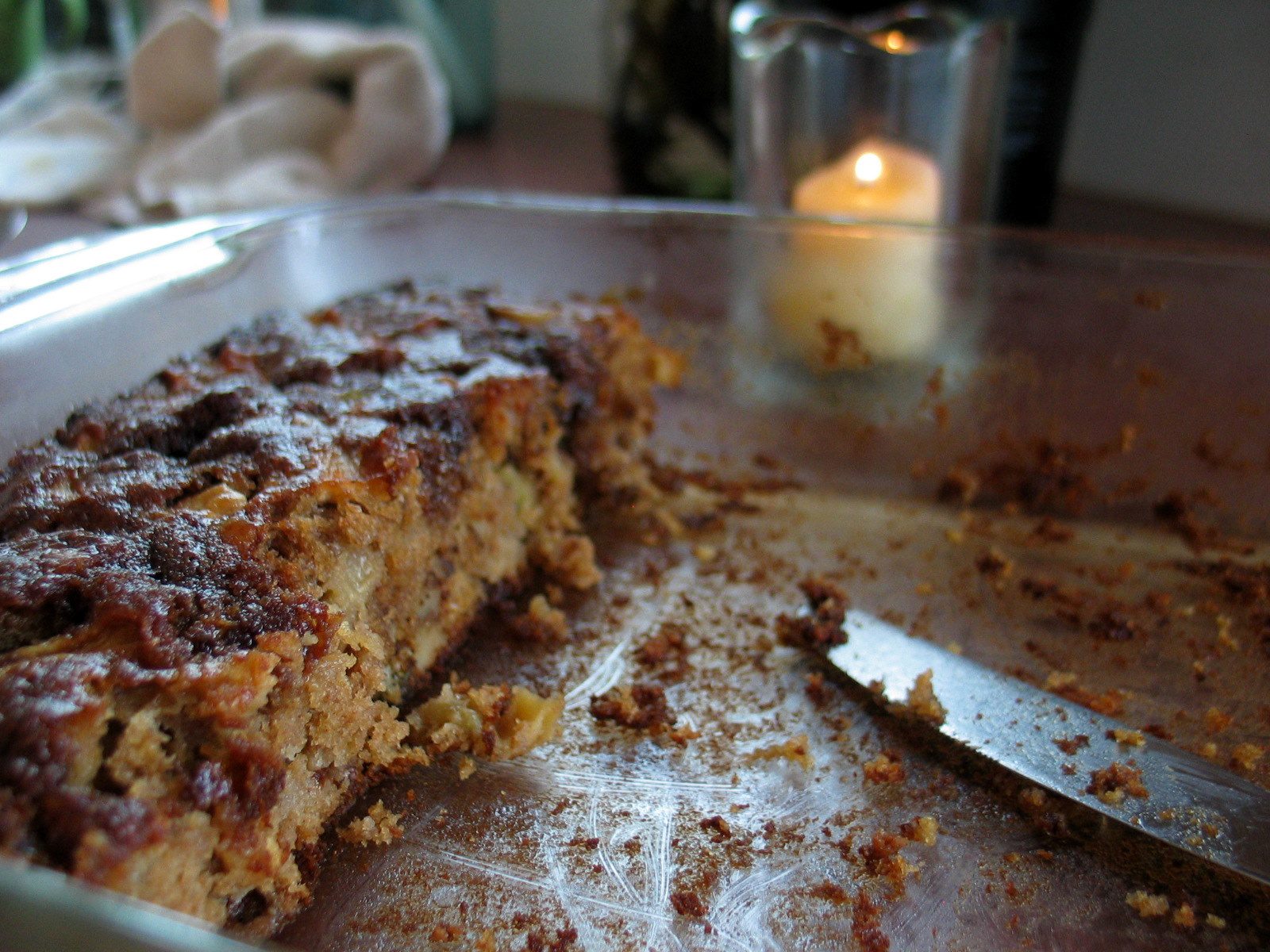 This cake is a humble affair, nubbly, nutty, and nutritious, but a dollop of whipped cream dresses it up just enough to make it presentable for company. I dimpled the top of the cake with a slurry of melted butter and brown sugar, but it wasn’t necessary (though it did add a sweet goo factor) so I didn’t include that part in the instructions.

It’s muffins you’re wanting? Then spoon the batter into muffin tins and sprinkle with a crumb topping of your choosing.

In a large bowl, stir together the first nine ingredients (through the candied ginger). In another bowl stir together the oil, yogurt, eggs, molasses, and vanilla. Add the wets to the dries and mix gently. Add the apples, walnuts, and raisins and stir to incorporate.

Pour the batter into a greased 9 x 13 pan (use a rubber spatula to spread it evenly) and bake the cake at 350 degrees for 30-40 minutes. Cool to room temperature.

Serve with billows of whipped cream.

About One Year Ago: Another fall cake, Pumpkin Cake with Cream Cheese Frosting.