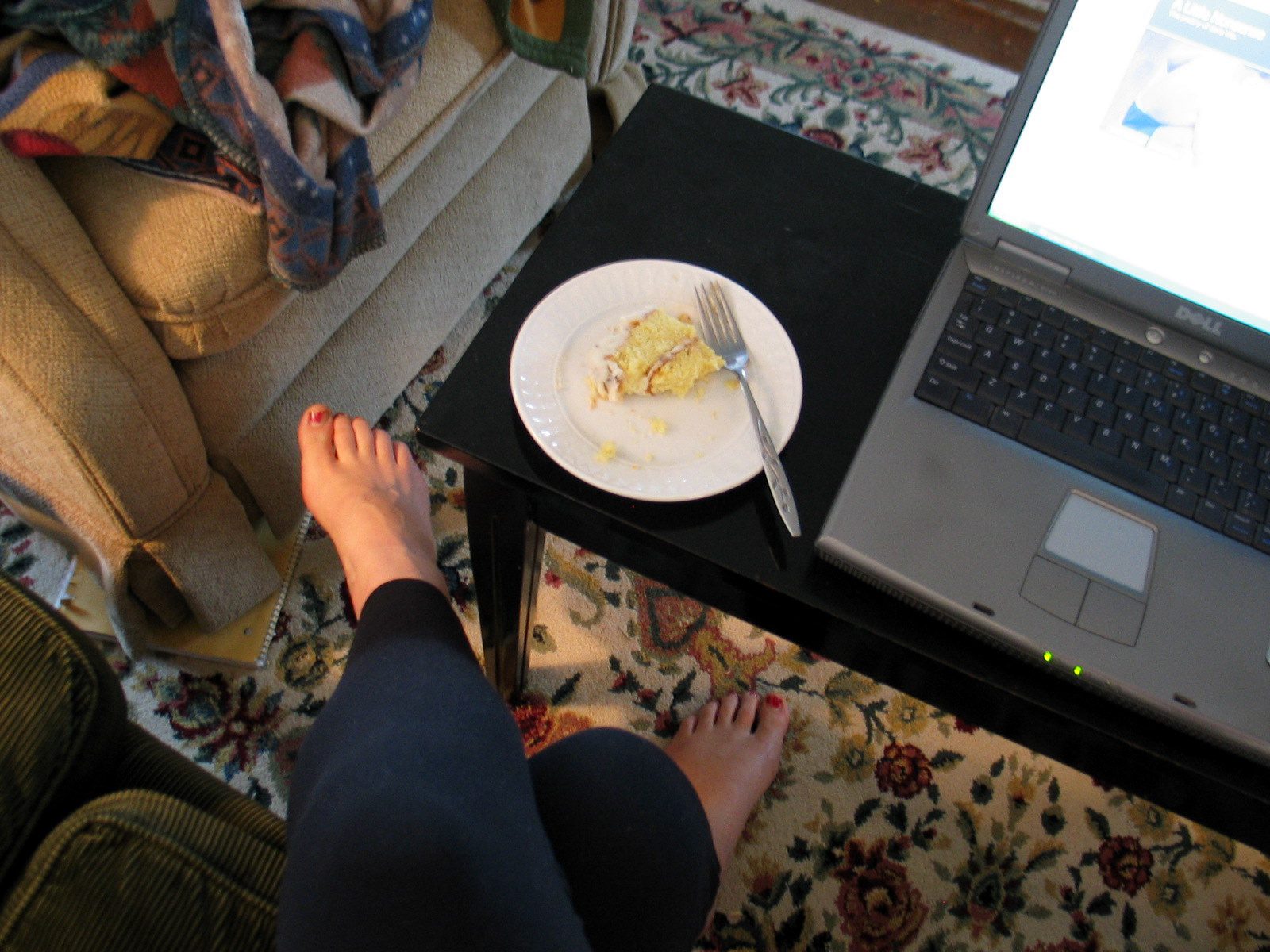 It’s Sunday afternoon, cold and blustery outside, but warm and toasty inside by the fire. Mr. Handsome is upstairs resting with The Baby Nickel, Sweetsie is in her room (sleeping, hopefully), and the three older kids (Yo-Yo has a friend over) are outside doing who-knows-what (I don’t really care as long as they’re quiet and leaving me well enough alone).

I’m feeling pensive and muse-ful and gentle inside. If I could purr, I would. I’m not sure why I’m feeling so calmly pleasant, but I have a couple good guesses: first, I had some good conversations at church this morning and I laughed a lot; second, I’m wearing leggings and a flow-y gray dress that makes me feel like a cross between a hip hippie and a damsel from the Elizabethan period; third, I’m drinking coffee and eating (have eaten, rather) a piece of Italian Cream Cake; fourth, I have a number of creative projects and ideas that are inspiring me rather than overwhelming and frustrating me (though that is susceptible to change at the drop of a hat); fifth, a bottle of homemade elderberry wine, gifted to Mr. Handsome by the owner of the house where he’s been working lately, is sitting on the kitchen counter, calling to me (all hippie damsels drink homemade elderberry wine, right?); sixth, my girlfriend and her kids are coming over tomorrow morning and we’re going to play One Room Schoolhouse which will be fun and productive and will hopefully counteract the Monday morning blues that have been plaguing us these past few weeks; seventh, the house smells like apples because we’re drying them by the bushel. 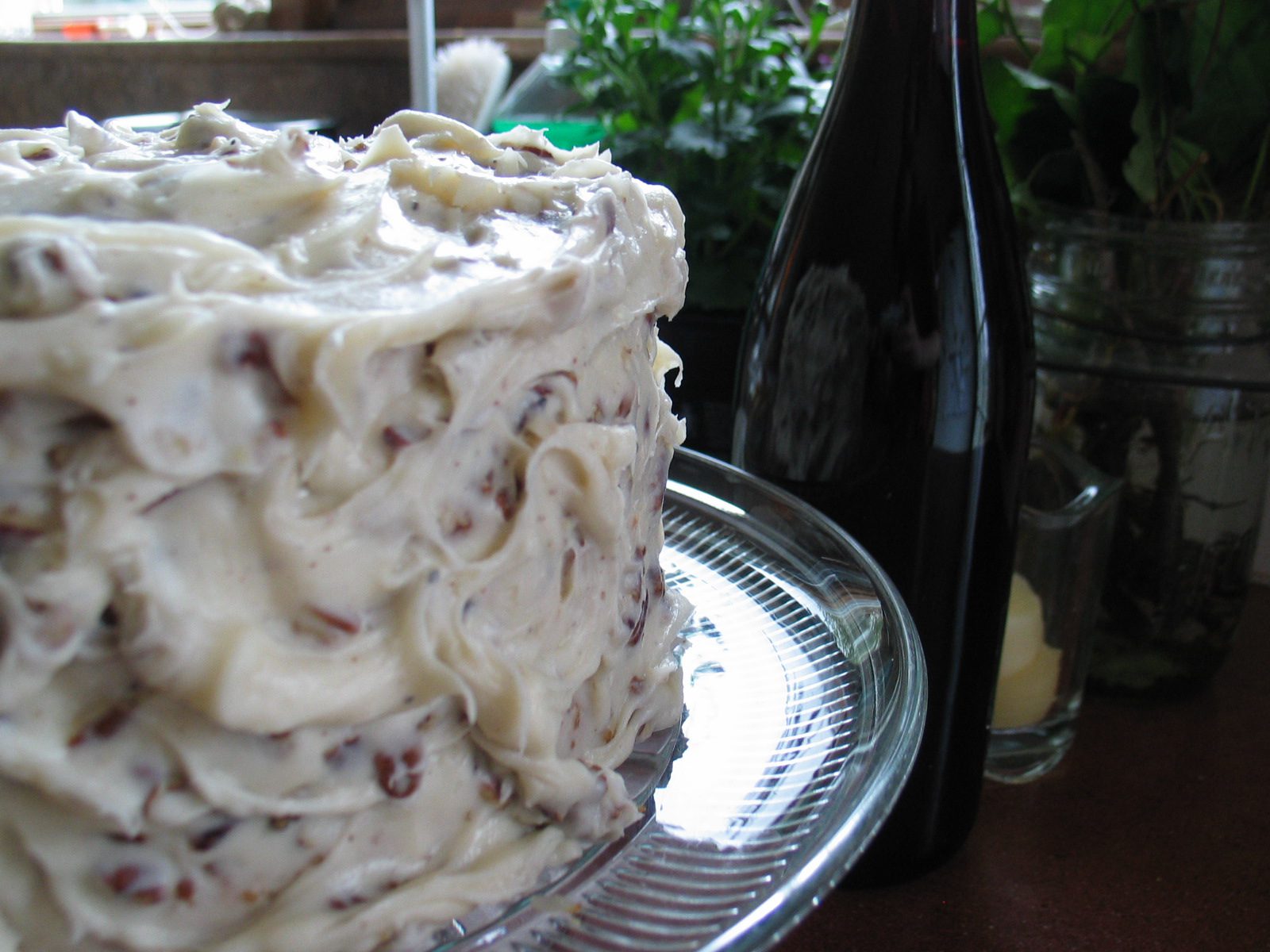 But back to the cake.

We’ve been eating a lot of cake recently, if you haven’t already figured that out. There was the birthday cake that my mother made for me and then two weeks later Mr. Handsome’s birthday cake, a cheesecake. Yo-Yo has requested a chocolate cake with mint icing for his birthday this coming Friday. As if the birthday cakes haven’t been sufficient, I’ve been experimenting with other cakes—apple cake (one was a keeper; two were chicken food) and an Italian Cream Cake, another keeper for sure. That’s a lot of cake. 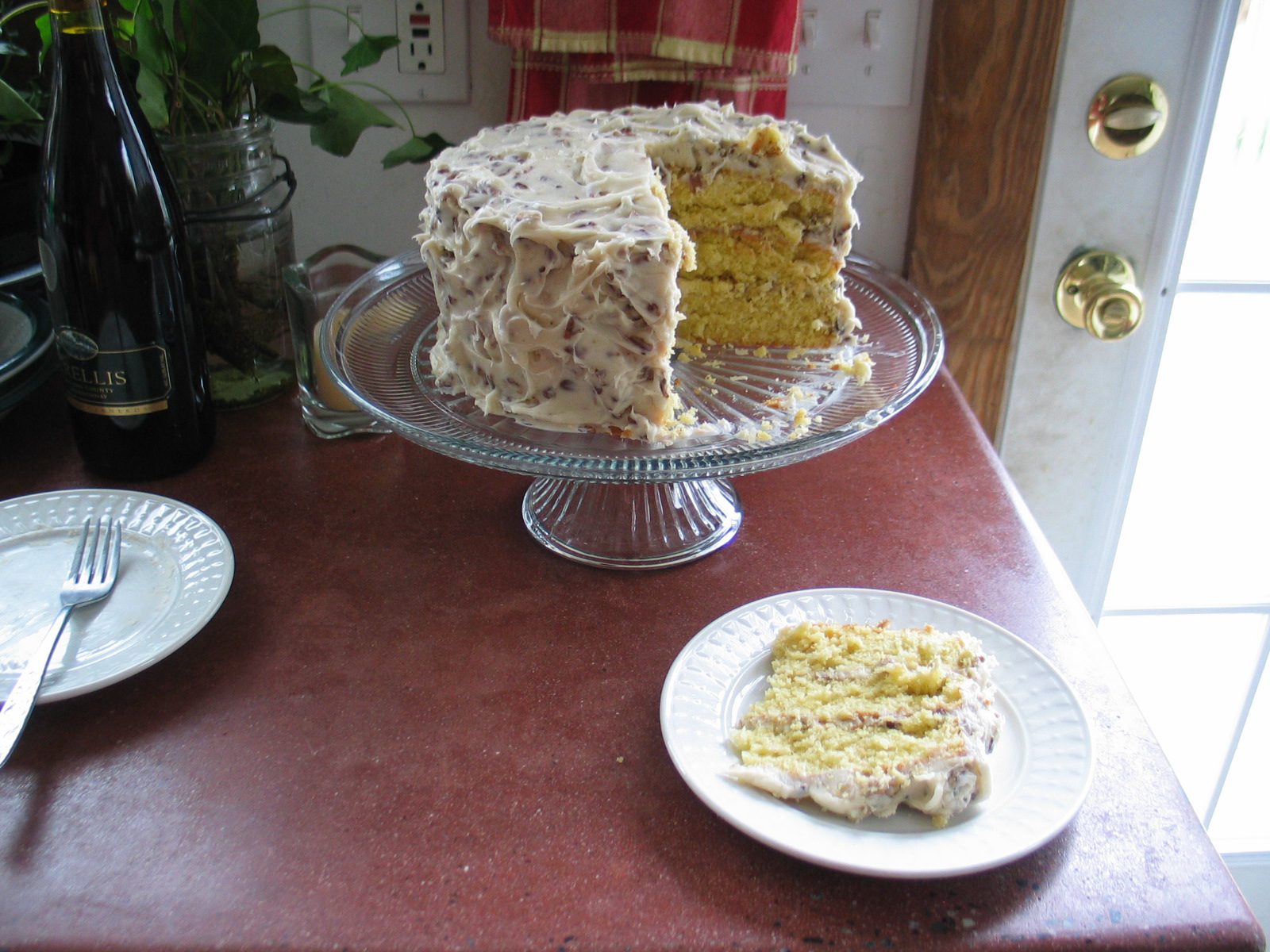 Italian cream cake is coconut cake with cream cheese pecan frosting. It’s delicious fresh, and it’s even better chilled (I’m keeping it in the fridge because of the cream cheese frosting). It has, after only two pieces (and a number of not-so-discreet snitches), positioned itself on the sacred list of My Favorite Cakes, right up there with cheesecake and chocolate cake. That’s saying a lot. 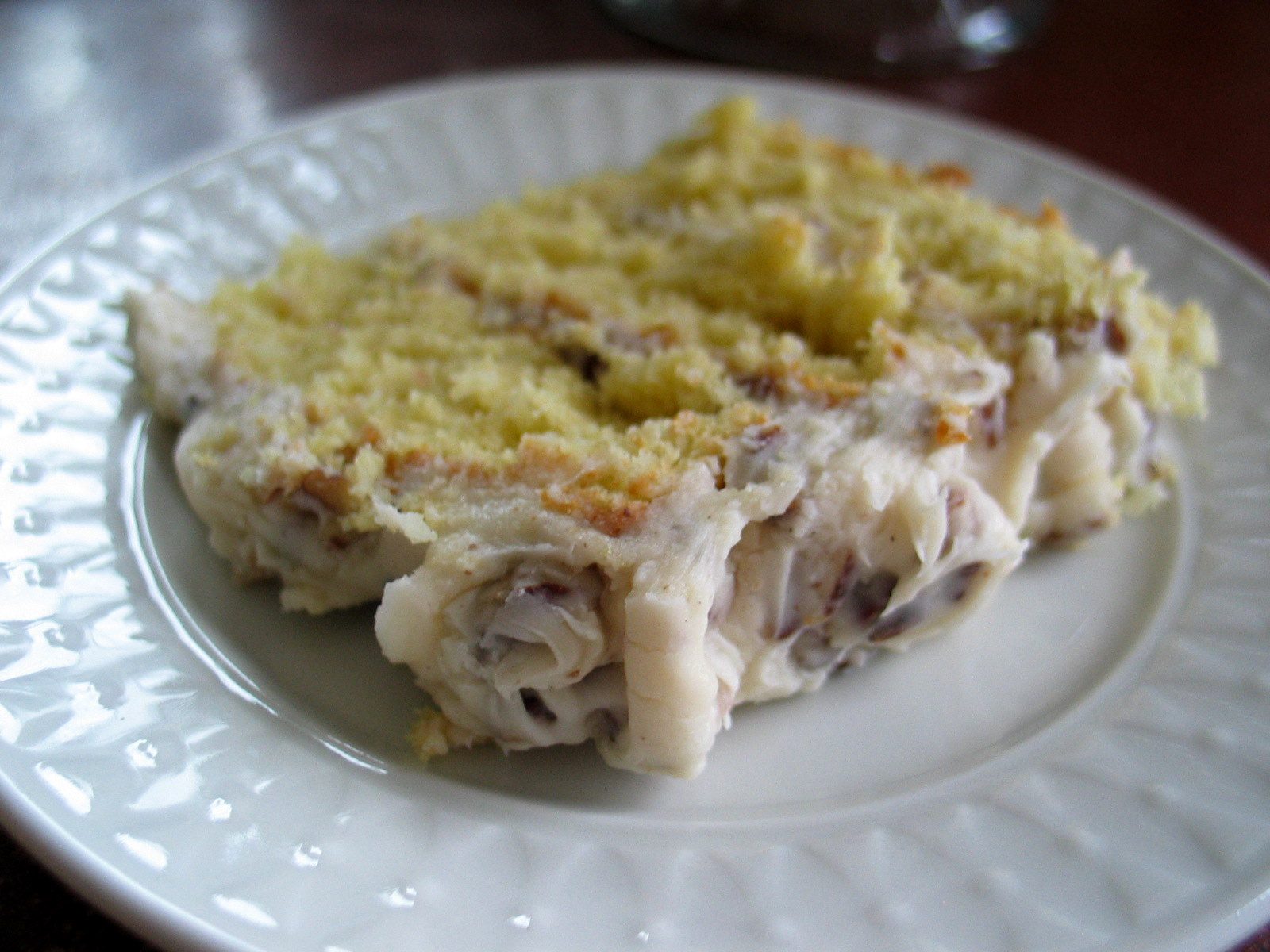 Mr. Handsome (he finished putting The Baby Nickel down) came to sit beside me on the sofa to eat his slice of cake. As he forked the last bite into his mouth he turned to me and said in a puzzled, pleasantly surprised sort of way, “That is really good cake.” It was almost offensive the way he said it, though I know exactly where he’s coming from, seeing as he’s sampled a greater number of chicken cakes than is normal.

Of this cake, though, the chickens will not be getting a crumb.* 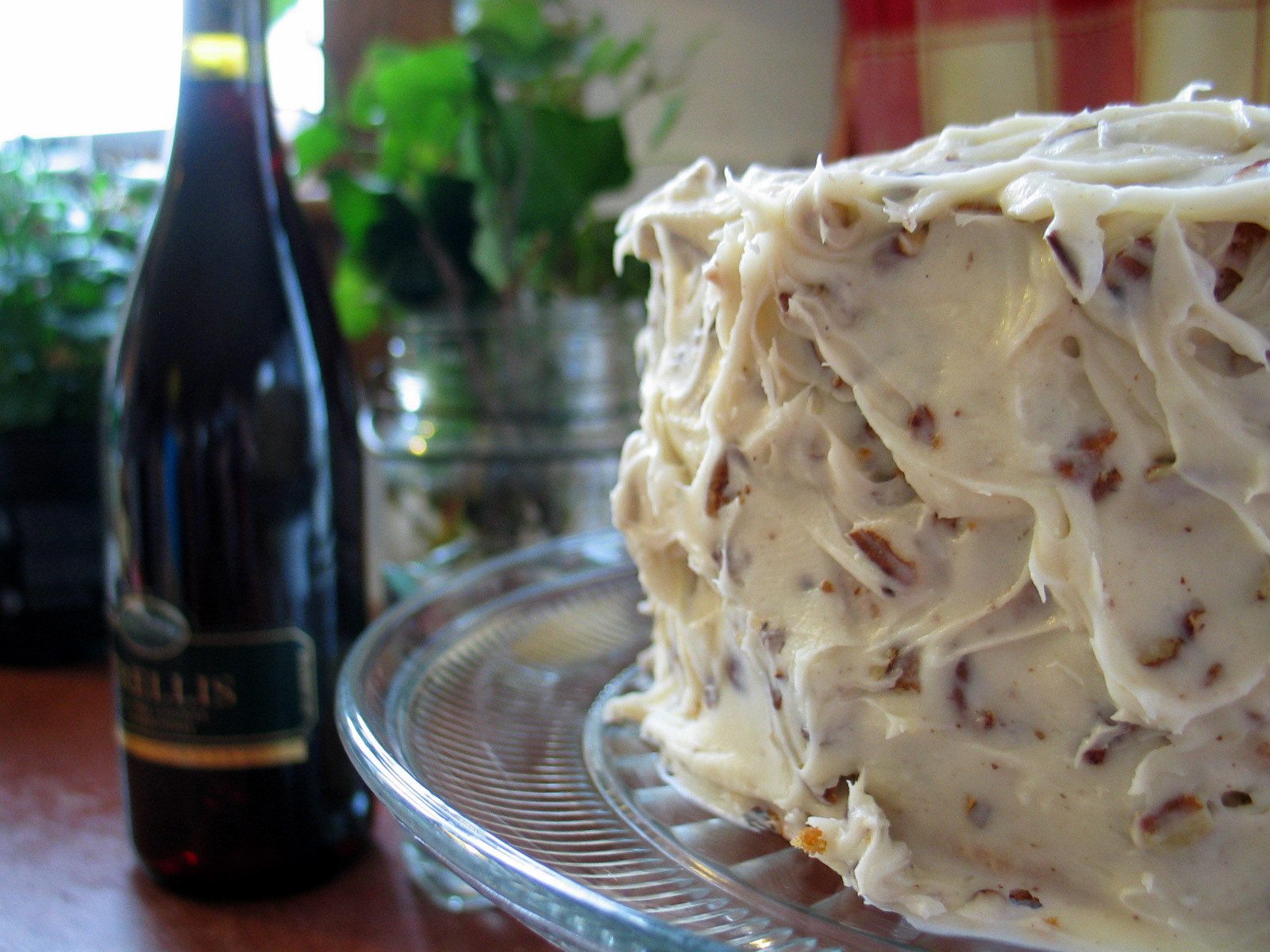 The original recipe called for half butter and half shortening, but I used three-quarters butter and one-quarter shortening (because that was all the shortening I had on hand). I think next time I will use all butter, or I may experiment and sub a little of the butter with coconut oil.

Also, I didn’t have buttermilk, so I put a couple tablespoons of plain yogurt in the bottom of a one-cup measure, topped it off with milk, stirred to combine, and voila, made buttermilk.

In a medium-sized mixing bowl, beat the egg whites until they form stiff peaks. Set aside. (I do this part first so that I don’t have to wash the beaters more than once.)

In a large mixing bowl (and with your egg white-y beaters), cream the butter with the sugar. Add the vanilla and egg yolks and beat some more. Add the dry ingredients (the flour and baking soda) alternately with the buttermilk. Stir in the coconut. Fold in the egg whites.

Divide the batter between three eight-inch cake pans (well-greased and lined with wax paper). Bake the cakes at 350 degrees for 25-30 minutes. Turn the cakes out onto a wire rack and remove the wax paper. Cool completely before icing.

Thanks to the nuts, this icing is a cinch to spread; you needn’t worry about bits of cake and coconut flecking the creamy icing since it is already pebbled with the golden crunchy pecans. And the textured icing lends itself to artful swirls and swoops.

Beat together the cream cheese and butter. Add the vanilla and beat some more. Beat in the sugar. Add the pecans and mix well.

*Which is not totally true because there were a few scraps left on certain children’s plates that ended up getting dumped into the compost bucket. I did contemplate eating the abandoned morsels but decided that I needed to exercise some control.

About One Year Ago: The Stash, a list (and pictures) of all the food we stockpiled. Seeing all our hard labor consolidated into one list is deeply satisfying…and totally exhausting, even to me.