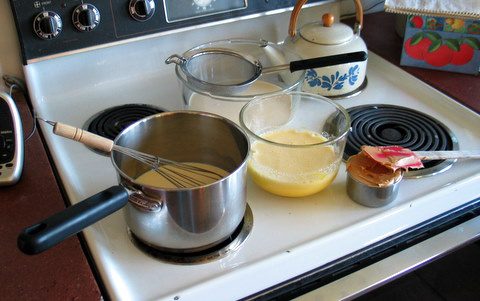 I apologize to all of you who have grown weary with my incessant prattling about chard and red beet greens and chicken and potatoes (there was a red raspberry dessert thrown in there, too, but come on, it had a fruit) and have grown desperate for something purely frivolous, like, say, ice cream.

How about it? Are you up for some creamy peanut-buttery ice cream, thickly studded with chopped-up peanut butter cups? Yes? 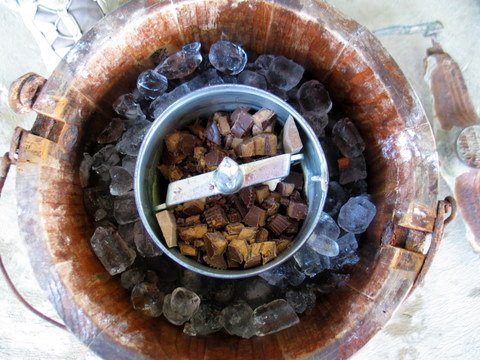 Okay, but first I’m going to tell you a story.

Once there was a little girl who didn’t get store-bought ice cream very often. Her parents made fine homemade ice cream, but, like white bread and celery, ice cream was a rare treat. The girl grew up and went to college where there was lots of ice cream in the cafeteria, and she ate it frequently, especially the soft serve. But then she got married, and because for the first time she had a fair amount of extra cash, a car, and easy access to the grocery store, she discovered the endless varieties of Ben and Jerry’s and thought she had finally died and gone to heaven (part of that floaty feeling might have had something to do with having just married the most gorgeous man alive). But then she and her husband left their comfortable middle-class existence with easy access to chain groceries that sold Ben and Jerry’s and flew to sweaty-hot Nicaragua where there was no decent ice cream to be found, though there was some fabulous Guanabana yogurt. When they came back to the states three years later they had a little boy and no money, and then the handsome husband caught cancer, found a job, and got cured, and the girl, who was now a young woman, caught another baby in her tummy and developed a fearsome sweet tooth, and then Ben and Jerry’s ice cream went on sale and because they had some money again thanks to the husband’s new job, the young woman brought cartons and cartons of the ice cream home from the store and she ate them every single night and gained forty pounds. After which she pushed out a little girl, rested for a few weeks, and then plunked the little boy and the baby girl into a clunky stroller and pushed them around their hilly neighborhood in an effort to shrink her buns and belly (she stopped eating Ben and Jerry’s, too). Years passed and not only did they acquire two more children and a vasectomy, they also purchased a used hand crank ice cream churn from a yard sale, a country house (not from a yard sale), and some milk shares from a local farm. Today, the young woman, who isn’t so young anymore, though she isn’t quite middle-aged either, has taught herself how to make thick, rich, creamy ice creams that taste just like Ben and Jerry’s, if not better, and even though they have more money than they ever had before and the chain grocery store is just ten minutes away, they hardly ever, maybe even never, buy Ben and Jerry’s. The end. 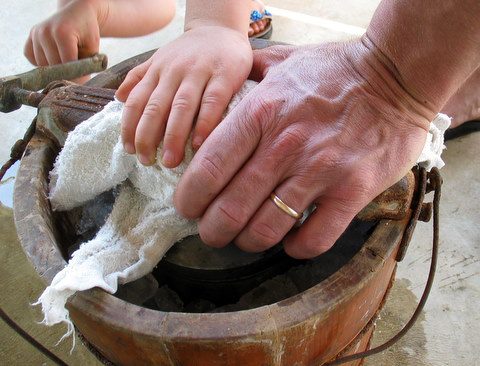 Peanut Butter Cup Ice Cream
Adapted from… oh dear, I don’t know where! Some place on the net, I guess. Sorry. 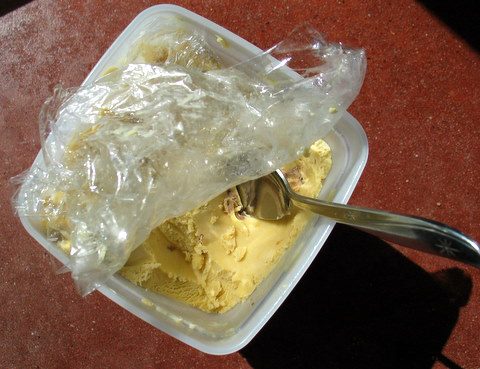 Do not use the miniature peanut butter cups; use the full-size cups, okay?

And I tell you to reserve part of the chopped candy because I’ve discovered that they don’t mix in evenly—often the ice cream at the bottom of the churn has only a few bits of candy while the ice cream at the top is loaded. Reserving some of the candy allows you to add it at the end when you’re serving the ice cream, or transferring it into freezer containers, creating an ice cream with even candy distribution.

Put the sugar and eggs in a mixing bowl and beat with a handheld mixer for about three minutes.

Heat the milk and one cup of the cream in a saucepan. Once hot, slowly add the milk and cream to the egg-sugar mixture, beating on low speed all the while. Then, dump the tempered eggs and milk back into the saucepan and stir over medium-high heat until the mixture has thickened slightly (do not boil). Remove the saucepan from the heat and pour the mixture through a fine-mesh strainer.

Whisk the peanut butter into the egg-milk mixture. Add the remaining cream and the vanilla. Chill the ice cream base in the refrigerator for 6 hours or overnight.

Churn the ice cream. When it is almost done, add three-quarters of the chopped peanut butter cups and finish churning. When transferring the ice cream to freezer containers (or eating it), stir the remaining bits of candy into the parts of the ice cream that are candy deprived. 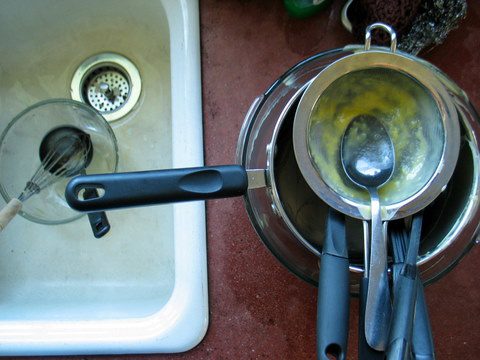 One year ago: Apricot Pandowdy. And a year and a day ago: Grace’s Vanilla Pudding and Baked Oatmeal. I was a blogging fiend, back in the day.