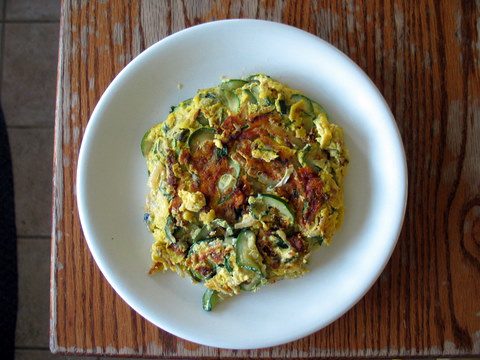 Now that I typed that title I realize the phrase sounds less like a description of a tricky dish (sliding a partly raw frittata out of the skillet onto a plate sounds way easier than it really is) and more like the name of an exotic dance (Hey, babe, let’s you and me hit the dance floor and do the Frittata!).

Maybe making a frittata is kind of like a dance, a kitchen dance complete with knife cha-cha–chops, spatula jabs, wrist jerks, pan flips, and the grand finale, the fork scoop-n-slide as you gobble up the savory frittata, moaning contentedly with every single bite. 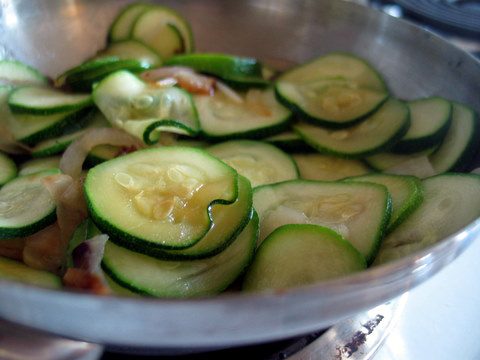 Yes, now I’m convinced that frittata-making is a dance, in this case a dance called El Baile Frittata de Zucchini. And as if the dish wasn’t already tempting enough, it becomes unbearably so when the title is spoken with a Spanish accent. Ooh-la-la! 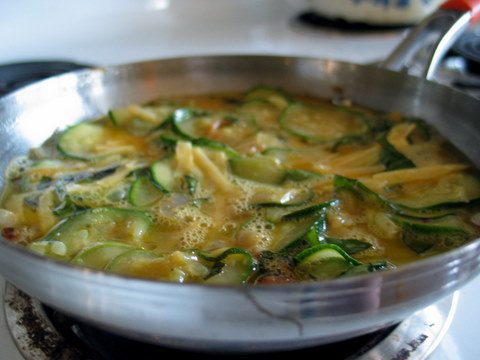 Seeing as it’s so irresistible, it’s a good thing this frittata is healthy and economical. If only all tempting things were this guilt-free! 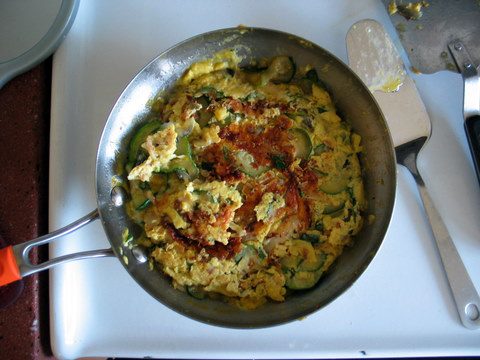 Come on, dance with me! Let’s cha-cha-cha la frittata-ta-ta! 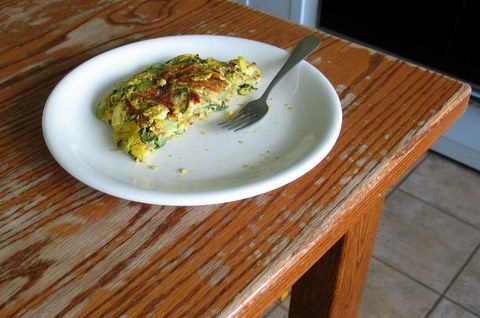 The smaller the zucchini, the better. I used a red onion, but any kind will do.

Serve this frittata as the main dish for any meal. With a piece of fruit and coffee, it is breakfast; in a pita, or sandwiched between two pieces of toast, it is lunch; and with a green salad and a crusty loaf of bread, it is supper.

Slice the zucchini lengthwise into two pieces and then cut each piece into eighth-inch thick half-moons (if the zucchini is small, don’t bother with cutting it lengthwise). Slice the onion in the same manner.

Heat a 12-inch skillet on medium-high heat, add a couple tablespoons of olive oil and the sliced onion, and cook till wilted and slightly brown, about five minutes. Add the zucchini slices and saute for another 10 minutes, or until tender. Add the fresh basil and remove the pan from the heat. Transfer the vegetables to another container, or if they are watery (mine never were), to a colander to drain.

Crack the eggs into a different bowl, whisk them well, add the salt, pepper, and cheese and whisk a bit more. Add the vegetables and stir to combine.

Return the skillet to the burner and turn the heat to low. Pour a tablespoon of oil into the pan. Gently add the vegetable-egg mixture, using your fingers or a fork to evenly spread them out. Cook the frittata for 15-20 minutes.

About One Year Ago: Salvation’s Chocolate Chip Cookies. Last year Molly unwittingly betrayed me; today (as well as many other times) I sing her praises. Harry Chapin speaks the truth: All my life’s a circle/sunrise and sundown….