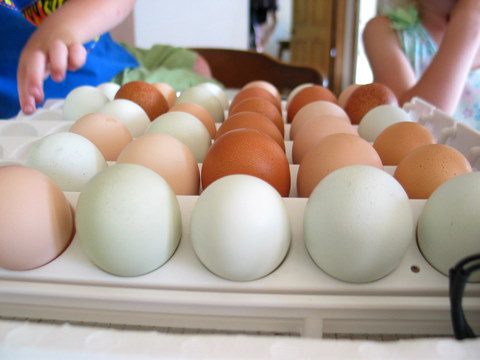 Mr. Handsome brought home a friend’s egg incubator and now we have thirty-some eggs cooking in the back hall.

The kids are excited, but to their little, only-in-the-present minds the twenty-one days they have to wait is a forever-long eternity. 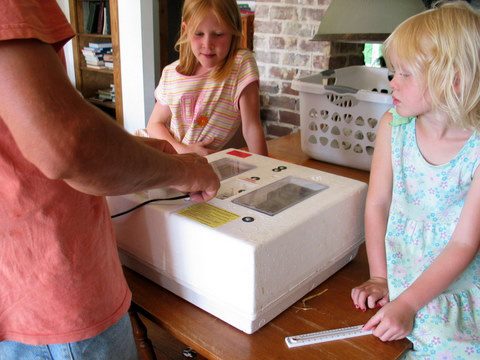 They ought to try a 42 week-long pregnancy. Now that’s waiting.

Why are the insides of my larger potatoes rotten? The outsides of the potatoes are gorgeous and firm, but the very centers are often yucky. 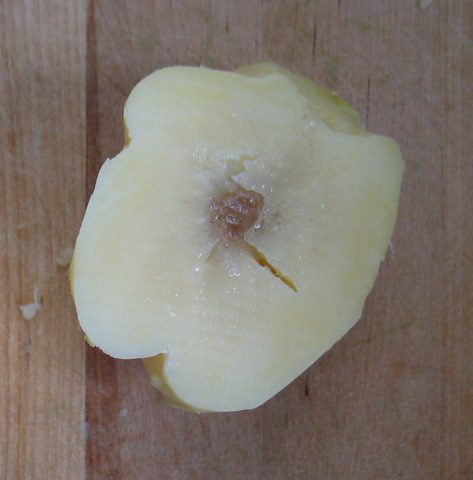 And in the same potato-y vein: Why is it that when I boil my potatoes, the outsides stay firm while the very centers tend to get a bit mushy-slimy? Does it have anything to do with the fact that I test the potatoes for doneness with a fork—do the fork marks allow for the boiling water to enter and sog up my potatoes’ insides?

Coming home from church on Sunday I realized that I had no quick food on hand for lunch. If it had been just us, we might have eaten granola and yogurt and called it a meal, but Yo-Yo had a friend along and I felt responsible for providing something a bit more well-rounded.

The day before I had cooked some starches to have on hand for the following week—a pot of brown rice and a large pile of new potatoes that I boiled, peeled, and then stuck in the fridge—so those were the foods I had to work with. Not very exciting, huh?

Once home, the kids ran off to play and I headed to my cookbook shelf to work on the food situation. I found just what I was looking for: a quick variation on scalloped potatoes that called for grated cooked potatoes with cheese, onions, and bread crumbs and then melted butter and milk poured over top. I set to work, adding some chopped ham to the potatoes, and for a side vegetable, putting a pot of peas on to boil. (Dessert was raspberry-lemon cake, whipped cream, and seedless raspberry sauce, all pre-made.)

The verdict? Mr. Handsome and I both loved the potatoes—pure comfort food and better than macaroni and cheese—and Yo-Yo’s friend had three helpings. 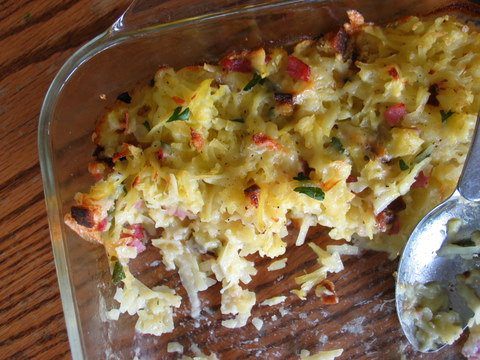 All in all, it was a pretty fine solution to a last-minute, no-thinking-ahead meal. In fact, it was almost exciting!

Add sausage or bacon in place of the ham, or omit the meat altogether.

Heat the milk and butter in a saucepan till the milk is hot and the butter has melted. Stir in the salt and pepper. Set aside.

In a large bowl, combine the grated potatoes, onion, bread crumbs, ham, parsley, and cheese and stir to combine. Put the mixture into a greased 9 x 12 baking dish, pour the hot milk over top, and bake, uncovered at 350 degrees for 30 minutes.

One year ago: Fruit Cobbler. (Excuse the dark, night-time pictures.)