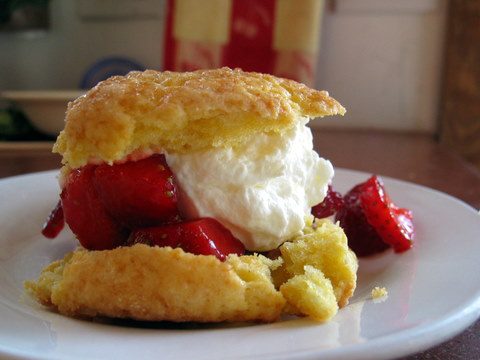 Our strawberries were less than stellar this year due to the Amazonian levels of rain. We pick over the patch every other day but the rot is always one step ahead. I would be depressed about this if it weren’t for the large quantity of strawberries that we still have in the freezer and jelly cupboard as a result of last year’s strawberry bonanza. Last year we put up way more than we could eat, and at least five different families got a turn to pick the patch. This year we’ve put up a fraction of the amount we need, and we haven’t shared with anybody.

Oh well. Such is life in the dirty world of gardening.

I really shouldn’t complain. We’ve been steadily eating the strawberries we have been getting, maybe even enjoying them more because we’re not totally inundated with them—the medium-sized bowl I get from picking a row or two seems too piddly to bother with putting up, so we just eat them instead.

In the course of the last couple weeks, I have discovered a couple (*) delightful recipes that showcase these ruby jewels. The one I’ll share with you now comes from Smitten Kitchen: strawberry shortcake.

When I was growing up, strawberry shortcake was not a dessert; it was dinner. My mother made two kinds of shortcake. The first was a plain sheet cake, though not nearly as rich or sweet as a cake, more like a cornbread without the cornmeal. The second type of shortcake was a drop biscuit that was sprinkled with sugar before baking. The sheet shortcake was cut into squares, a piece (or two) was set in the bottom of each person’s bowl and smothered in fresh strawberries, sprinkled with sugar, and drowned in milk. The biscuit shortcake was served in almost the same manner, except that each person crumbled the biscuit into the bowl before adding the fruit and milk. 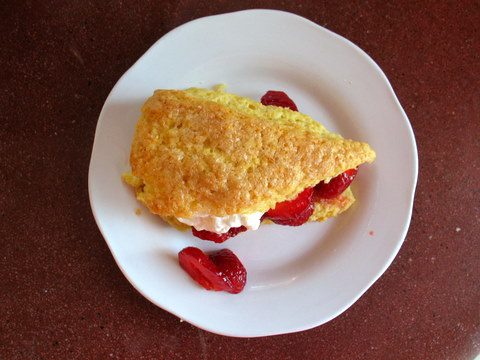 Because shortcake was the equivalent of a full meal, I never really understood how people could eat shortcake for a dessert. First, it was way too filling for a dessert course. Second, strawberries arrived in such large quantities that it was necessary to glut yourself with them. And third, both the sheet cake and the drop biscuits were never that great the second day, so it didn’t make sense to prepare it for dessert when you were bound to have leftovers that no one would want to eat. Strawberry shortcake was either all (the whole meal) or nothing. 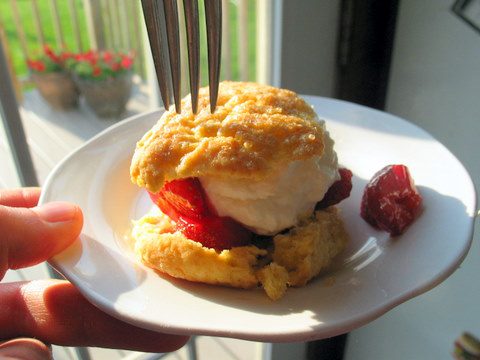 (The fork that you see coming down from above is Mr. Handsome’s. I had snatched his plate out from under his nose and the stabbing fork was his way of telling me he was done waiting.)

But then I tried Deb’s shortcake and for the first time I understood how shortcake could be a dessert. This shortcake biscuit is tender and airy, almost lacy, and it is still delicious the second day (it’s true that it’s not as good, but that doesn’t really matter when you consider how off-the-charts delicious it was in the first place). In fact, Mr. Handsome and I nearly had a fight over the leftover biscuits when I came into the kitchen and discovered him eating some shortcake. He must of realized he’d crossed an unspoken line because he took one look at my horror-stricken face and started talking, fast: Isavedyousomeoverthere. Ididn’ttakeallofitbecauseIknewyouwouldwantsome. Okay?

I said, Oh, that’s good of you. I was kind of worried, and he exhaled deeply and went back to enjoying his dessert. 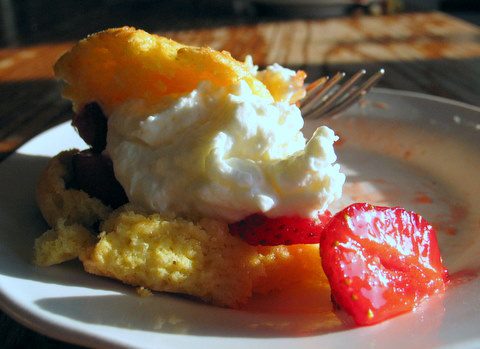 (Another shot of Mr. Handsome’s dessert. He was not very happy, and he let me know that in no uncertain terms, when I ordered he lay down his fork.)

The key to this recipe is the lemon. There’s probably some other keys, too, like lots of butter and cream and hard-boiled egg yolks and Demerara sugar, but I think the lemon in the clincher. There is lemon zest in the biscuit, and fresh lemon juice is stirred in with the strawberries. It’s a perfect pairing, and, like my leftovers, not something you want to meddle with. 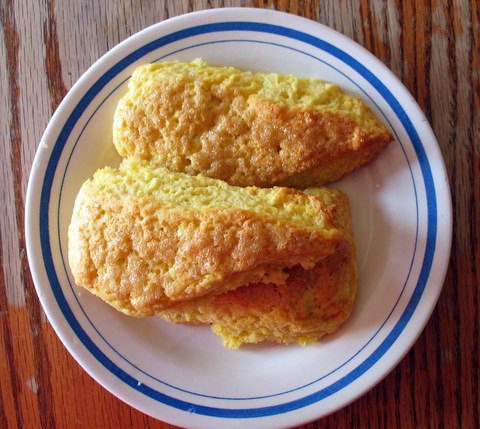 Deb says that you can use orange zest in place of the lemon. I am so sold on the lemon that I don’t ever plan to try the orange, but I’m telling you this anyway, just because I’d feel guilty if I didn’t.

Measure the first five ingredients (down through the salt) into the canister of a food processor and pulse to mix. Add the butter and zest and pulse some more. Add the cream and pulse, just until the mixture forms a ball.

Dump the dough out onto a floured kitchen counter, knead it a couple times just to pull it together, and then shape it into a disk about one-inch thick. Cut the dough into wedges, the same way you would for scones. Place the biscuits on a baking sheet lined with parchment paper, leaving space between the biscuits (they spread a bit because they are so tender and light). Chill the biscuits, uncovered, for about 20 minutes in the refrigerator (if chilling them longer, cover them with plastic wrap).

Remove the biscuits from the refrigerator, brush their tops with the extra cream and sprinkle them lightly with Demerara sugar.

Bake the biscuits at 350 degrees for 15-20 minutes. Allow them to cool to room temperature before serving. (I think these would freeze well, too. Simply bag them once they are cooled, and freeze. To thaw, let them sit at room temperature, uncovered.)

Combine the ingredients 10-30 minutes before serving.

Beat together until stiff peaks have formed.

To assemble:
Gently split open a biscuit (this is trickier than it sounds because the biscuits have a tendency to fall apart). Spoon some strawberries onto the biscuit, blob some whipped cream on the strawberries, and put the top half of the biscuit back on top.

*Coming up next … A dessert for adults only: Strawberry Margarita Pie.