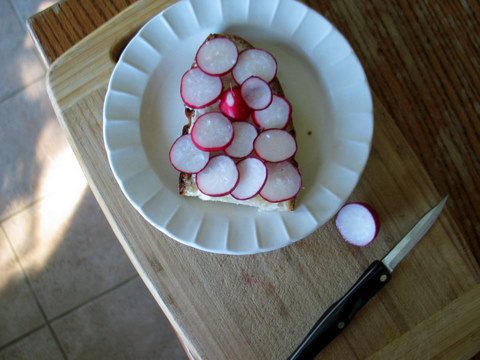 Two days in a row now, I’ve eaten the same thing for breakfast. Yesterday at a church picnic I told some friends about what I had for breakfast and they smiled and nodded in a let’s-humor-her way. One of them said, “It sounds like it might be good, but um, I don’t know if I’d want it for breakfast.”

Radishes for breakfast is a bit of a stretch, I suppose, but I’ve found that they do a fine job. No, let me rephrase that: they do a better-than-fine job.

I got the idea from Molly’s book A Homemade Life (but I think she also must’ve written about it on her blog because the idea was already familiar to me), and though I don’t remember her suggesting it for breakfast, I doubt she would wrinkle up her nose at my new custom. She might even copy me. 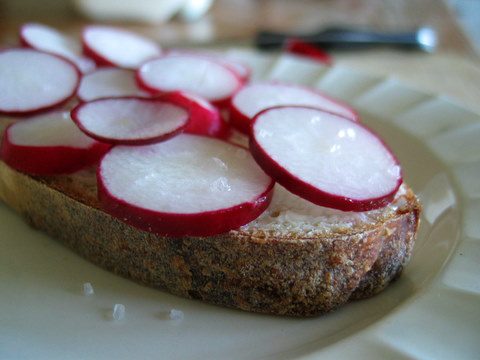 The meal couldn’t be more simple, really. All it takes is some good bread (I used a slice of my country white sourdough), radishes, butter, and crunchy salt. It’s important that the bread is bread, not toast, that the salt be coarse and sweet (I used Sel de Mer Gros—I have no idea what that means, but it comes in a red container), and that the radishes are fresh and crispy. 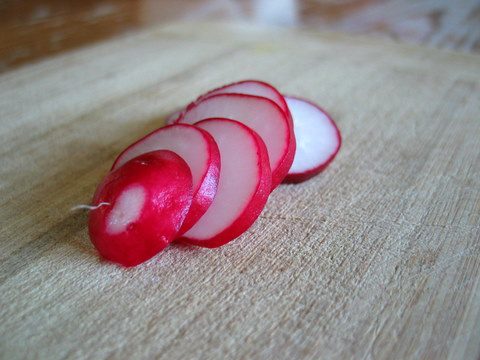 (Story: This morning as Mr. Handsome was heading out the door, the three youngest children were deep in the throes of Monday Morning Meltdown. I walked over and said to him, quite pleasantly considering the screams and yells coming from the room behind me, “Don’t you feel guilty leaving me now?” Mr. Handsome stopped lacing up his boot to study me, not sure if he should smile encouragingly, laugh, or turn tail and flee. I smiled soothingly and said, “To help appease your guilty feelings, please go out to the garden and pick me two big radishes.” He brought back four.) 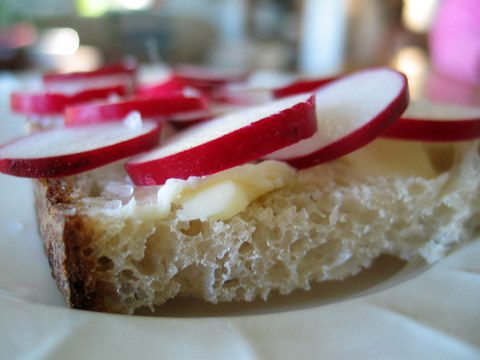 To assemble, thickly (you heard me) butter your bread, cover it with sliced radishes, and sprinkle the radishes with salt. And breakfast is served.