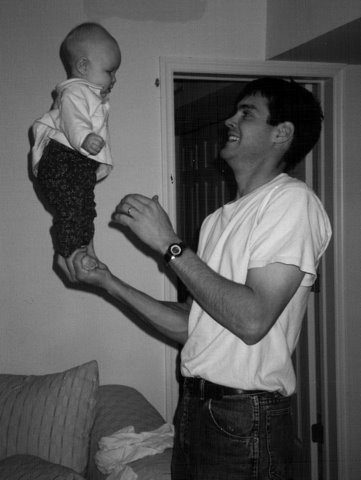 Fact: It is hard to keep your balance with a giant green slug on your head. Mr. Handsome knows this firsthand because he tried it.

Preamble: Parenting does not come natural. When people say, “I just can’t do it! It’s too hard,” and then look at us like we’re from a different planet since we have four kids and we homeschool them, I want to tell them this little fact: It is hard, and it doesn’t come natural. All parents—and maybe some more than others (we belong to the “some” group)—make bumbling fools of ourselves in the process. It takes awhile to find The Parenting Rhythm (not to be confused with The Rhythm Method). It’s super tricky to find the middle ground (not to be confused with “selling out”) between Being Yourself and Being A Parent. But it can be achieved… for about two pointy-toed steps, and then the wibbling-wobbling starts back up again. Oh, the joys of parenting!

Introduction: What follows is a little story about Mr. Handsome finding his balance, slug and all. It’s an awkward story, one that show’s Mr. Handsome’s gangly edges, but rest assured, he doesn’t fall off the edge and get squashed by the slug. After a little faltering, he reorganizes his principles, chucks the slug, and regains his balance (and some common sense). And he laughs about it now. He’s a good sport (in my meaner moments I might add, “Because he’s had a lot of practice”, but I’m feeling kind now, so I’ll bite my tongue and keep the peace).

(By the way, this is an excerpt from our book. And remember, the setting is Nicaragua.)

Mr. Handsome refused to use disposable diapers. Ever. When Yo-Yo was born, the hospital staff put him in a disposable, but as soon as we had Yo-Yo in our care, Mr. Handsome switched over to the cloth diapers, safety pins, and rubber pants that my mom had sent from the States. I, too, thought disposables were an awful waste, filling up landfills all over the world, taking decades to decompose. How much simpler (and more satisfactory) to wash out the rectangular cloths every few days and bleach them dry in the tropical sun. An added bonus was that the poop, once solids were being consumed, could be tossed in the dry latrine and reused as fertilizer after it decomposed.

I was thankful that I had a husband who didn’t baulk at the diapers and laundry, who understood that the extra work was worth it. So we martyred through the first couple months of Yo-Yo’s life, changing him about a dozen times a day and several more at night, proud of the upright life we were leading.

Then, when Yo-Yo was two and a half months old, our whole MCC (Mennonite Central Committee) team had to make a two-day bus trip to get to Guatemala for the regional retreat. Afterwards, Mr. Handsome and I were planning on attending language school for a couple weeks to brush up on our Spanish. I told Mr. Handsome that I thought we should take disposable diapers. He was horrified, “And spend all that money?”

“Disposables cost way too much, like five dollars for twenty!”

“But honey, MCC pays for them. We don’t need to worry about the money, and besides, it’s an MCC function, so they can help us out. I don’t want to lug around all those cloth diapers on our bus trips! And where do you think you’re going to wash them and hang them out? And when? We’re supposed to be in meetings and studying?”

“I’ll figure something out. Don’t worry about it,” he said.

“Fine. You can be crazy if you want. But it’s all your problem. I’m not helping out one iota, and don’t you dare ask me to do any of it! Got it?”

I was perturbed. I thought we were using cloth diapers because we wanted to save the environment; I didn’t realize that saving money was what was motivating Mr. Handsome. Somehow that didn’t seem as noble. And I was mad that he insisted on being insane. I was positive that I was right, but there was nothing I could do but let him find out for himself.

It only got worse. Mr. Handsome and I packed a couple backpacks for ourselves, and then he packed the largest duffle bag we had, an enormous green slug of a thing. He filled it with all seven dozen of our cloth diapers, a medium-sized plastic tub for soaking/washing the diapers, some bars of hard laundry soap and a container of the powdered detergent, rope for a wash line, and a big bag of clothespins.

I could hardly bear to watch when it came time for Mr. Handsome to drag the bulging monster of a bag out of the MCC gates and down the front steps. The taxi driver had to get out to help heave the bag into the trunk. I watched enviously as the other MCCers skipped along with just one bag slung over a shoulder (including the other couple that also had a baby), while I struggled to manage our own two backpacks and the diaper bag and Yo-Yo. The others all piled into the taxis, squishing in together. We, the rich, loaded-down gringos, filled our taxi all by ourselves.

In San Salvador we spent the night in the bus station’s hotel. Mr. Handsome had by then rearranged the bag’s contents so that he could carry it on his head and wear one of our backpacks. He looked crazy.

When we finally got to the Chiquimula retreat grounds, we were informed at the registration table that the planning committee had debated whether or not to put the parents with young children in the hotel-like rooms that had just been built, or in the cabins and cottages with everyone else. The good thing about the new facilities was that they were secluded and modern; the bad thing was that they didn’t have running water yet. I watched as Mr. Handsome had an internal hissy fit; my smug smile refused to stay hidden.

When we got to our room, I couldn’t help pointing out to Mr. Handsome that the rooms were fabulous and that the other parents didn’t seem fazed in the least bit. Mr. Handsome stomped around, hissing under his breath so that the people next door wouldn’t hear of our absurd problem. “How can they have a retreat with no running water? This is so stupid! What are they thinking?” He stormed outside to a grove of trees where he rigged up a clothesline, and then went off in search of some running water, a couple plastic bags of dirty diapers and the bag of detergent in the tub under his arm.

Mr. Handsome fell into a rhythm of washing diapers every morning and folding them in the evening. I pretended not to notice when he was late for breakfast or the first session, but I was pleased to note that he was late. Just like I had told him he would be.

One of the other MCCers, an experienced older woman who had birthed two children in Central America, saw our diapers hanging on the line and told us that oh yes, after her baby was born she refused to use disposable diapers, but then they went on a trip with cloth diapers and she vowed never to do that again, lugging around all the extra baggage on over-crowded buses was way too difficult. Mr. Handsome listened quietly, beginning to catch on, I hoped.

Retreat over, we set out for Quetzaltenango, a beautiful city situated above the clouds. Our host family was kind, but right away we noticed that they had only several small clotheslines in the tiny courtyard. Once again Mr. Handsome went about setting up shop. The first morning he tried to wash out the diapers, his fingers about froze off, the water was so chilly, and the diapers turned to sheets of ice as soon as he hung them up. That evening they still weren’t dry since they had received no sun and the day was damp. We tried to drape them over the night table and chair that were in our room, but they still hadn’t dried by morning. So that afternoon Mr. Handsome packed up the cloth diapers, shoved them into the giant green slug, and went to the market to buy some disposables. On the second try he purchased the correct size, and we both (Mr. Handsome’s an agreeable loser) gloated over how convenient they were.