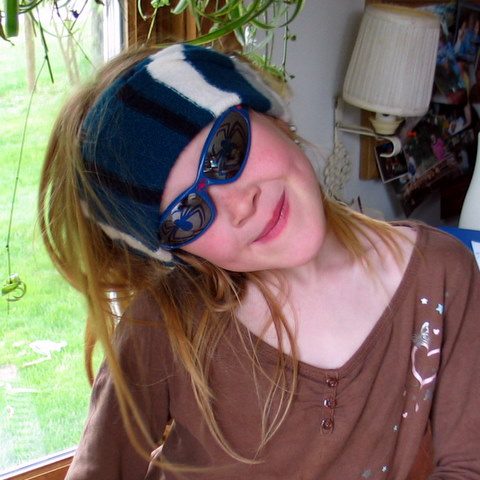 Remember all that stuff I told you about how Miss Becca Boo still isn’t reading but she doesn’t seem to mind? The other day my friend Shannon watched my kids, and later she filled me in on a little interaction that transpired between Miss Becca Boo and Jalyn, Shannon’s daughter who just turned six and started to read.

Miss Becca Boo was sitting on the couch, absorbed in some books. Jalyn walked into the room and asked, “Are you reading those books?”

Miss Becca Boo said, “No, I’m looking at the pictures.”

Jalyn said, “Would you like me to read them to you?”

Miss Becca Boo said yes, the girls snuggled up together on the sofa, and Jalyn read the books to Miss Becca Boo.

“Did she act embarrassed?” I asked Shannon.

“Not at all,” Shannon said. “I was watching really closely because of the stuff you’ve said and I think she is either totally clueless or else she has amazing self-confidence. And I don’t think she’s clueless.”

Aren’t most people ashamed of (or at least subdued by) their inferior abilities, even at a tender age? By all accounts, Miss Becca Boo ought to be blushing with embarrassment and ducking her head in shame when a child younger than her can read books she can’t. (Mr. Handsome was a late reader and he knows firsthand the heavy shame that comes with falling behind.) But she’s not, and even though I’m grateful (of course), I’m also downright mystified.

While I know that some of our decisions (keeping her out of the school system and letting her learn on her own time table, to name two) have played a role in this, I am not naive enough to take all the credit. We did the same things with Yo-Yo, and before reading clicked with him, he articulated embarrassment about his inferior abilities. And I doubt she gets her confidence from me. I’m riddled with all the standard feelings of inadequacy and fight many a mental battle in the War of Self-Acceptance (excuse my drama).

Maybe Miss Becca Boo has a non-judging personality, one that allows her to accept herself and others. Maybe she’s just not aware enough yet to feel bad that she’s behind and once she does she’ll push herself to learn. Or maybe, irregardless of how far behind she falls or what anyone says, she’ll learn when she’s ready, no bad feelings involved.

I’ll have to wait a few more months till I can find out how this ends. It’s kind of like a real-life mystery complete with twists and turns and ah-ha moments, but minus the smoking gun.

The story isn’t over yet. Hang on for Chapter Three.

About one year ago: Brown Bread and Fancy Granola and French Chocolate Granola (the chocolate granola is well on its way to becoming a classic).