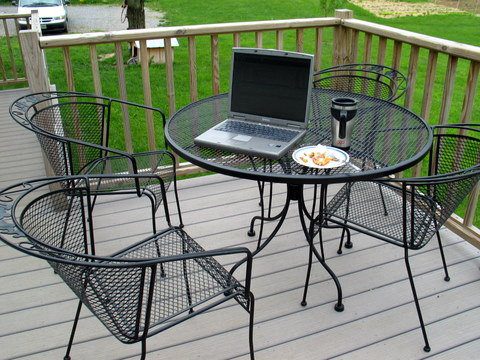 We got home late last night, after visiting my parents for a night and a day.

The Baby Nickel threw up on the way home, due to car sickness. I could tell something was wrong with him when he started clutching his mouth and moaning, so I yelled at Mr. Handsome to pull over. Mr. Handsome acted all confused and doubtful, like I maybe didn’t know what I was talking about, so he turned his head around to study the Baby Nickel himself. I was indignant, and repeated my commands louder and faster, “Pull over the car now. He is going to throw up. Pull over right there now. PULLOVERTHECARNOW!” He did, and just in the nick of time, too, for as soon as he leaned Nickel out of the side of the car, he hurled, causing Mr. Handsome to leap back surprised, and impressed.

Never doubt me, honey. I got darn good sensory reflexes when it comes to all things vomit. It’s what I do well—predict, anticipate, and catch puke. The clean-up part I leave for you.

Five minutes after the upchuck episode (which lengthened into a Pee Party), we had to pull over again because the girls were duking it out in the back seat. “Pulling over again” implies that Mr. Handsome slowed the car and brought it to a stop in a serene, calm manner. That would be a grossly inaccurate impression. It was more like a give-you-whiplash, nearly-slam-your-head-against-the-dashboard stop. Everyone got quiet, waiting for the explosion.

Mr. Handsome leaped out of his seat, jerked open the sliding door, leaned over the now-feeling-much-better Baby Nickel, stuck his face in Sweetsie’s, and said something to the effect of: “When we are driving in the car you will keep your hands, feet, body parts, spit rag, clothing, your appendages, everything, To! Thy! Self! Do you understand?!”

Yes, he said “thy”. I was surprised they didn’t all bust out laughing, but then again, I couldn’t see his face.

As Mr. Handsome climbed back into the driver’s seat, spitting mad, I saw flashing lights in the rearview mirror. For the second time in three minutes, everyone was deathly quiet. However, it was just a friendly highway safety dude checking to see if we were okay. “Yes, we’re fine. Just settling sibling squabbles,” said my sweetly smiling husband.

As we pulled back onto the highway (much more smoothly than how we stopped), I dissolved in a fit of giggles. On our last trip to NY we had pulled over to settle an enraged Sweetsie and a cop had stopped to check on us. I think that time I was in a much more foul mood because as we waited for the cop to show up at the window I hissed to Sweetsie, “He’s coming to take you to jail!” or something horrid like that. Leastways, that what the kids tell me I said—I don’t recollect that part of the story.

So anyway, the moral of the lesson is that if we ever are in trouble, we just need to pull over and chew out Sweetsie and help will materialize. It’s good to know these things.

Finally we were home. Mr. Handsome and I trundled the kids off to bed, and then we shuffled around the house putting away the water bottles and shoes and toothbrushes. I went off to get my shower and then to bed. Mr. Handsome said he needed to check on the chickens, but he didn’t come up to bed for a long time. When he did, he grinned sheepishly and said, “I had some stuff to take care of.” I knew he and the kids had some sort of surprise for Mother’s Day, but I had no idea what. I just grinned back and said, “Yeah, I guess so.”

When I came downstairs this morning and headed over to the kitchen sink to fix my coffee, I saw the surprise sitting on the deck: a table and four chairs! It was raining, but that didn’t faze me—I went out and sat in one of the chairs for a couple moments anyway, totally delighted with my new sitting area. 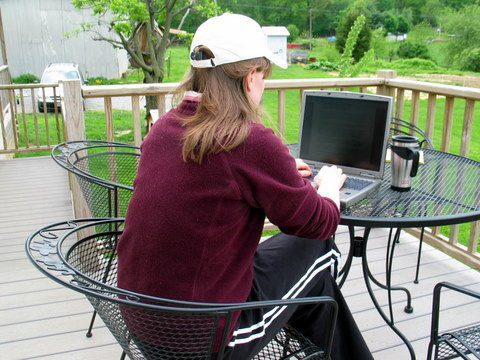 A little later when we were all sitting around the kitchen table eating our bowls of oatmeal, Yo-Yo said to Mr. Handsome, “Hey, wait a minute! You weren’t supposed to get her a present—she’s not your mom!”

Mr. Handsome said, “No, but she is the mother of my children.” 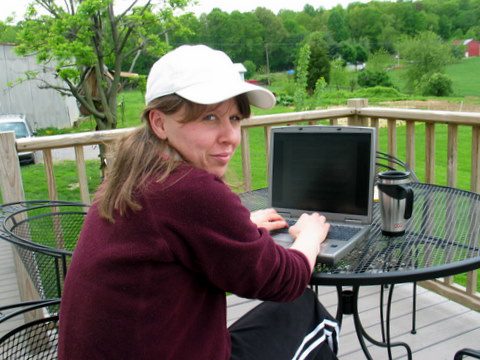