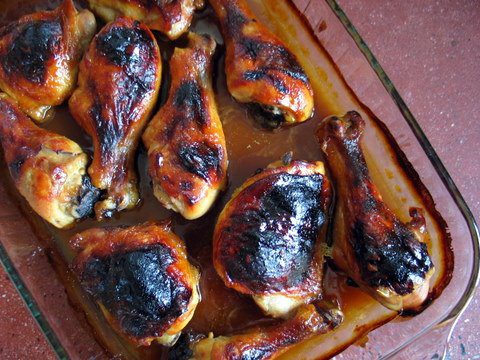 I’ve been planning to post this chicken dish, one of my favorite recipes from the More-With-Less Cookbook. I was going to talk about how my children are gong-ho over it and how Sweetsie ate three pieces the night I served it (not to mention the piles of brown rice, green beans, applesauce, etc). But then, this past Sunday our class had the privilege of discussing the story of the renowned cookbook with the deceased author’s husband Paul who, lucky-for-us, attends our church.

Like me, most of the other class members had grown up with the book and are plenty used to tossing around the term “more-with-less.” Our class had been discussing the economy (among other things) and found ourselves musing over how our parents’ generation was so much more thrifty than our generation is now. And then we started talking about the cookbook that had come out when we (some of us, anyway) were just little squirts running around in cloth diapers, and had been so formative in shaping our present-day Mennonite identity. As we talked it gradually dawned on us that Hey! The one person who knows the most about the book attends our church. Let’s get him to come talk with us!

And so he did. Paul came prepared with notes that he had unearthed from some archives and with a tote bag full of cookbooks, one of which was his wife’s own personal copy. He also had copies of the German and Japanese translations, as well as the cookbook’s sequels and the children’s cookbook (which I couldn’t help squealing over: I cooked out of this!). We passed them around, sniffing the old-book smells, trying to sound out the German word(s) for baking powder (I think), and pointing out favorite recipes, all the while listening to Paul as he talked.

The More-With-Less Cookbook came about as a result of the food shortage crisis in the mid-1970’s. During that time the Mennonite Church sent out a memo (which Paul wrote) to all the churches urging members to, among other things such as cutting back on gas usage, reduce their food expenditures and donate the saved money to Mennonite Central Committee.

Over a picnic supper one night, some friends said to Doris and Paul, “What we need is a new Mennonite cookbook.” The idea stuck with Doris and she eventually decided she’d like to tackle such a project. Her only hesitation was that the current Mennonite cookbook, Mennonite Community Cookbook by Mary Emma Showalter, was extremely popular, practically the bible of Mennonite cooking, and Doris didn’t want to trod on Mary Emma’s toes. Doris finally decided to contact Mary Emma and ask her blessing on the project, which Mary Emma gracious granted. (By the way, when I was in college I cleaned Mrs. Showalter’s house a couple times—the only thing I remember is that I didn’t know how to replace the foil under the electric stove’s burners and she had to show me.)

Doris sent out recipe requests to people all over the country, and especially to people who were living overseas (or who had lived overseas) and knew an extra thing or two about making do with less. Recipes poured in, were tested, and in less than two years about one-fourth of the recipes they had received were published in the cookbook.

They printed fifteen thousand cookbooks at the first printing, though they were worried they might not all sell. It was a needless worry—the books sold almost before they hit the shelves, and they had to print another ten thousand every couple weeks to meet the demand. Today over 800 thousand More-With-Less Cookbooks have been published. (Paul said that Doris decided to keep the first ten thousand dollars from the royalties as payment for her two years of work—any money that exceeded that went to Mennonite Central Committee. Paul followed the same policy when Living More-With-Less was published. I think he said that the books earned MCC well over a million dollars.)

Doris was working on her second book, Living More-With-Less, when she died in the late 70s. The sequels to the More-With-Less Cookbook, Extending the Table and Simply in Season, came out in 1991 and 2005 respectively. I call the series the Mennonite Cookbook Trilogy, and they are my go-to gifts for weddings and graduations and housewarmings. 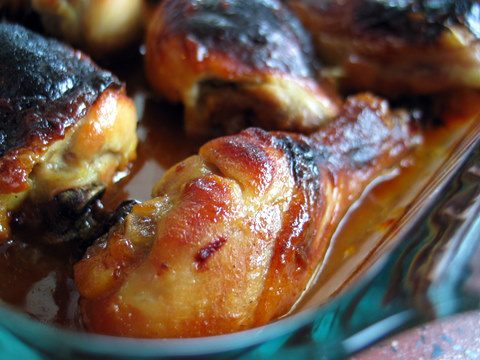 I upped the amount of butter and honey (and the seasonings accordingly) in order to make the dish a little saucier, but even so, it’s not an overly-saucy dish. All the saucy drippings get squabbled over and greedily slurped up.

My mother sometimes substitutes brown sugar for the honey.

You could cut back on the butter, if you are so inclined. Maybe add some chicken stock instead.

Melt the butter in a saucepan and add the rest of the ingredients, stirring until combined. Pour the warm sauce over the chicken pieces.

Bake the chicken, uncovered, at 350 degrees for 60-90 minutes, periodically spooning the sauce over the chicken pieces. The chicken is done when it is nicely browned.