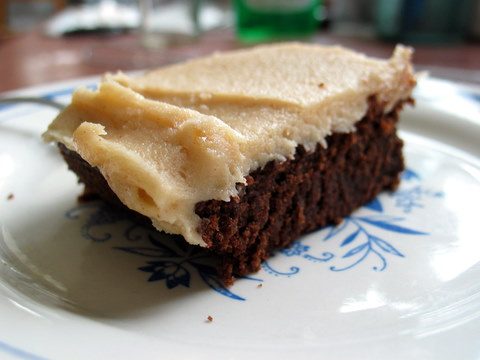 Ever since I made those coconut brownies I’ve had to endure the several cups of the leftover chocolate glaze staring me in the face every time I opened the refrigerator door. Finally, following in the footsteps of Cookie Baker Lynn, I created myself some glake (cake made from glaze equals glake), though it maybe was more brownie than cake, in which case they should be called glownies. Or, we could put the two words together and call it glownake. Whatever the wordage, the end result was a dry brownie, not very noteworthy at all. Except for the icing.

I made a peanut butter frosting, courtesy of Deb, and it crowns the glake in such a way that you can forgive it (the glake, not the icing) for sucking all the moisture from your salivary glands.

I will not be making these clowning glownies again, but the icing is a keeper. 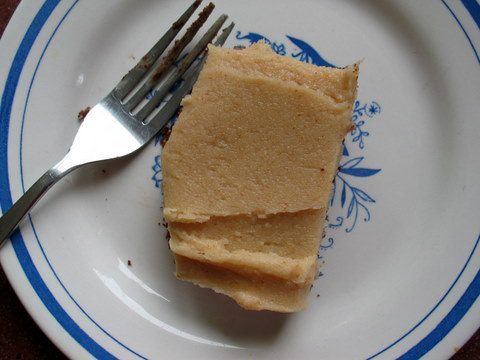 Ps. In keeping with this chocolate-peanut butter theme I have going, I’ll be making some chocolate-peanut butter eggs tonight, that is, as soon as Mr. Handsome gets home with the cream cheese (go ahead and forget the bacon, honey—just don’t you dare forget that creamy block of cheese) that I need for the filling (which is really quite similar to this frosting).

I used natural peanut butter (with salt), and even though Deb says that it’s best to use commercial creamy peanut butter because the oil might separate out, I didn’t have any problems.

Cream together the cream cheese and butter. Add the sugar and mix well. Add the peanut butter and blend till smooth.

Warning: Do not sample the icing at all because once you taste it you will plunge headlong down the slippery slope of gluttony and greed, and, as a result, you will not have any icing left with which to ice the cake. Which was the whole reason for making the frosting in the first place.