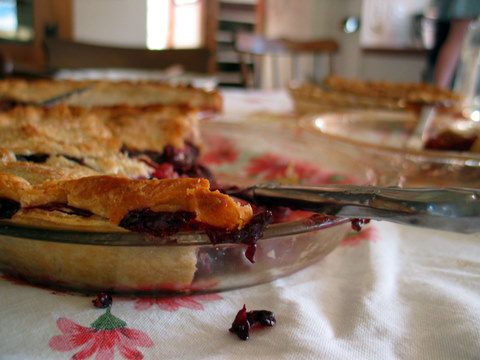 “What is the purpose of flies, anyhow?” I blurted.

Friends and family had joined us for dinner and we were still lounging about in our chairs, sated with the multiple pieces of pie we had just eaten: quiche, chickpea and chard, peach, rhubarb, blackberry, and sour cherry (yes, I was a bit insane to undertake such a project, but by the time I realized that, the work had been completed and we were happily full). The annoying black critters were zipping about our heads as energetically as ever, reminding me of the question that Yo-Yo had posed to me earlier and prompting me to toss it out to the group.

The answers were varied: “For the frogs … A plague to keep us humble … It flies in the face of reason.” In other words, nobody knew.

Our fly infestation hit an all-time high the following night. When we got up from dinner we discovered that the kitchen floor was covered with flies. Every time one of us walked to the fridge, to the stove, to the sink, swarms rose up into the air, a seething cloud of filth. It was unbelievably disgusting.

We quickly went about washing dishes, putting food away, hanging an extra fly tape, and vigorously smacking the darn things in a wild wholesale slaughter. I went from one side of the kitchen smack-smack-smacking with my Tiny-Little Brother coming along behind with the vacuum suck-suck-sucking. As soon as he cleaned one area of the floor and moved to the newest battlegrounds, I went back to the cleaned section and dirtied it all over again. After about fifteen minutes of methodical mass murder, we were down to a permissible number of flies.

The next morning Mr. Handsome attempted a homemade flytrap. I chuckled, but didn’t poke too much fun—if his method worked, I was willing to wreath our house with syrup-and-vinegar-filled plastic milk jugs. 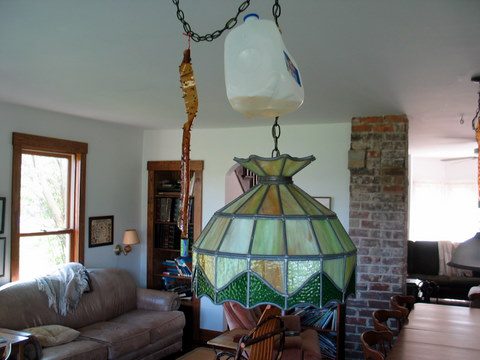 But it didn’t work, and we’re back to our standard green-and-yellow art decor—at least it matches rather well with our table lamp. Kind of whimsical, I think. The gooey flies occasionally drip off down on to the table, so it’s advisable not to eat raisin bran anywhere in the vicinity.

During fly season I spend a lot of time thinking about shoofly pie. For real. I go around saying: I am so sick of these flies! This is disgusting! This is unspeakable! Scram! Get out of here. Die! SHOO! And then I think: Pie.

Shoo + Fly = Pie. It’s a basic cultural/culinary equation. It’s like that word association game that tells how smart you are. Someone shouts out “murder” and then you say “knife, dead, cold-blooded, assassin, and flyswatter!” Or they call out the word “fly” and you say “buzz, annoying, filthy, flyswatter, and pie.” Then the evaluator knows that not only are you a certifiable genius, you also hail from hearty Pennsylvania Dutch farmer stock. Moo. 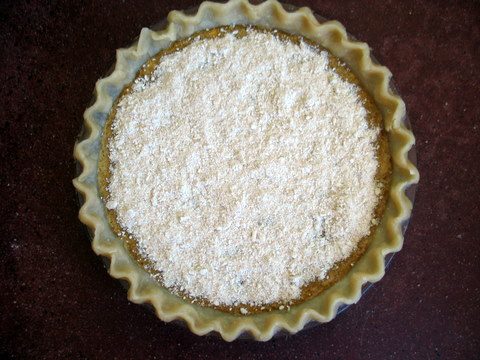 In between smashing flies and wiping them up (yes, I’m the heavy-handed swatter-er type—the flatter the fly the better), I’ve been attempting to perfect my shoofly pie recipe. My standard recipe comes from the More-With-Less Cookbook. It’s a cake-top pie with a gooey bottom, but I have trouble with the bottom goo bubbling up and out, leaving me with a mostly dry pie and a very stinky kitchen. 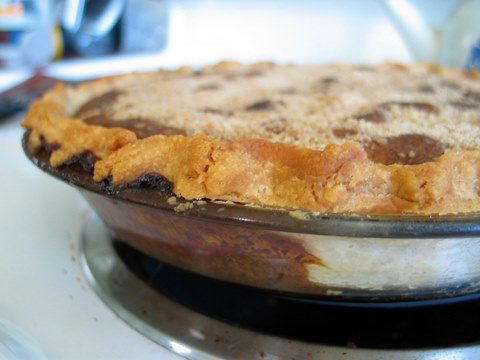 Then I tried the shoofly pie from The Pie and Pastry Bible. That recipe called for coffee in the liquid mixture, as well as cinnamon and nutmeg, and was baked in a cream cheese crust. It was altogether a different animal from the other recipe, full of complex, intense flavors. 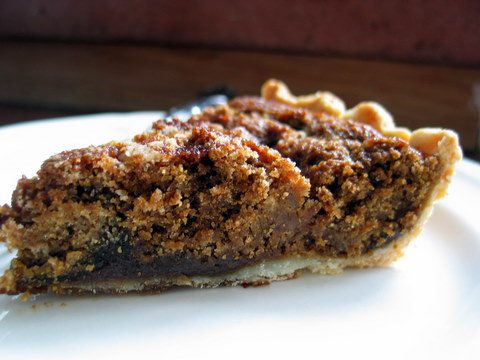 Even though that recipe (pictured above) was quite elegant, I’m going to go ahead and give you the recipe for the shoofly pie from the More-with-Less Cookbook since it is the most traditional recipe that I know. If you have a shoofly pie recipe that is your all-time favorite, please pass it on to me (keeping in mind that it must have a gooey bottom). There’s a chance it might become my favorite recipe, too.

I suggest using an unsulfured molasses, such as Grandma’s—sulfured molasses has a bitter flavor. If the molasses flavor is still too strong for your taste, you may want to substitute part of the molasses with some light corn syrup, King syrup, or maybe even some maple syrup, though I haven’t tried that myself.

This pie, if done properly, yields a layer of gooey, molasses-ness at the bottom and a moist cake-top. Make sure your pie crust has no holes or cracks where the liquid filling might leak out, and take care not to over-fill the pie. Mark my words, it is better to throw out a couple tablespoons of filling than to burn up the extra on the floor of the oven!

Using your fingers, mix together the flour, brown sugar, and butter until crumbly and fine. Set aside ½ cup of the crumbs to sprinkle on top the pie before baking.

In a large mixing bowl stir together the molasses, egg, remaining 3/4 cup of water (cold this time—you don’t want to cook the egg), and then add the dissolved baking soda. Add the crumb mixture (not the reserved half-cup portion) and stir well before pouring into the pie shell. Sprinkle the remaining crumbs over the top.

Bake the pie for about 35 minutes at 375 degrees, until no longer wibbly-wobbly and the cake top springs back when you touch it with your finger.