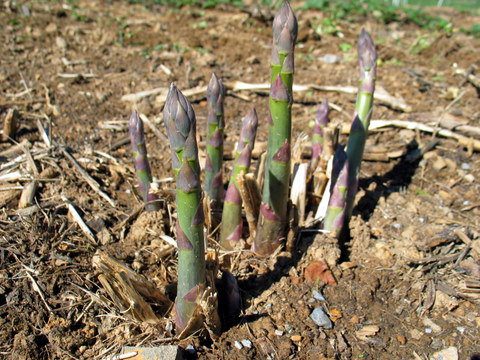 I picked the first asparagus yesterday afternoon. There wasn’t much, just enough for Mr. Handsome and me to each have a serving (we told the kids they couldn’t have any; half-hearted reverse psychology that didn’t work).

When the asparagus pops up I feel like shouting with happiness “Now we won’t die of scurvy!” Because my basement is still well-stocked, despite my best intentions, with oodles of canning and freezing, I think this asparagus-induced relief must be some sort of primal response that all people have: Green things in the spring make us feel that we can go on. 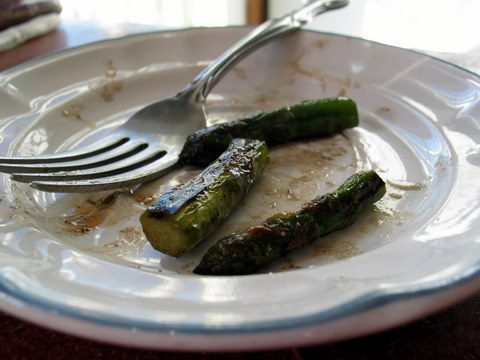 I ran down cellar and brought up three trays of canned goods to restock our jelly cupboard. I’m attempting to be ruthless with the consumption of our jar-ed produce. It’s easier to fight my hoarding instincts when there is asparagus. 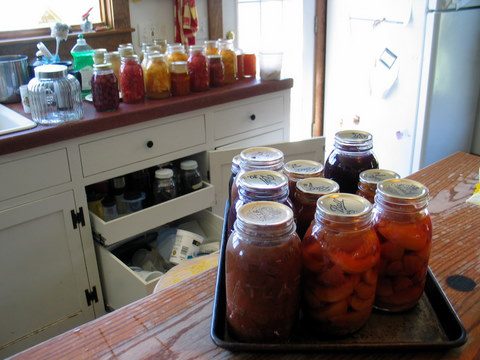 In her book Animal, Vegetable, Miracle, Barbara Kingsolver says all sorts of notable things about asparagus, my favorites of which are:

*Contrary to lore, fat spears are no more tender or mature than thin ones; each shoot begins life with its own particular girth.

*Older, healthier asparagus plants produce chunkier, more multiple shoots. Underneath lies an octopus-shaped affair of chubby roots (called a crown) that stores enough starch through the winter to arrange the phallic send-up when winter starts to break. The effect is rather sexy, if you’re the type to see things that way. Europeans of the Renaissance swore by it as an aphrodisiac, and the church banned it from nunneries.

*The earliest recipes for this vegetable are about 2, 500 years old, written in ancient Greek and Egyptian hieroglyphics, suggesting the Mediterranean as the plant’s homeland.

*Asparagus even inspired the earliest frozen-food industry, in the first century… all so it could be served with a big ta-daa at the autumnal Feast of Epicurus.

*It’s best eaten the day it is cut, period …. The fresh stems have the tight, shiny sex appeal of dressed-up matrons on the dance floor of a Latin social club, but they lose their shine and crispness so quickly when the song is over. The sweetness goes starchy.

*Europeans celebrate the short season of abundant asparagus as a form of holiday. In the Netherlands the first cutting coincides with Father’s Day, on which restaurants may feature all-asparagus menus and hand out neckties decorated with asparagus spears. 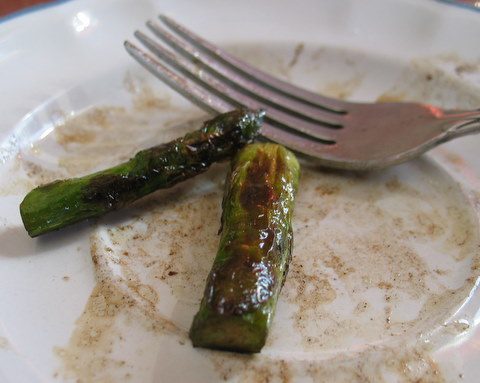 Put a cast-iron skillet (should be big enough so that it will hold all the asparagus in one layer) on the stove and turn the burner to medium-high heat. When the skillet is hot, add the butter (don’t be shy) and scrape it around until it has melted.

Add the asparagus, spreading it out to cover the skillet’s bottom. Allow it to cook for a minute or two before giving the first stir. Salt liberally.

Keep an eye on the asparagus, giving it an occasional stir or shake until it is no longer watery (the water comes from the asparagus itself—do not add any) and the spears are partially blackened.