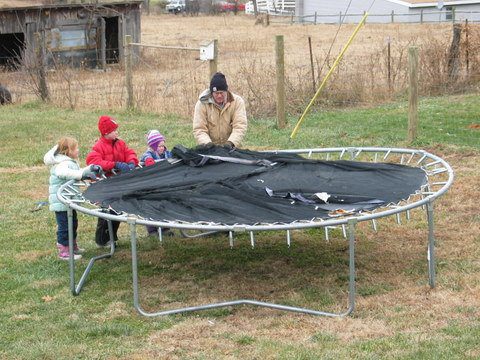 The outside play area has recently gotten a pretty big boost with the addition of our “new” trampoline. It’s smaller than the one we had before, but it has a net.

Though I suppose some could argue that the lack of a safety net made the kids play safer and now they will get rough and careless and we will have broken bones and black eyes galore. On the other hand, maybe it was just luck that there were no accidents for the two years that we had a net-less trampoline.

All this talk of broken bones and good luck is starting to make me feel a little uneasy, so let’s not discuss this anymore.

The work on the clubhouse keeps moving along. 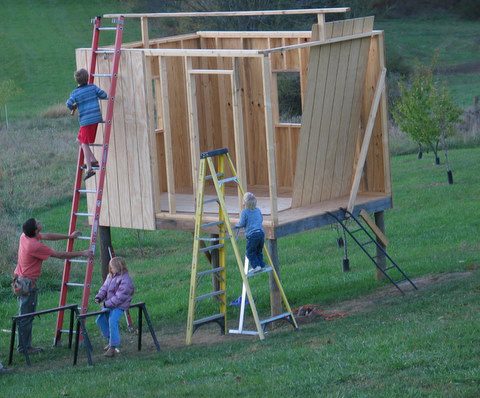 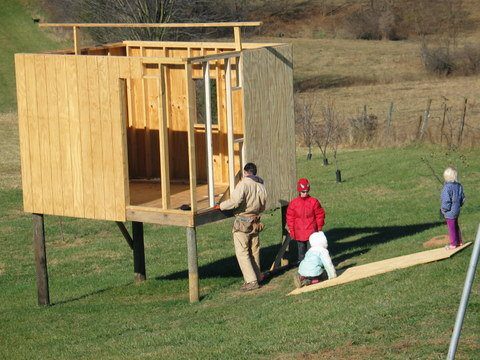 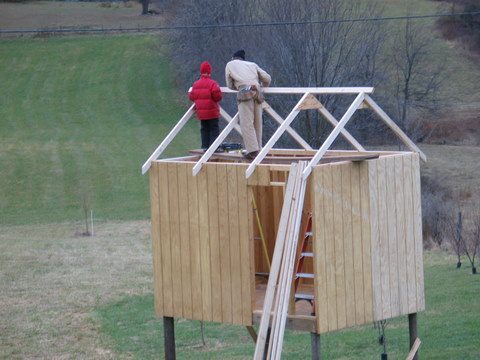 Now that it’s getting dark so early, they don’t have much time to work on it after Mr. Handsome gets home, but they work as long as they can. 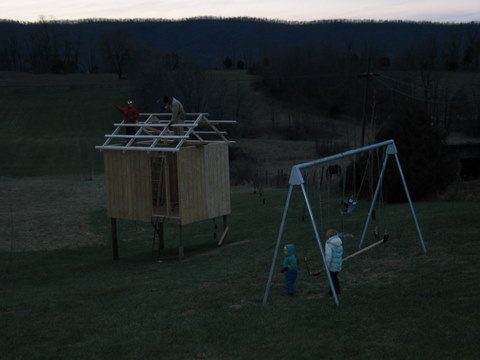 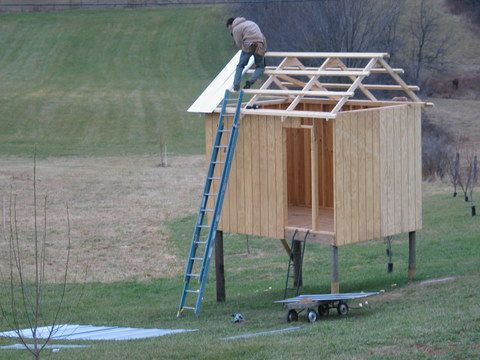 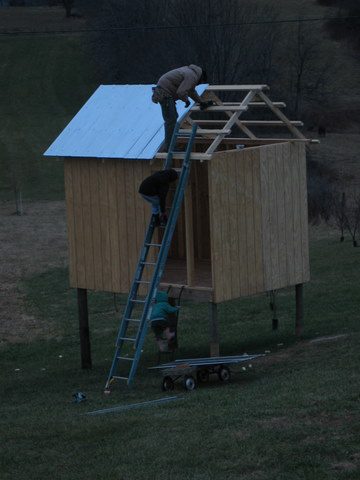 So that’s why the pictures are so dark—it’s dark outside.

It’s a good thing the outside play area is getting a face-lift. Two of Mr. Handsome’s siblings and their spouses and kids will be descending upon our home over the Christmas holidays. The one family has five children and the other family has three, so that means that there will be eighteen people eating and sleeping in our home. Our house is plenty big, about 1800 square feet, but it will feel like an 800 square foot house what with all the coats and hats and boots, air mattresses, pillows, towels, and dirty dishes piled about. Not that I ever let dirty dishes pile up around my house.

I am not daunted by the prospect of smashing in lots of Mr. Handsome’s family members. No, not at all. When we lived in our 300-something square foot, one-room adobe house (that we built with our bare hands) in Nicaragua we once had nine people staying in that space. Granted, we were only together for one day (or was it two?), but we had no running water, and the refrigerator was just a little bigger than a dorm fridge. And there were scorpions. But we were used to hauling our own water, using a pee-pot at night (though not when we had company—we spared them our tinkle-tinkle sounds), and dealing with scorpions.

The scorpions were nasty. They looked like Sin Incarnate. We learned to peer down in the latrine before delicately perching our tender bums on the cold concrete, to shake out our shoes before slipping our feet into them, and lifting our pillows and peeking under the bedsheets before crawling into bed at night. And Mr. Handsome got a lot of practice dashing for his machete and then smashing everything in sight as he frantically tried to chop the evil creatures as they skittered away. Despite all that practice, he had an uncanny ability to almost never hit the little buggers.

And while we are on the subject of scorpions I might as well tell you that once Mr. Handsome pulled on his jeans without shaking them first, and well, let’s just say that it was a unique way of putting on jeans, which involved much yelling and leaping about and culminated in a high-speed strip show. Another time a scorpion fell from the ceiling tiles, right down the inside of my sweatshirt, and then it was my turn to treat him (and my poor brother) to my own version of a strip show. Scorpions have a way of bringing out the r-rated in a person.

Back to the upcoming onslaught of company. I am very excited. Really, I am. But, if I’m going to be honest, I need to tell you that I’m also stressed. I tend to panic fairly easily, and Mr. Handsome tends to be unsympathetic to this emotional weakness of mine. When that happens, we do not make a very good team. Saturday’s conversation went something like this:

Me: We need to sit down and make a list of all the stuff that has to get done.

Me: There is a lot of work we should do now so that we aren’t so rushed closer to the time, you know.

Me: You are so observant. Yes, I’m getting stressed! There will be eighteen people in this house. Do you realize what that means?

Mr. Handsome: Yeah? So what? What’s there to do? The house–

Me: So what? So what? I can not believe you just said that! Where is everyone going to sleep? What are we going to eat? I have to think through all that ahead of time! I don’t want to work nonstop while that everyone is here! I want to enjoy the visit, too! And we don’t just have that visit to get ready for—we also have to get ready for Christmas. And my family is coming before your family and then we’re traveling to Pennsylvania. What’s there to do?!

Mr. Handsome, speaking calmly and slowly, and with (how dare he!) a smile in his voice: Just calm down, okay? You are getting worked up over nothing. They could all walk in the door right now and it would be just fine. What is there that really needs to get done? I think the house is fine just as it is.

Me, totally taking the bait and knowing it, but unable to help myself—I am shrieking, stomping, and flapping my arms: THAT IS NOT TRUE AND YOU KNOW IT! YOU ARE MAKING MY ANXIETY WORSE! YOU ARE NOT BEING HELPFUL, SO STOP IT RIGHT THIS VERY MINUTE!

And so then he stopped it (smart man), and I made a list and he absentmindedly listened to me without any arguing (again, smart man), and then he went outside to set up the trampoline and when he came in that evening, he went straight to the back hall which he proceeded to reorganize and thoroughly clean.

I felt much better.

If I give the impression that I don’t want to have company, I’m sorry because that is most definitely not the case. I love having company, especially family.

But these bouts of panic are just something I have to go through, kind of like a ritual cleansing. Thankfully, these attacks only strike every now and then (sometimes once a day, and sometimes, in my weaker moments, once an hour), and they are not totally without purpose. They do a very fine job of getting Mr. Handsome on board (they are much more effective than rational conversation, as you can see from the above conversation), and when Mr. Handsome gets on board, the house gets clean, lickety-split, and then the company comes (yippee!) and we all, me included, have a swell time.