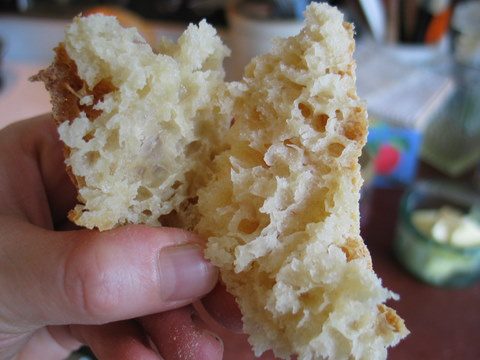 This one-day bread is not difficult to make, though the first time around you will fret over it because it will be the wettest dough that you have ever yet made, I bet. Learning the ropes of handling puddle-wet dough as opposed to an elastic-ball of dough that you can knead the crap out of is certainly challenging, but also fun. Eventually it becomes simple, and then it starts feeling like old hat. (To be honest, I’m not there yet, so that last sentence is purely hopeful speculation.)

The point of having such a wet dough is that you get lots of nice, big holes. This bread should be served alongside something that you can dip it into, such as soup or Peposo. It’s also very good split in half and toasted—kind of like an English muffin.

The bread is best fresh because after the first 24-36 hours it tends to harden quite a bit. I think the leftover pieces will make a splendid bread pudding.

Silverton uses this dough as a basis for a number of other recipes, such as Rustic Olive-Herb Bread, Focaccia, and Italian Bread Sticks, so there is lots of room for playing around. 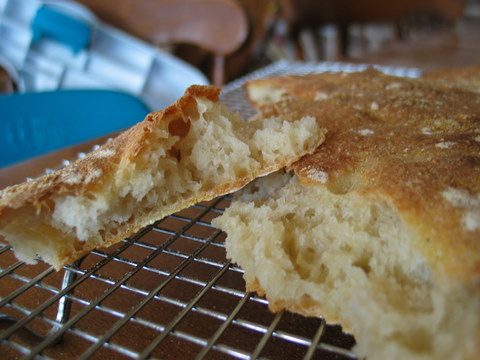 Put 2 1/3 cups water, the starter, yeast, and flour in your hand-dandy Kitchen Aid mixing bowl and mix for six minutes (or do it by hand and get really big arm muscles). Cover the dough with a cloth and let rest for 20 minutes. Add the salt and mix for 2 more minutes.

In a small bowl mix the remaining 1/3 cup water, the milk, and the olive oil. Keeping the mixer on low speed, slowly add the wet ingredients. No matter how slowly you add the liquids, there will still be some sloshing, so have a cloth ready to loosely drape over the mixer to act as a make-shift shield. Once the liquids are blended in, mix for another 4 minutes. Cover the bowl with a shower cap or plastic wrap and let it rest for 2-3 hours, or until it has doubled in size. 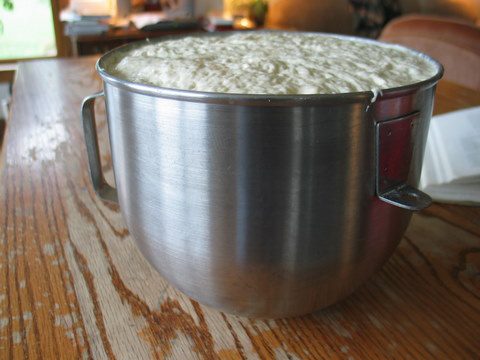 Heavily sprinkle your work surface with flour and dump out the risen dough. Sprinkle the puddle of dough with more flour and cover with a cloth and leave it alone for 20 minutes. 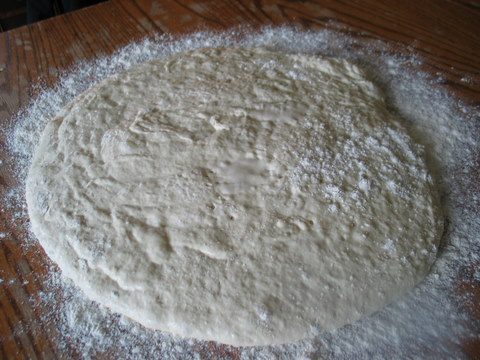 Get out two cookie sheets and cover them with large pieces of parchment paper. Sprinkle the papers with cornmeal and then bread flour. 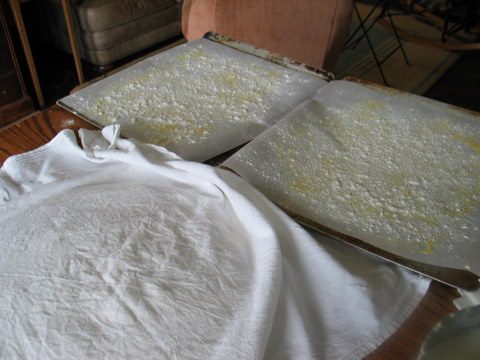 Cut the dough in half (it will feel like you are cutting Elmer’s glue), 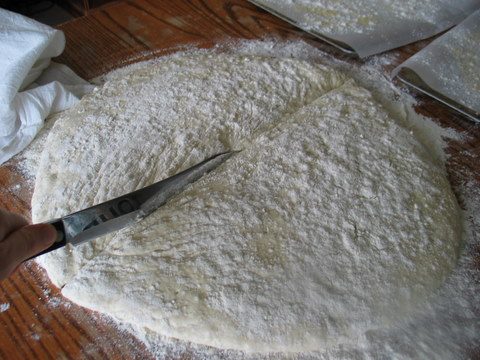 and somehow, with much rigorous maneuvering of your shoulders, transfer one of the dough puddles to a cookie sheet, roughly spreading out the dough as you lay it down so that it is about 8 x 10 inches and about 1 ½ inches thick (mine was more spread out and thinner—gotta work on that). 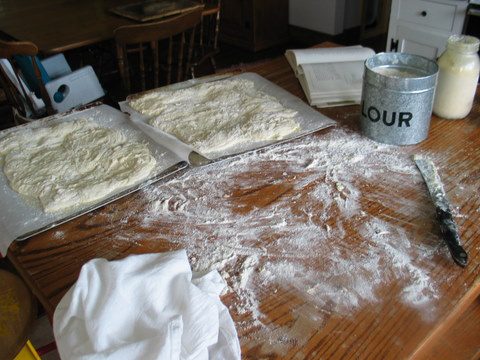 Repeat the process with Dough Puddle Number Two. Dimple the dough-puddles with your fingers, and sprinkle the tops of the dough with bread flour and cornmeal. Cover with a cloth and let them proof for 2 hours. 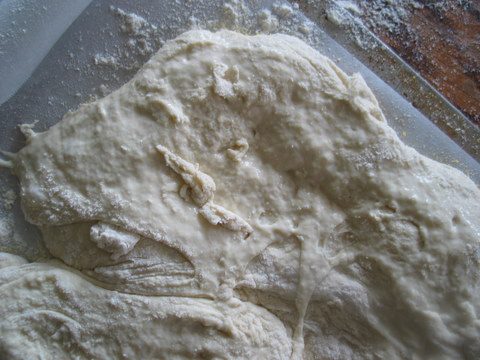 Preheat the oven to 500 degrees, re-dimple the dough, and when the oven is ready, slide Puddle Number One, along with it’s piece of parchment paper, onto the baking stone.

Make sure to spritz the oven with water: once before putting in the loaf of bread, once right after putting the loaf in, 2 ½ minutes later, and then 2 ½ minutes later. Reduce the oven temperature to 450 degrees and keep the oven shut for the next 15 minutes. Remove the parchment paper and allow to bake for another 5-10 minutes. Crank the oven back up and repeat with the next loaf, er, puddle. 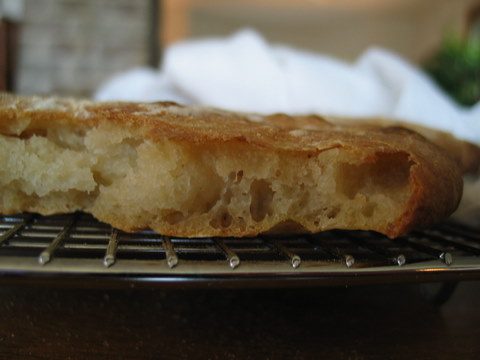