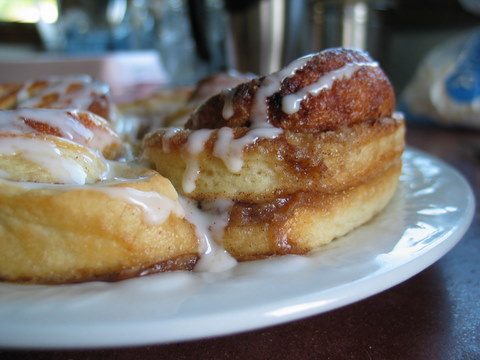 For the filling:
(I do not measure these ingredients, preferring to rely on my senses to get the right quantity, so the following amounts are just guesstimates.)
2-3 sticks butter
4-6 cups brown sugar
1/4 – ½ cup cinnamon

Flour a large work surface, or else, if you don’t have enough counter space, cut your dough into smaller chunks and work with only one portion at a time. This is an entire batch of potato dough—I rolled it out all at one time and then ran out of table space. It was a bit unwieldy, to say the least, so from now one I will be dividing the dough into smaller, more manageable portions. 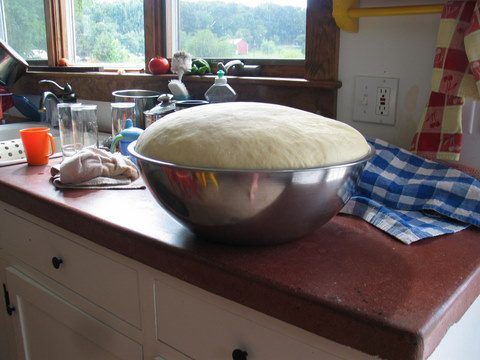 Roll the dough into a rectangle. You want the dough to be much longer than it is high because if you make it too high (the up and down part) the end result is a really fat, enormous sweet roll. But then again, that might be the effect you’re going after. If you prefer small, dainty sweet rolls, roll out the dough only four or five inches high.

Melt the butter and spread it over the dough. Next, sprinkle on the brown sugar—don’t skimp—and follow with the cinnamon. 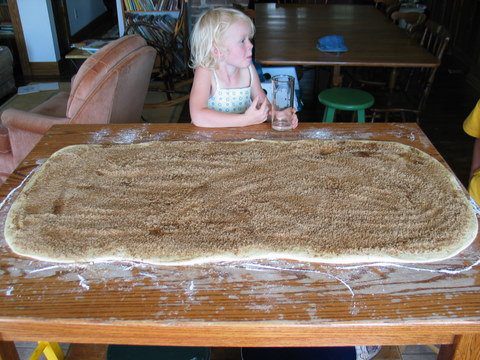 Roll the dough from the top to the bottom. 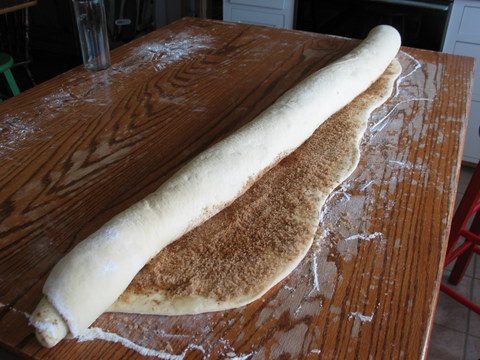 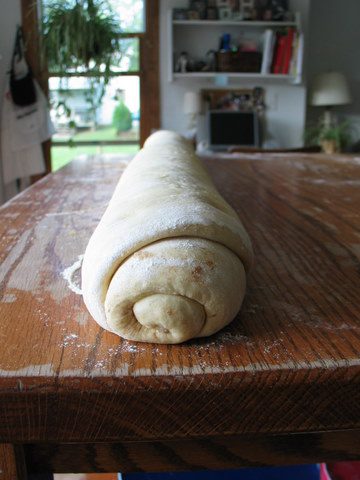 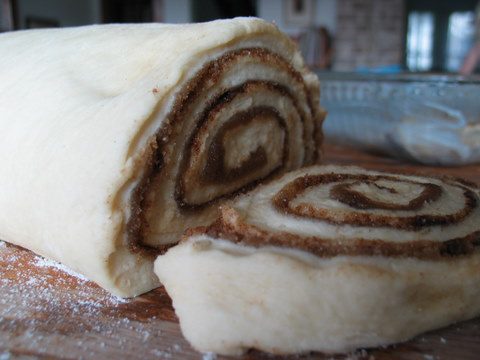 and lay them in greased baking pans that have sides. The sides are very important because the sugar and butter turns into a runny, sticky, bubbly syrup that you do not want dripping all over the floor of your oven and smoking up the house. 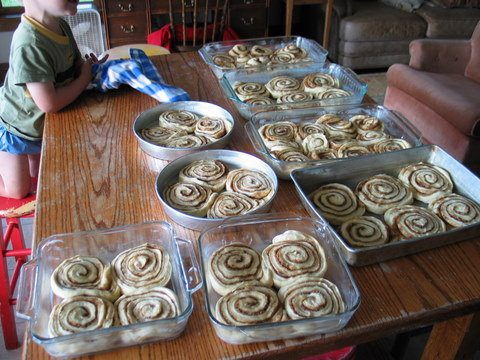 Cover the rolls with a towel and let rise till they’ve risen half of their original size. Preheat the oven to 325 degrees and bake them, a couple pans at a time, for 12-17 minutes. They should be lightly browned on the bottom and almost white on the top. 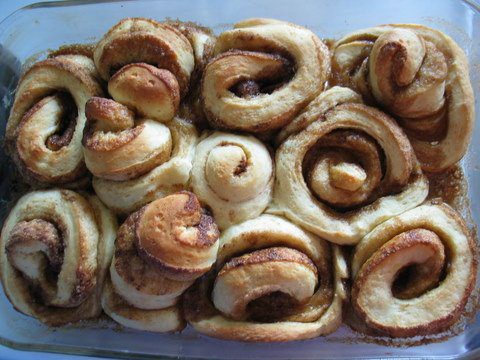 Remove the pans from the oven and let them cool for about five minutes before running a knife around the edge of the pans to loosen them. Dump them upside-down on a cooling rack, 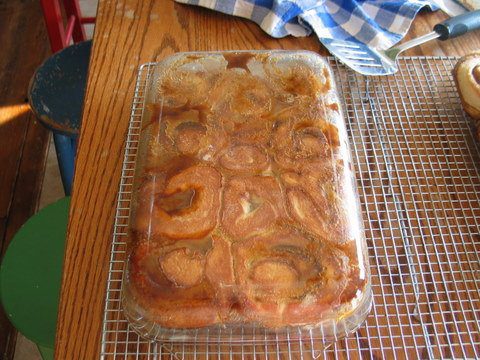 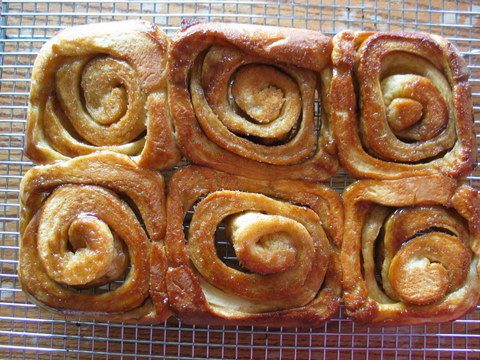 and then flip them over again so they are right-side up. 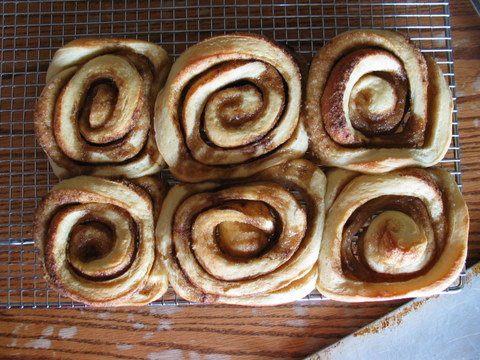 When they are totally cool, wrap them tightly in tinfoil, put them in large plastic bags, and stick them in the freezer. 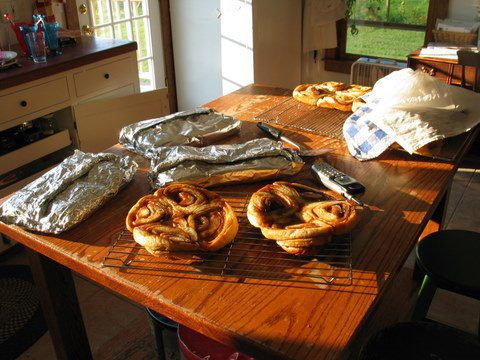 To thaw and serve: Remove the foil-wrapped rolls from the plastic bag and let them thaw on the counter for several hours or overnight. If you want to reheat them, put them, still wrapped in the foil, in a 300 degree oven for about 5-10 minutes. Take them out of the foil, lightly glaze them, and serve. 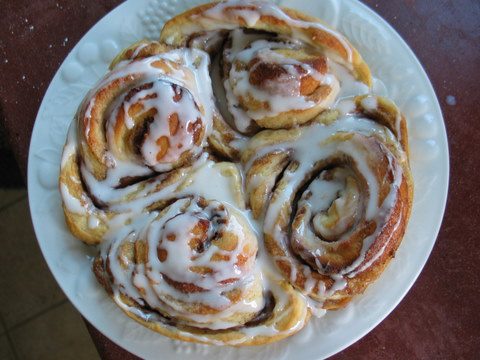 I don’t follow a recipe for my glaze. I simple put the powdered sugar, say three cups worth, in a bowl, add about ½ teaspoon of vanilla, and then add the milk, just a little at a time till I get the right consistency. I like my icing to be a runny (but not as runny as the donut glaze) so that I can drizzle, not spread, it over the rolls.

Other suggestions: try a butter frosting with a little extra milk, or the donut glaze with less milk, or add some cream cheese to the basic glaze for special kick.

Variations
*Orange-cinnamon sweet rolls: Add a couple tablespoons of orange zest to the cinnamon-sugar filling, and use orange juice in place of some, or all, of the milk when making the icing.

*Orange-cranberry sweet rolls: Along with the orange zest, add fresh cranberries that you have plumped up and sweetened by simmering in a sugar-water mixture.

*Add nuts and dried fruits, as the mood strikes. 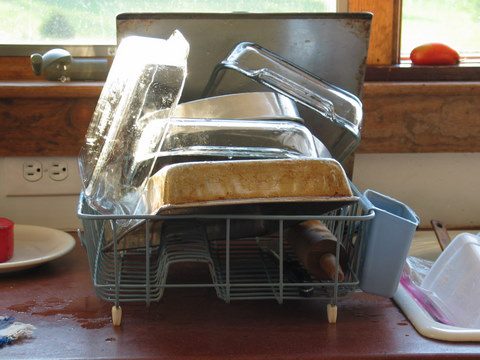