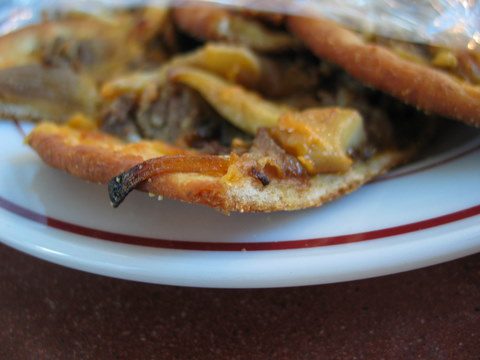 The other day when I was still on a zippy high after my foray into apples and rosemary, I created a new pizza. Now, I don’t know if much can be invented in the way of pizza what with the already too-many-to-count crust recipes and topping combinations, but I daresay that I have quite possibly chipped a little hole in the glass ceiling of pizza possibilities. Among the tools used to make that little hole were curried pumpkin, sausage, and apples.

This may look like a complicated recipe, but please do not be dismayed. There is lots of room for working ahead. And actually, I just created this dish at the last minute, off the top of my head, as I pulled the leftovers out of the refrigerator and freezer. I had the soup in the fridge and the browned sausage in the freezer and only had to caramelize the onion, grate the cheese, and saute the apples. So, make the soup for supper tonight, and then a couple days later (or months, if you freeze the leftovers), you can whip up this spanking new pizza.

I ate the leftover pizza for breakfast and lunch the following day, and, the day after that, for breakfast. I just kept the leftovers on a plate on the counter, no refrigeration necessary, and heated up each piece in the microwave for about 15 seconds. The leftovers were excellent on day two, but by day three the crust was getting a little soggy. 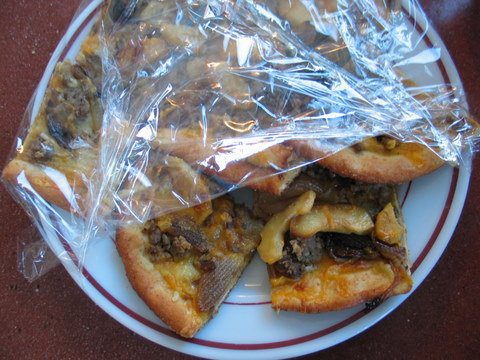 For the curried pumpkin soup:
Saute a chopped onion and some diced celery in some olive oil. Add 1-2 tablespoons curry powder. In a separate kettle, boil (in water) a large handful of unpeeled fingerling potatoes and 1 or 2 diced carrots. Add the drained, cooked veggies to the curry mixture. Add a couple cups of cooked pumpkin, and two or three cups of chicken broth (I used turkey gravy). Puree the whole mixture with your handy-dandy immersion blender. Add salt and pepper to taste, and a cup of cream or milk. Heat on medium-low heat. The soup should be fairly thick. 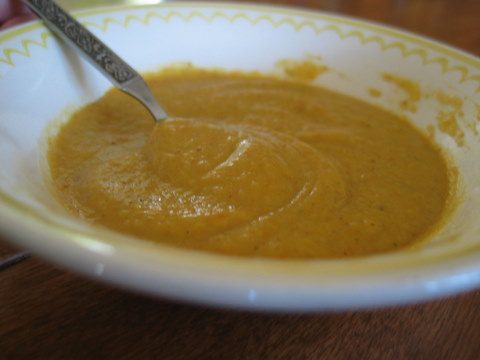 To serve, garnish with any of the following: yogurt, sour cream, grated cheese, chives, parsley. Make sure you reserve one cup of the soup, or divide the soup into one-cup containers and freeze, for the pizza recipe.

To assemble the pizza:
Saute the apples in a little butter till tender but still firm, about ten minutes. Set aside.

Saute the onion in some olive oil until dark, golden brown, about 20-30 minutes. (See here for more detailed instructions.) Set aside.

Roll/press out one large pizza crust (I divided the recipe of pizza dough into two balls and rolled the crusts out thin—one was for the kids’ cheese pizza and the other was for this recipe). Spread the curried pumpkin soup over the crust. Sprinkle on some of the grated cheese. Distribute the browned sausage, then the sauteed apples, and finally the caramelized onion. Sprinkle the remainder of the cheese over all, and bake at 450 degrees for 10-15 minutes.