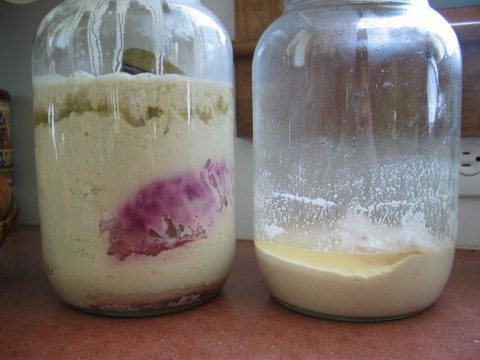 Chapter 7: All Over Again
Day 1, and Day 11: September 9, 2008
This is getting really confusing. Part One is done. Part Two has begun. But I’m fiddling with the starter from Part One (that’s the starter for Day 11) but I’m starting it back at the beginning, so it’s really also on Day 1, but with a little head start (maybe). I can’t keep this straight. Plus, I’m trying to organize this into the most readable fashion, but I’m not computer savvy I get really confused. I type these posts with a very scribbled-upon yellow notepad perched on my knee. Not to mention I have a slow internet connection. And it’s rainy outside.

Anyway, I’m not going to document the growth of the new starter like I did the first time around in Part One. I will be doing most everything the same, and I’ll let you know if I do anything different. I will take pictures occasionally, just so you can see how things are coming along.

Just for simplicity’s sake, we’ll refer to this brand new baby as Baby Number Two. The old baby that died, upon which I am attempting to miraculously revive, we will refer to as Baby Number One. The regeneration plan for Baby Number One is completely up in the air. I am not referring to any books or manuals—I’m just winging it. We will follow this baby more closely (for now) than the other.

Part Three will detail the makings of the breads. If we ever get there.

Is all this clear? Are you still with me? Hello? Hello?

Day 2, and Day 12: September 10, 2008
Twenty-four plus hours after beginning the new baby and it’s looking pretty good. The flour is bubbling up and the liquid is sinking down. I’m hopeful (or else a fool).

I wonder why I couldn’t make bread with it now. Why do I have to wait ten days to start regular feedings? Is it for the sour flavor? And what about just mixing wine with flour and water? Would that have the same effect?

The old baby, on the other hand, still looks rather dead. I’m ignoring it. 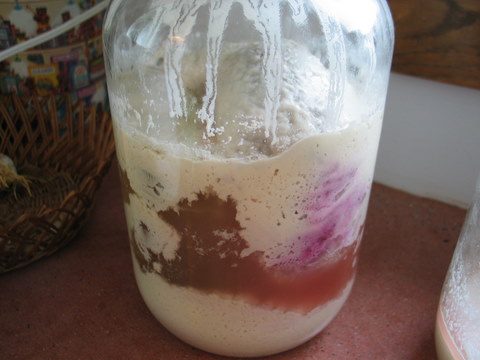 This new baby is going berserk. The bag of grapes is pushing up to the top, and the jar of water has been ousted from its King Of The Mountain position and has sunk to the bottom of the ar. It smells good, too.

The other baby is still there. The bag has inflated, and there is a bit of liquid sitting on top. That’s all. 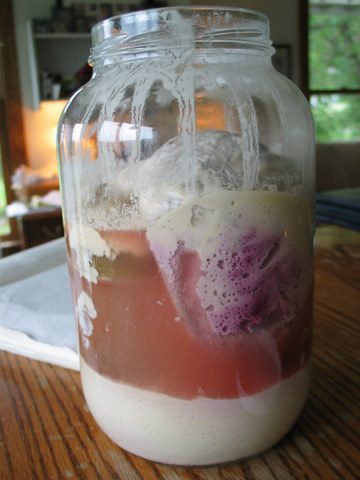 My Girlfriend Shannon visited me this morning. She took one look at my baby sitting on the counter and declared, “That is one ugly baby.” She’s right; it is hideous. 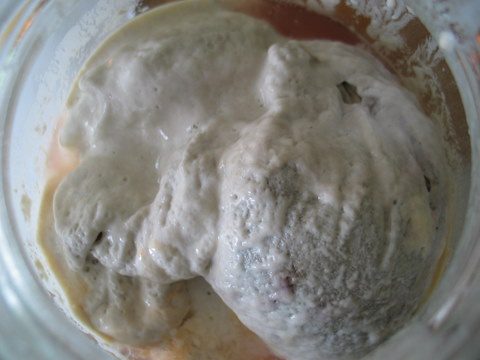 I fed both babies today. Baby Number Two got the requisite cup of water and cup of flour and a nice swishing. I pushed the sack of grapes to the bottom and pressed the pint jar of water down on top. Silverton says that you can use the starter to do some baking at this point, though she claims the flavor would be compromised. I’m pondering taking some starter out and getting it going on a regular feeding for several days. I’m dreading letting it sit for five whole days—it seems like that’s when it always goes kaput. 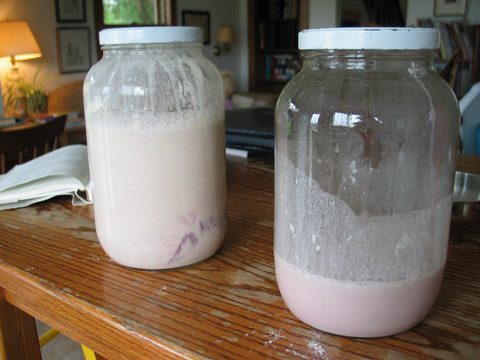 I’m not holding up to well emotionally. All this waiting and worrying is taking a toll on me. I just want to get past this part and on to baking bread. I hate this part. What makes me mad is that I’ve done it all before, so I know I can do it. It should be a simple matter—follow the instructions and make a starter, right? But this process is just not concrete enough. It’s eluding me, and I don’t like to be eluded.

Chapter 8: Playing Around
Day 5 and Day 15, September 13, 2008
Last night I did some on-line reading about sourdough starters. Most of the starters that used only water, flour, and grapes have a very similar start-up process as Silverton’s. The variations were minor: one said to start regular feedings on Day Eight, another said that you could start baking right away once you start regular feedings (Silverton says to wait for five more days to get the starter well-established and strong), another said to only feed the baby twice a day, and yet another explained how to make the starter with just water and flour. All of the directions made the whole process seem simple, so either the authors are all very devious, or I’m just dense. In any case, it was good for me to see the possible variations in the process. I began to see that it just might not be an all or nothing proposition.

So this morning I took Baby Number One and removed its placenta, I mean, it’s bag of grapes. I put one cup of the rosy pink starter in a gallon jar and fed it some flour and water (same portions as before). I’m going to continue to feed this baby for several days to see if anything new develops. It had a nice tangy odor this morning, so just maybe… 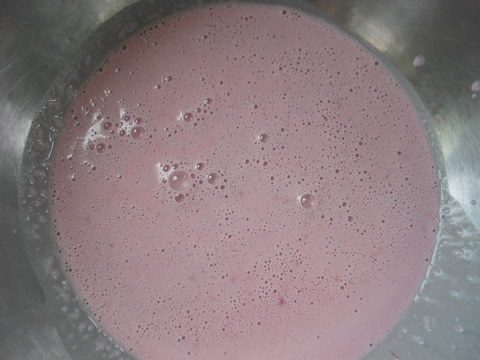 Baby Number Two is busy fermenting. The bag of grapes is hugely swollen. 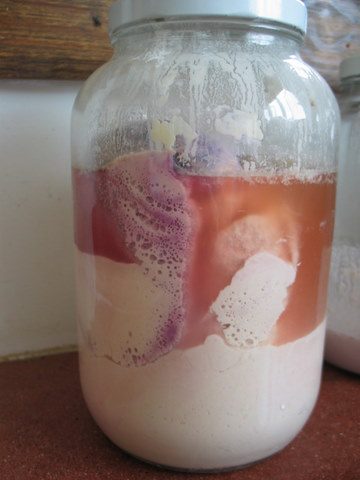 I think Hope is hiding out in there.

Day 7 and Day 17, September 15, 2008
I don’t want to jinx myself or Baby Number One. I’m scared to say it, but I need to, I think. I feel the words and emotions burbling around down in the bottom of my throat. I’m afraid I might blow… MY BABY IS ALIVE!!!

Goodness! I did blow!

Now, let’s not talk about it anymore. I’m doing some psychological tiptoeing. In other words, I’m feeling fearful, nervous, superstitious and excited.

Note: I am trashing this odd way of posting that I’ve developed. I was intending it to read like a story, but it is getting too cumbersome for me to scroll all over the place and do all that cutting and pasting. So from now on, I’ll just be posting like this is a normal blog. Parts One and Two will still be as there in the archives, just the way they are in their tediously long narrative format.