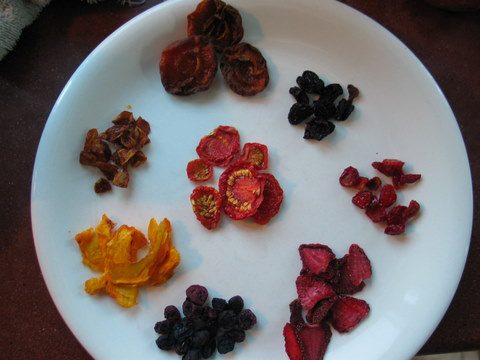 My sister-in-law Sarah asked me how I like my food dryer. Let me tell you: I love it.

Clockwise, from top: Apricot Ears, Sweet Cherries, Sour Cherries, Strawberries, Blueberries, Peaches, Wax Cherries, and in the center, Cherry Tomatoes
My mother-in-law, who from now on and henceforth will, at least in this blog, be referred to as The Grand Matriarch (she has nine children, seven of which are boys, so everybody doff your hats and curtsey in her general direction, please) bought it for our birthday (or was it Christmas?) present last year. She ordered the large food dehydrator from Lehman’s Hardware (see it here). We got it just in time to dry apples, and so we dried lots of apples. Lots and lots of apples. And then we gobbled them all up. Mr. Handsome loves them for snacks, as do the kids. I was thinking I might try making an apple snitz (schnitz?) pie or something, but I didn’t get around to it in time.

So far this year I have dried blueberries, sour cherries, sweet cherries, wax cherries, apricots, peaches, cherry tomatoes, and strawberries. When I find bananas really cheap, I buy them and dry them up, too (but I haven’t seen any cheap bananas for quite some time).

The dryer, though compact and efficient, still takes up a good deal of room, so we kept it in the downstairs bedroom (which is actually not a bedroom) until Mr. Handsome built me this nifty counter in the back hall. 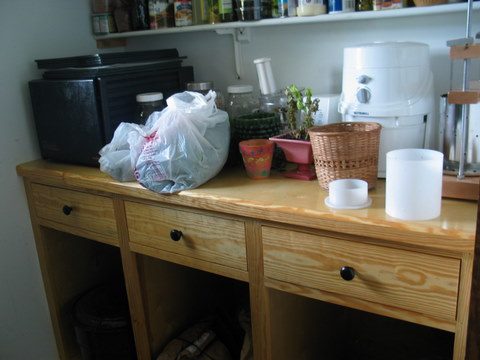 Now my (our) dryer has a permanent perch. The dryer makes a steady, quiet hum while it is running. The noise bothered me some when it was in our kitchen for a short while, but now that it’s out there in the back hall I don’t even think about it. The smell of drying fruit is delicious, at times even overriding the scent of musty shoes that sit on their shelving unit on the other wall opposite the dryer. It’s a cinch to clean up; I just wash the plastic mats in the bathtub. That’s about it for dehydrator information.

Oh, one other thing. I know some people are concerned about how cost-efficient food dehydrators are. I’m a bad one for facts, but in the little manual that The Great Matriarch sent with the dehydrator, it had a chart that compared the cost of freezing, canning, and dehydrating foods. Dehydrating was cheapest and most efficient (naturally, as it was a manual for a food dehydrator, after all). Now, I do keep my dried foods in jars in the freezer because I don’t want to risk them rotting, but they don’t take up much space in comparison to non-dried foods, so while the cost is probably higher, it’s still worth it in my mind. And anyway, I’m not drying food for economy’s sake—I’m doing it all for flavor.)

Here’s how you go about drying some different foods.

For the strawberries, I slice them into a bowl, sprinkle them with a couple tablespoons of sugar, and then lay them out on the trays. The sugar enhances the flavor just a tad. 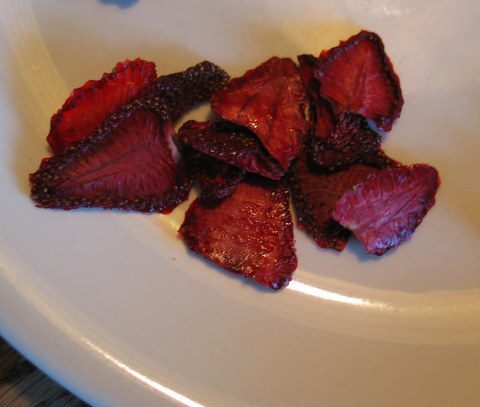 All three kinds of cherries, sweet, wax, and sour, I pit and cut in half before laying out on the trays. I only sweeten the sour cherries, the same way I do the strawberries. 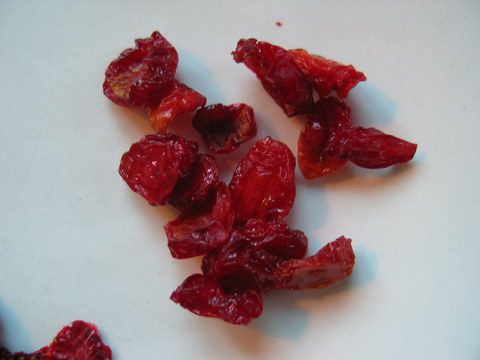 Apricots just need to be cut in half and pitted, not peeled, but they do taste a bit acidic. I consulted with my Aunt Valerie over the acidity problem. She declared that they will undergo some mysterious chemical transformation and come wintertime they won’t draw your mouth nearly so much, but I wasn’t hedging my bets on any mysterious chemical transformations—I baptized my next batch with a dainty sprinkling of sugar. (Aunt Valerie says my Uncle Jim refers to dried apricots as “ears”, as in “I gotta go eat some more ears”.) 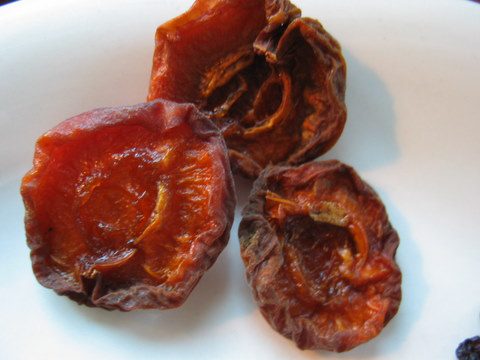 Blueberries are more labor intensive, but oh my, they are worth it. Plunge the fresh berries in boiling water for about 20 seconds to soften their skins, drain them, and lay them out on the trays. They take a long time to dry, a couple days, and some of them stay all puffed up, so towards the end of the drying process I go over them with a toothpick, popping the ones that are still swollen. 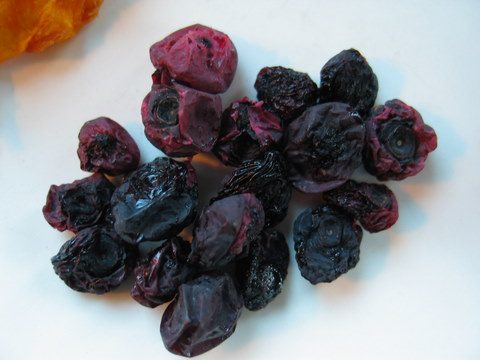 I’ve talked about peaches before. Just pit, peel, and slice, as if you’re going to make a pie. 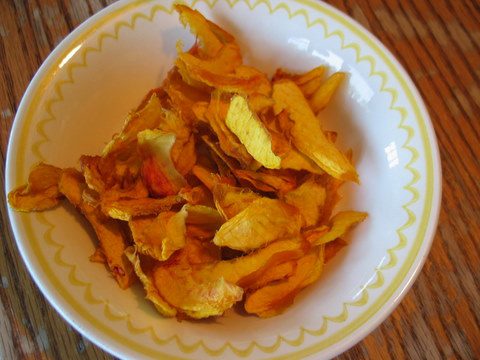 Cherry tomatoes were an experiment. I just cut them in half. I’m not sure what to do with them, maybe just throw them in a soup? Anybody have some firsthand experience with dehydrated tomatoes? I’d sure love to hear from you. 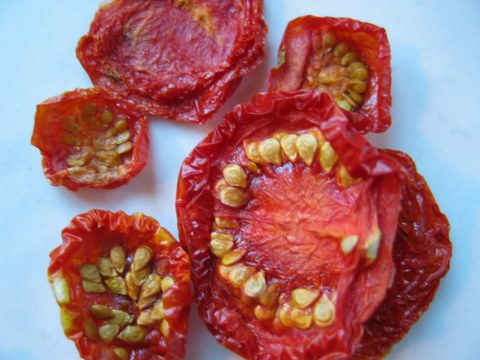 I also dry my oregano and sage in the dehydrator. I’d do my own raisins if I could get seedless grapes around here. Come fall, we’ll be doing up a bunch more apples.

I hope this helps, Sarah. Kind of a long and windy answer, but you’ve known me for a good dozen years, so I guess you knew what was coming when you shot me the question.

Any more questions? Anyone????