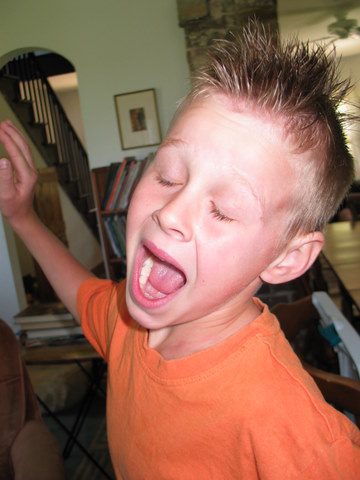 I don’t consider myself a Fun Mom. I don’t play games with my kids; I don’t laugh at all their jokes. I say no a lot. I have lots of rules. I demand manners. I make them do work (at least I try to—this is a hot topic, ie. I’m constantly pulling my hair out over this one, and I’ll blog more about it later). I don’t have body piercings, wear a bikini, drive a flashy car, etc. In other words, I’m traditional and boring.

But when Yo-Yo Boy asked for a Mohawk, I said yes.

I may not have said yes if I hadn’t lived through the whole Mohawk craze, twenty years ago, a la my brother. The one that’s now bald. That brother begged and pleaded for a Mohawk. He made a sign and hung it on his door: The Mohawk War. All to no avail. My mother later admitted that she should have let him have one. What could it hurt? And now it’s too late.

I buzzed the sides of Yo-Yo Boy’s head and then used mousse and manipulator to make the middle part stand up. 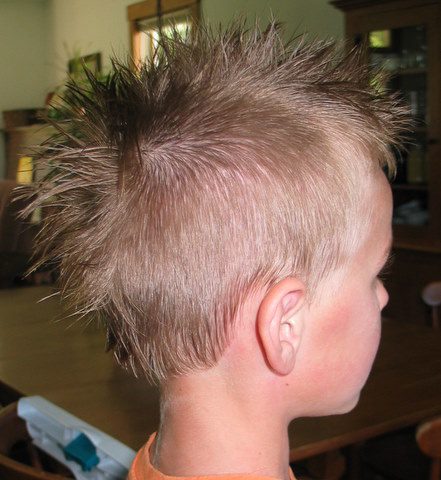 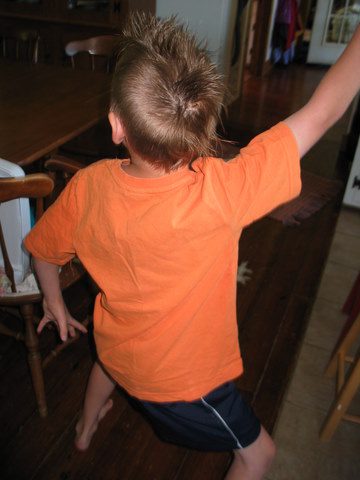 I spiked his hair for church on Sunday (it wasn’t till we got there that I realized how much the hair stood out) and when he went to the dentist and to a friend’s house. But after a week or so, he started saying no when I offered to fix it. He said he didn’t like it that he couldn’t lay his head back… And that was pretty much that. He hasn’t spiked it for several weeks and now the sides have grown out and he just looks like he has a butch haircut.

I’m rather sad to see the end of the Mohawk. Yo-Yo Boy’s ability to go out in public like that was kind of beguiling and sweet.

However, yesterday he went to Bible school, intentionally wearing one brown sock and one black sock, and this morning he used a flashy gold belt from the dress-up trunk (I held my tongue and didn’t let on that it was a girl’s belt) to hold up his pants, so I have an uncomfortable feeling that over the next ten years he will present me with many opportunities to be strict and boring. But when he does, I’ll be able to point out that I was a Fun Mom. At least once, anyway.